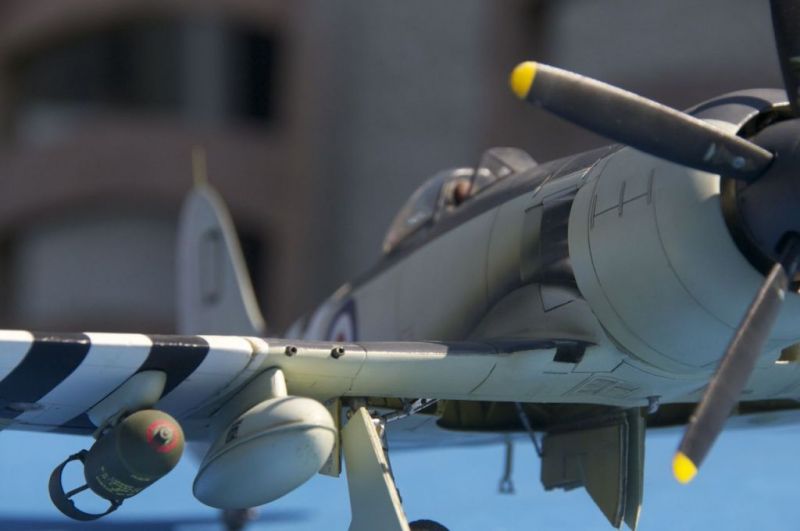 I originally bought my first Fisher Sea Fury when Paul Fisher first announced it and it arrived several weeks after orders started shipping.

I have always loved the Sea Fury and have been lucky to see the Royal Navy Historic Flight with their restored Sea Fury many times.

The first thing that many of you will be aware of already is that Paul builds his own kits and then writes the instructions. The net effect of this is that you the builder get lots of great tips on how to get the best out of your model.

Fisher models are also unusual in that there is actually very little clean up of parts – none of those large, hard to removed resin molding blocks you see on Aires resin for example.

I started with the cockpit, which is a work of art mastered by Roy Sutherland. At the time I build this model I was not a big fan of scale black and using many shades of grey – I have since changed my mind on this subject. 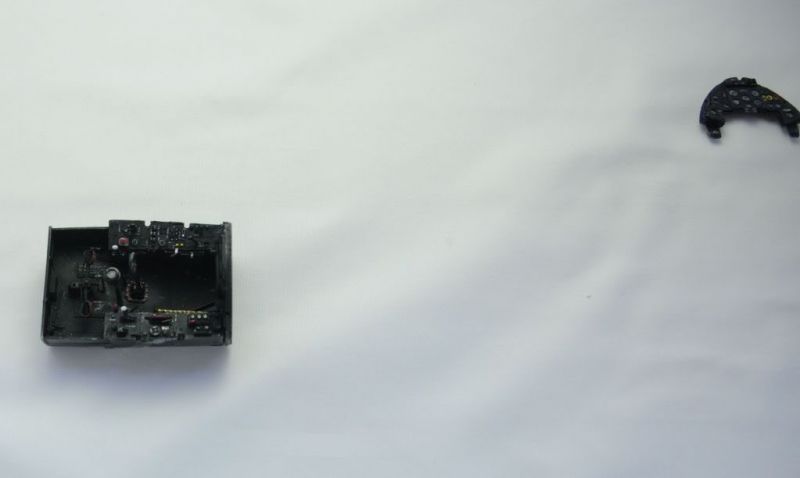 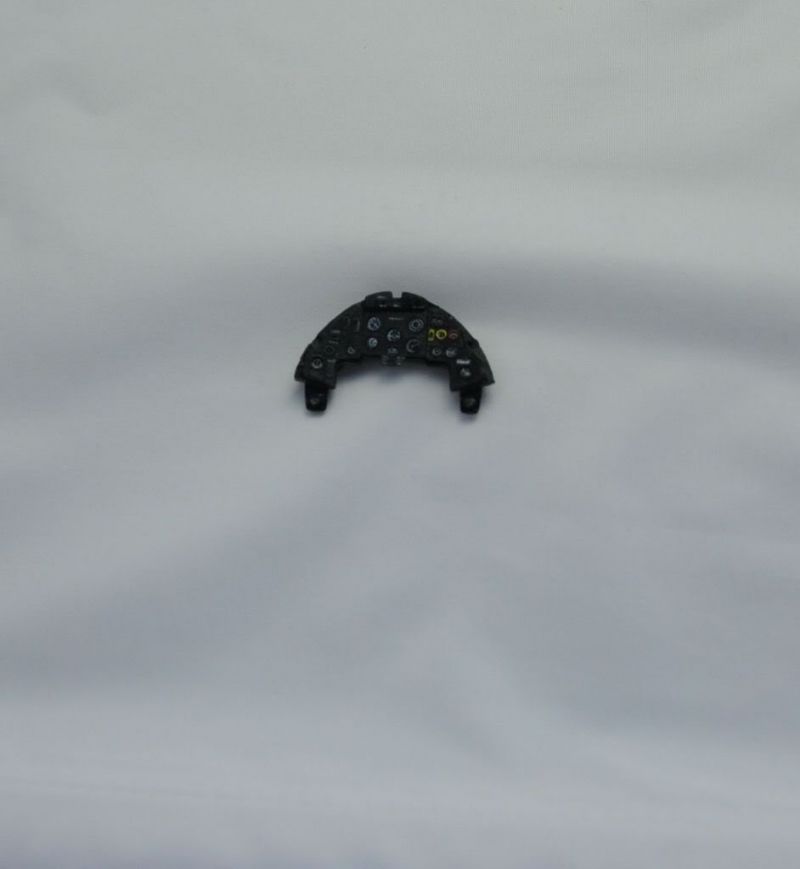 I added a few additional details that I gleaned from the Pilot notes and I also contacted the Fleet Air Arm Museum in Yeovilton when I got some great help – particularly on the colour of the seat cushion etc based on un-restored examples at the museum. 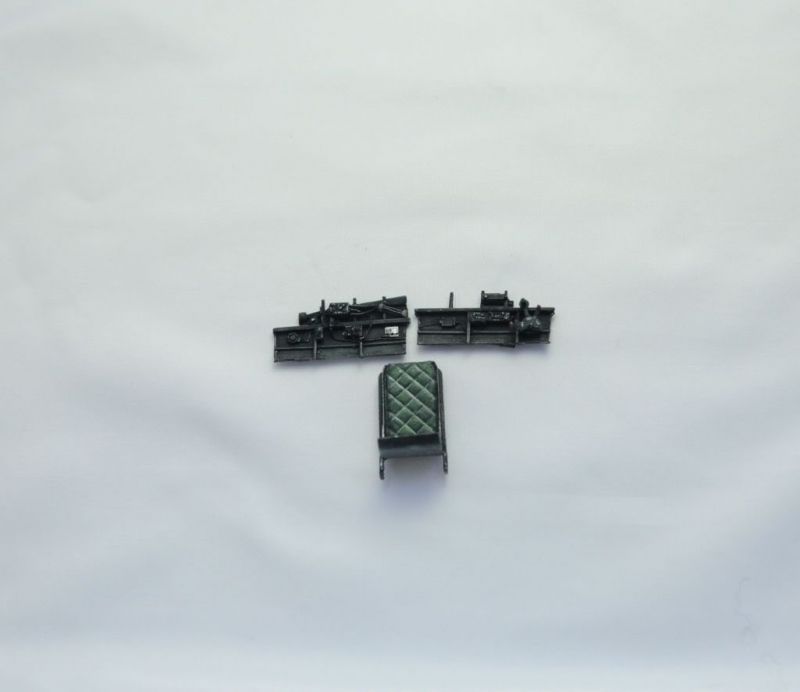 Once I had finished the cockpit it was soon inserted in the fuselage and most of the lovely detail promptly disappeared! 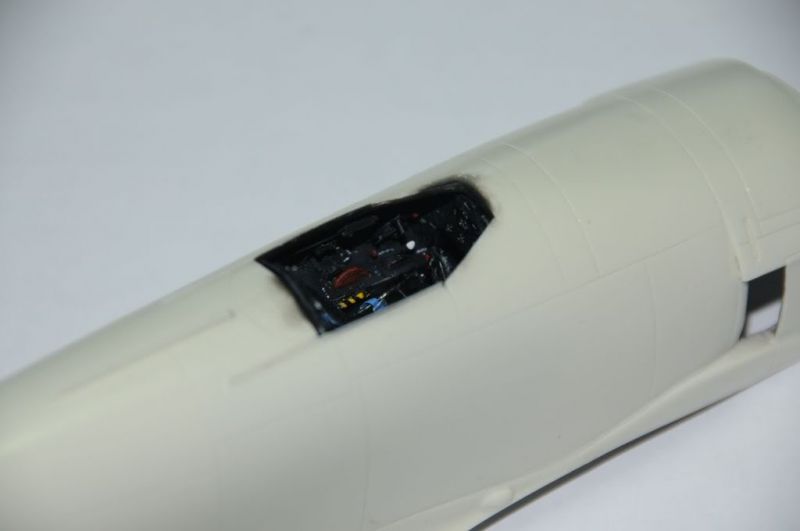 At this point the model was put away for a year or so and in that time Paul Fisher announced and easier way of doing the folded wings. At that point I immediately ordered a set along with a two seat Sea Fury and another single seat Sea Fury (the £ was very strong against the dollar at that time ☺). The folded wings would come back to haunt me later!

Once the wings where fitted with very little filler on the top surface but it did require some blending underneath. To be fair not more than 5 minutes work with sanding. For this I used Milliput.

Now it was into the paint shop ready to be painted with my then new Iwata Micron C airbrush and the wonderful Gunze Sangyo paints. For me their FAA colours are perfect in this scale and airbrush beautifully and dry to a very hard shell.

Although the Sea Fury was kept pretty clean when seen in the UK no aircraft exterior survives both prolonged periods at sea and combined with wartime usage. As I was modeling Carmichael's famous MIG Killer I reasoned that there would be some limited chipping to the panel around the most common access points etc. As the Sea Fury was coated in Yellow Chromate during manufacture as a preventive measure against the use at sea the model was sprayed at various points with Gunze Sangyo Yellow chromate. Whilst this would show I did not show any bare metal as I reasoned that this would be jumped on due to corrosion in a hostile seawater environment. 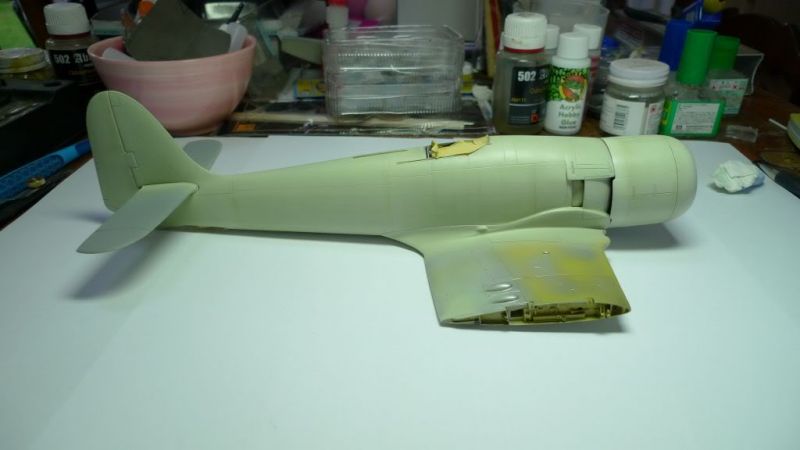 To break up the monotony of the finish I attempted to use these effects: 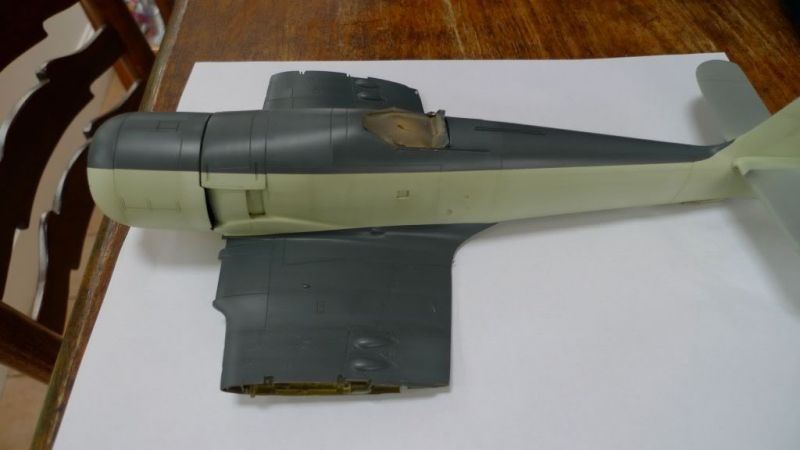 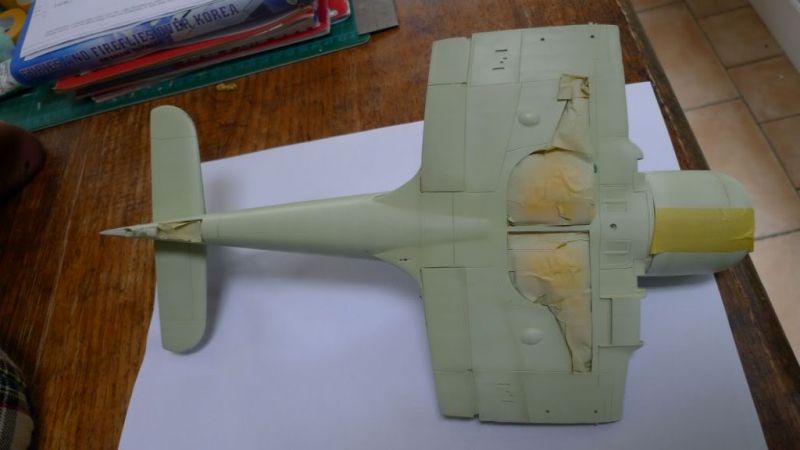 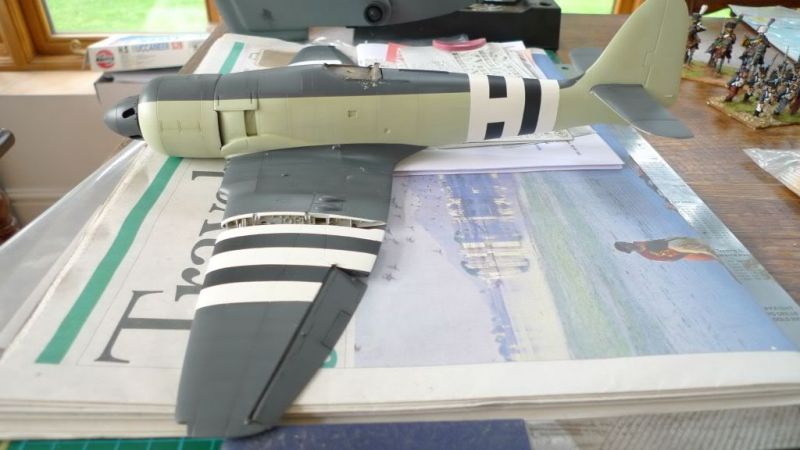 I was very pleased with how the airframe paintwork turned out but now realized that I should have used Future and applied the decals before doing all of this – schoolboy error. Now I realized I was going to have to do something else to stop the decals silvering. I received some great advice that by using thinned white glue under the decal you would get no silvering and the decal would snuggle down around the panel lines etc. I tried this and by and large it worked very well. 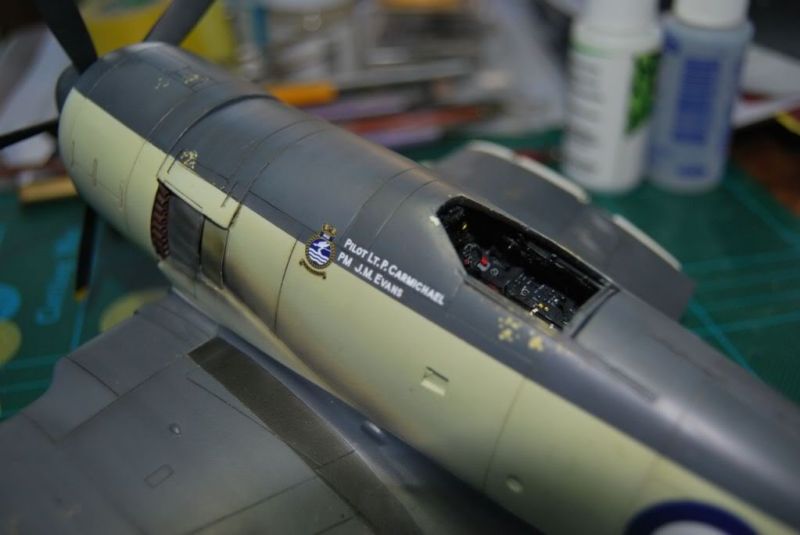 My next challenge was emulating the very distinctive exhaust staining as seen on the Sea Fury. This is an area where my only previous experience was on the MDC Hawker Typhoon where the exhaust staining was much easier to emulate. Using some great shots of the Royal Navy Historic Flight Sea Fury I went to town with a mixture of Tamiya paints – browns, greys and blacks. As always the first side I tried it on did not work out so I had to re spray a major part of the fuselage and start again. Once I had it cracked I moved to the other side of the fuselage without any major issues. 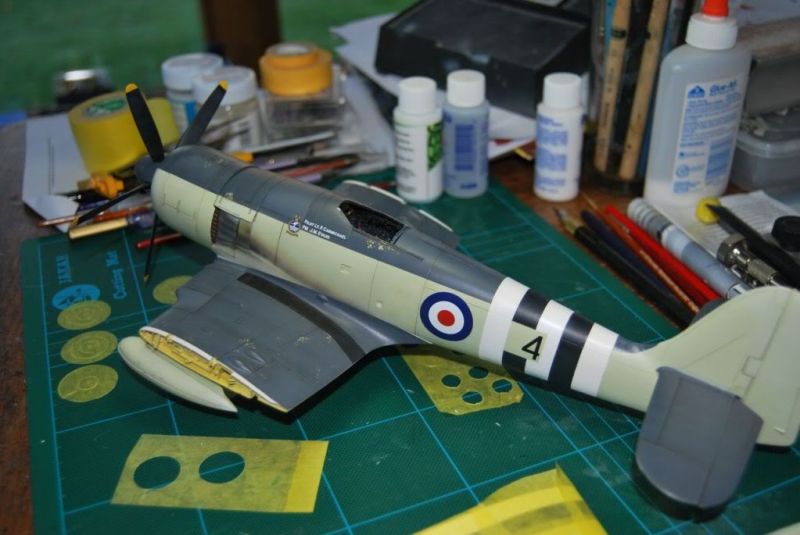 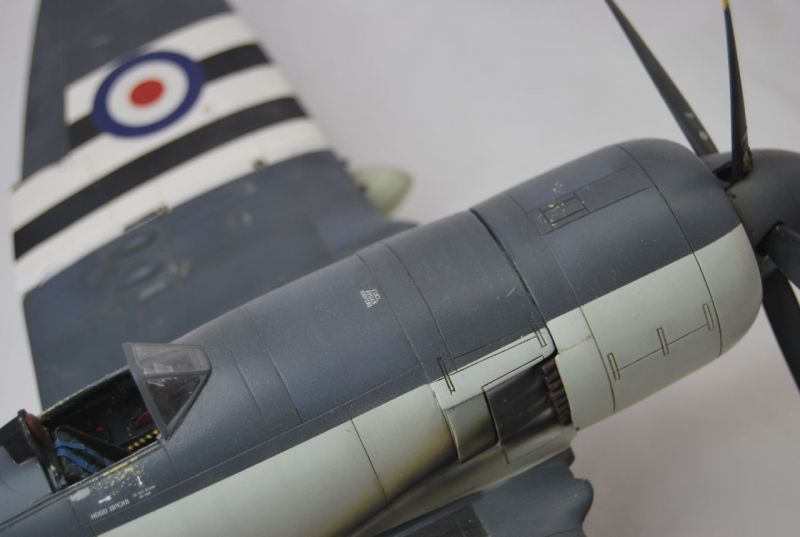 I am actually very pleased with the result as it actually looks very close to the in air shots of the Sea Fury.

Now I was close to final assembly and I decided that I actually much preferred the wings down – and here in lies a major problem. I thought I could just attach the folded wings in the down position and the issue would go away however the flaps are molded down for the wing fold (which is correct) when in fact when the wings are down they would be…Oh well live and learn!

How I just needed to fit all of the external details, bombs, whip aerials landing gear and the model was complete – but not before I broke the pitot tube off on the LH wing before I even took any photographs! 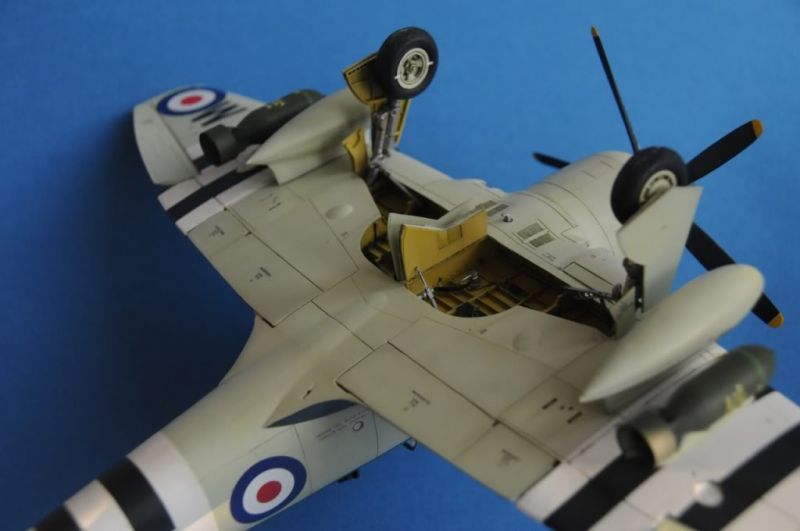 In conclusion the Fisher Sea Fury is a beautiful Now I just need to finish the T-20 two seat trainer variant.