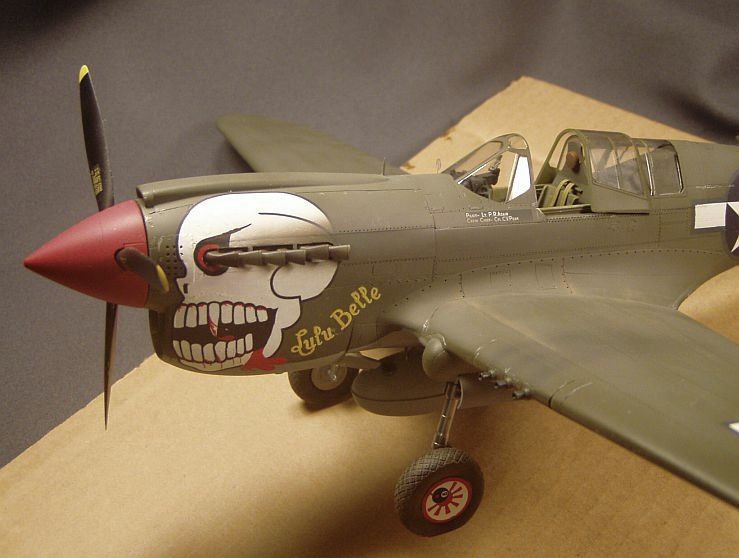 Finished this one tonight. I used Fundekals for the markings except for the stars and bars which came from my spares box. Fundekals stars and bars have the red surround which looks great but, I think, is incorrect for "Lulu Belle" #2. After looking at numerous photos of this a/c and others from the 80th FG during this time period I decided that it probably did have the red surround at one time but it had been painted out when the photos that come with the decals and the ones I found on line were taken. I painted the area where the red would have been with some Model Master Sea Blue. Also, "Lulu Belle" was white on the decal sheet. I found a couple of photos that clearly show a contrast with the name and the white on the skull art. So I decided it was very probably yellow. I carefully overpainted the decals in yellow which was a bit tedious. (I also found a colorized photo that showed the name in white but as it was colorized I decided it was incorrect.) As most 80th FG P-40N's at that time were involved primarily with ground support and had field mod. bomb racks installed under the wings I scratch built some and glued them in place. The wheels and prop blades are from Eclipse Model Design, the cockpit is a mixture of the Black Box set for the "E" and kit parts that are needed for a "N". I used Xtracolor paints for the camouflage colors. Model Master and Humbrol for other areas. I hope you like it! 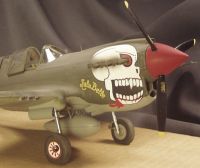 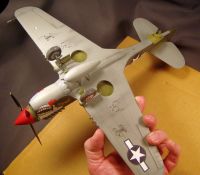