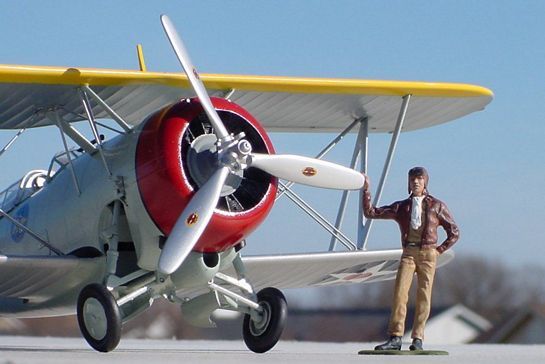 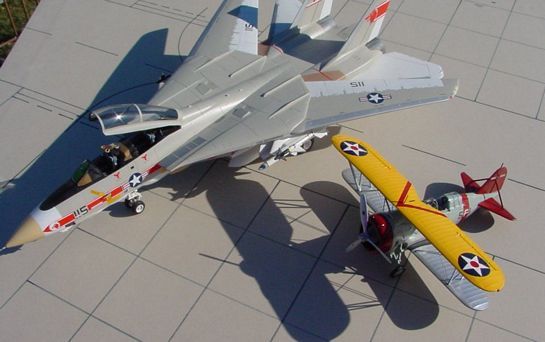 Grumman's F3F was the last biplane fighter to enter service with the US Navy and Marine Corps. With a top speed of 264 mph it was the fastest ship borne plane in the world. The last of the F3F series, the -3 was the most powerful. It was virtually identical to the F3F-2 but it had the more powerful Wright Cyclone engine. 23 F3F-3s were delivered in 1938. Many remained in front line service until 1940 when the F4F Wildcat replaced them. Even thought they weren't on the front lines they still served at Naval Air Stations for many more years during the war. 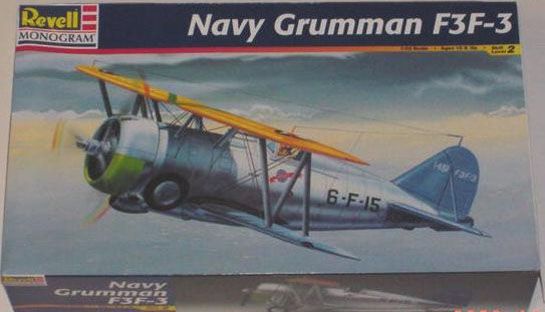 This is one of Monogram's classics. I think it was issued somewhere around 1965. When it was introduced in the sixties it was considered state of the art. However, by today's standards the kit appears quite dated. One of the unique features of this particular model was functional landing gear. It seems most kits of the time had operating features in order to sell them and entice young modelers into building them. Overall this is not a bad kit. Ejector pin marks abound, especially on the landing gear parts. The fuse, however, nicely done with raised lines and rivets. The wings have the simulated ribbing as well do the tail control surfaces. The kit even comes with a standing pilot figure. This is due to the fact that the Grumman F3F was initially offered as the Gulfhawk; a civilian version of the F3F owned by the Gulf oil company and piloted by Al Williams at airshows all across the country. 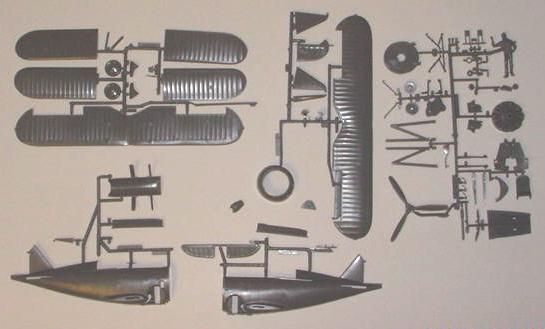 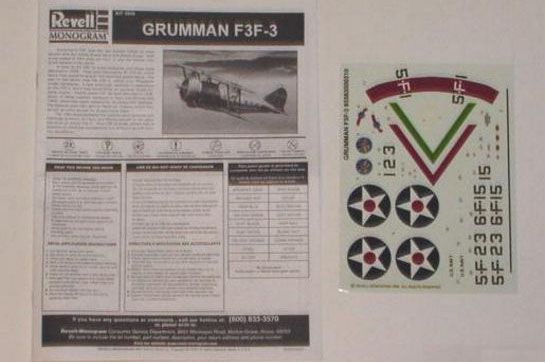 One of the things I did was add a bit of extra detail to the cockpit. I had very few photos to go by. My only real source of reference was the Grumman Biplanes in-action book by Squadron. I added some rivet detail to the seat using drops of CA and an oxygen bottle made from bits of sprue and styrene rod. The instrument panel is a decal. I thought about drilling holes for gauges and bezels and the works but decided against it. Too much work for me. I did add a raised center section where the primary gauges are like the real version. To me the decal panel looks acceptable. I added some extra detail to the side walls and side consoles as well using styrene. The inside was painted aluminum since most aircraft of this era didn't have primer applied. 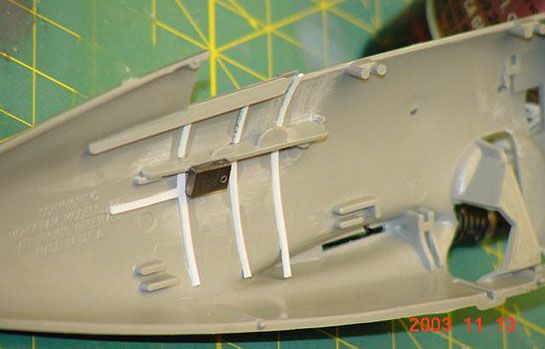 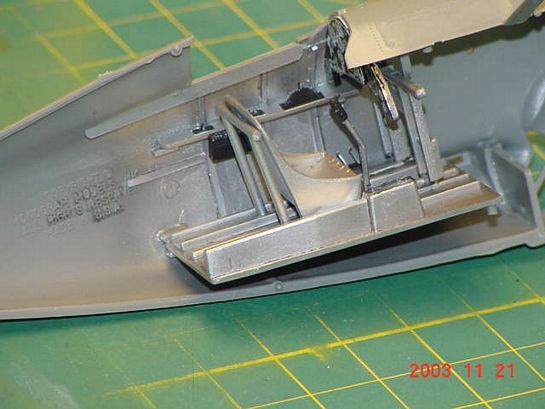 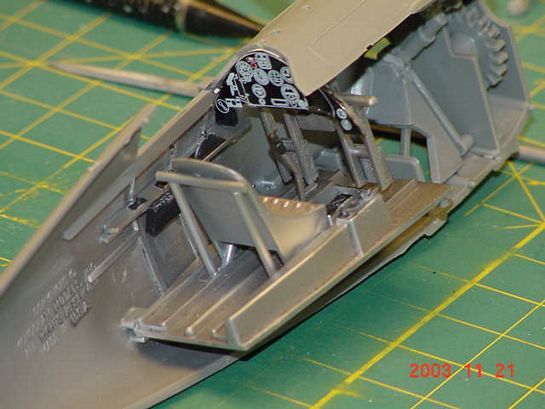 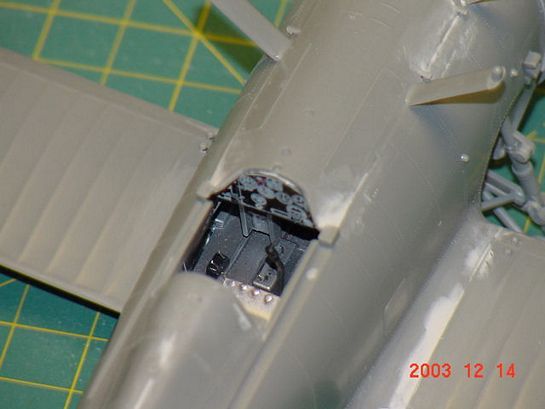 I wanted fully functioning landing gear just as the kit intended so I took my time and cleaned up all the gear parts and filled all the ejector pin marks. And let me tell you, there were a lot of them. It takes a fine application of the solvent brush to make sure no excess glue doesn't get where it's not supposed to in order for the gear to operate. If you take your time and work through each step before gluing you can have fully functional gear. The gear is operated by the propeller. You pull on the prop to engage the gear then turn clockwise to retract it. Turning the opposite way extends the gear. The prop only needs to rotate a few revolutions to extend and lower the gear and when you reach the end of travel just push the prop in to disengage the gear so the prop will spin freely. You'll notice a gear sector sticking out of the fuse side near the cowl. This is really unavoidable when having operating gear due to the geometry of the linkages. If you decided to build the model with the gear fixed you could plug and putty the opening. The tail wheel is a one piece unit and is retractable as well. 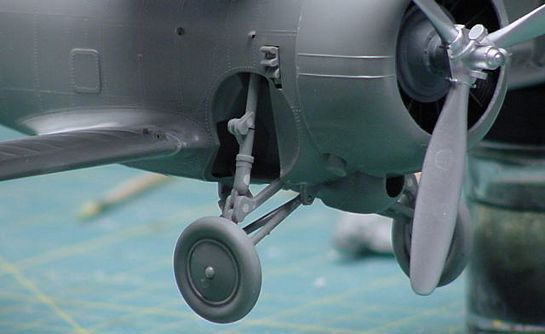 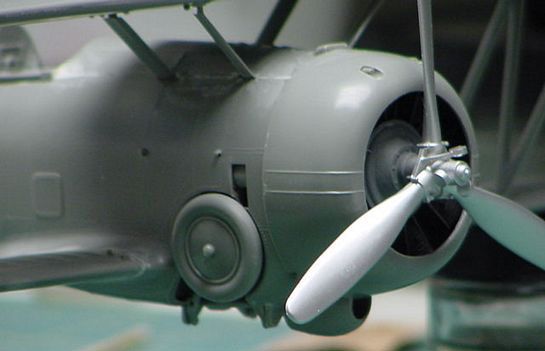 The rest of the model build up fairly conventionally. The control surfaces are designed to move so I made mine moveable. There is lots of seam sanding to get things looking good so be prepared. The molds for this kit are definitely showing their age. The engine is molded onto the firewall. You can only see the front of it so a complete engine isn't really necessary. The detail on it is very basic. I painted it and drybrushed the highlights then gave a light wash to bring out some other details. You could add more detailing if you prefer but once again I wasn't going that far. The propeller is rather nicely done with the counterweights and all. There are a few sink marks on the backs of the blades to contend with but nothing major.

The lower wing to fuse joint is probably the worst fit of the whole kit and I spent a bit more time here. I puttied a little bit at a time then sanded. I kept repeating until it looked satisfactory. I left the upper wing off after assembling it for painting reasons. This biplane has a lot of colors plus it's a biplane. Different painting techniques are called for. Once the lower wings were on and the tail feathers in place it was time for paint. I like to leave my props off for painting but in this case I could not. In order for the gear to function the prop had to be glued to the prop/gear shaft. If it wasn't the prop shaft would fall inside the model and be irretrievable. This added a measure of difficulty to paint operations. Because of this the prop was painted first with MM aluminum. It was then assembled to the shaft, the gear was tested then the prop was masked. I also masked off the inside of the cowl to protect the painted engine. 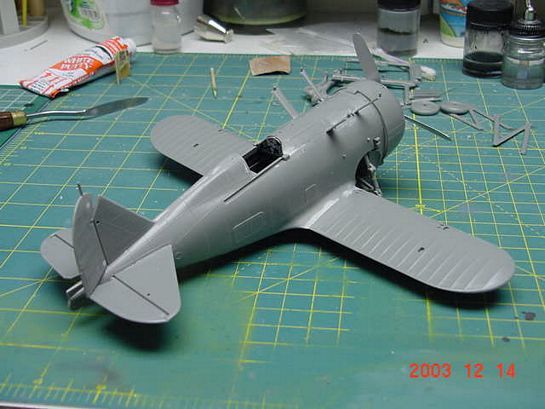 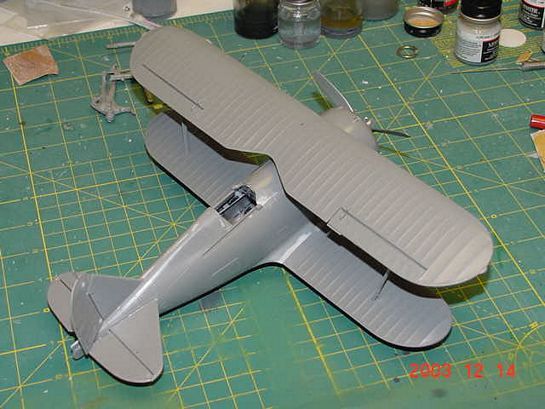 Most between the war bipes had silver dope applied to the wings. The F3F was no exception. Once the model was primed the lower wings and bottom of the top wing were painted with Krylon's silver. This is an excellent silver metallic paint with great coverage properties. The top of the top wing was then painted with white primer. The white primer is necessary because Insignia Yellow (and most yellows for that matter) is very transparent. If you tried to spray the yellow over grey primer it would not look as bright and you'd need a thousand coats to get the density right. The lower wings were masked off and the fuse was painted with MM aircraft grey. This is a gloss coat so it took longer to dry. Then the tail surfaces and cowl were masked for the insignia red. And lastly the wing roots were masked for the black. Whew! A lot of masking and painting. All the masking was removed and everything was given a coat of clear lacquer in preparation for decals. But before the decals can go on we need to assemble the upper wing and 'N' struts. The wing and 'N'struts went together very nicely and everything was in alignment. Monogram provides a unique way to do the flying wire rigging. There are small molded tabs that fishing line is designed to loop around for the threading portion. The instructions show the proper sequence to do everything. When it comes to rigging biplanes I am a complete incompetent. I tried the kits method and it didn't work very well for me. Finally I got so disgusted I cut off the nubs and used a combination of strip styrene and .020" music wire. It went much better my way. 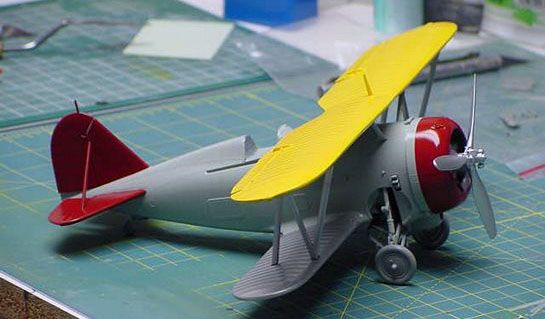 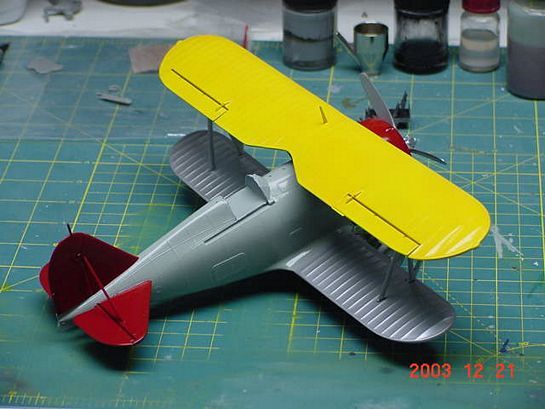 Now it was time for markings. The kit decals were used. I don't know of any aftermarket one available. The kit decals were excellent and fit very well. They did need some strong setting solution to get them to conform to the surface details on the fuse. The color scheme and markings represent the squadron commander's aircraft from VF-5 assigned to the USS Yorktown, November 1939, San Diego, California. 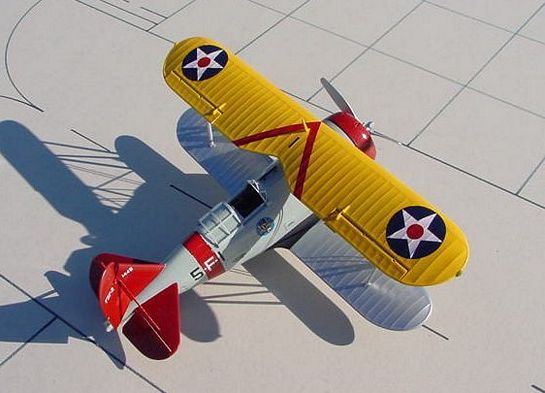 There are a few details left. The canopy side rails need a lot of work. If you use them straight from the kit they look very 'clunky and chunky' and totally out of scale. Once I glued them in place on the canopy I protected the clear parts and filed them down to match the contour of the canopy. They look much more scale now. The canopy was then masked and sprayed with aircraft grey. Once dry it was demasked and put in place. It's designed to slide back and forth so no glue was needed. The tubular gunsight was cleaned up and painted black then glued in place. The wheels were last. In order to get them to fit with them retracted I raised the gear then put them in place on the axle. The kit has you heat a screwdriver and flatten the excess axle protruding so the wheels can turn. That looks bad and never works very well. I marked the axle instead and cut off the excess then glued the wheels in place. 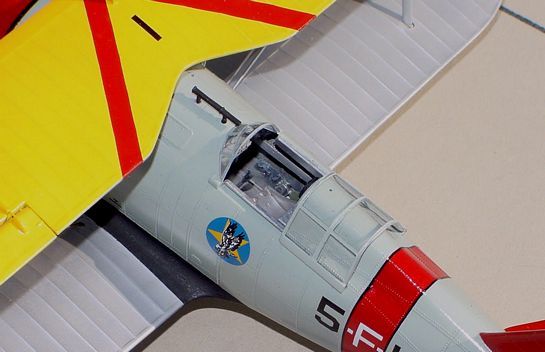 The plane itself was now done. Determined to use all the parts in the box all that was left was the Al Williams figure. I cleaned up the seam lines on him and filled the ejector pin marks. After more sanding and scraping he was glued to his base. Now figure painting is not my forte but I gave it my best shot. Al's wearing basic Khakis and a leather jacket and flying helmet. Not to many colors. I used a little bit darker than normal skin tone so my Al has a tan. I gave the figure a thin wash with black paint to bring out some highlights. He may not win a beauty contest but he looks O.K. 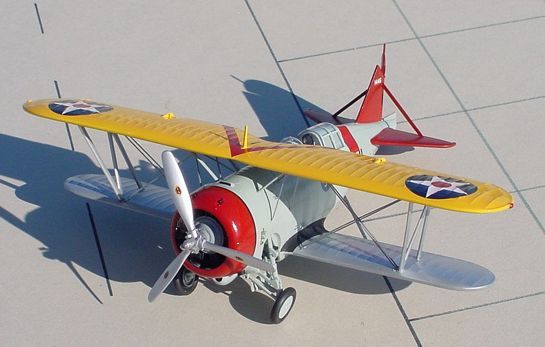 And there you have it. A 35+ year old kit. While it's not up to the standards of today's Hasegawa or Tamiya offerings it still proves you can build a nice model from some of the old classics. A bit of patience and determination is all that's needed. 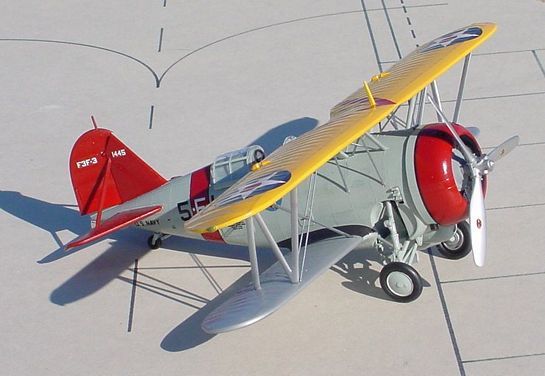