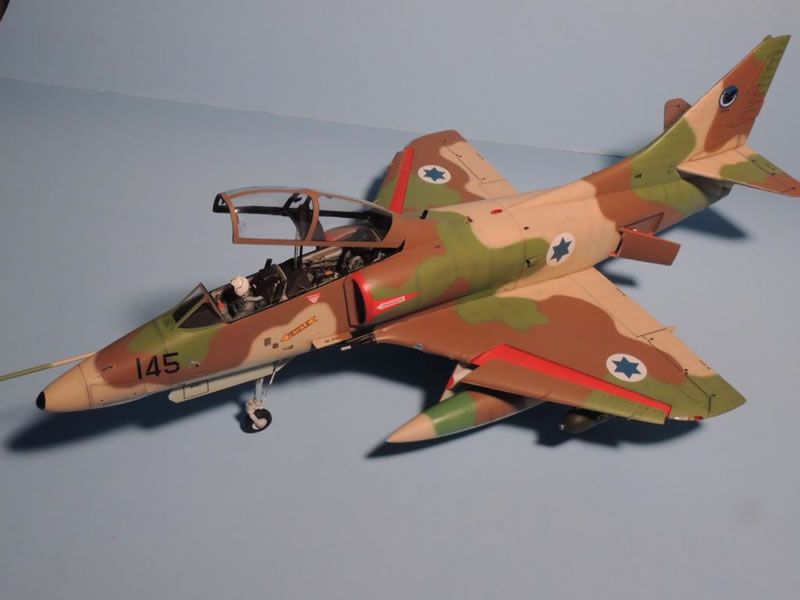 I had built the Hasegawa A-4E/F a couple of times before so I felt comfortable jumping into this project without reservations. The quality of the molding is 1970s standard but quite good for the time. Certainly not as detailed as the Trumpeter releases of a couple of years ago but less than half the cost. A pleasant surprise for me was that the TA-4 fuselage parts were inscribed with more recessed panel detail than the single seat versions and well above average in detail and quality. My intention for this build was to create a model of the TA-4H serving in the IDFAF during the Yom Kippur war of 1973. As this war brought to light the deadly efficiency of Man portable shoulder fired weapons my Skyhawk would not have the extended tailpipe or the 30mm cannons. The IAF ordered a particular antenna modification from Douglas aircraft which changed the shape of the top leading edge of the vertical tail plane. This would need to be added to give this build some character. To start, I added some lead shot to the nose using two-part epoxy to balance the plane on its tricycle landing gear.

I also used the Avionix resin TA-4J cockpit set. This required some grinding to get to fit but in the end it turned out well. 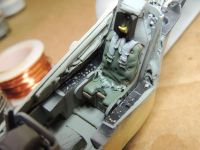 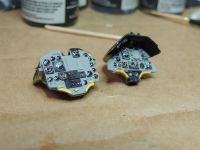 I decided to put one "Master Details" US Navy Aviator pilot in the forward cockpit as IAF reserve pilots during the war would crew available flying school planes on CAS missions. Some of these planes were also used for battlefield damage assessment missions placing themselves in harms way to get the information back to IDF headquarters. To give an impression of an engine in the simplified intakes, I cut a small section of compressor fan from the spares box and glued a sliver of it at the back of the intake wall. Next was a solution to a problem I always had with painting the warning red paint around the intake lip. I cut some white card stock and after some test fitting got it to slip in giving a nice interior wall and fairing back into the compressor fan. The next task was to modify the vertical tail to the TA-4H version. Careful cutting of the L/E tip and replacement with a small section from a spare tail plane made this conversion quite easy. The canopy is huge and needs some detailing. I framed the inside with "Plastruct" styrene strips and added the 4 mirrors which are quite apparent in the cockpit. Detail painting as you can imagine is tedious but necessary and after all the cockpit work was done the fuselage halves were closed and the wings and tail plane attached. Jumping ahead, the finishing touches of very minor sanding of joints, etc. were done a first coat of paint went on. The Israeli A4 Skyhawk scheme at this point in time was Douglas standard pattern with a slightly different shade of green than the arriving F-4 jets from McDonnell. The original colors for this TA-4H were: Tan FS30219 Sand FS33531 Green FS34258.

Following the initial paint, I pre-shaded the Tan and Sand with a light shade of brown that would show the fine panel and rivet lines. The green was later shaded with a darker shade of the original color. The load-out for this plane is 2 French 750kg bombs on the outboard pylons, drop tanks and 3 LAU-3 rocket pods on the centerline pylon.

I wanted this plane to be from 109sq. "The Valley Squadron". Their planes also had a unique placement of the national "Star of David" roundel mid-body rather than behind the intake lip as most other squadrons. A nice addition to my collection of other Israeli A4s. 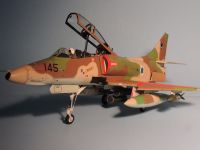 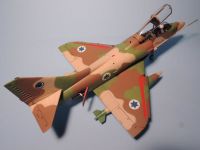 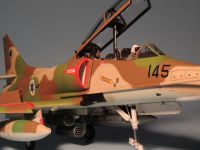 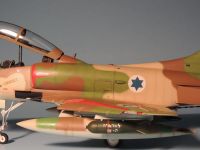 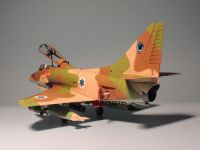 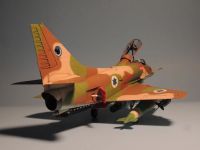