Here is my model of the Russian KT flying tank. The Russians wanted to give their paratroops armour support right at the drop zone. The Antonov design bureau was charged with the design. A T-60 light tank was chosen for the project, it was coupled with a biplane glider. The KT was to be towed to the drop zone by a TB-3, where upon it would be released to glide onto the drop zone, and the glider portion would be discarded. The prototype made one flight, in which the pilot/driver landed in what might be best described as a controlled crash landing. That was the machines one and only flight. Reference material including general arrangement drawing is from "The Encyclopedia of Russian Aircraft 1875-1995" by Bill Gunston.

The Model: The T-60 tank is a 1/35th scale Russian kit I don't remember the brand. That determined the overall scale of the model. The wings and tail assembly are made from card (actually poster board). Tail booms and interplane struts are wood, the rigging is #26ga. steel wire. The model has a span of 20.18 inches. 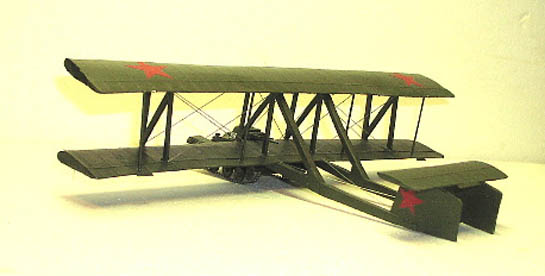