On the morning of February 20, 1942, U.S. Navy Task Force 11 was detected by long-range Japanese patrol planes near Bougainville Island while trying to conduct a "hit and run" raid against the Japanese bases at Rabaul. The Japanese launched several air attacks against the American force, which included a formation of eight Mitsubishi "Betty" medium bombers. At one point in the battle the only thing that stood between this experienced and determined Japanese formation and the task force's flagship (U.S.S. Lexington-CV2) was a lone Grumman F4F-3 "Wildcat" fighter flown by Lt. Edward "Butch" O'Hare. Without hesitation Lt. O'Hare engaged the Japanese bombers and achieved remarkable results. In a span of about five minutes he single-handedly crippled the formation, and very likely saved the U.S.S. Lexington from destruction. For his actions he was officially credited with shooting down five planes, became the first U.S. Navy Ace of WWII, was awarded the Congressional Medal of Honor and promoted to the rank of Lt. Commander. 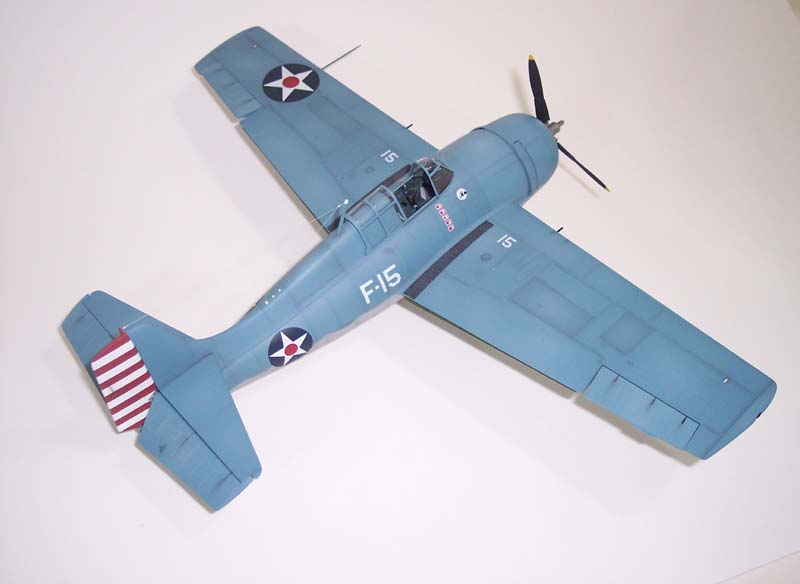 Starting at the Cockpit

Only the instrument panels and seat belt buckle parts were added from Eduard's F4F photo-etched detail set to improve the overall look. The kit seat was thinned down with sandpaper on all sides to give it a more correct scale appearance. Masking tape strips were used for the seat belts. This version of the "Wildcat" did not use shoulder straps. Per Martin Waligorski's tremendously helpful IPMS article on interior colors of U.S. WWII aircraft, the cockpit on Grumman built F4Fs was bronze green instead of the often cited interior green. Model Master euro green was used as a close substitute. Cockpit weathering was accomplished by adding dark gray pastel powder in the recesses for depth, and then dry-brushing the raised areas with Model Master dark ghost gray to bring out the details. 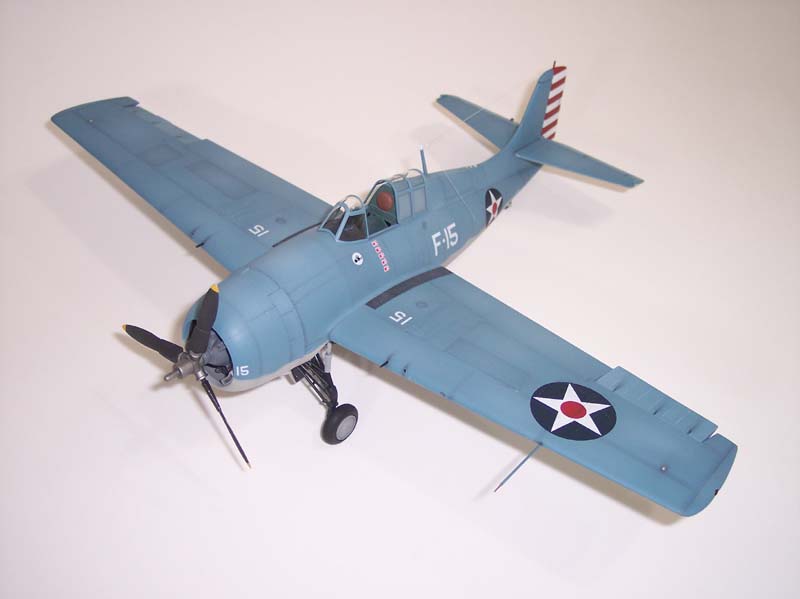 To obtain a better fit between the fuselage wing root lip and the wing, I first removed the kit's wing tab connection. Next, course grade sandpaper was rubbed across the mating surface of the upper and lower wing halves to reduce the wing chord thickness. The fit of the wing assembly to the fuselage wing root lip was continually checked to make sure that too much of the wing chord was not being removed. The auxiliary fuel tank locating holes were filled with superglue and sanded smooth, since these tanks were not used on the F4F-3 variant.

The wings were attached to the fuselage with only a couple of drops of 5-minute epoxy. This allowed me enough time to secure a near perfect alignment around the entire wing root lip. The fuselage/wing connection was then reinforced with superglue applied through the lower fuselage windows.

The fuselage interior bulkhead and framing parts were painted and assembled next. Fuselage corrections included removing both the air vent hole on right side of the fuselage and the extensions on the extreme end of the tail, as these were not used on the F4F-3.

Small holes for various antennas and recognition lights were drilled into the fuselage for small parts that were added in the final assembly. 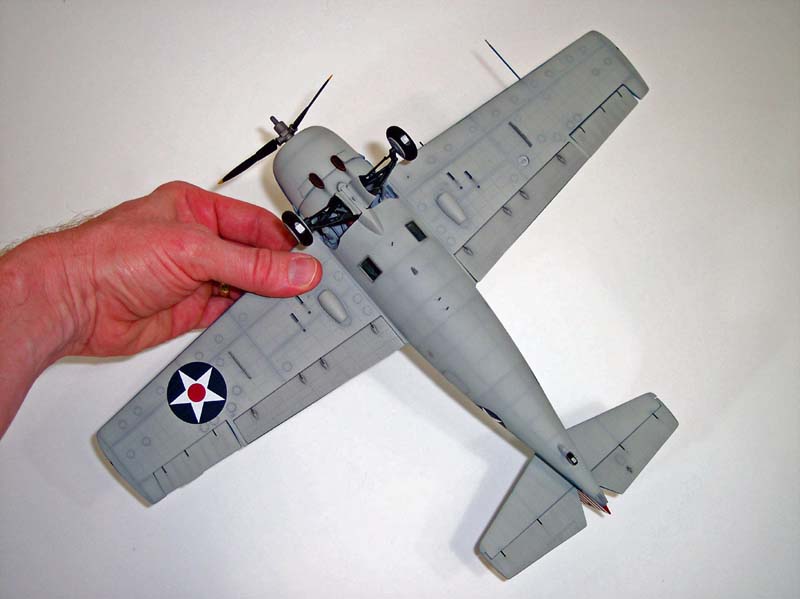 Butch O'Hare's F4F-3 carried the U.S. Navy color scheme of Non-Specular Blue Gray on the upper surfaces and Non-Specular Gray on the lower surfaces. Model Master paints 2055 and 1730 were used for these. A very loose, undefined demarcation line separated these two colors.

The lower surfaces were painted first. The "dirty finish" effect was accomplished in several steps. First, dark gray pastel powder was brushed along every recessed line. Clean Q-tips were used to remove the excess and soften the look. Finally, a weak wash overspray of the base color was applied over the panel lines until the desired effect was achieved. The key word is "subtlety".

To reproduce the undefined demarcation line, I cut a strip of masking tape with a very erratic "wave" pattern. I then made sure the top portion of the tape was at least 3/16" away from the fuselage. This distance created a very nice "diffused" look when the paint was applied. After the demarcation line was painted, the masking tape pieces were pressed firmly against the fuselage so there would be no accidental overspray while the rest of the upper surfaces were painted.

The same steps listed above were used for painting the upper surfaces. The only extra step was adding a random weak white wash overspray to produce a faded, sun-bleached look. Minor aluminum chipping was applied on the wing and stabilizer leading edges, handholds, cowling and various rivet heads. Finally, dark gray pastel powder was added to represent gun blast and engine exhaust stains. 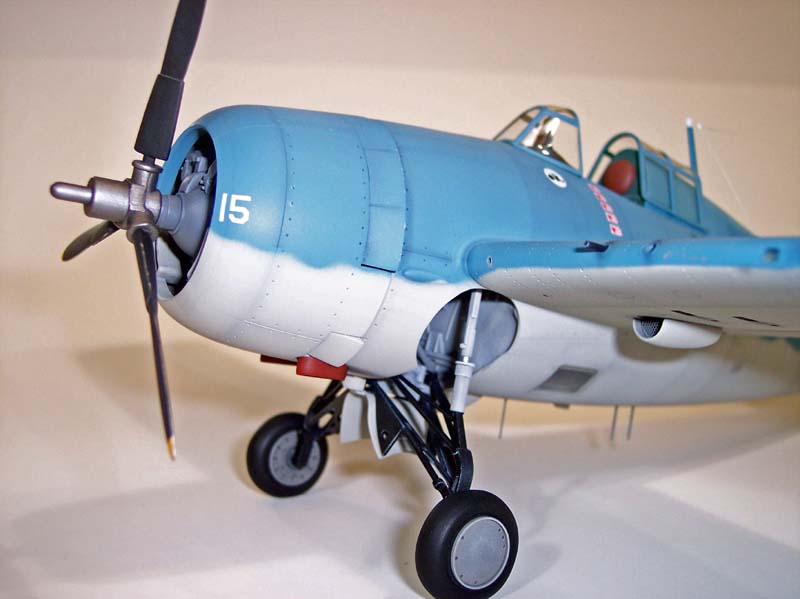 I had carefully buffed the entire assembly with a soft cloth after applying each coat of paint. This produced a fairly smooth finish that allowed me to apply the decals without first adding any Future gloss coat. All of the numbers and letters came from a couple of Aeromaster sheets, and the national insignias from a Yellow Wings sheet. The only unique marking on O'Hare's plane was the "Felix the Cat" squadron emblem, adopted by VF-3 in 1928. This emblem, as well as the kill markings, came from an old Super Scale sheet.

The national insignia decals on the wings would not conform to the many rivet holes and deep recess lines on the kit, even with strong decal solvent. I ended up cutting the decals along each recessed panel line, and using a needle to poke holes into every rivet. After this "surgery" was done a final application of decal solvent made everything lay down. Red, blue and white paint was used to touch up all of the areas the where the cutting had been done. This method was time consuming but produced outstanding results. 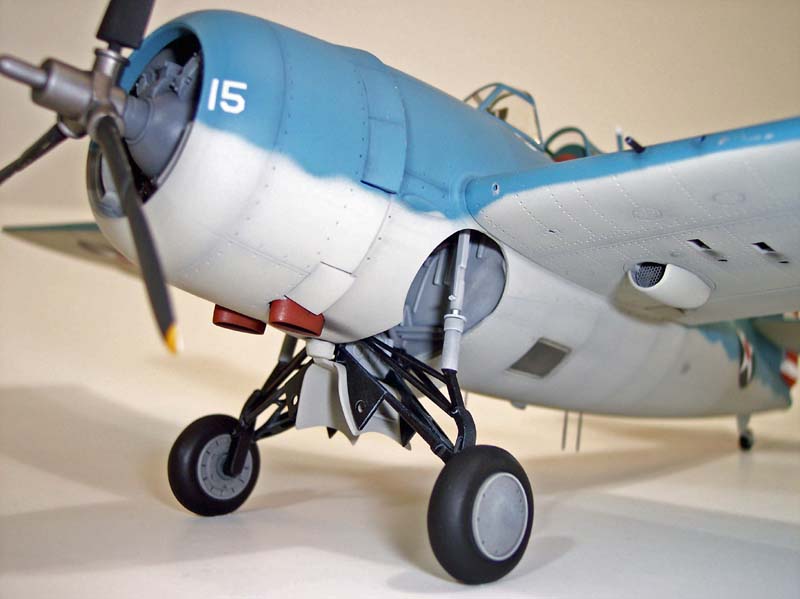 The only detail added to the engine was Eduard's photo-etched ignition wires. Small flexible wire was used for hinges on the rudder, elevators and ailerons. O'Hare's plane had smooth tires and the kit's rubber tires had a diamond tread, so they could not be used. A resin replacement set from J. Rutman Productions was purchased. These also had a diamond tread pattern but it was filled with superglue and sanded away. They were also modified by using the kit's front and back hub covers.

Scratch-built lower fuselage antenna details and Eduard's photo-etched bomb cradles were added next. The wing walkways were made from masking tape that was cut to size and painted before being added. The kit's wing tip lights were replaced with 5-minute epoxy mixed with food coloring (red and green). The kit's front left wing landing light was replaced with Krystal Kleer. The final modification was rebuilding the upper half of the reflector gun sight. 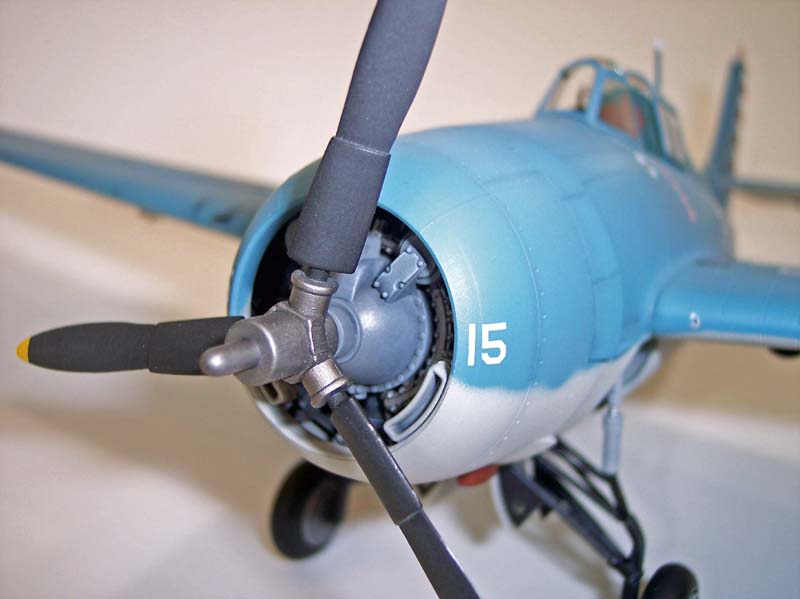 This was a very enjoyable project, and the quality of Trumpeter's kit made it one of the easiest 1/32 scale aircraft I have ever built. A construction article of this model was fortunate enough to be the cover article story in the November 2008 issue of Fine Scale Modeler magazine. 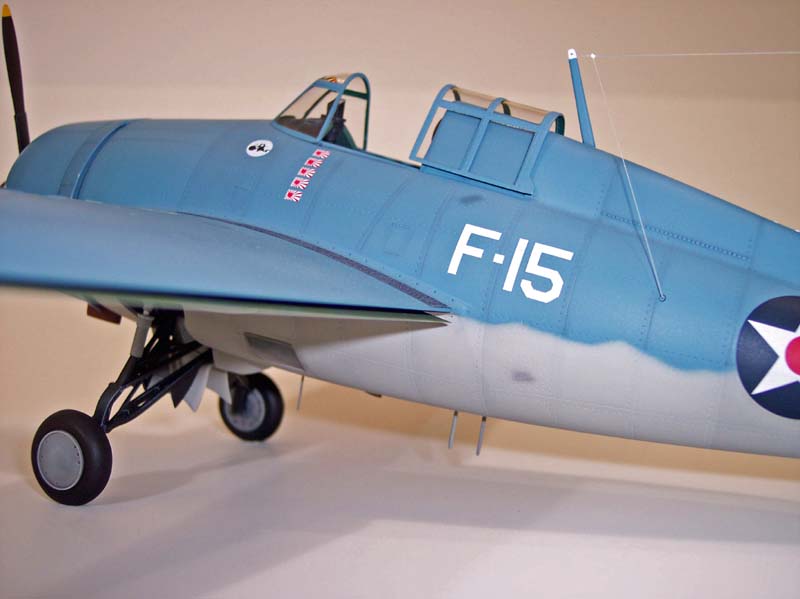 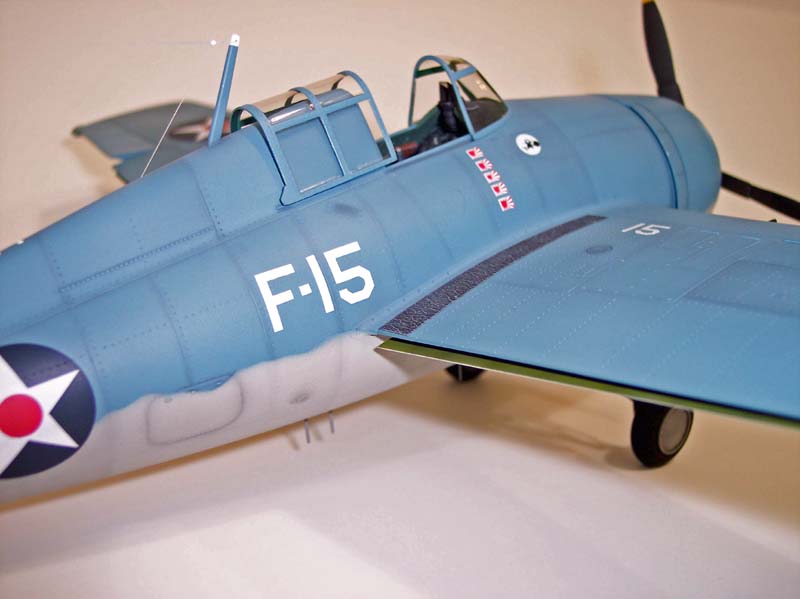 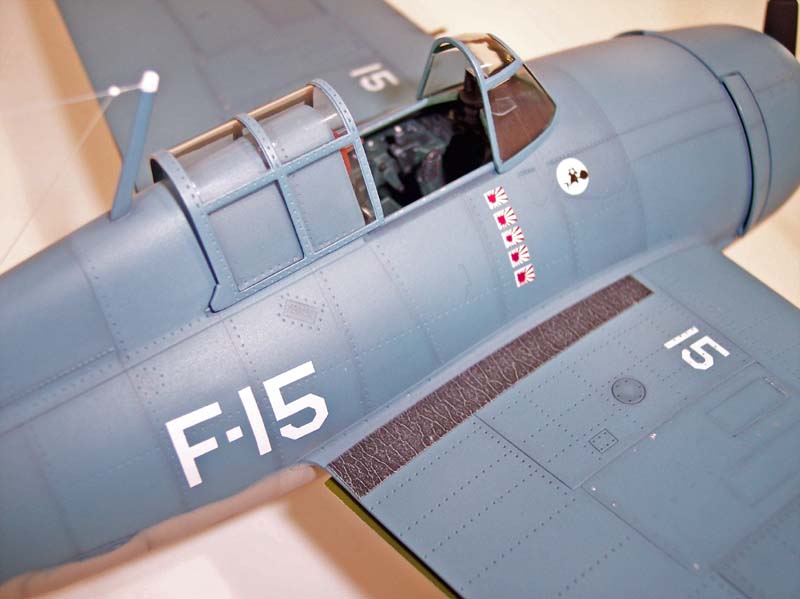 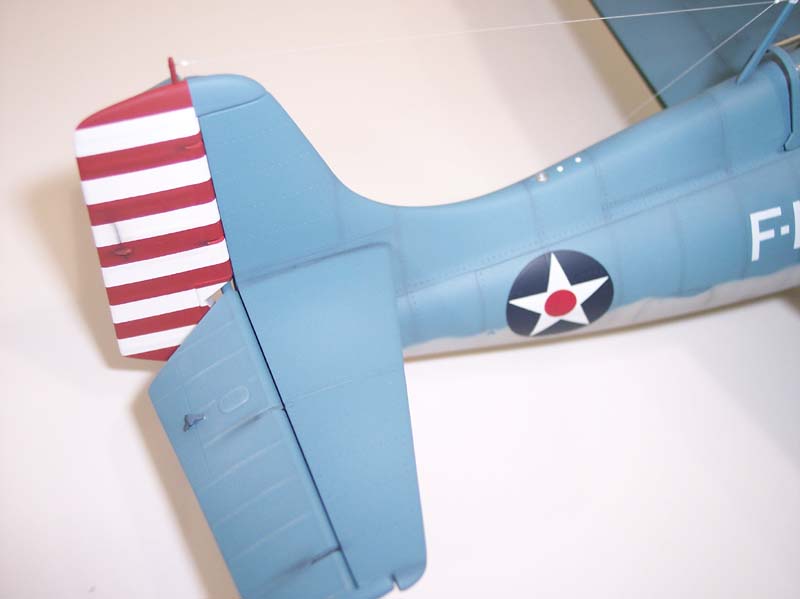 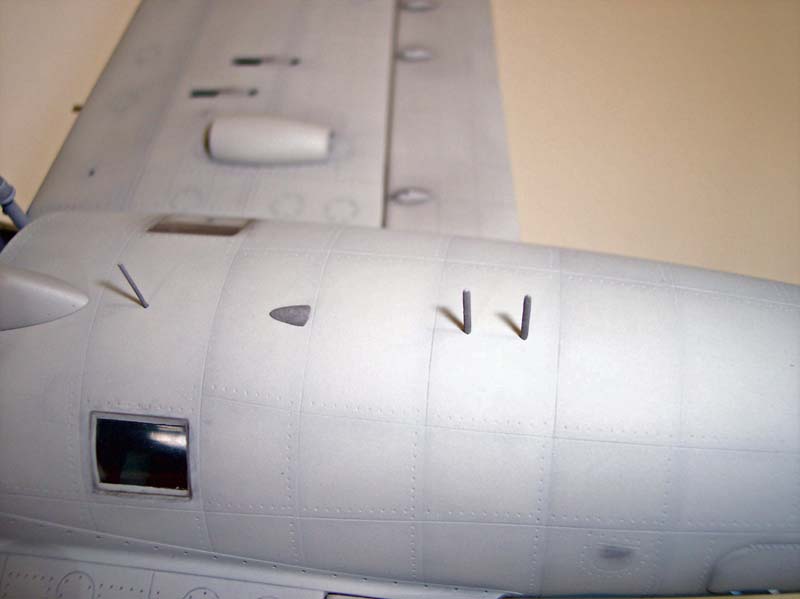 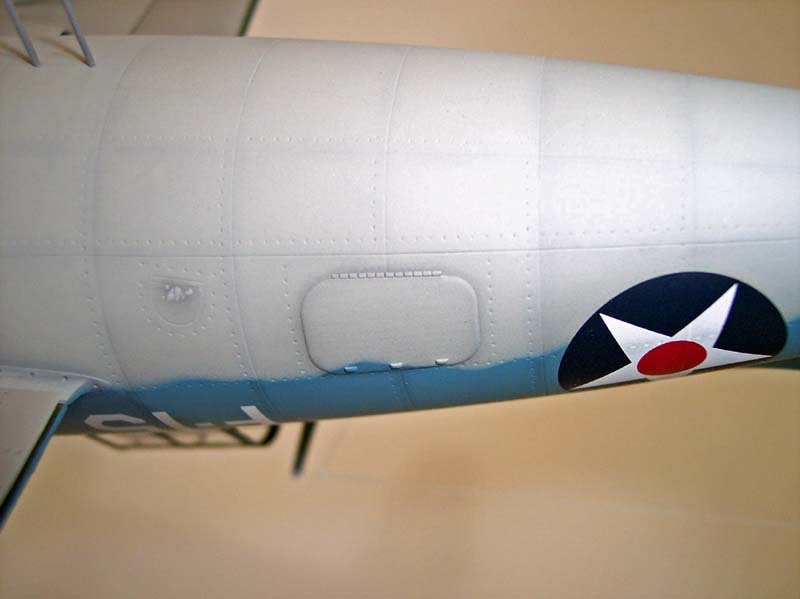 Bureau Number 4031 was one of a group of 87 aircraft manufactured and shipped to the U.S. Navy between July and September 1941. Aircraft from this batch were delivered to various Marine (VMF) and Navy (VF) fighter squadrons with Bureau Number 4031 assigned to VMF-211. The aircraft was not selected to go with most of the rest of the squadron to re-enforce Wake Island on November 28, 1941. It was at Ewa Marines Corps Air Station (Pearl Harbor) when the Japanese Navy attacked on December 7, 1941. Nine of the eleven VMF-211 F4F-3s present were destroyed in this attack, with 4031 being one of the survivors. The aircraft was transferred to VF-3 on December 15, 1941 (side code "F-15"), and was frequently flown by Lt. Edward "Butch" O'Hare, including his Medal of Honor flight and the Lae-Salamaua raid conducted on March 10, 1942. It next served as part of VF-2 during the Battle of the Coral Sea, and became one of only six "Wildcats" of that squadron to survive the battle by landing on the U.S.S. Yorktown instead of the U.S.S. Lexington on May 8, 1942. Bureau Number 4031 was then transferred to VF-42 until the middle of June 1942. It was then assigned to Marine Air Group (MAG) 23 and used in a training role. This history making aircraft was stricken from the U.S. Navy's inventory on July 29, 1944 and later scrapped.