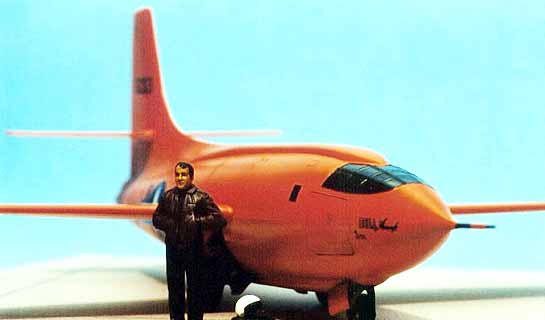 History of the Aircraft Modeled

Originally designated the XS-1 (Experimental Supersonic - 1st series), the Bell X-1 series of research aircraft are arguably the most recognized throughout the world. Show a picture of this aircraft to just about any world citizen with a smidgen of aviation knowledge, and he or she will probably identify it. I have had an interest in the X-1 since my very first visit to the Smithsonian Museum in 1957, when I stared at the X-1, along with Ryan's "Spirit of St. Louis", and the "Wright Flyer" replica. Of the three, the X-1 most vividly impressed upon my ten year old mind. It's still the first thing I see, when I visit the Smithsonian's Air & Space Museum now. Here some forty years later, I have finally found time to build this and the smaller TAMIYA kit of the X-1. Most of the technical and historic data, of which I write, was taken from Ben Guenther and Jay Miller's excellent Aerofax Datagraph 3 - Bell X-1 Variants, the absolute best small volume information book that one can buy on the Bell X-1 through X-1E research aircraft.

There were three of the first series of X-1 aircraft, 46-062, 46-063, and the ill-fated 46-064 (completed only one glide flight before being destroyed in a ground fire explosion due to faulty Ulmer leather gaskets in the propellant tanks causing the liquid oxygen and water/alcohol mix to ignite). The first two were almost identical, differing in their thickness/chord ratio wing sections, with 6062 having a thinner 8% ratio wing versus a 10% ratio on 6063. The second X-1 also carried a different instrument package and its instrument panel thusly carried different gauges. The third of the series, 46-064, had the same wing ratio as 6062, but was equipped with an increased fuel capacity and a steam-driven turbopump in lieu of the nitrogen propulsion system for the transfer of the rocket engine's propellants.

All three first generation X-1s were powered by a single four-chamber Reaction Motors, Inc. bifuel XLR11-RM-3 (6062 and 6063) or XLR11-RM-5 (6064) rocket engine. Fuel was liquid oxygen (lox) and diluted ethyl alcohol (water dilution). The engine weighed 345 pounds dry and produced 6,000 pound static thrust with all four rocket chambers fired. The engine was not throttleable, but the four combustion chambers could be fired individually or in groups. At maximum thrust settings, the engine provided full power for approximately 5 minutes before fuel depletion.

The model represents the second X-1 (46-063), which was completed in late summer 1946 and delivered to Muroc in October, just ahead of the first aircraft, which had been returned to Bell in order to have the new 8% thickness/chord ratio wings installed. It performed its first glide flight on October 11 with "Slick" Goodlin at the controls and performed its first powered flight on December 9, which incidently was the first powered flight of the first-generation X-1 series. Once Bell had finished its contracted test series, 6063 was turned over to the U.S. Air Force for a flight test by then Captain "Chuck" Yeager before turning the test flight program over to NACA. NACA's test pilot Herbert Hoover became the first civilian to break the sound-barrier on March 10, 1948, when he piloted 6063 to Mach 1.065 or 703 mph at 40,000 feet. Two weeks later Hoover piloted 6063 to Mach 1.12 or 739 mph at 40,000 feet, which proved to be the highest Mach number recorded in 74 glide and piloted flights by 46-063. This was primarily due to the thicker chord wings on 6063. It completed the last flight of the first series of X-1s on October 23, 1951, but the career of X-1 46-063 was not over.

Due to the untimely losses of X-1 46-064 and two of the second generation series, the X-1A and X-1D, there were no more flyable X-1s present. A hurried decision to insure the NACA's high-speed research gave birth to a program to modify the second X-1 (46-063) into what was effectively a new aircraft. It was equipped with a turbine pump fuel system and had a totally redesigned cockpit and canopy configuration (required to accommodate a NACA-specified ejection seat), and new extremely thin 4% thickness/chord ratio wings. Modification was finished in March 1954 and the new airframe was designated X-1E. It underwent 26 glide and powered flights between December 1955 and November 1958, reaching a maximum speed of Mach 2.24 or 1,478 mph on October 8, 1957. It also served the distinction of performing the last flight of the second-generation X-1 aircraft and can still be seen on permanent display, as the X-1E, in front of the National Air and Space Administration's Dryden Flight Research Facility at Edwards Air Force Base.

Revell's cockpit was simple, but effective. I added wiring to the instruments and scratch-built an oxygen hose, but otherwise built it as per instructions. I didn't like the molded-on seat belts and shoulder harnesses, but their removal would have been almost impossible, so I simply painted them. They looked okay, but I would have still preferred masking tape belts with photoetched buckles. The cockpit was painted dark gull gray, with the instrument panel and various boxes painted flat black. Instrument gauges were done with Waldron-punched disks of white trim film and Reheat Models Instrument decals in 1/48 scale (the 1/32 scale decals looked too large).

The kit contains a fair facsimile of the Reaction Motors rocket engine, but nothing can be seen once the fuselage halves are joined, so I simply painted it flat black. When the rocket nozzle piece was trial fitted to the rear of the engine, a rather large gap existed and the nozzle piece was too far recessed into the rear. I cut a bulkhead from sheet styrene to close the rear and allow the nozzle piece to project outward more. I held off drilling the nozzle's opening, until the sheet bulkhead and nozzle piece were place and completely set. I added fuel jettison tubes from sections of hypo tubing.

Except for some small additions to the landing gear, I built the exterior out-of-the-box. I didn't like the solid molded scissors on the front gear strut, so I cut it off, cleaned the area, and installed a replacement from scrap stock. I added two brake lines for the main landing gear, but otherwise built everything else as per instructions. Wheel bays, strut assemblies, and gear door interiors were painted interior green. Wheels were painted bright aluminum with the tires picked out first in flat black, followed by a coat of tire black. I install a short piece of small gauge wire for the valve stem in the main gear's wheels, but did not give them a black wash as I did the front wheel. The hatch door comes separate, but fails to show the pressurization vent. There was only one on 6063, while 6062 had two vents. I enlarged some copies from TAMIYA decal sheet to 1/32 scale, taped the enlargement over the hatch in the proper location, and pricked small holes with a needle held in a pin vise, so that I could remove the paper enlargement and drill the indentations with a #80 drill bit. I chose to paint the interior, stick a couple of strips of two sided tape to the rim and stick the door to the fuselage. It worked wonderfully!

The pilot figure came from a Reheat Models resin cast of "Chuck" Yeager in 1/32 scale (catalogue number 48-005). The chute and helmet come with the resin set. I primed both in neutral gray and hand painted them with acrylics. Ink and acrylic washes were followed by dry brushed highlights. 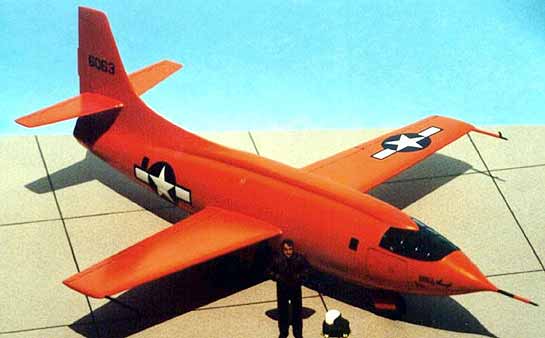 The canopy piece was masked with Bare-metal foil and painted black before attaching it to the fuselage. I removed the Bare-metal mask and polished out the adhesive residue, attached the canopy to the fuselage, and masked the entire canopy with masking tape strips.

Since the model was molded in orange, I decided to primed it in light gull gray. This worked well, as the gray was light enough to allow for good opaqueness when the main color was shot. For the prime color I shot the model with two coats of Polly Scale Reefer Orange. After the paint had dried for two days, I rubbed out the finish and applied two coats of Polly Scale Clear Gloss.

If one uses the kit decals for "Chuck" Yeager's record breaking aircraft 46-062, one will have to come up with some aftermarket national insignia, as 6062 used the stars and bars with the red stripe that was adapted on the inception of the U.S. Air Force. The late World War II style insignia included with the kit was correct for the second X-1, 46-063. The only kit decals I used were the Bell Aircraft logos and the pressure pump valve stencil. The national insignia was taken from a SuperScale sheet for late model World War II in 1/ 48 scale. The black squares were cut from black trim film. Identification numbers came from an AeroMaster sheet for ID number in 1/48 scale. After all decals had dried, I washed the residue and applied ink washes to all control recesses. The model was lastly given two more coats of clear gloss, masking was removed from the canopy, and it was given a coat of FUTURE.