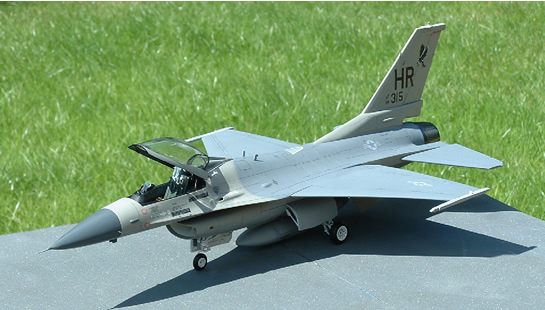 When I returned to modelling last year, I started off with small stuff like a 1/48 109. Then I did a couple of bigger models like the 1/32 Tiger Moth and the Spitfire. Now I’ve really done it… a 1/32 scale F-16! The damn thing measures over a foot and a half long, God knows where I’m going to put it…

Anyway, having looked through the Gallery pages it struck me that nobody seems to have submitted a 1/32 Revell F-16, so I decided to find out why. I bought one cheap off eBay, and soon found out. It was the “Tiger Meet” version, of the Belgian Air Force, with markings only for that service. First thing on my shopping list then, was a set of Superscale decals for USAF markings, and also an Eduard PE set to add a bit of detail to the cockpit and undercarriage. I decided to use the kit ejection seat as the detail on this looked pretty good, but had to spend time carving off the moulded on belts and replacing them with PE ones. The rest of the cockpit was pretty basic, but the PE set helped here. One thing which amazed me was that in such a large scale, no throttle lever was present, a fairly glaring omission. Scratchbuilding time again. I also added some switches to the HUD panel by drilling tiny holes in it and poking short bits of wire through, which were then painted. I added the pilot’s oxygen hose from coiled wire, and replaced the HUD screen with thin acetate sheet. One of the reasons for the sparse cockpit detail may be that the canopy is moulded in one piece with the rear transparency, and has no facility to be positioned open. I was having none of that, so surgery took place to separate the two parts. Then problem number two presented itself – the main canopy had none of the rear extensions which form the hinge point on the real aircraft. More scratchbuilding to extend the canopy frame rearwards followed, and then the same on the canopy raising mechanism to give the canopy something to attach to. (If the canopy rear edge doesn’t look quite right to you, that’s why.) This was a bargain kit from eBay, but was turning into a lot of work for me. Still, we’re modellers aren’t we, not just assemblers? 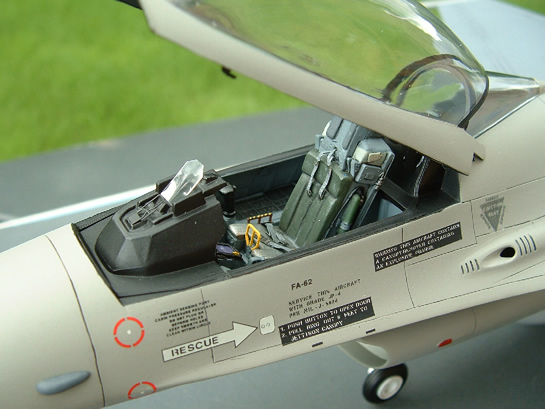 Then the fuselage was assembled after the gun muzzle post had been drilled out (Revell moulded it solid) and the wings attached. This came back to haunt me later, as the port rear section of the fuselage at the speedbrakes was warped downwards. This meant that the port stabilizer which attached here would look at an odd angle, and lining up the wings square with nothing but a warped fuselage to judge from was difficult. That’s why when I finally sat the model on its wheels, the port wing was 5mm further off the deck than the starboard one. Coupled with the fact that the wing was warped too, this 5mm makes a noticeable difference and spoiled the look of the whole model for me. A point to watch if you’re considering this kit. 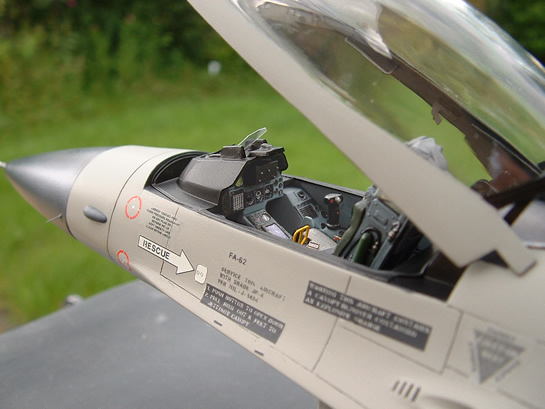 The kit has raised panel lines throughout, except the curved access panels on top of the fuselage, which was a blessing as I rescribed the whole aircraft and these would have been extra tricky. Generally, detail was average, but fit wasn’t too good and was compounded by the warped parts previously described. I used a lot of putty on areas such as the wing roots and along the sides of the fuselage at the rear – good job I did rescribe, as sanding would have lost a lot of the raised detail otherwise. I also used putty to close up the locating pin holes under the wings for the pylons. I like my aircraft to have very little under the wings, as you get the purer shape of the aircraft that way. I decided to retain the belly tank, though, and I will fill the wingtip rails with a pair of Sidewinders, just so that people know what this thing is for.

One section which was unforgivable by Revell though, was the intake. The fit to the body was great, no complaints there, but then they went and installed a prominent front wheel well box right in full view of the open intake! Silly buggers. I thought long and hard about this, and ended up filling the intake with Milliput to blend the box in with the intake interior. Not an easy job when the intake is already assembled, and all the internal filing, sanding, polishing and painting took a lot of time and effort to get somewhere near right. That’s why most people build the Hasegawa or Tamiya 1/32 Falcons instead, is it? Right, now I know. Forgive me, I’m still relatively new to all this! 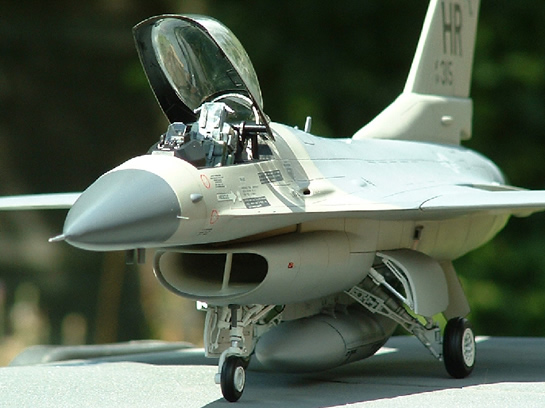 At the other end of the engine, the exhaust nozzle needed some work. I fitted the plain inside with strips of Dymo tape to give the impression of the overlapping segments, and then painted it white and finished off with airbrushed black streaks. Outside, I went for Alclad Steel as a base coat, and experimented with very gentle airbrushing over this with streaks of clear blue, red and even yellow to get that metallic rainbow sheen of burnt metal. The ring just inboard of the turkey feathers was Alclad with clear blue over it a little more heavily. Not sure if it’ll be visible on the photos, but in natural daylight I can assure you that you don’t believe you’re looking at plastic… 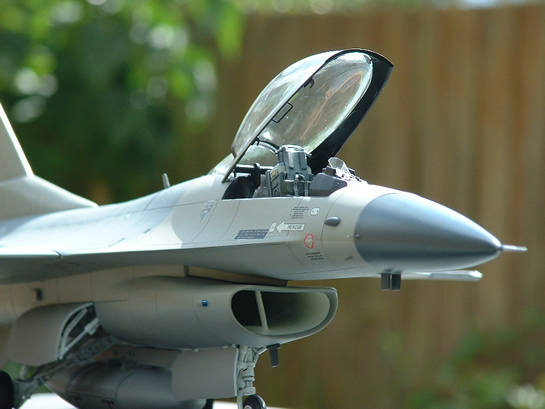 I like the undercarriage. A bit chunky, and a bit sparse on the wheel well details, but plenty of struts and things to take your mind off that. I added brake cables and other miscellanea with the PE set and some brass wire. The whole gloss white undercart was then given a black wash which highlighted the nooks and crannies quite satisfactorily. I thought I’d overdone it at first, but it fits in with the whole model quite nicely.

Once the airframe was together, painting commenced with the usual Tamiya acrylics although I have NO idea what Tamiya colours corresponded to the real F-16 – I just did the best I could with the range of greys at my disposal! (If you look at the photos, you’ll see that the whole plane changes colour depending on whether the sun is in or out, so I can’t see what all the fuss is about when it comes to exact colour matches.) The dark grey curve near the cockpit was airbrushed freehand. I know some people will say that the darker grey should come further forward, overlapping the cockpit, but I took some pictures of some real F-16s at RAF Fairford just before I painted this model, and they had the curve right where I put it, so there! Anyway, there are enough inaccuracies on this model to keep the nit-pickers happy, but as I’ve said before, overall - does it look good?

Then it was a clear coat of Johnson’s floor wax and the usual black wash in the newly recessed panel lines before the decals. Hmm, decals. I had to use a combination of Superscale decals for unit markings, Revell kit decals for the smaller stencilling, and home made decals too, as some of the stencils weren’t low viz in the kit. Luckily I had a 1/48 F-16 in my stash, so I scanned the decal sheet into my computer and scaled up the stencils I needed. For some reason, ALL of the decals silvered, so I can only conclude it was my surface preparation at fault, since three different sources of decals couldn’t all be the problem. Once the flat coat went on the silvering was quite pronounced from certain angles, which is another source of disappointment with this model. 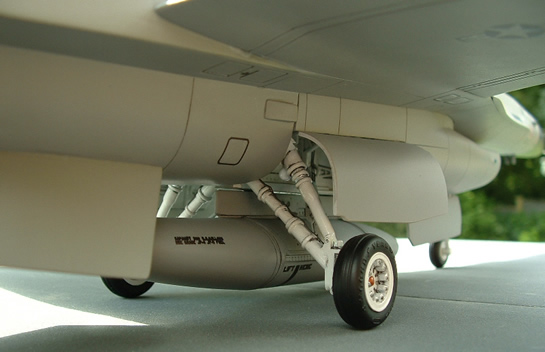 Then it was onto finishing touches, such as the static dischargers on the fin and stabilizers, which I made from lengths of 0.015” steel wire. Some people recommend fishing line or toothbrush bristles as a safeguard against breakages…let’s see them try to break these! Safety? In my opinion, anyone who gets their fingers too close to one of MY models deserves to get punctured! 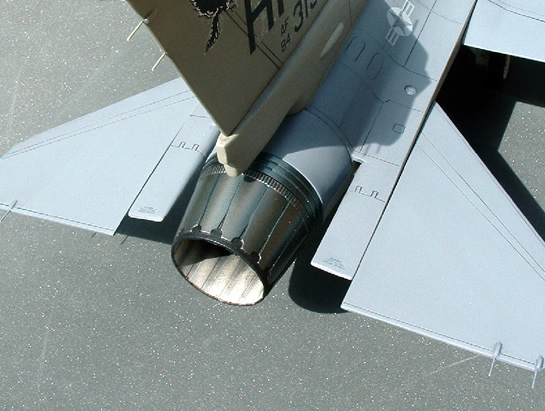 As a conclusion, I can see why nobody has submitted a Revell 1/32 F-16 before…raised panel lines, poor fit, average detailing, ludicrous intake, closed canopy. On the other hand, if you’re prepared to put in a LOT of effort, you end up with a big chunk of aircraft sitting on your coffee table which doesn’t look that dissimilar to what you’d get from a kit costing several times as much. 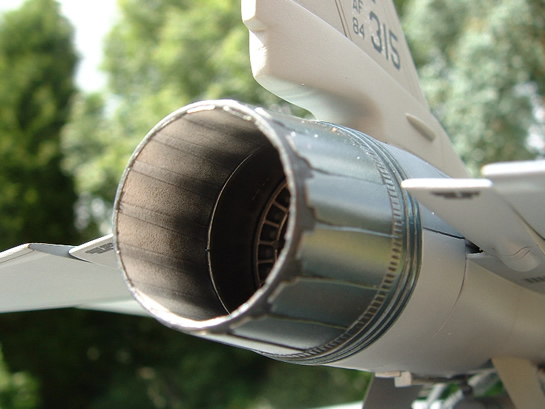