The end of WW2 pretty much saw most of the empires of the world fall and the Dutch East Indies was no different. Fueled by 3 years of occupation by the Japanese, who actively encouraged nationalistic sentiments, Indonesia declared independence just two days after the Japanese surrender on August 15th. The result would be a rather nasty conflict that was rather unflattering for the Dutch, who eventually recognised Indonesian Independence in December 1949.

There were many Japanese aircraft left in Indonesia at the end of the war and as many as possible were quickly snapped up by Indonesian forces, who managed to gather a surprising amount of serviceable equipment. In early 1946, Dutch intelligence reported 14 Ki-61s were operational with a further 4 unserviceable aircraft, but it is thought that 6 aircraft were acquired with only 1 serviceable. The Dutch called the Ki 61 'Mustang Jepang'; Japanese Mustang. They would have been a formidable opponent for a Dutch Kittyhawk, less so for the Mustangs. Aside from a period water colour painting upon which my model is based, this is all the information known of these aircraft. 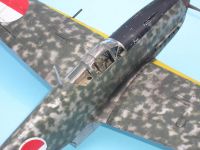