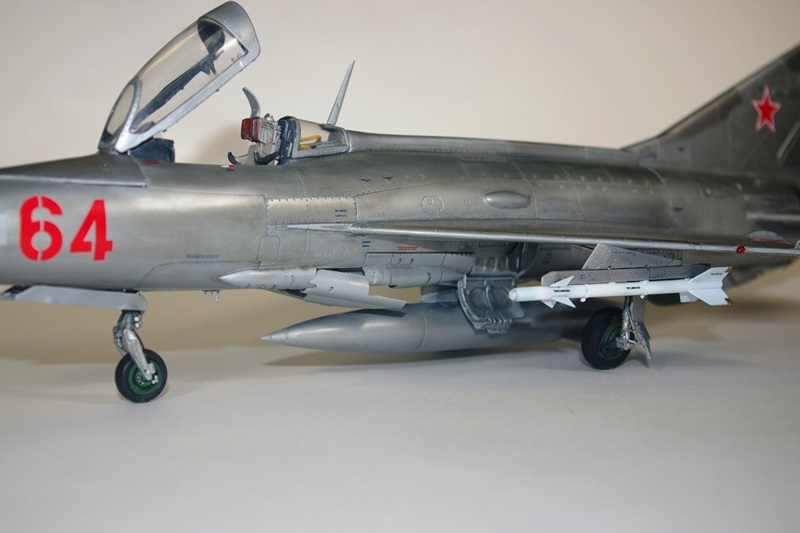 I have always been partial to the early versions of most aircraft and the MiG-21 series is no exception. The MiG-21F-13 is a sleek, clean machine that has always appealed to me. The later MiG-21s, especially after the PF series, look too bulky. I despaired of ever seeing one in kit form other than 1/72 but Trumpeter came out first with a version in 1/32 and then followed with one in 1/48. Eduard and Pavla then followed with outstanding detail sets in 1/32 PE and resin respectively.

The kit is good but not without flaws. In some respects it is over-engineered and, as with many kits with open panels, those panels fit poorly if one wishes to build the model with those same panels closed. The tail is correctly sized smaller for the F-13 versus the MiG-21MF but for some inexplicable reason Trumpeter used the same panel lines on the F-13 tail as for their MF. I filled the tail panel lines with Mr. Surfacer and re-scribed the entire tail section. It is a fairly simple correction to make. There are some other minor panel line corrections to make.

I drilled out all the air scoops. Several of the air scoops need correction. The two directly above the horizontal stabs have a down angle attitude on the kit. I looked at that and thought “That can’t be right!” I consulted photos and drawings and found the kit depiction to be incorrect. I sanded off the mountings for the scoops and correctly placed the scoops. The scoop on the underside where the fuselage breaks for the engine is incorrect. I cut it apart and corrected it. I also added airflow deflectors on top of the wings immediately in front of the wing flaps. These are not included in the kit. I added details to the wheel wells and speed brakes.

The fit of the wings to the fuselage is okay at best. I had to use a bit of filler there. As with their MiG-17, the fuselage section break at the engine has the rear section larger than the front section resulting in a small step down (versus the huge step down difference in the MiG-17 kit).

The kit canopy had a large seam down the middle of it. The Pavla vac canopy was not very good so I sanded the seam from the kit canopy with ever finer grades of sandpaper and then polished it. It turned out fine. 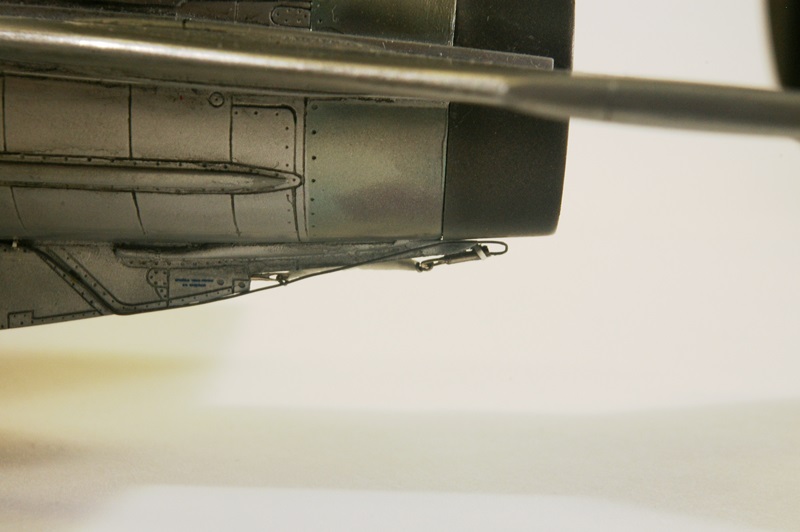 My greatest frustration was the Alclad paint. I had some bad bottles years ago when the problem was widespread and I threw them out. Somehow (swap meet purchase, hobby shop going-out–of-business sale, etc.) I unsuspectingly got another bad bottle. The paint has yet to dry. If I pick it up with my fingers, my fingers stick to the model. A H-U-G-E!!! problem that frustrates the devil out of me. I was too far into the project to start over by stripping the kit. I used four shades of Alclad but only the 101 was bad – but that was enough to ruin what should have been an otherwise fun project. A simple test for bad Alclad: Put a small drop between your thumb and forefinger. If after about a minute the fingers stick together, the paint is bad. 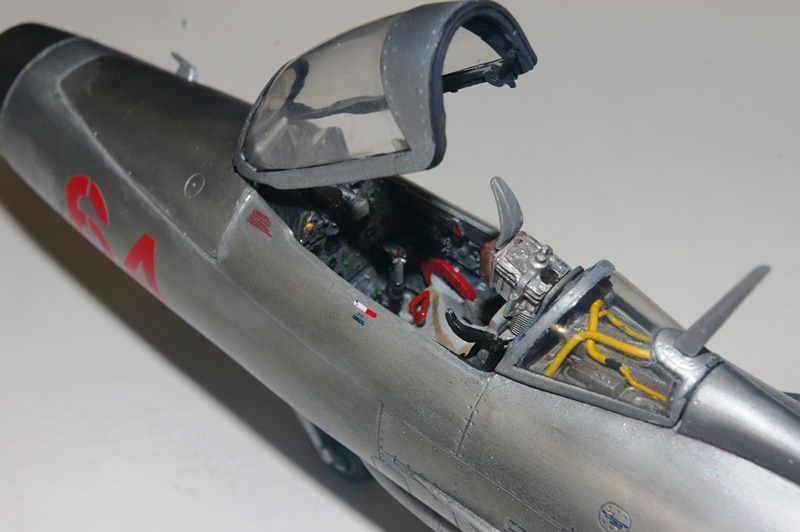 In typical fashion I went overboard and bought all the detail sets. The difficulty of using a PE cockpit and a resin cockpit simultaneously on the same kit did not occur to me until I had both in my hands. As my friends used to say, “Art, you may be slow but you make up for it by not being very smart.” The Pavla resin cockpit tub is a work of beauty but fitting it into the kit is a major problem. I made it work but if I had it to do over again I would have used only the Eduard PE set in the original kit tub, if for no other reason than Eduard provides the small side glass shields for the cockpit combing whereas with the Pavla set one has to scratch build them. I know – I could have used the Eduard clear parts with the Pavla set but why violate a PE set just to get two small clear plastic parts? (See quote from friends above.) The Pavla resin ejection seat is okay. The Eduard PE seat is very good. I used the resin. (See quote above.) The Pavla resin canopy details parts are excellent and make a very bland kit part into another separate, enjoyable project.

The kit depiction of the canopy lift mechanism is sheer fantasy so I scratch-built a new mechanism. 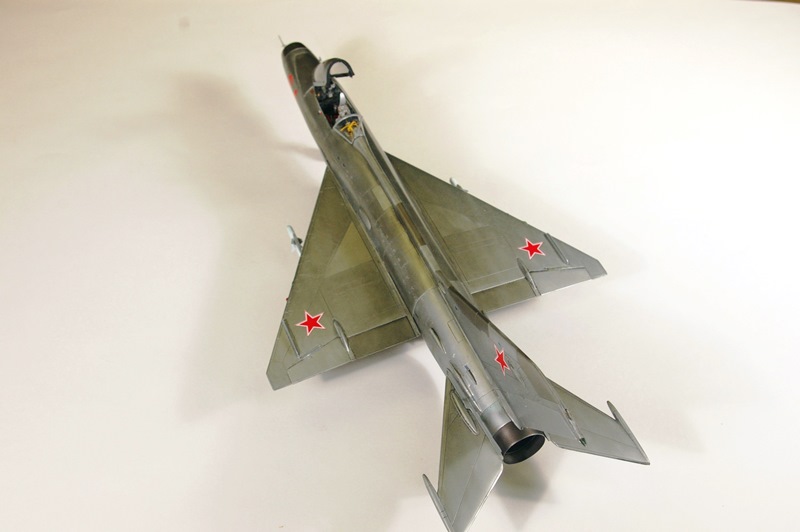 The Eduard exterior set is a thing of beauty. The PE detail parts make each missile a separate project, for better or for worse, but I enjoyed building them. The other PE parts are equally good. The Eduard engine set with afterburner is a work of genius. I was skeptical of the set after having been very disappointed in their MiG-17 afterburner – a useless waste of fine metal. But the MiG-21F-13 set is a wonder to behold. It is fun to assemble and looks great. 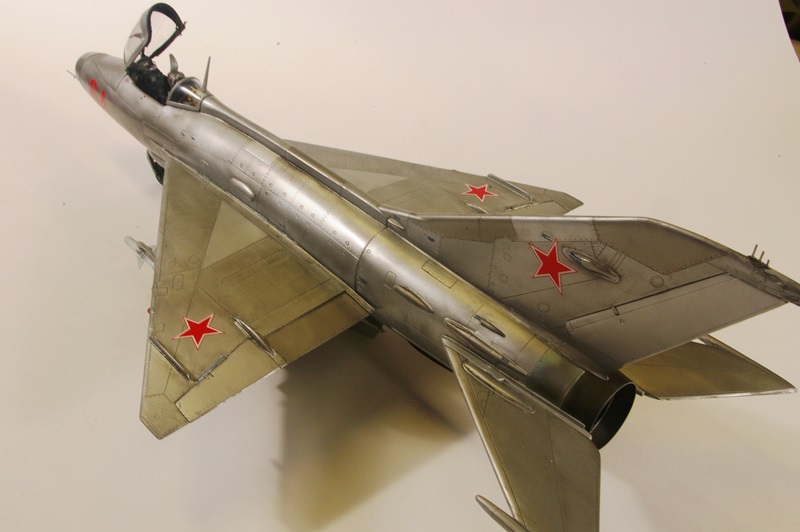 The coolest Eduard PE part led me to a revelation. There was a small clasp for the parachute cable. Eduard depicts the cable as running from the strake (kit strake is incorrect and should be shortened) to beneath the afterburner and then back along the strake to a fuselage panel where the parachute was stored and from which it deployed on landing. I thought “No way!” The mind can imagine all sorts of disasters resulting from that setup. I consulted my references and sure enough – Eduard is correct. I used wire, tissue and metal tape to build the landing parachute cabling. [BTW the best reference site I found showing this arrangement is a Russian Air Force Museum website that introduced a virus that defeated my virus protection and kept me down for a week before I got rid of it – I hope!] 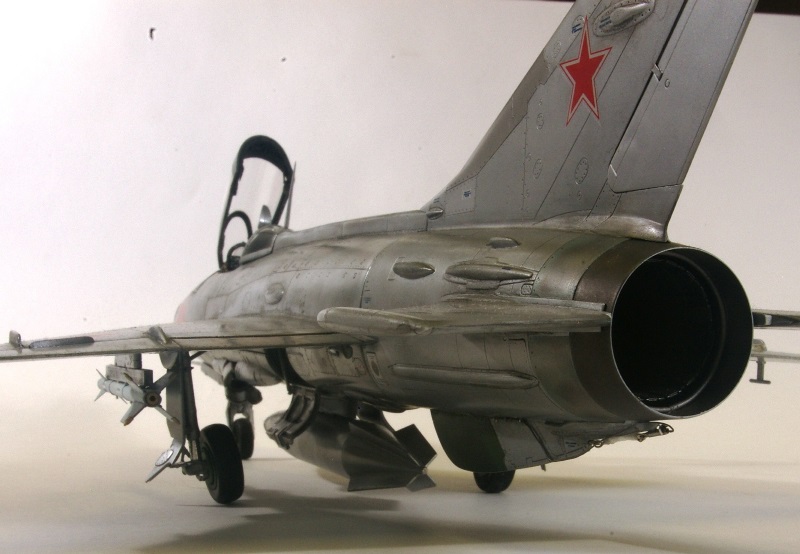 W-E-I-G-H-T!!! Trumpeter brilliantly made the shock cone out of metal to serve as the nose weight. Good idea! But…if you use a lot of aftermarket as I did and several coats of paint it won’t be enough weight. I filled the inside of the shock cone with birdshot and placed birdshot in other nearby locations. It was just barely enough. I had to put a large nut in the beautifully detailed avionics compartment and that necessitated closing it. What a waste!