How To Build An FGR in 1/32 Scale;
A Further Stop On the Continuing Quest
Part 2: The Intakes
by Frank Mitchell

I am aware that this part of the FGR build may look a bit intimidating, particularly if you look at the last few pictures first, but I promise that each step is very doable. I do have to say, however, that the intakes are a bit trickier than is the exhaust area; care is needed to make them accurate and to make sure they end up being the same on each side. Sounds obvious, but the problem is that you are, in reality, building four structures: two inner and two outer intakes, and they all have to come together (semi) properly.

To answer one potential question: yes, I have a couple of sets of seamless intakes but chose not to use them. Resin, after all, doesn't like to bend, and in my technique, a fair amount of that is required. Besides, they would also have to be widened the same way the kit ones are, which still means sanding inside, so why waste good (and expensive) intakes?

1. To begin this phase of the project, remove the hatched area in Pic 1. This will allow the intake to fit over the wing. 2. Widen the kit forward outer intakes by the usual 3/16". Pic 1 shows the lines used to cut them apart. Simply add pieces of styrene, and glue them back together. One trick: line up the forward edge when gluing. It is much easier to trim the rear and the molded vents need protecting. Pics 2 & 3 show the modified intakes taped to the fuselage. 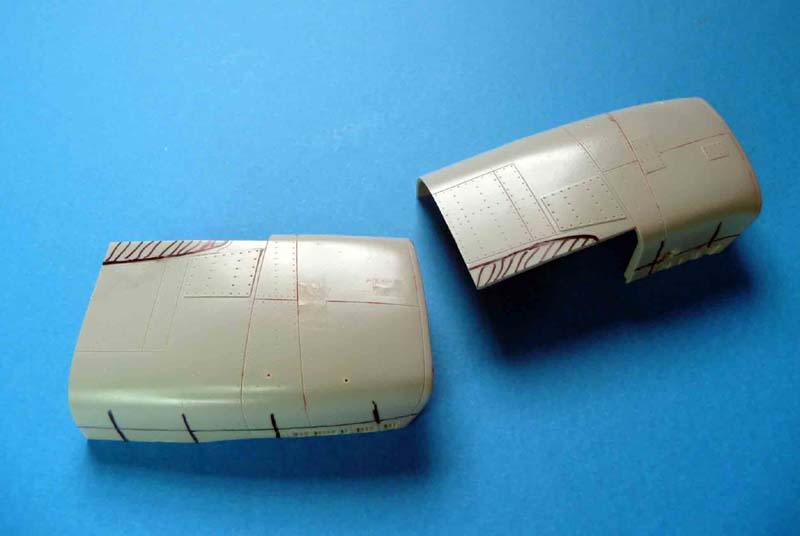 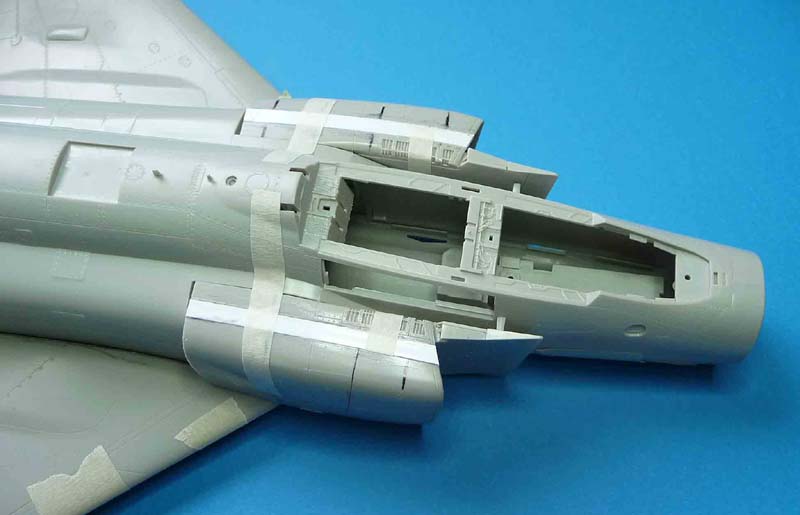 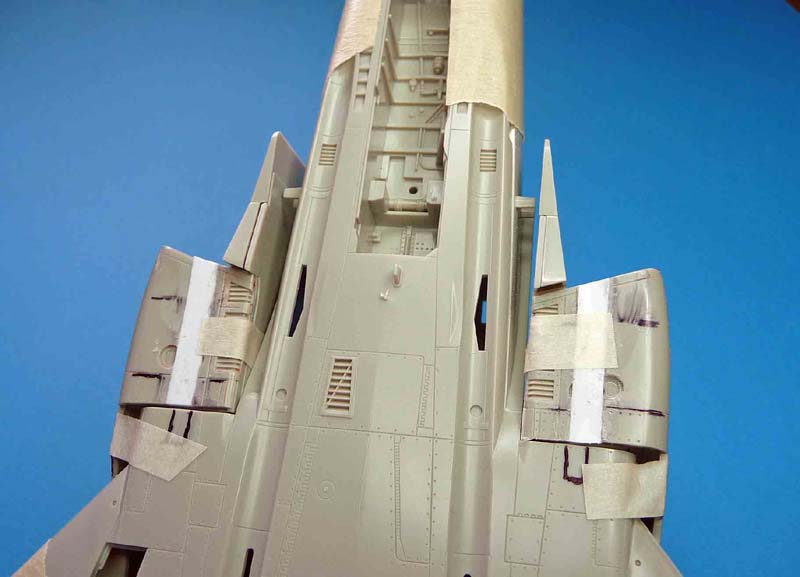 Pic 4 & 5 show our next problem: making the sides of the fuselage curve gently between the old fuselage and the new intakes. 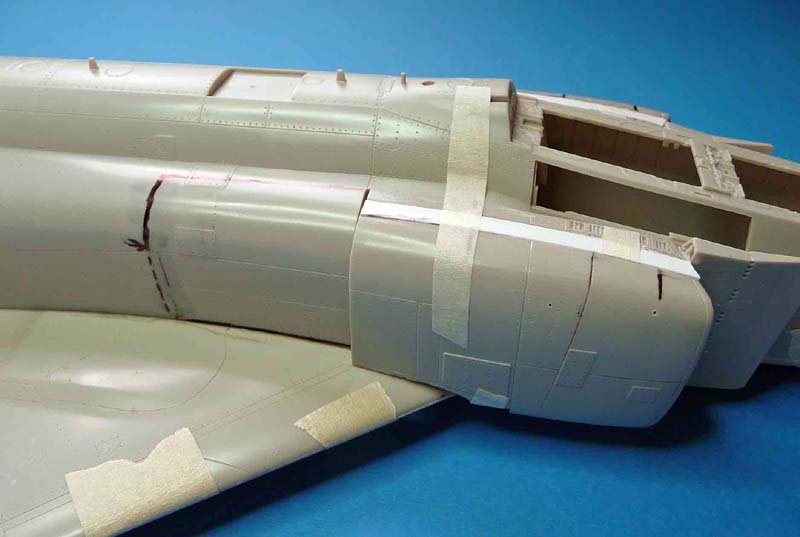 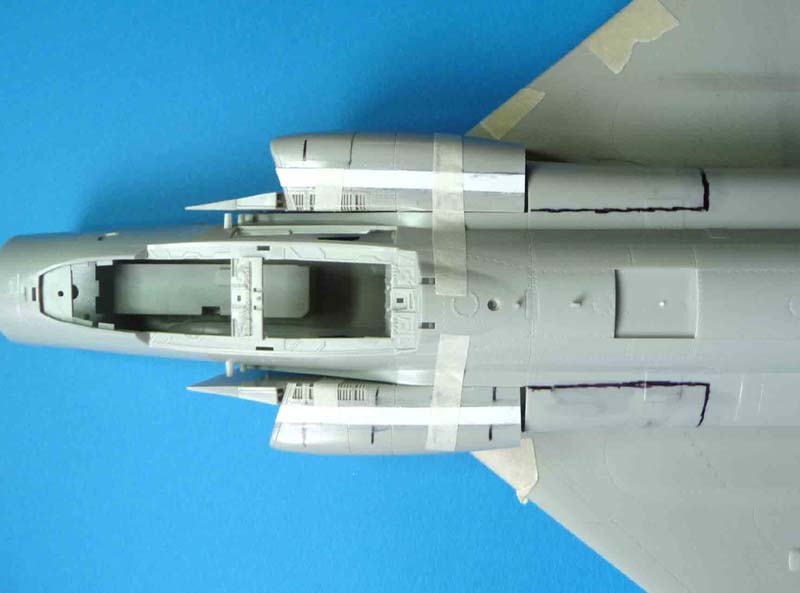 3. With the intakes taped to the fuselage, tape the wing to the fuselage and draw a line along the wing/fuselage seam. Now remove the wing and make a cut along that line for a distance of about 1 7/8" (Pic 6) 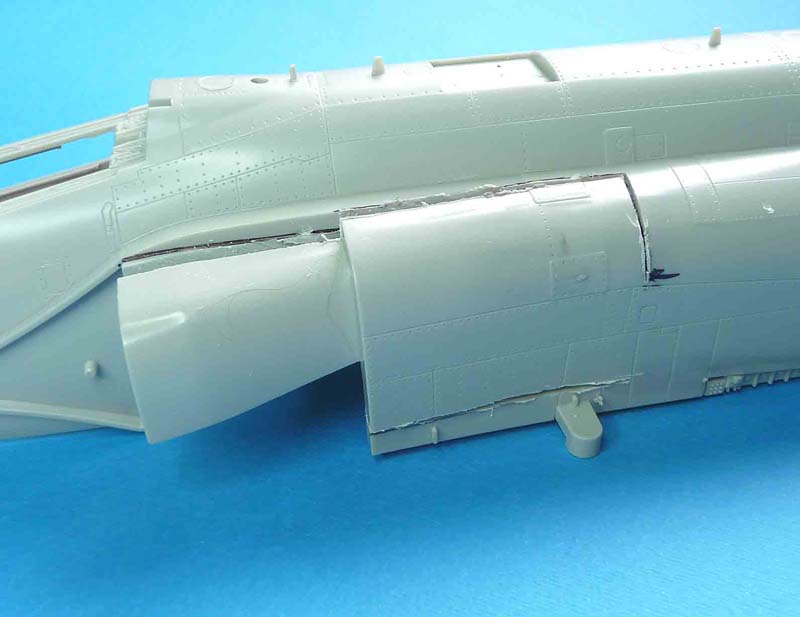 4. Make other cuts along the lines shown in Pics 4, 5, 6, & 7. The emphasis here is not to cut out this section, but rather, make it easier to bend to the new shape, which it will when the cuts are made.

Remember that the more identical you can make these cuts on both sides, the easier some of the next steps will be. Bad English, but you get the idea. 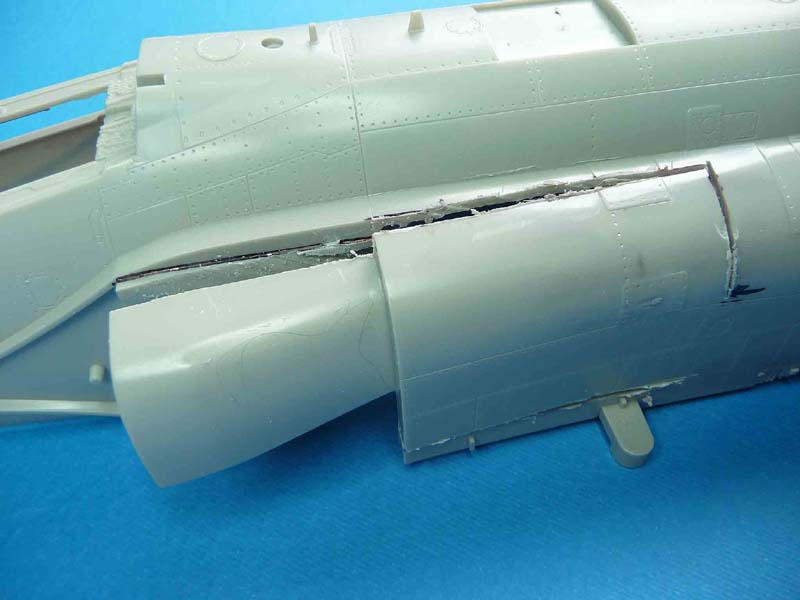 5. Since the cut above the wing mounting lug has caused the lugs to become rather floppy, that area needs to be reinforced. To do that, carefully measure and cut a piece of thick styrene (I used a piece of 1/8 X 1/8" ) that will precisely fit between the "lug pieces" and glue in place. The distance from outside edge to outside edge is 3 5/32".(Pic 8) For strength, I also drilled a hole though the fuselage strip and into the new styrene and pin it with some brass rod. 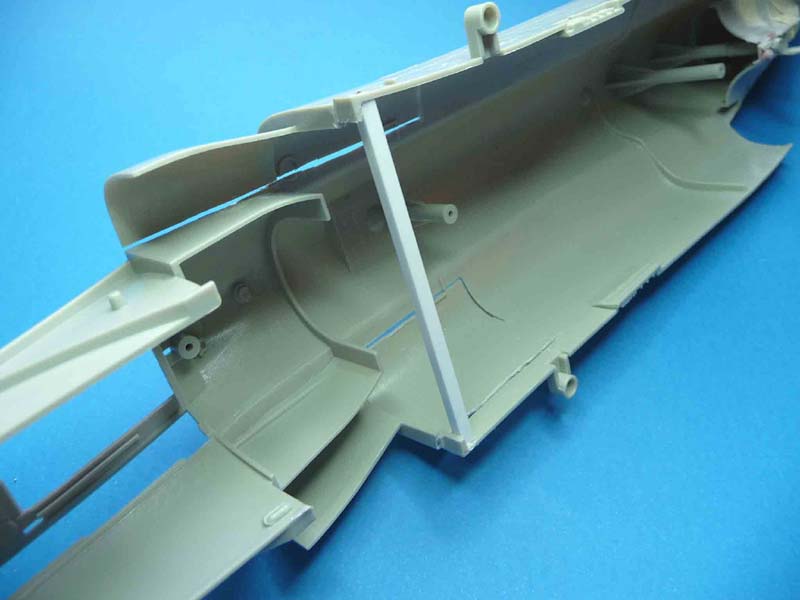 6. With the Intakes taped into place, bend out the large piece of inner intake/fuselage so that it will meet the modified intake. Now, while carefully measuring, glue in small pieces of styrene to hold the modified fuselage section in place. (Pic 9) 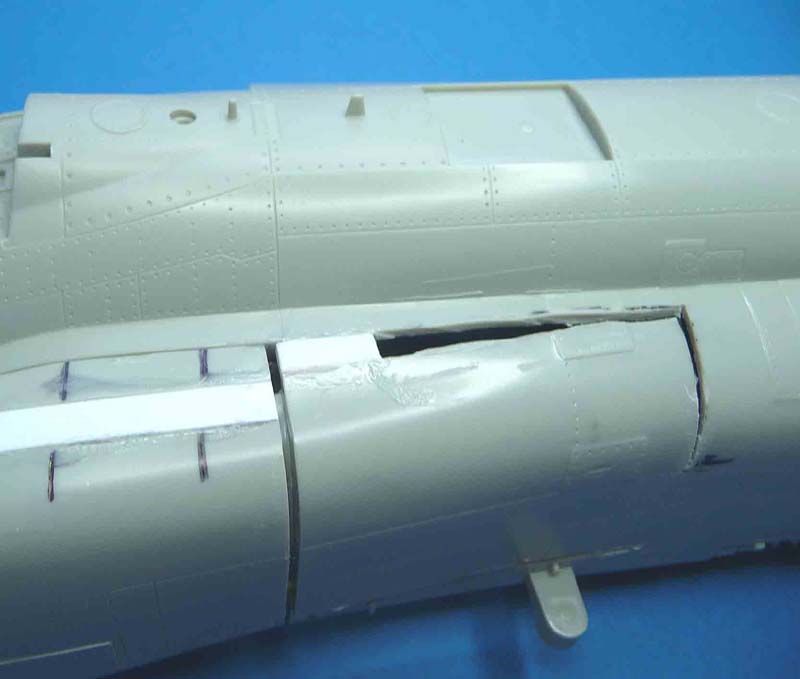 7. You will probably find that the lower parts of the intake and the fuselage don't want to stay in line, so I super-glued a small piece of brass wire to the intake and a matching hole in the thick edge of the fuselage. (Pic 10) Depending on space considerations, that might have to be removed when things are being permanently joined, but for the present. it allows more accurate work to be done. 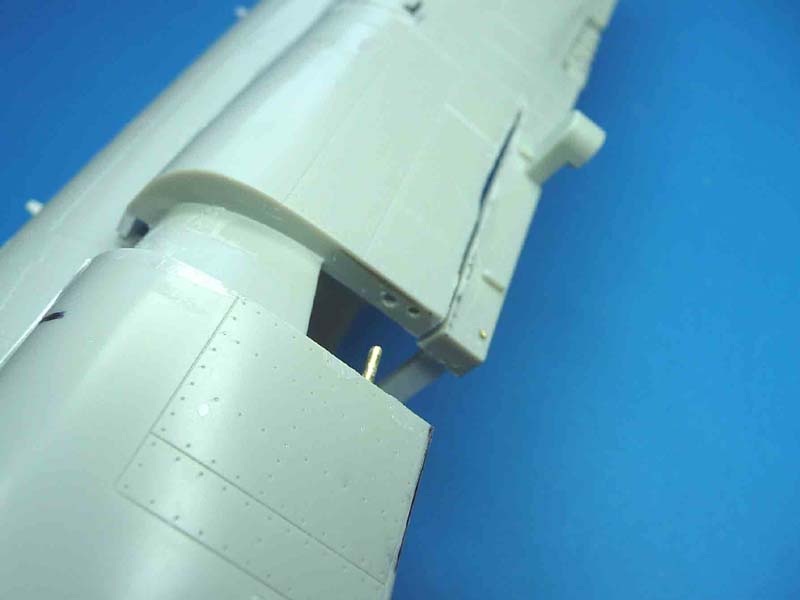 Pics 11, 12, & 13 show where we are in the build. The wing still fits the original mountings, and overlaps the wing the way should (I think). This also means that the wing is unmodified, so the thread remains the same. On to the inner intakes. 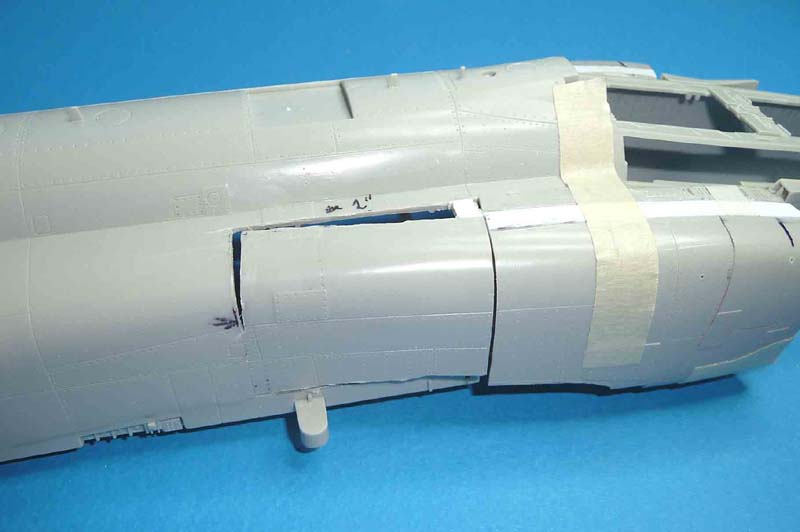 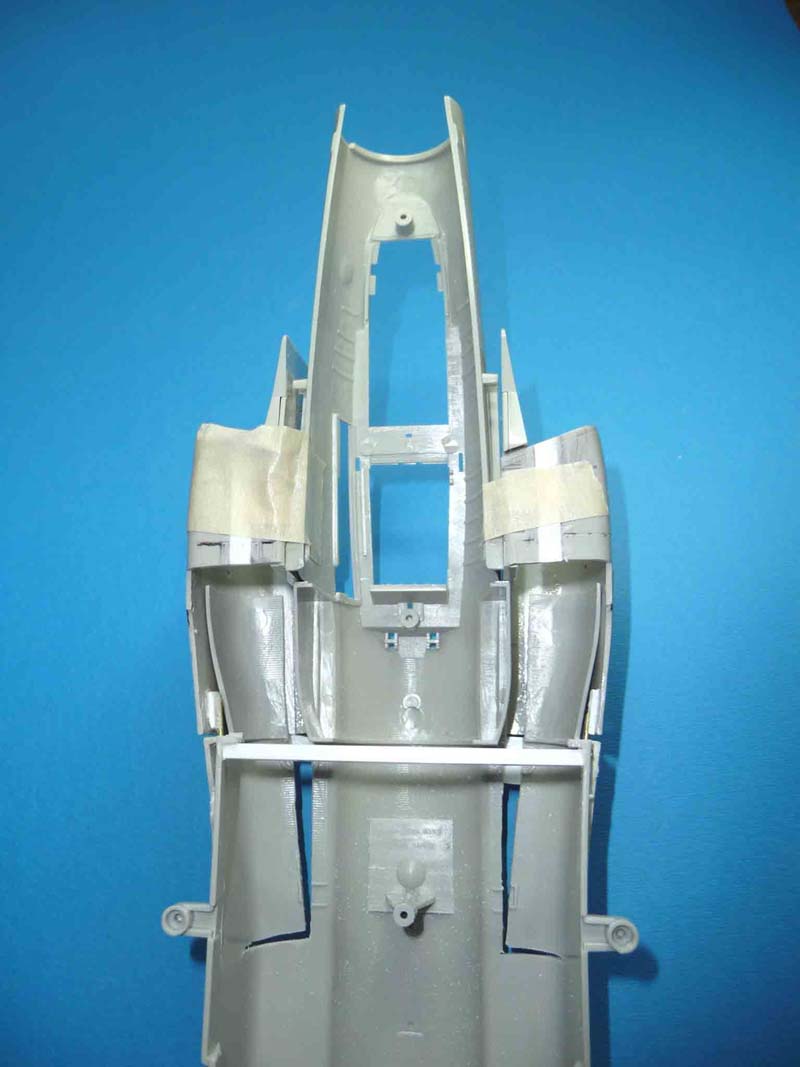 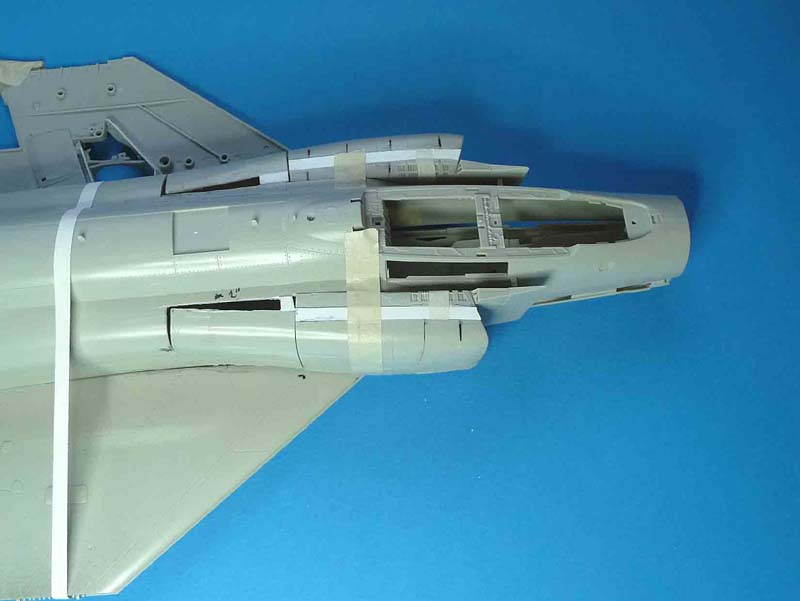 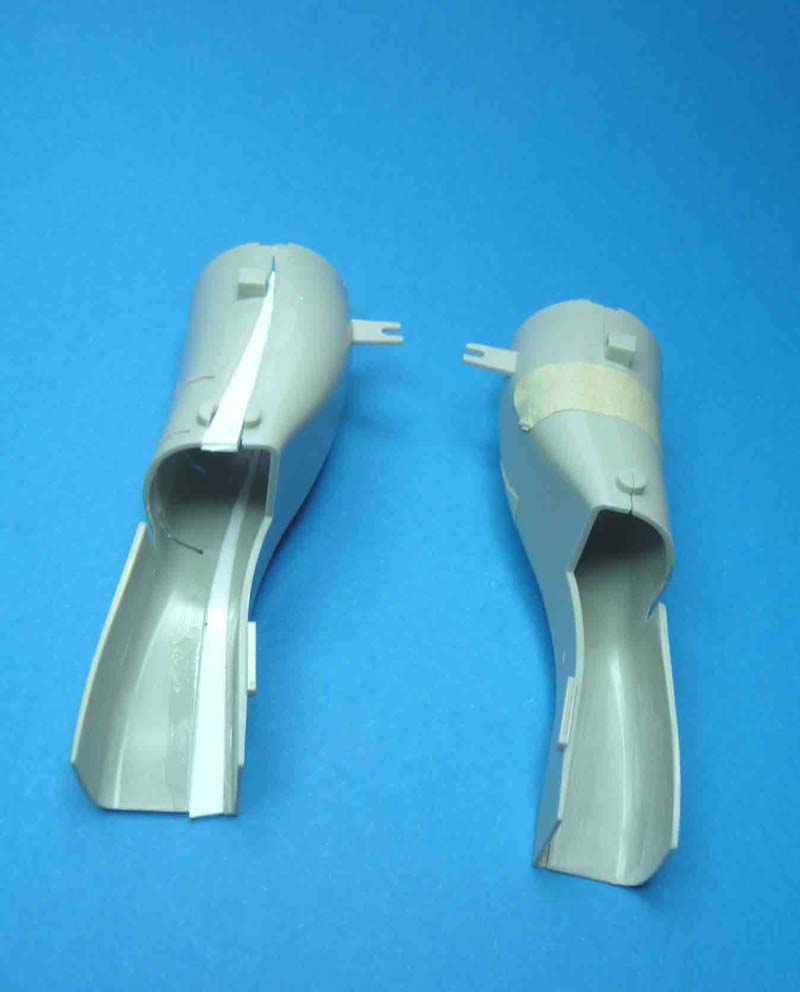 9. Pic 15 shows that the modified inner intakes fit into the fuselage reasonably well, although some small pieces of styrene will obviously need to be added before one can start trying to figure out how to sand the inside surface. 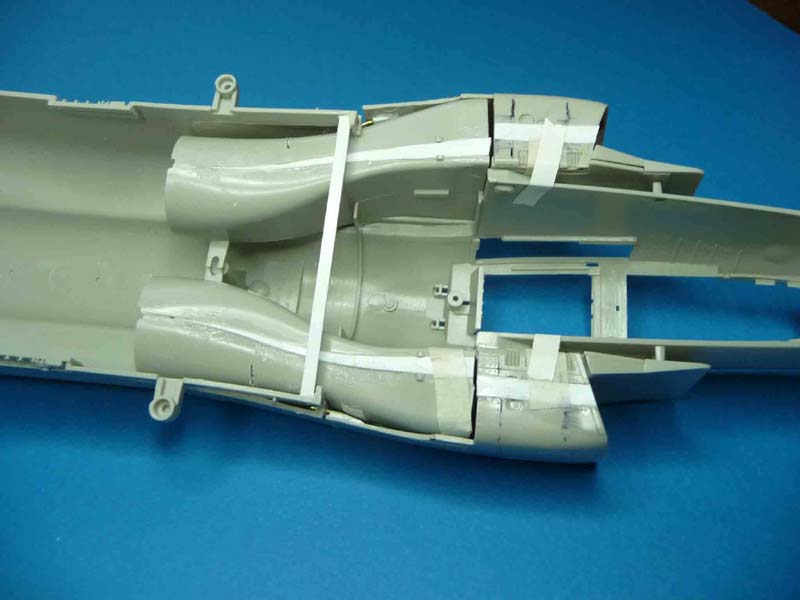 10. The picture of the bottom fuselage (Pic 16) shows that the bottom of the intakes do not meet the modified parts.Simply cut off the curved ends and splice in pieces of (you guessed it) 3/16" styrene. (Pic 17) 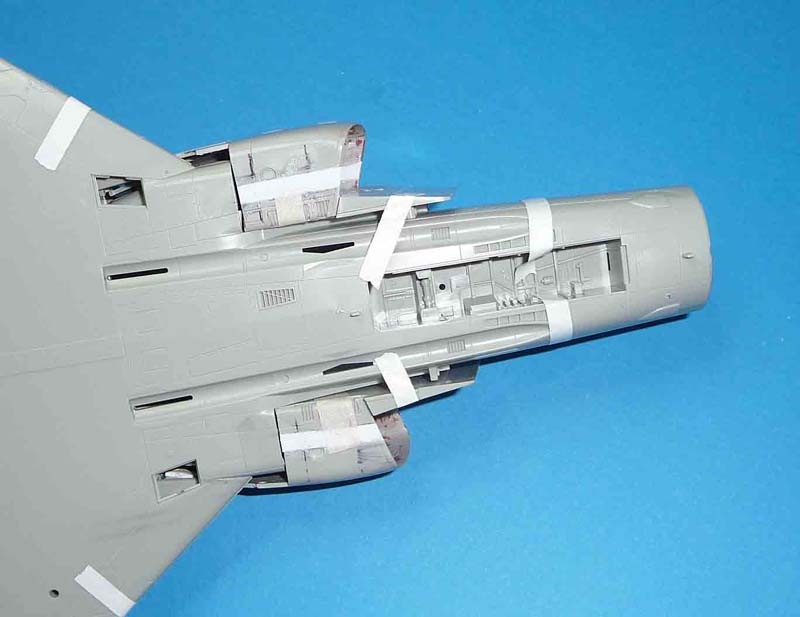 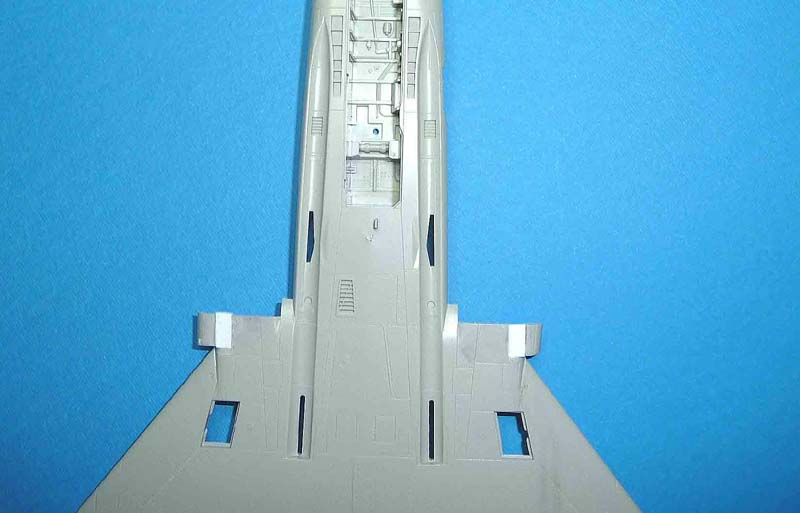 11. We are now down to just about the final step of the conversion, and that is how to handle the intakes. If you think I am going to present some new and wonderful way to do that inside sanding, keep thinking. But, remembering (with some pain) the hassle of doing this in two previous pre-seamless F-4 kits, I do have a suggestion: Look at Pics 18 & 19. 18 shows what the typical kit looks like at this point. What I did was to first sand the inside of both intakes to a knife edge. Now I cut a few slits, maybe 3/8" or so, in the forward edge of the intake, both upper and lower. You can now bend these outward so that the outer intake forces them into its outer wall. Yes, I know you have to fill and sand the slits, but for me, that is an even trade for not having to do the entire forward edge from inside. If someone has a better idea, let me know. 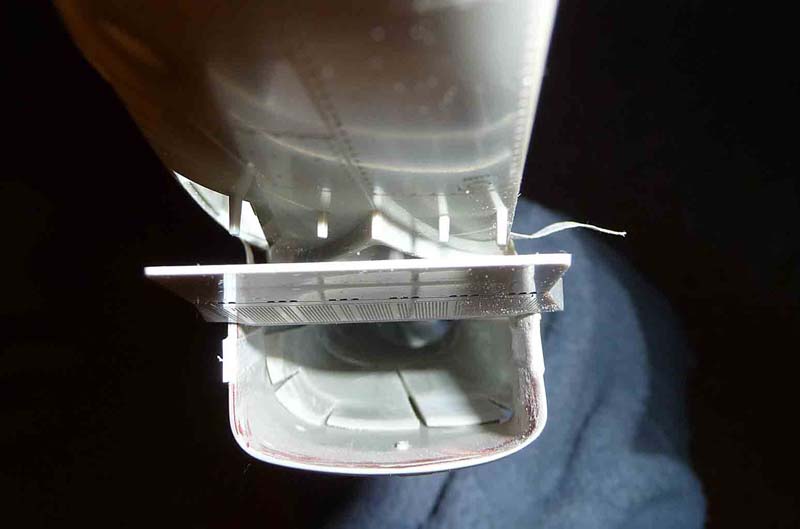 There is a lot of interior and wheel well work left to do, along with much filling, sanding, priming, scribing, filling, etc., but in essence, the conversion to the FGR is now complete. It may not be perfect, but I am satisfied. It corrects the biggest error on my original (the tread), and even makes a few changes from the WH FGR, although they are relatively minor.

All that now remains is the burner cans. I know that some folks are working on those, but I might, if I become sufficiently motivated, do another article on them. To anticipate a bit, the problem is that I used two boxwood, turned molds for mine, and they aren't really sturdy enough to do a bunch of duplicates. Besides, there is more detailing that could be added to mine if one really wants to, so I will have ponder the situation, and let you know--- 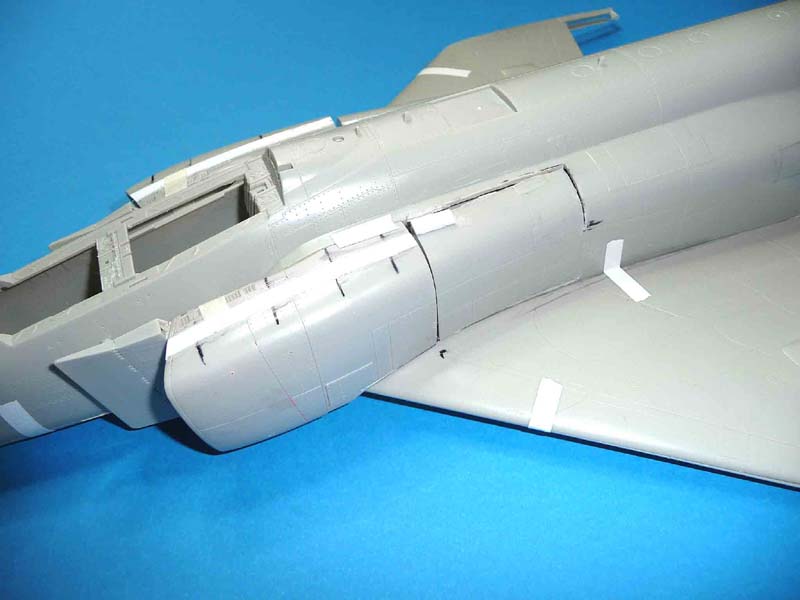 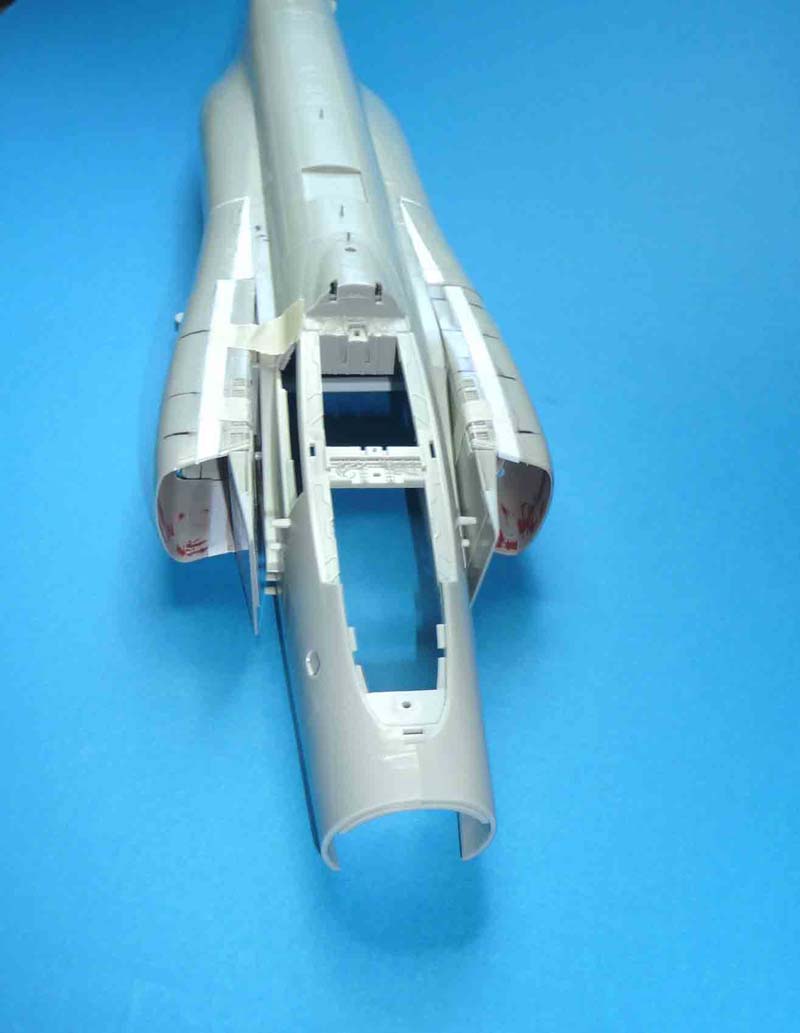 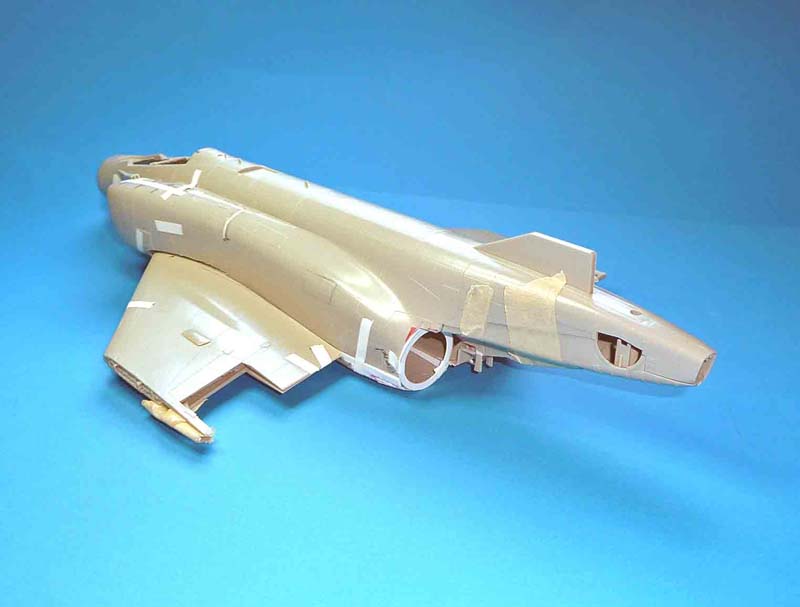 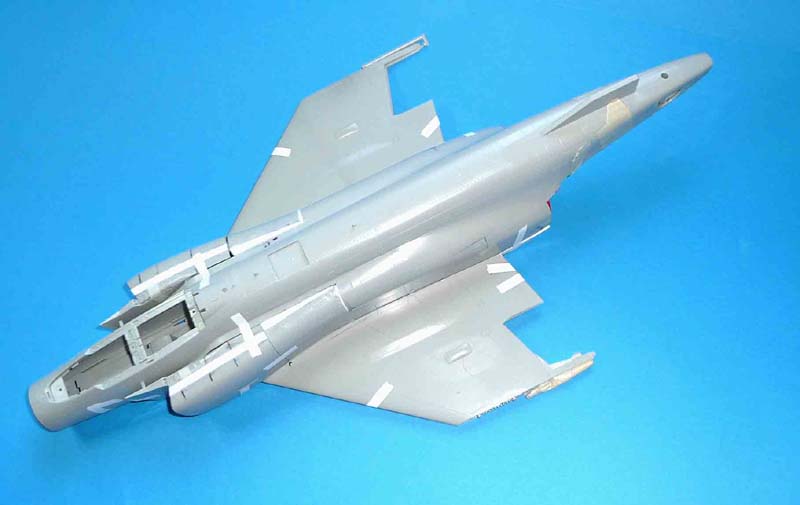