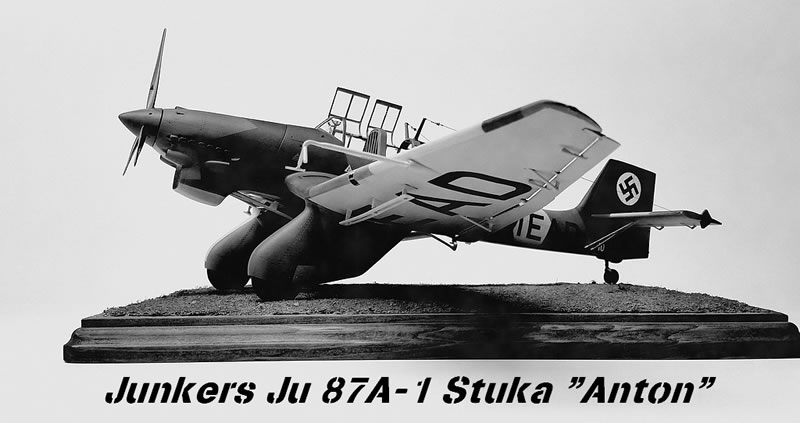 I just finished this one today, after exactly one month of working on it, pretty much all day, every day. I'm not usually one to get the newest kit the second it hits store shelves and, even if I do, it will normally sit for quite some time before I get around to building it. For some reason, however, I had to get this kit and buid it, as soon as it came out. I'm not a Stuka fanatic or expert, by any stretch, but there's something about the early A model Stuka (often referred to as "Anton") that appeals to me. Anyway, I started this kit with the intention of just doing an out-of-the-box "quick build". However, I started to see a few areas in the kit that I thought I could improve upon and things kind of snowballed from there. I have to thank all of the guys who followed along with the WIP thread, as many of them helped me along with photos, additional information and, especially motivation and inspiration. I want to give a special thank you to Alain, for pushing me to put more detail into the cockpit, as well as for the idea behind the first aid compartment and it's panel (which turned out great!). The kit's pit is not too shabby, but adding even more scratch detail to it and posing the canopy open to show it off was a great decision and I'm glad I followed Alain's advice and finally "saw the light" of his vision.

The list of modifications and additions is too long to get into here, but you can read all about it in the WIP thread. I did my best to explain and photograph everything as I went along. Overall, the kit isn't so bad. Some of the parts and assemblies fit as good or better than any other model I've ever built. Some areas are not as good, however. The kit has more than it's share of shape and detail issues, but I was able to at least improve the look of a lot of these things, at least to the point that it satisfies me. Other than a few flaws that I decided to live with (and a few more that popped out at me while editing the photos!), I'm very happy with the way this model turned out. It's very unique and looks great in my display case. I also learned a lot more about Stukas while building it and it also allowed me to stretch my skill set and try some new things. I hope you enjoy viewing it as much as I enjoyed building it! 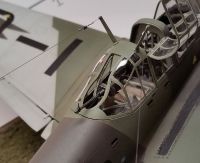