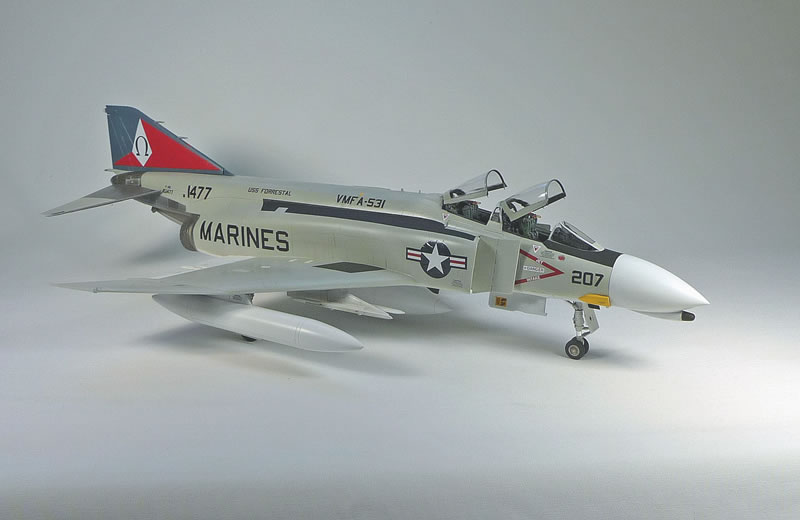 It would probably seem, to most people, that five 1/32 scale Phantoms would be enough for any one person to have on their shelves. However, being modelers, common sense does not always prevail, so, after staring at an original Cutting Edge F-4B conversion kit for years, and, knowing that there was an un-built Tamiya short-nose F-4 kit wasting away in the basement, there finally came the day that the total of built Phantoms on my shelves numbered six (see photo).

There is not a whole lot to say about the conversion; it is pretty straight-forward and the parts that I used fitted rather well. However, I will also say that about the only resin parts I actually used were the inner wing upper surfaces and one of the two supplied underwing sections (The other one can be corrected with sanding). Most of the rest of the conversion kit consists of parts that are identical to those in the Tamiya kit.

As a result of having built an untold number of these kits over the years, I have two Phantom boxes in the basement full of parts and pieces left over from various F-4 builds and FGR conversions. Those boxes supplied enough pieces and parts to more-or-less produce a B cockpit. The rest of the build was essentially that for any Tamiya F-4, with the additional changes necessary for the B.

The markings (mainly the vertical tail) were really the reason for building this model. The tail decal was left over from the short-lived Meteor-produced 1/32 scale Wild Hare kit of the FGR2. The decals in this kit were really very well done, and I have used them (or parts thereof) on three other F-4/FGR models. I am not sure if the decal sets are still available, but they truly were some of the better one I have ever used.

For those unfamiliar with this particular episode, the story, in brief, was that this particular U.S. Navy F-4B of VMFA 531 made an unscheduled landing (due to a mechanical issue) on the British carrier Ark Royal while on maneuvers in the Mediterranean. Because (according to one version of the story), a visiting British Admiral would not have been pleased had he seen the aircraft on his carrier, and because U.S. personnel were not welcome on Malta at the time (which is where the ship docked soon after the landing), the British crew painted the vertical tail to match their aircraft (892 Squadron) then hid it behind a group of their own birds. The trick worked and, once repaired, the airplane was launched and flown back to its own carrier.

Overall, I have to say that the build was rather straight forward, but I also have to admit that after about seven or eight Tamiya F-4s (not counting a couple of Revell kits from years ago), one kind of gets an idea about what needs fixing, and this particular project just gave me an excuse to go around one more time. 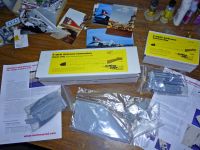 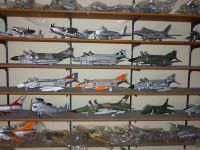 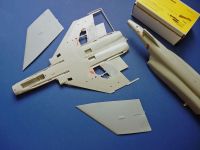