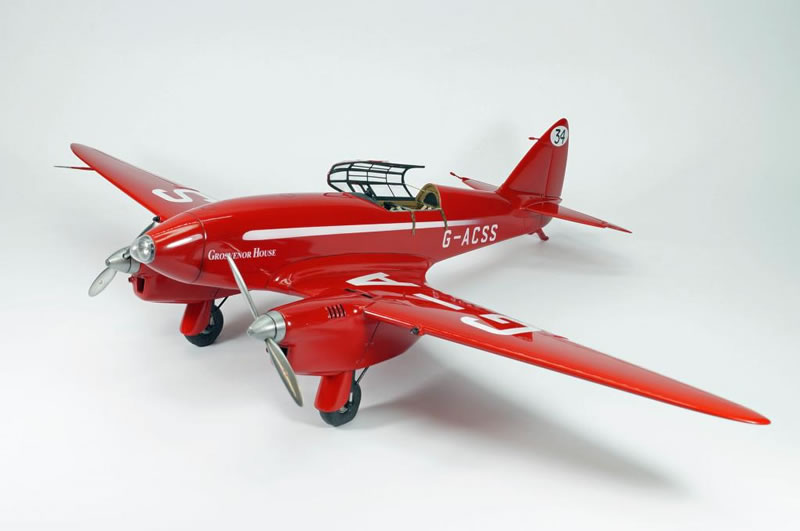 This is my newly completed 1/32 Aerotech De Havilland DH-88 Comet `Grosvener House' as flown by Tom Campbell Black and Charles W.A. Scott in the MacRobertson Air Race, London to Melbourne, 1934. They won the race, winning with an elapsed time of 71 hours. During my research I discovered that one of the mandatory stops was at Charleville, Queensland. I have a personal connection with that aerodrome, having flown in to it many times in a DHC-8 and it was a stop on one of the 4 sectors that formed my check to line as a Captain on that aircraft.

The kit represents the overall shape of the real aircraft quite well but needed some extra work to bring out the distinctive shapes that make this iconic aircraft into a sleek and beautiful racing machine. A lot of work went into applying the fabric effect to the control surfaces and aft of the rear spar on the wing. Similar efforts went into the construction of the canopy to replace the decal framing of the kit with real framing constructed from 43 parts of plastic card and aluminium foil. I worked on this kit pretty well every other day and it took 1.5 months from start to finish. I felt that the kit needed a new front instrument panel and as such this was scratchbuilt. Here is a list of the mods that I did to the kit.

Tamiya TS-8 Italian red (2 coats straight from the spray can) Followed by 2 coats of TS-13 clear over the kit decals and self masked and sprayed `comet'.

The is a build thread for this model in the forums.