I have got a part built MDC Ar-234 tucked away, and a Hasegawa 48th scale one languishing on the shelf of doom. I have always liked this aeroplane, but I can never seem to get one finished quite the way I would like to. A trip to Hannants found the 1/32nd scale Fly kit of the beast, and having more cash than sense, I got it.

I have never built a Fly kit before, or read too much about them but I was pleasantly surprised by the contents of the box. It is a limited run kit, and I have built a few of those, so no dramas.

Some nice tan plastic, with thin clear parts and beautifully crisp resin parts all topped off with a lovely decal sheet and some etched parts.

The fuselage went together well, the wings fitted OK, after a bit of sanding and scraping, and pretty quickly, I had an Arado.

I used RLM matched colours from Xtracolor, which I have used on numerous occasions, and the decals, though thin, went on well and settled down nicely over the fine engraved details. I even tried some pre-shading on the underside and was happy with the results.

Time to weather the top side.

Oh dear! Now it went down the pan, hit the fan, turned pear shape, etc, etc. Despite sealing the paint and decals with Klear, as usual, the wash attacked and blistered the paint in a number of places, but only on the top side and only on one of the colours.

I got so upset, and annoyed the Arado nearly had a premature test flight out of the window. The model was put aside for a few days and I walked away from it, thinking it would end up alongside the MDC and Hasegawa kits.

However, I decided it was not going to totally beat me so I went back to it and had ago at fixing things. That is why the topside features some excessive paint wear in places, as that was the only way I could think to fix the damage to the paint work.

So here is my third attempt at an Arado Ar-234.

The model is in the markings of a machine that was used to attack the Remagen bridge and was shot down by American AAA (nearly getting shot down by me some decades later!).

The decals for this kit come from the MDC kit, not the Fly kit which provides markings for a captured machine flown by the USA, and the UK along with an operational Luftwaffe machine and a test aeroplane based at Rechlin. Also, the large bomb, "Herman" is from the spares box, as no bombs are provided in the kit.

So when examining the model, please be aware that the thing didn't go at all the way I wanted it to. 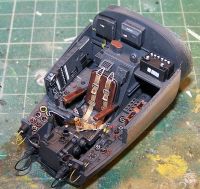 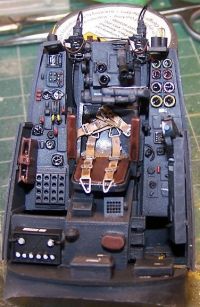 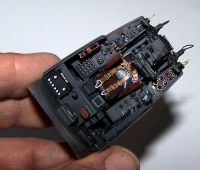 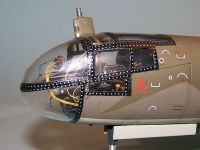 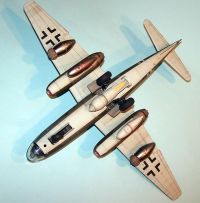 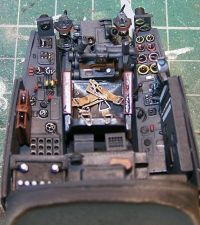 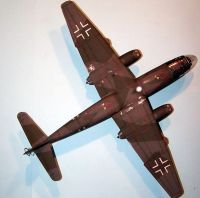