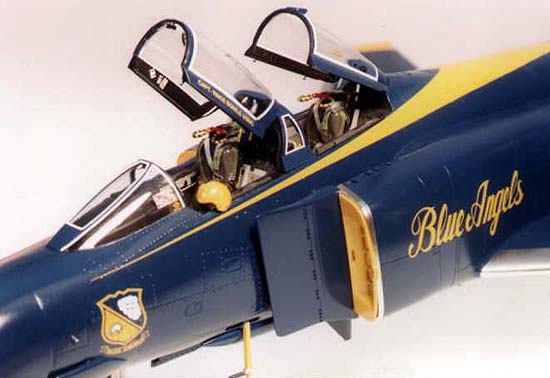 The first time I saw this kit built was on a business trip to California. I knew in the first few seconds, I HAD to build this one! I was able to obtain one in short order (the Hobby shop was more than happy to accommodate me!). I began building it two weeks later on my return home. This is the start of our story.

My first impression of the kit was awe, to see all this plastic with the delicate panel lines, and rich detail was just phenomenal. The sheer number of parts was astounding. I had read a review, but was still unprepared for the sight before me.

I began, as I always do with choosing a subject. I have found it is easier for me to keep focused, and directed if I know what the final plane is. I chose the "Blue Angel" scheme to depict, I have seen it in 48th and 72nd before but not in 32nd . I had located a source for the Yellowhammer decals (Meteor Productions), and with that I had the basics of the paint job. I chose to use a pre-made color instead of mixing one because of consistency. I was afraid that I couldn’t mix the same color twice, so I went with the Model Master Acryl "Blue Angel Blue". Its seems to be a very good color and matches well with the chips I had. I will discuss this more later.

The cockpit went together smoothly, with no major problems. All the panels that are in the kit are very well molded and the details are crisp. Because of my subject I had to do some changes, but if I were to build a standard F-4J these would be more than satisfactory. I used the basic kit pieces for the most part, but did add a little bit. The instrument panels on the actual aircraft were devoid of many of the "mission" equipment panels. This wasn’t necessary for demonstration aircraft anyway. Besides it did save considerable weight. The cockpit panels were altered using the instructions provided by Yellowhammer. They really did their homework, and had a really good source for info (former team "boss" #1 pilot, Bill Wheat). When the mods were done I added faces to the instruments using Reheat instrument faces. The kit uses black decal film, and that just wouldn’t do. I used clear nail polish to simulate the glass over the dials. The rest on the cockpit was stock kit except for the seat belts and buckles. I wanted to use the Waldron buckle set, but was still unsure on what to use for the belt material. On a whim, I started playing around with nylon ribbon. I found that if I coated it with clear nail polish before trimming, it didn’t fray. I used this technique and used an olive drab color for the belts and a white for the upper seat restraints. The Waldron set looks very nice attached to them, and the ribbon has a nice fabric pattern to it. I used the same method to build the foot restraints and upper side belts as well. Painted masking tape was used to help simulate the covers on the top of the seat belts. I used the Verlinden "Lock-on" for the F-4J to help with locations for all of this, otherwise I would have gone insane trying to figure it all out. There are resin seats available, the choice is really up to the builder. I found the kit seats to be adequate for my use, and they are "nothing to sneeze at" on the quality scale. The detail is good, but the discriminating modeller will choose to add a bit here and there. 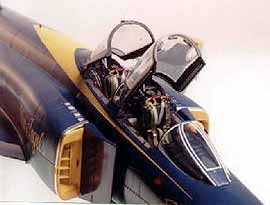 The fuselage and wing went together smoothly with no major problems encountered, except for the intakes. This is the biggest shortcoming with this kit. The fit is at best "bad", and a sizable gap is present from the intake cover’s inner edge and that of the intake itself. I had tried to correct them with sheet styrene, but alas I gave up and just chose the easy way using FOD covers by Reheat. In retrospect, I guess Seamless Suckers’s intakes would have been nice, but my allowance was running thin already! The other area that was tricky to clean up was the wing fold area. The fold area is tricky to get the hinge to line up and not create too big of a gap in the process. I did lose a lot of the engraved detail in the fold, that I had to rescribe after filling it. I chose not to install the wing pylons. The "Blues" rarely carried external tanks, and no inboard pylons, so all of these locator holes had to be filled on the underside of the wings. A little gap filling CA did the trick. I used CA mostly and a little putty, for what few places needed it, not many. The wing joint wasn’t bad a little CA here, and the intake covers needed a little. Other than that, the model went together very nicely. The basic fit of this kit is worlds better than that of the previous Revell release of this aircraft in the same scale. The one piece fuselage really helps matters a lot though!

The one thing I did find out about the model’s outline was that it was basically correct, I did have to remove some "extra" panels. Tamiya used, of all things, a "gate guard" to reference the model. This aircraft had various battle damage repairs, and other extras. It was probably used to help train the sheet metal techs before it became a "gate guard". So with a little help from Detail and Scale, and a my trusty scribing tool (dentist’s scribe), I set right the panel configuration. With that done it was off to the paint shop.

I used Testors Model Master Acryl (new formula) to paint the fuselage and trim. The Blue is "Blue Angel Blue" and the trim is "Chrome Yellow". The blue is pretty close to most of my references, but I think it would not be for the newer F-18 birds. In my opinion, it looks like they are more lighter in color now. The undercarriage was spray painted (yes, some people still use it!) from a flat white I bought a Wal-Mart. Only 99 cents a can, what a bargain! I have found it works quite well and I have used it several times already. After the gear was painted white, I used bare Metal foil to detail the struts, and used wire strands to simulate brake lines and hydraulic lines in the nose gear. 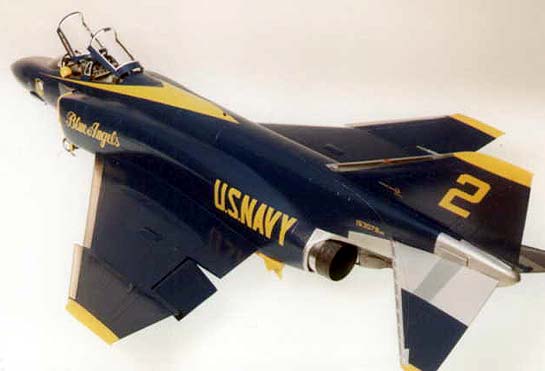 After painting, the decals were applied. The kit’s basic decal sheet is extensive and appears to be in register color-wise. If building a standard "fleet" phantom, they would be enough. All the stenciling is included, and the only reason that you would need any aftermarket decals would be to depict another squadron of you choice. Since I chose the "Blue’s" scheme, the only sheet available is that from Yellowhammer. The only problem with these is they are only correct tail numbers for the 1969 season (six aircraft in all). The sheet does provide the option to the builder to build any of these six aircraft. Their research, as stated before is very thorough, and covers more than just decal placement. I was apprehensive about them since they covered so much. The first of my concerns was opaqueness of the film, the second was getting them to conform to the complex curves on the fuselage. Both of my concerns were well answered, the first by the wonderful Yellowhammer sheet! They did a beautiful job double printing them and NO bleed through is visible. The second was answered by a little Solvaset. After the decals set, I applied eight thin coats of Future, a bit much by most standards, but display aircraft were waxed and polished almost daily.

The canopies are the second most disappointing item in this kit. True to current Tamiya fashion, they were molded with the sprue attached to the side of the canopies. This makes removal and clean-up a chore. I used a heated # 11 Xacto to remove them from the sprue. The philosophy behind heating the blade is that the clear will not fracture, because less force is needed to cut through the plastic. Clean-up was then done using polishing sticks to remove the excess, and to buff it out overall. A few dips in Future clears them up well enough for use. Who knows? In a few years there may be some nifty vacuum formed ones available! 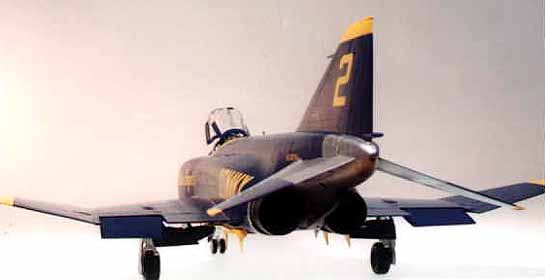 I then attached them to the frame, I used the new canopy cement available through MicroMark. It was a bit cumbersome at first, but after a few trial pieces, I got the hang of using it. It works very well and I will continue to use it for my canopies in the future. The next step I did was to add the Eduard photo-etch canopy frame detail pieces, they really do enhance the canopies. The set is also good for the F-4C/D from Tamiya as well. After this was assembled and painted, I added wire to the frame to simulate the a seal of the frames. This completed the canopy assembly, and I attached them to the fuselage at this point. I did chose to use white decal film to simulate the gasket around the major points of the canopy glass. Some photographs show this as a prominate feature, some do not, again modeller’s choice. 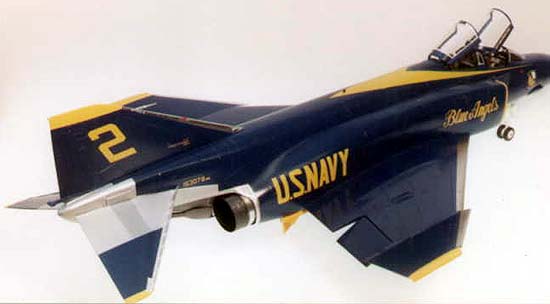 Some extras that were "garnish" were a helmet from the kit’s pilot, hollowed out and painted. Also, I added a reduced VFR sectional map (of Austin, of course) in the window. WHEW!! Six months (approx. 300+ hours) later …VIOLA! I think it was well worth it. I would highly recommend this kit to anyone who wants to build a "good" F-4J in 32nd scale. The price is money well spent!