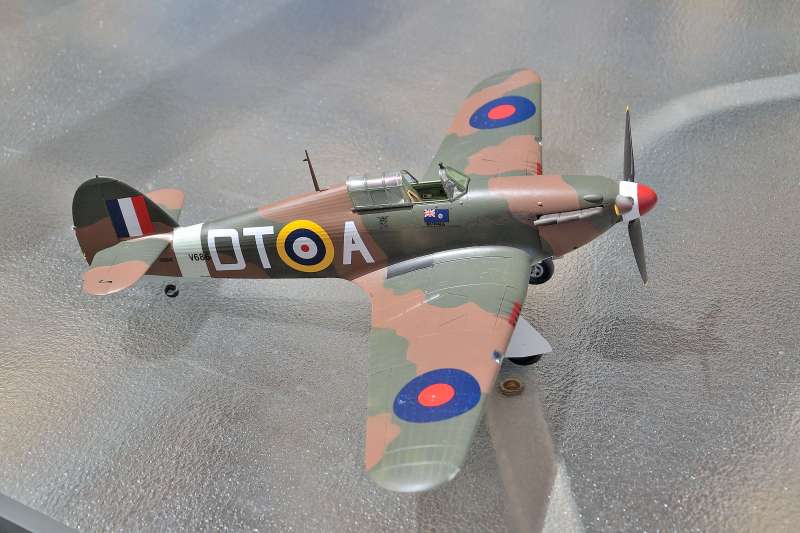 I would like to present to you my rendition of Trumpeter’s 1/24 scale Hawker Hurricane. I finished this model back in March, though it took me a year of on and off building, plus fiddling with the photos to get them to an acceptable standard.

The model represents the Hurricane Mk 1 flown by Squadron Leader Robert Stanford Tuck, CO of 257 squadron, RAF, around the Battle of Britain. This is actually the first Trumpeter kit I’ve built, and I have rather mixed feelings about it. On the one hand, parts fitted well, but the engine in particular is a big disappointment. Aside from being too small, some of it is just wrong. The ducting from the supercharger to the inlet manifold is missing, so how does Mr Trumpeter think the air fuel mixture is going to get into the cylinders?? For these reasons, I decided not to open up the fuselage sides any more. The spark plug leads supplied were not that difficult, despite some people’s opinions, and extra detail was added in the form of hydraulic lines made from brass 0.5mm wire, and the engine mounts were corrected as much as this kit allows.

I used the Trumpeter brass detail kit to provide extra detail in the cockpit, together with some fine copper wire to replace moulded lines. The kit joystick grip was enhanced with more fine wire to better replicate the pilot’s handgrip. Then, as there was no detail visible behind the pilot’s seat, I added some of the fuselage structure behind that seat. I built a jig from scrap plywood and cardboard to build each side of the warren truss structure from plastic rod that is the same diameter as the cockpit’s frame, then joined together using the same plastic rod. The basic structure was then attached to the cockpit frame, and further rod was added to finish replicating the real thing. I got the idea for this from the works in progress section of this website. A rear wing spar was fabricated to finish this off which caused problems with wing attachment. I got around this by gluing one wing top half to the lower wing, sliding that over my protruding spar, then gluing that to the assembled fuselage, then gluing the other wing top into place and setting the wing dihedral with sticky tape across the fuselage, one piece from each wing tip. Before tackling that issue, I also added some aluminium tube to replicate the radiator pipe that passes through the cockpit on the starboard side. Lastly, before gluing the fuselage together, I painted the inner rear fuselage in a rusty red, similar to the colour dope applied to the linen on the real thing, but that turned out a bit too dark. I have the Trumpeter Hurricane Mk2C in my stash, so when I get around to that, I’ll mix up something lighter.

The wing guns were assembled as per the kit instructions, with the addition of more wire to replicate the gun pneumatic lines, as displayed in pictures I found on the internet. The wings were then assembled as outlined above and the tail surfaces added. I also let in some 1.5mm brass channel to the fuselage, and matching rail on the canopy to allow the plot’s canopy to open and close at will. The model was then prepared for painting via the usual putty and sanding, but there wasn’t much required other than around the wing and tail joints. The model was then painted with a mixture of rattle can for the black wing undersides, and airbrushed with Model Master oil paints. Finally, the undercarriage was added, and the hydraulic brake lines that are so prominent on Hurricanes were fabricated out of telephone wire, leaving the insulation on to replicate the flexible portion of these lines. Some light weathering was done by painting some of the plane in silver before airbrushing the camouflage over the top then scratching away at it, and cordite and exhaust stains were added with Tamiya’s weathering sets. The propeller was also added here, but disappointingly, the spinner is a little too large in relation to the diameter of the fuselage. I think this “mismatch” may have been the case with the real thing, but not to the extent depicted by Trumpeter’s effort.

I have wanted a large scale Hurricane in Stanford Tuck’s markings ever since I built the old Revell 1/32 kit in these markings for a friend back in the early ’70s, and I enjoyed building this despite its glaring errors. Overall, the kit is not bad, but not brilliant. The Airfix kit is arguably better insofar as Trumpeter’s engine is ridiculous, and the too large prop spinner, but this kit does go together well, especially if you set the engine/firewall assembly into a fuselage first, then the cockpit assembly, allowing each to dry first, then add the other side. Regarding the engine, I may do something more with that when I build the Mk2C, so that it becomes something more “displayable”. It would be great if we could get an Airfix Typhoon type Hurricane in this scale, or a Tamiya 1/32 Hurricane.

Since finishing this, I have just finished a 1/24 Spitfire, which I will submit here once I have taken some pictures of the completed model, which I am very happy with. This year is the 75th anniversary of the Battle of Britain as many here may realise, so I’ve decided to build an example of each of the main single engined fighters by way of commemoration, in 1/24 scale. Alas the models in my stash are not all BoB era, except the Hurricane, and the Spitfire is a Mk V. I have just yesterday started on a Messerschmitt 109K, so I guess these collectively represent the entire war as well. 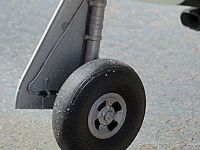 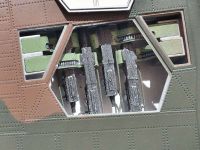 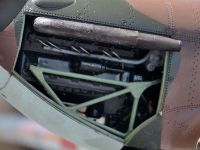