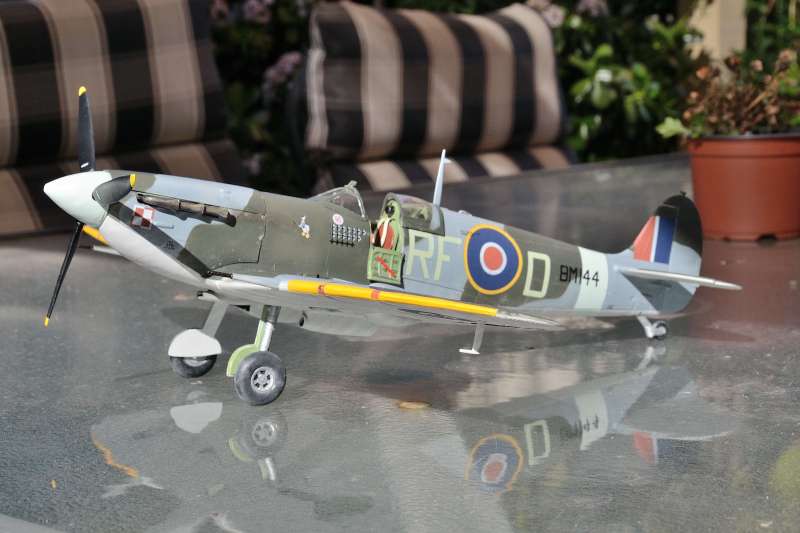 Here is my latest build, the 1/24 scale Airfix Spitfire. I bought this model in 2001, and it is a re-release of the old ’70s kit, with additional parts supplied to modify their old Mk 1 to Mk Vb or tropicalised Mk Vb. I started this build in mid March this year, and finished it around the end of the first week in July. Additional parts were added in the form of Eduard seat belts, Airscale instrument panel and bezels, together with Master B wing cannon fairings. Additional reference was made repeatedly to the Spitfire site http://spitfiresite.com/2010/07/anatomy-of-spitfire-cockpit.html and to screenshots recorded in MS Flightsim X of the A2A Simulations Spitfire virtual cockpit, which they have replicated extremely well, as with the rest of that plane.

Of the 4 months taken to build this plane, I think I must have spent about 1 month cleaning up the parts. In a word, nothing fitted. The moulds are clearly very old and worn, and all the parts require a lot of cleaning, drilling and filing, but it was worth the effort. Although I can see errors on the kit, some of which I’m bound to say are mine, in the end, it turned out well. I made the decision early on to scratch build cockpit and wing detail, and by and large this turned out well, given my small experience in scratch building parts. Detail in this kit is sparse, and much scrabbling through my parts box preceded the build.

I started with the engine, and used a lot of parts recovered from an old Airfix Hurricane engine. My initial thoughts were to use that engine entirely, but after some experimentation I decided that I may have trouble fitting it to the Spitfire. In the end, I used the entire supercharger assembly, the rocker covers, ignition and some sump detail, as the detail on these parts was noticeably superior to the parts provided in this kit. The ignition system was made up from ex-Hurricane bits with soft wire spark plug leads. Additional plumbing was made up of 0.5mm brass wire for the oil lines, and 1.6mm copper tubing for the coolant lines. Extra detail was also added to the engine firewall using brass wire and scrap parts.

While the engine was being built, I started on the cockpit. Detail and parts provided in the kit are sparse, especially for such a large model. Given that I was going to add detail, I decided to make it so that I can vary it’s display and improve visibility into the cockpit. Two pivots were built and let into the port side fuselage half to enable the pilot’s door to hinge down or to close up the cockpit as desired, and a hinge rod glued to the pilot’s door in place of the moulded in door hinge. Next, the instrument panel was thinned down to enable the Airscale panel to be fitted after painting the panel. Various switches and the fuel primer were added and the entire IP glued into place on the starboard side fuselage half. Other details were and wiring plumbing were added before adding in the undercarriage lever, then hydraulic lines were made from brass wire. The oxygen bottle was mounted having been drilled to accept the pilot’s air hose and this was glued into place followed by the pilot’s seat frame minus the seat. The air tube was then fitted through this frame into the oxygen bottle, and wiring added to the accumulator that sits behind the pilot’s head. The rudder pedal and control column was then added and the rudder pedal rods were extended with plastic rod and brass fittings from the Airscale bezel set, followed by operating cables for the elevators and rudder being strung through the fuselage and mounted to a centrally mounted rod in the tail. These can be seen though the transparency behind the sliding canopy – just!! Detail was deed to the fuselage port side with scrap box parts, wire and trim cable panels were made using metal from an aluminium can (a first for me and one that highlights a need for a few more tools). The fuselage was glued together now, and the opening door was added to the assembly once it had dried and the join prepared for painting. A rib was added to the fuselage near the wing joint to allow mounting the radiator flap operating handle. Lightening holes were drilled out with a pin vice this time, as the ribs added in the fuselage halves were done with a Dremel and these turned out poorly.

Attention now turned to the wing construction. As this was to be a Mk V, holes were cut in the wing halves for the cannon fairings and 2 machine gun doors cemented in place. The parts provided to do this needed a lot of fettling to get them to fit correctly. The guns were painted and mounted in the already painted bays with the thought of adding extra details for wing structure and operating pneumatics, but when I trial fitted the top wing, I found that there was no way to fit the cannon access hatches as the drum feed provided for the cannon was too big, even allowing for thinning the cover. So I removed the cannon drums and cemented the covers in place. A lot of time had been wasted with this – very annoying. The Airfix kit provides no wheel well detail; just a hole in the bottom wing, so this was made using plastic strip, sheet and more can aluminium. Brake hydraulic lines were fabricated from old phone wire and added to the rear of the undercarriage, but this is not really visible as displayed. Before gluing the wings together, I made sure that I could securely mount the Master wing cannons in place of the plastic parts provided by Airfix. I’m very glad I used these as the plastic parts provided by Airfix for the Mk V conversion had almost no surface detail. The Master parts had plastic extensions glued to the back that connected with the kit’s cannons to ensure strength.

Final assembly involved mounting the wings to the fuselage and setting wing dihedral. Very little filler was required here. Once dry, the horizontal tail surfaces were added, together with the Master cannon fairings and underwing radiators, which had been painted and assembled earlier. The windscreen was added after being masked, and the cockpit was also masked off. All other openings were also masked off or stuffed with sponge cut to an appropriate size, and the undercarriage oleos and wheels were masked too. The model was then cleaned prior to priming and painting with Model Master oils, and sprayed with rattle can silver around the forward fuselage and wings to facilitate weathering later. First the fuselage band was sprayed in Sky type S then masked before painting the undersides in light ocean grey. Next the upper surface camouflage was added after masking off the undersides. Most of the masking was then removed except over the transparencies and undercarriage and the model sprayed with satin varnish. I find a satin finish more realistic as this gives a moderate reflection of light as you would get with a painted metal surface. Decals were added followed by a second coat of satin varnish. All remaining masking was then removed and the engine exhausts, cannon barrels and propeller assembly added, followed by some light weathering. This is only the second time I’ve tried adding some weathering and wear and I’m passably happy with the results. Tamiya’s weathering rubs make it a lot simpler than it used to be. Finally, a door latch and pry bar were added to the pilot’s door. Some believe the pry bar was not fitted to Spitfires after 1940, others say it should be there. I made mine based on pictures of various later Spitfires, so I’m guessing this was not always a standard fitment. So much was changed from variant to variant, and field mods so prevalent that it’s hard to say what is and what isn’t a standard for wartime machinery.