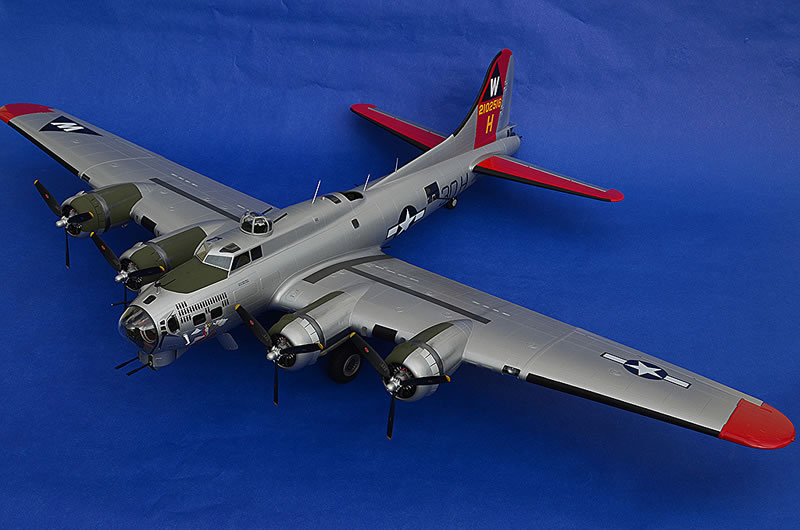 The HK Models kit needs no introduction and was for the second time, a joy to build. Having seen a few of these kits made up as war-beaten WWII aircraft, I wanted to do something a little different, and thus decided to build this version as a modern day warbird. Most preserved Forts in natural metal gleam like a mirror - something that terrified me, so I went instead for the Experimental Aircraft Association's 'Aluminum Overcast' which is operated from Oshkosh, Wisconsin, which is actually painted silver rather than being in NMF.

Being a Vega block 105 aircraft, she never saw combat, as it was actually built too late to see service in WWII, and instead went straight to the boneyard as 'surplus' before being bought in 1946 by Universal Aviation for aerial mapping purposes. It was sold again in 1947, this time as a cargo hauler which required numerous modifications, before once again taking on the role of aerial mapping platform in 1949, spending 12 years in the Middle East. By 1966 another sale ensued and the B-17 was used as a chemical sprayer back in the US, before its final role which began in 1966 as an aerial tanker and fire bomber. After retirement from this role in 1988, she was purchased by the 'B-17s around the World Foundation' and subsequently donated to the EAA, where a thorough restoration to WWII configuration began. She's been touring the US since 1994, and proudly wears the colours of 398th BG which flew from Nuthampstead during the war.

Although she's 95% authentic in comparison to her WWII counterparts, she does carry a full, modern avionics suite, as well as extra passenger seats in the rear fuselage, radio room and flightdeck for those lucky enough to enjoy a flight in her. The upper turret is just a dome with dummy barrels fitted to improve access to the flightdeck, but the ball turret is fully operational.

I carried out the simple modifications to the HK kit to bring it up to 'warbird' status by scratch-building the passenger seats, removing and filling the radome on the top of the nose compartment, adding the modern aerials seen on the aircraft and leaving out the top turret mechanism. Armour plate was removed from the pilots' seats, and the flightdeck oxygen system was also removed. I painted the interior olive green as the original, as unlike her wartime sisters she's painted internally. Wooden floors and ammo boxes were recreated using the superb HGW decals, and a final touch was a scratch-built rear access door and entry step as well as a ladder stored in the bomb-bay as often seen when these Forts are on tour. Decals came from KitsWorld, and paints were automotive acrylics. 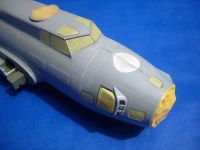