Here is the Pacific Coast Models 1/32 scale Spitfre XIVc. I did replace the scrawny kit landing gear struts with SAC white metal struts. On viewing the photos of the completed model, I have raked the landing struts a few more degrees forward. The elevators were cut out and positioned with downward deflection as seen in almost all photos of Spitfires at rest. This is the third PCM Spitfire kit I've built and I appreciate the low parts count and resin and color photoetch provided. Finished as VL-P of the No 322 (Dutch) Squadron in March 1944, using the excellent kit decals that are printed by Cartograf. Weathering was limited to panel line wash, lots of oily residue on the belly, exhaust stains, minor wear of the wing root, and grunge around the wheels and landing gear. Note that I did NOT paint the crowbar red! 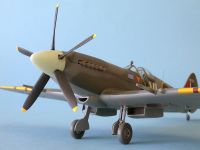