Building Your Own Vacuum Forming Jig 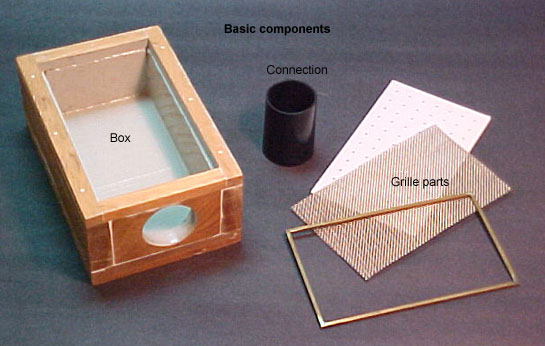 This is all you need to make your first vacuum forming jig.

Start with a Small One

Vacuum forming is one of the oldest techniques in plastic industry, and it has found its way in many modeling branches. Everyone remembers ID Models and Rareplanes kits from the past. It still is the only game in town in many cases, particularly for large scale subjects which are not comercially viable for mainstream manufacturers.

The other side of the coin is that vacuum forming is a cheap, yet extremely valuable method to produce many kinds of parts at home. Yes, you need a master (mold), but almost everything can be used to make a master for vacuum forming: plaster, car filler, wall putty, resin, balsa wood, and even injected kit parts. And of course, a vacuum cleaner is also required. It will provide the suction necessary to conform a heated plastic sheet over the mold. So, the word vacuum is somewhat misused here, but that's another story...

I won't describe the method here, since most of you are familiar with the technique. Keep in mind, however, that the nature of the process doesn't allow you to reproduce tiny details. The idea is to create the part with its correct dimensions and shape - a shell on which smaller details can be added later. A short description of the technique can be found in many internet sites.

In this article I will show you how to built your own vacuum forming table. It is a small one, aimed for making large scale canopies and small parts like landing gear doors, rudders, external fuel tanks etc. The principle is the same for jigs of any size, though, so if you want a larger one just upscale everything here. That's the way master modelers go to make their large scale fuselages and wings.

And yes, there are a few comercially available vacuum forming tables aimed for the modeler. Warmplastic for instance sells a very popular table in several sizes. If you don't have modeling budget constraints, stop reading now and go for it.

The first step is to build a strong box. The purpose of the box is twofold: it creates an empty space which equalizes the pressure under the plastic sheet being formed and provide enough room to attach the vacuum cleaner piping. I built mine from wood and nails, but I heard of people using those plastic items used to make electrical switch boxes. You can also find ready made wooden boxes in craft shops. 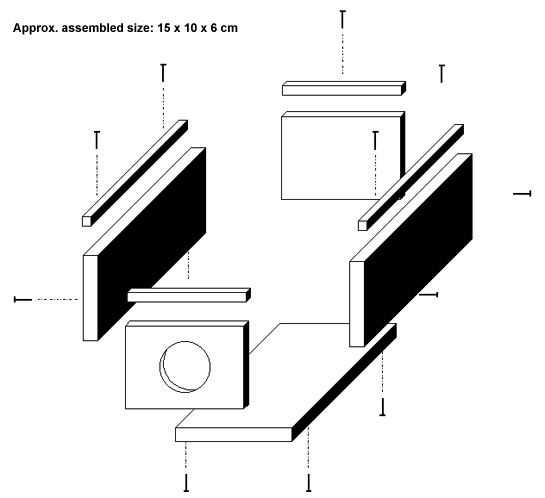 The sketch above gives you an idea of the assembly. I used 1 cm thick wood boards. The final dimensions of this box is approximately 15 x 10 cm and 6 cm high. Note that you have to open a hole in one of the walls to install the connection to the vacuum cleaner. The diameter of this hole is determined by the diameter of your vacuum cleaner hose. Make it slightly oversized. Once finished, I applied a coat of wall filler all around and sanded flush for a better appearance. On the inner side, I brushed a heavy coat of enamel to seal the internal wall joints (sorry, I forgot the FS number...). 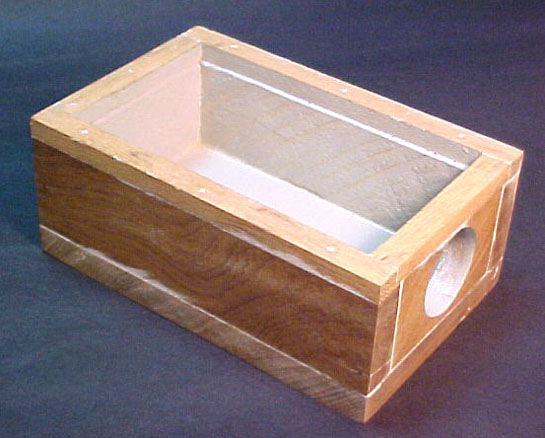 The wooden box puttied, sanded, and painted on the inside.

I decide to build my own box because I wanted a small step along the upper border to provide better support to the mesh that will be installed at the top. I failed to find something like that ready made... 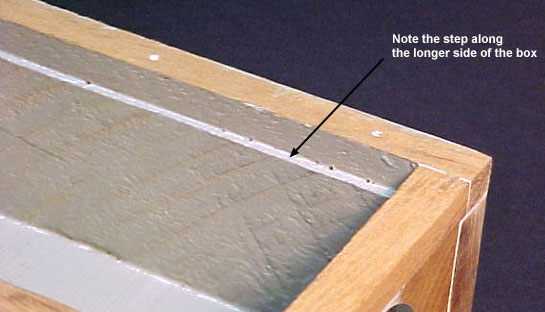 Note the step along the border to provide support to the mesh.

I used a comercial vacuum cleaner accessory to make the hose connection. Because of its conical shape, it is just a matter of pressing it firmly to the perforated wall. The friction will provide a snug assembly. If you can't find a similar item, a piece of PVC piping wil do the job. 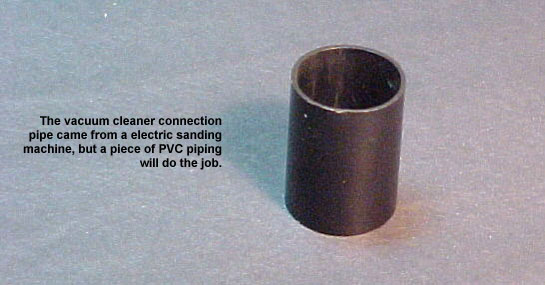 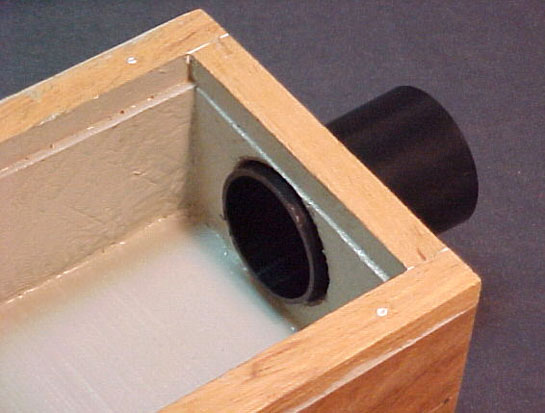 The connection installed in the box.

I started by the simplest grille: a thick acrylic plate with 2 mm holes spaced by 1 cm in both directions. Smaller distances would be better, but the task would be increased by powers of 2! Instead, I decided to install a steel mesh on top of the acrylic plate. Much better: the mesh will distribute the suction evenly all over the area, even if you made just a few holes in the acrylic plate (and now we know why that strange textures on the base of the Falcon canopies...it is the negative form of the mesh).

The perforated plate will rest on that small step left along the upper border of the box, so measure carefully the inner dimensions of the box before cutting. The mesh goes on the top of the plate. Since both (the acrylic plate and the steel mesh) were cut slightly undersized, I built an armature of brass rods soldered in the corners to be used as a clamp atop everything. Try to make the dimensions of the armature as close as possible to the box opening. This will eliminate the need to seal the joints afterwards. 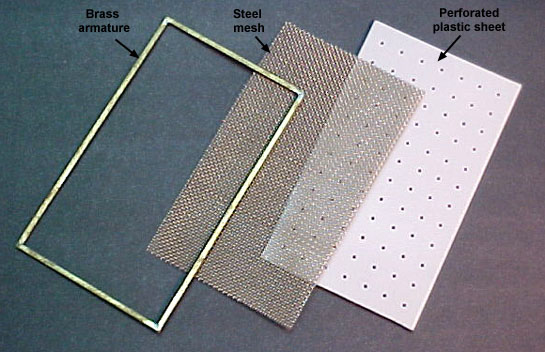 The components of the grille.

Next, I glued the armature/mesh/plate sandwich with epoxy glue. This is not strictly necessary, but now the grille can be handled as a single piece. 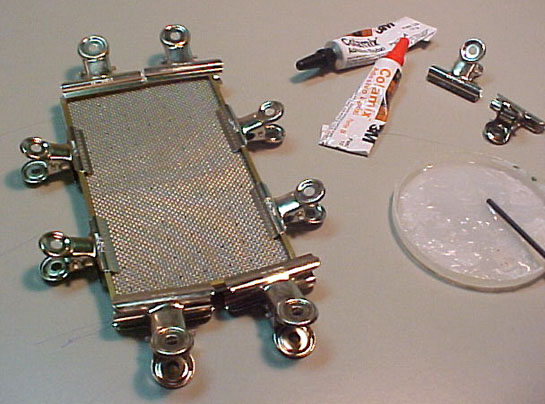 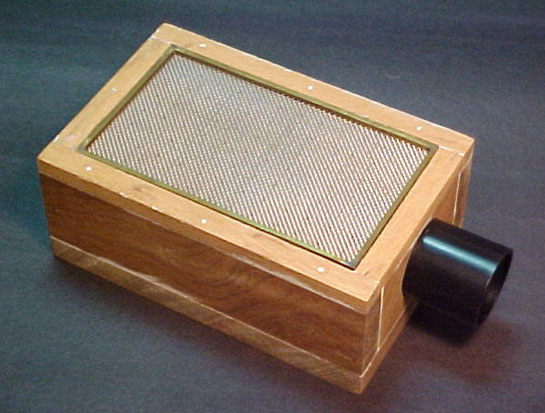 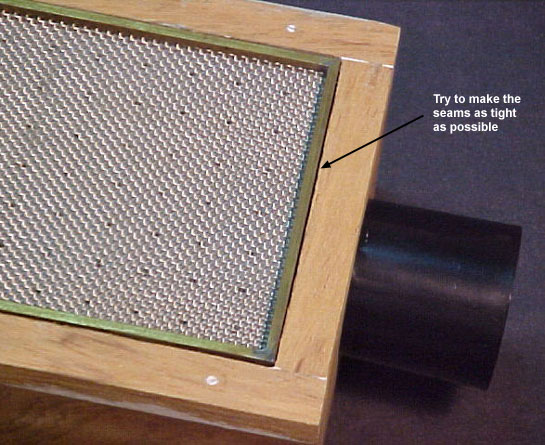 Don't worry if your seams are not tight. You can seal them in the end.

Well, since we have gone this far, what about a bit of aesthetics? I took a wide flat brush and applied a heavy coat of gloss black enamel around the outer surfaces. The jig looks much better now. 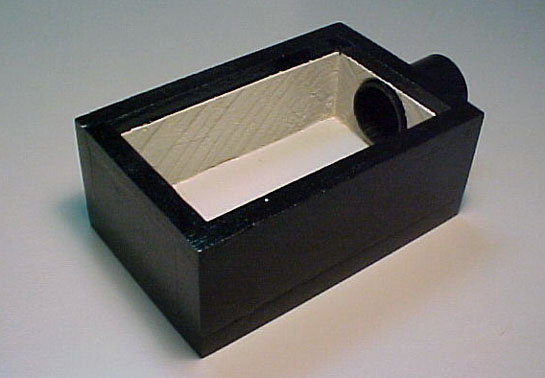 Next, I decided to add some grip to the base of the box (remember, you will probably use that greasy kitchen table). I screwed three rubber shoes to the bottom of the box. I used three of them because three points form a plan. Had I used four, the box would swing slightly and... Ok, ok, I used three because I had only three of those rubber shoes. 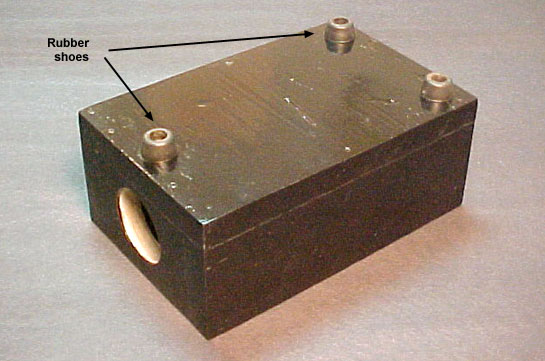 Now the grille can be permanently installed. If it doesn't fit snugly to the box, fill up the ridges with silicon gel, white glue or epoxy glue. 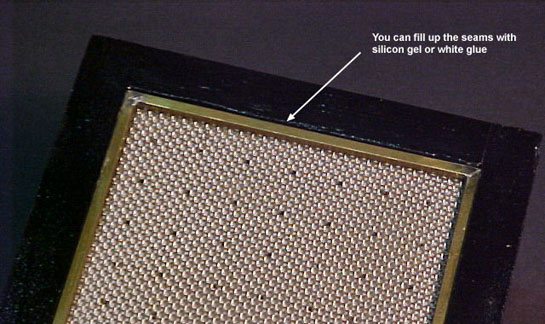 And that's it. The harder part has gone and we are almost there. Take a look: 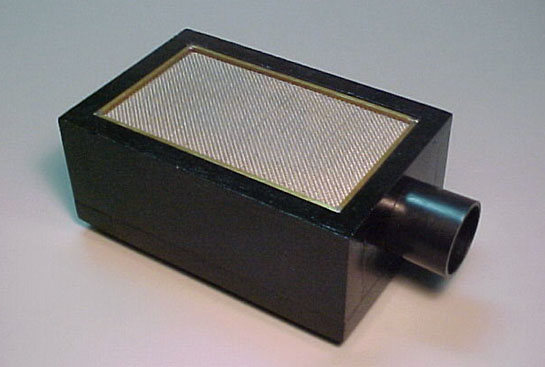 The clamping frame is part of the project. Without it, the box is not of much use. I made mine from 3 mm hard wood boards. It is necessary to make two of these, with the same opening in the center. The plastic sheet to be formed will be sandwiched between them. It is important to use a heat resistant material (remember, the clamping frames, with the sheet in between, will be heated in the oven to soften the plastic sheet). So, my choice of wood possibly was not the best choice for a long term usage. Anyway, it is easier to build than metal. In addition, the wood grain will act as a grip to avoid the plastic sheet slipping between the frames during the forming. I've seen frames made from metal and they generally require bolted joints to hold the plastic sheet properly. After making dozens of parts, I've never faced slipping problems with my wood clamps (so far, at least). On the other hand, repetitive exposure to heat can warp severely frames made from bad quality wood.

The sketch below shows the two sets I made for the box described. The version with the larger opening uses all the working area of the grille, while the one with a smaller opening is used for smaller parts like spinners, landing gear doors, wheels and 1/72 canopies. It saves a lot of styrene... 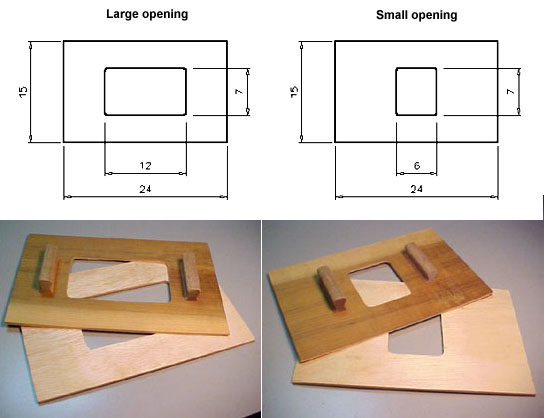 The clamping frames (dimensions in cm).

Because I didn't use any bolted connections in this design, I simply employ office clamps to provide the fixture of the styrene sheet. 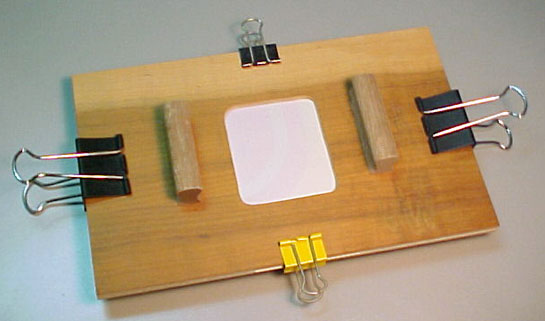 Holding the plastic sheet in the frame.

And finally we have our own vacuum forming table. Take a look: 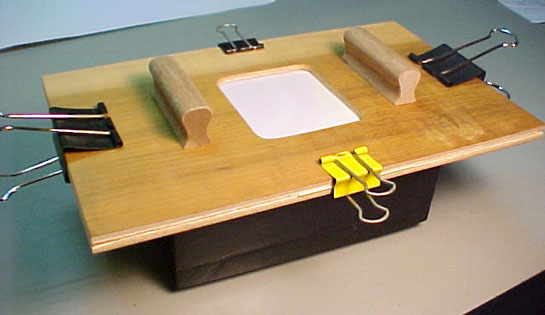 Of course it has its faults. In retrospect, I should use some sort of tabs on the lower clamping frame to make alignment easier. When you remove the frame from the oven, you must move fast to avoid excessive cooling of the sheet.

As I mentioned before, I've been using this device for almost two years. Everytime I failed to produce an acceptable part it was due to incorrect heating of the sheet or misalignment of the clamping frames with the box. My fault in both cases. Another important factor that I discovered by the hard way: it is not your vacuum cleaner which is weak, it is you that didn't remove the dust filter from it (you will be amazed how this simple action increases the power of your old vacuum cleaner).

As a last note, remember that you can also build an adapter to increase the working area of your jig. It is basically another box (equiped with a larger grille) that fits this small one. Of course in this case you will need new clamping frames too.

You may argue that this is a lot of work for something that is comercially available. Well, the money is yours. And besides, this can be a good entertainment for a rainy weekend between two model projects. It is very easy to build (I'm no carpenter) and a must have item for the scratchbuilder. I didn't showed the device in action because another article showing its use is in my to do list, and will follow shortly.

I hope you find this article useful.