Producing Your Own Decals with a Laser Printer

This is a summary of how to make decals at home using a good quality laser printer. Some time ago, a close friend asked me to make some laser decals for his Dornier Do 18. The project was dropped after a while. A couple of months ago, another modeler asked the same in order to built his 1/72 Nieuports 11 flown by the well known aces Navarre and Barraca. Since I had then recently acquired a laser printer at the office, I decided to give it a go. Although the examples shown in this article are for 1/72 subjects, the method remains the same for larger scales.

Step 1: Do Your Homework

Any serious modeling task starts with a good research. Making decals is no exception. After checking a number of references, we ended up with the profiles from Osprey's Aircraft of the Aces #33 - Nieuport Aces of WWI. In order to avoid relying on a single reference, these profiles were checked against other books and photos of the period. So, here are the planes we are interested in: 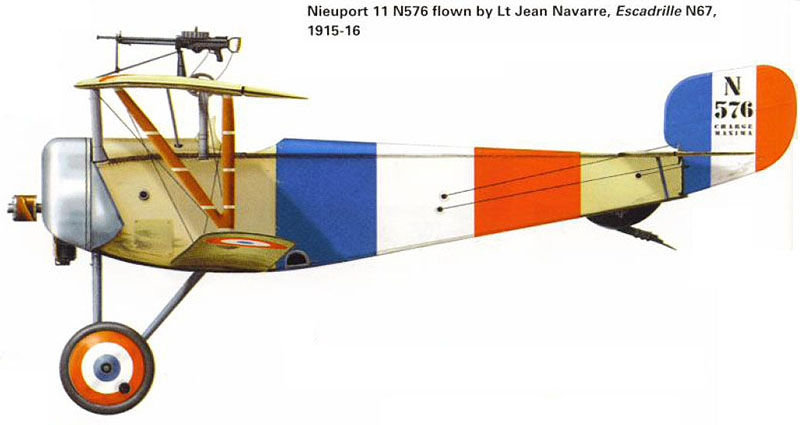 My friend had the common markings, so he was interested in the tail markings and personal artworks. Therefore, Barraca's plane would need the tail markings as well as the famous Cavalino Rampante (which brings some relation to the Ferrari's logo, but that's another story), while Navarre's plane needed just the tail markings. Being all black, these markings make a good test bed for home-made decal testings.

Now let's start by revisiting a simple sequence to reproduce artwork often seen in combat aircraft. The recipe works well for single color artworks, only, but that's a start. We will show how we did to reproduce Barraca's pony. Note that the best images will be created by using a vector-based software such as CAD programs or Adobe's Illustrator or other graphics programs. By working in higher resolutions with bit-based software such as Photoshop (as used in this example), or other good image editing software, you can also get good results. In a nutshell a vector-based software is most effective if you end up printing in different scales, or have to significantly enlarge the image as vector-based programs effectively tell the printer, 'draw a line from here to here,' while a bit-based software creates the image from a map of square bits such that if you enlarge the image, simply get larger squares.

Using the profiles above, we copied an enlarged piece of the image containing the pony. The image was transformed to grayscale mode, removing all colors. Next, the grays were almost completely eliminated by increasing the brightness and the contrast of the image: 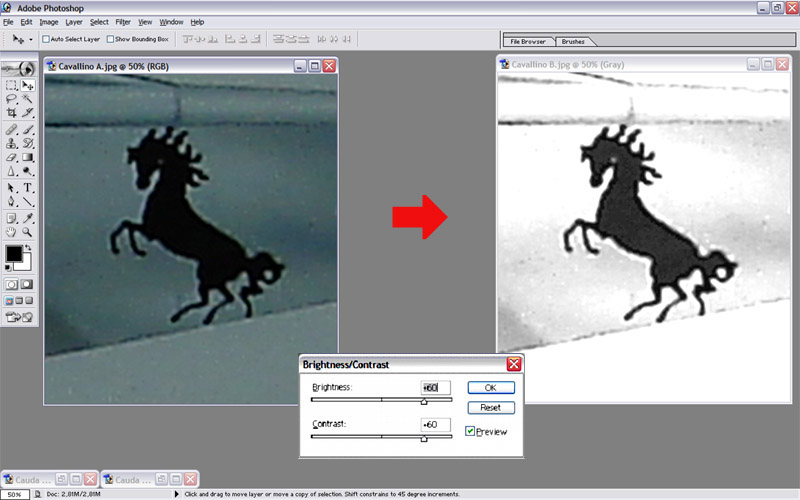 Now we have the pony highlighted in black. In order to make it stand even more, we adjust the channel curves for the gray colors, as shown below: 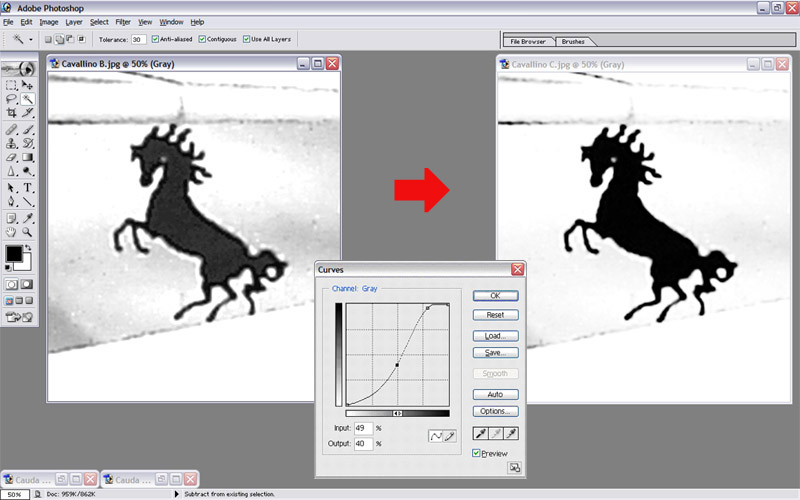 The pony now can be easily selected with magic pen tools (or similar), to select areas withing the same color range. 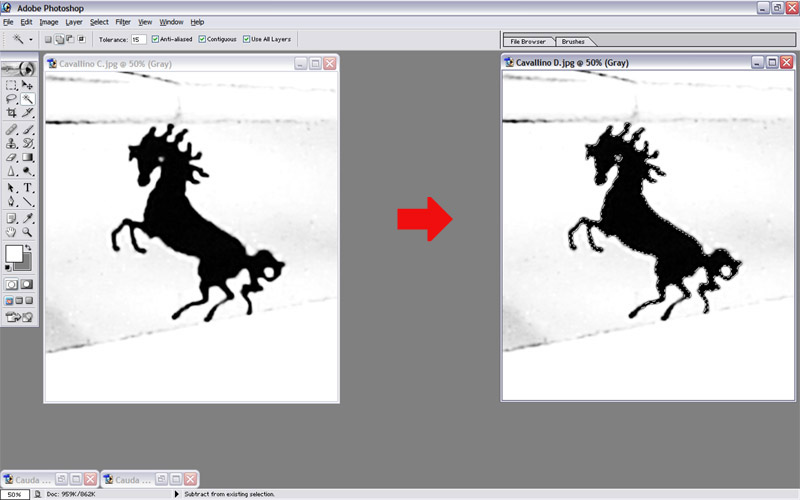 The image selected now is slightly thinner than the original, but most softwares have a grow tool to make it a bit fatter. A couple of retouches later, this is the result we got: 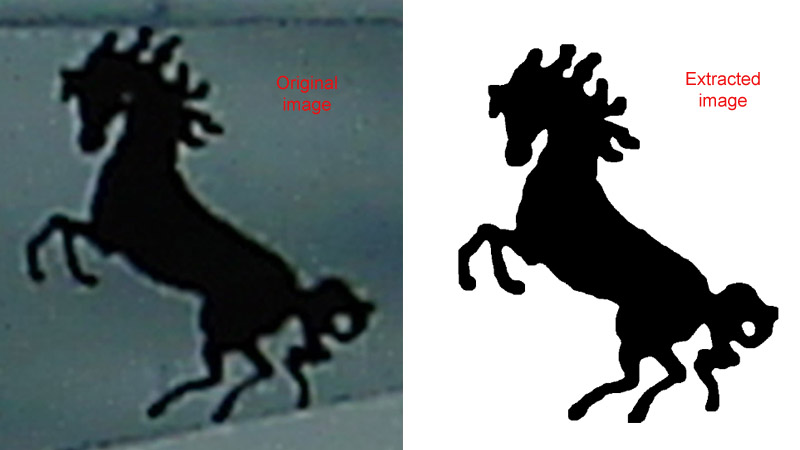 Now save the image in a file to use later.

This is the easy one. All you need is the correct stencil font. Over the years I've been collecting a number of them, and I got a bit of everything: Amarillo (USAF), Luftwaffe, RAF, RCAF and also a number of stencil fonts, mostly derived from the Barrel or Stencil font types. You can find many variations of them through the internet. In our example, the Barrel reproduced fairly well the lettering style of the Nieuport tail markings. I typed the required text in a word processor and copied each group of words of the same size in a separated bitmap (I'll adjust the size in step 4). 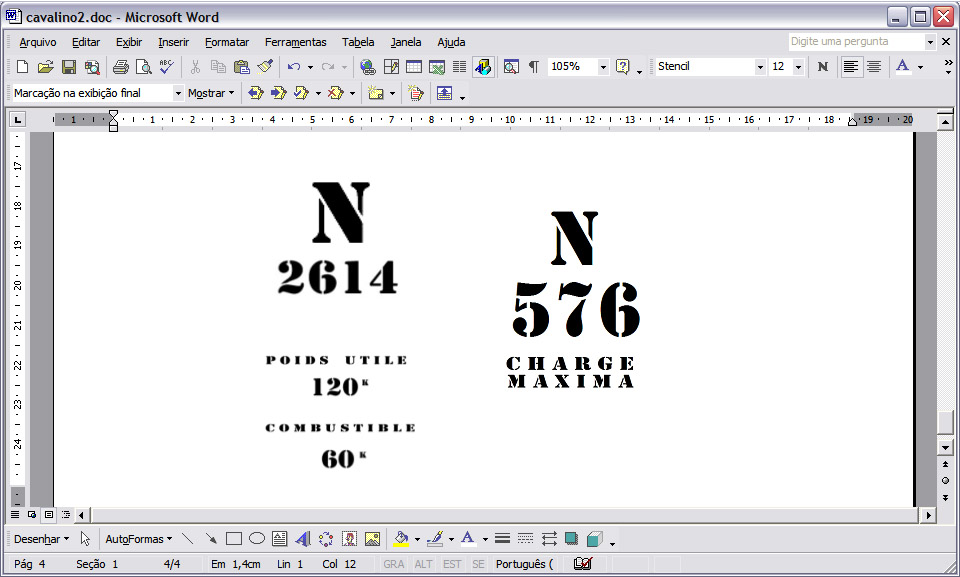 Next, using the profile of the aircraft as a background, I copied each image (stencils and artwork) on the profile and adjusted their size. It is important to lock the aspect ratio of the images in the case of artworks, but for the stencils it may be very useful to adjust the height and width separately to fit the dimensions of the original image. The images produced in steps 2 and 3 were then laid over the profiles and adjusted accordingly. Here are the profiles with the new images (highlighted areas) overlaid: 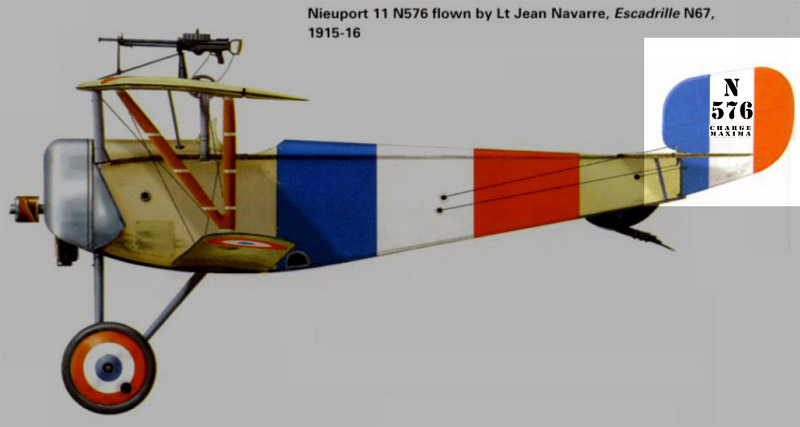 So far, the actual size of the decals were not taken into account. This is easily done. First, group all the images (including the profiles) in a single image. Then, knowing a reference dimension of the aircraft, reduce the size of the grouped image to match the size of the kit. For instance, the Nieuport had a length of 5640 mm. So, in 1/72 scale it should have approximately 78.5 mm. The grouped image was then reduced so that a printed version would have that length. We are done here.

Next, you can ungroup the image and delete the background profile. All that is left are the final artwork to be printed as decals. Rearrange them - without changing the dimensions - to avoid wasting clear decal sheet. Now all images are in the correct size, in absolute and relative terms. Here is mine (not to scale):

This is the graphics to be printed.

Well, I guess all of you already have printed a document using a computer. This is about the same thing. To create the best decals you need a good laser printer. By good I mean sufficient resolution, or dpi (dots per inch). Cheaper types deliver 600 dpi, and that may be more than enough for most large decals. However, for tiny stencils and detailed artwork, I recommend the use of a 1200 dpi printer. I've used a HP Deskjet 1022 (1200 dpi). Here is the sequence: Print the final graphics in a plain white paper to check for any problems and correctness (a). Don't throw it away. Measure the surrounding box required to cover the whole graphics (leaving some safety margins around the graphics). 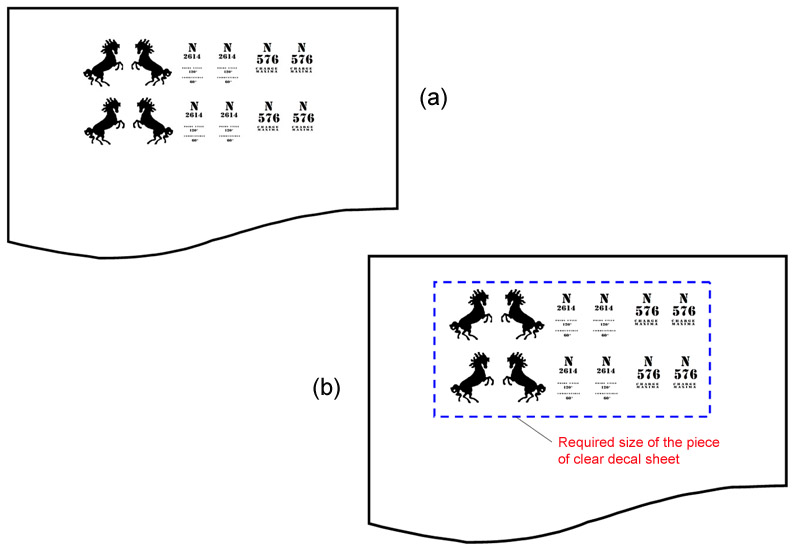 Now cut a piece of clear decal roughly with the same size of that box (yes, I'm a cheap guy). Fix the clear decal over the area to be printed using a good quality tape. Avoid those gummy, sticky types - they may leave glue residue on your printer's cylinder. Now insert the paper sheet in the printer's tray as if you would print the image over the previous one, and on the same side of the paper. The printer will produce the image precisely on the piece of decal. 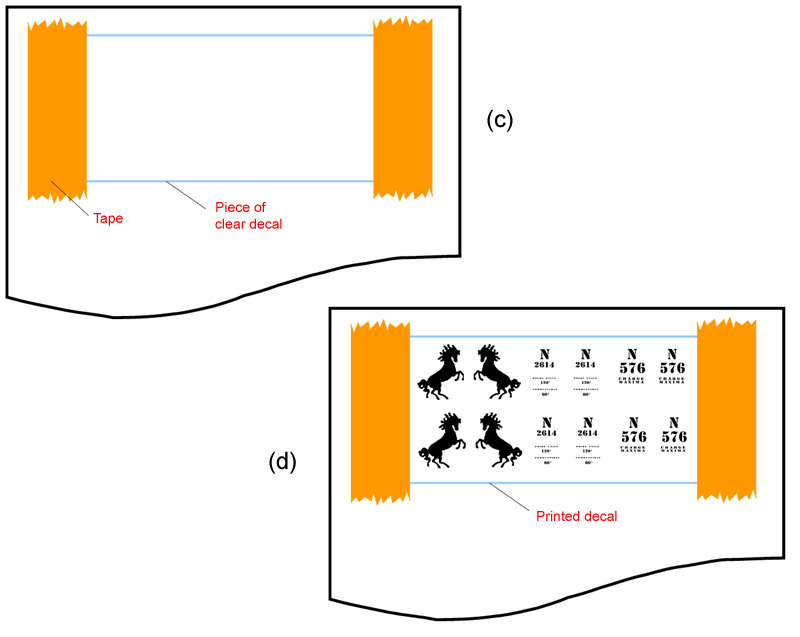 Remove the tape carefully and... voilá, we have a decal sheet.

And so we printed a tiny decal sheet. Fortunately, my friend has taken some pictures of the sheet before using it (because I haven't... doh!). He reported that in contact with the water, the printer toner chipped on a few spots. I haven't found this problem on my experiments, but he solved the issue by brushing a coat of Microscale Liquid Decal Film over the sheet. Different manufacturer's decal paper may work better on some printers than others. After trying three different papers on our new machine I found two worked well but the toner did not adhere well to the third. In this case, the decal film maybe a good solution. Here's the result: 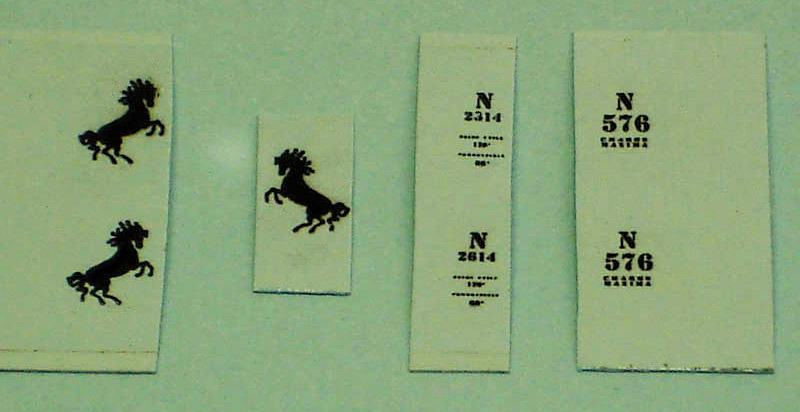 The application follows the same rules of any regular decal, just remember that this is a continuous decal film, and therefore you have to cut each marking before using it. My friend has successfully used these decals on his models. Take a look (remember, this is 1/72): 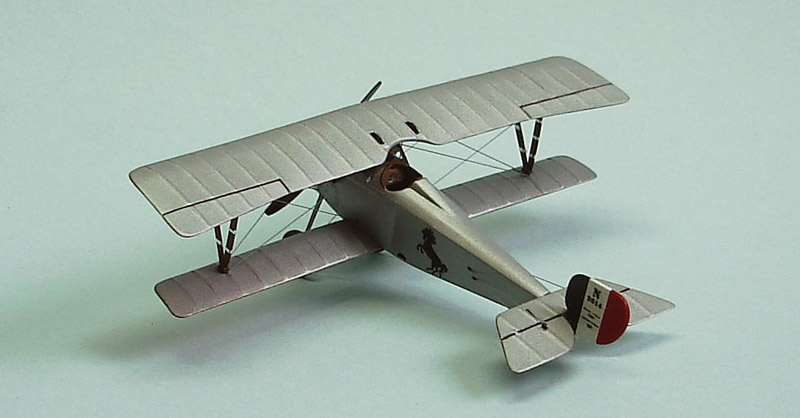 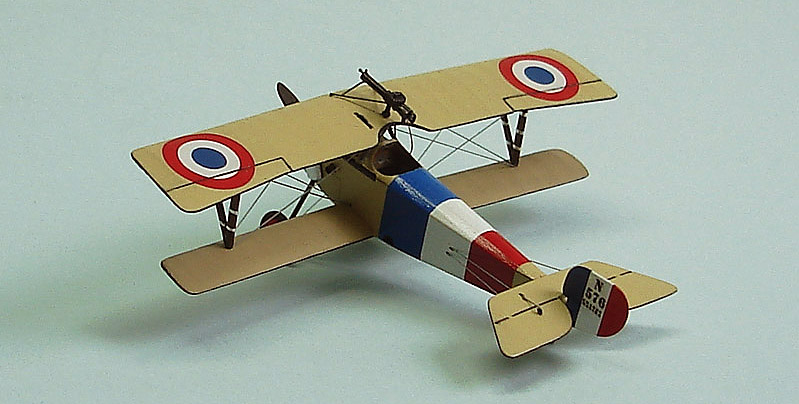 Folks, this is not the only way to produce decals. I know some nuts who are silk-screening decals... But if you are going to print them, the recipe described here will work with minor adjustments. A few additional comments, though.

I've been reading about producing decals by photocopying B&W originals. I tried it a while ago with a brand new machine for a 1/32 project. The image below is an enlarged photo of the actual decal produced with that method. Although the stencils would be acceptable for a well worn aircraft, it is very difficult to achieve a crisp result. Note that even straight lines become visibly irregular. 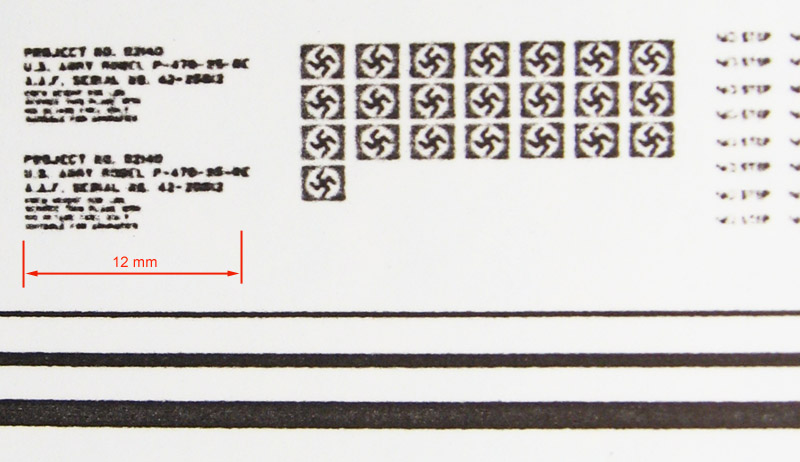 By now, you all already have heard about using ink jet printers, special ink jet clear decal film, and this and that. My advice is: don't waste your time. Although ink jet printers can produce decals, and with the later higher quality printers they are comparable with what you get with a good laser printer, all inkjets require some absorption of the ink. Decal papers with this quality are much thicker than laser decal paper. Also, even with the recent water-resistant inks out there, you still need to spray a seal coat on the decals so they can survive the decaling process. This makes the decals even that much thicker. I had a moderate success with the Epson C63/C65 ink jet series, which uses water resistant ink (Durabrite© or similar), also the Epson R2400 which uses K3 inks can work.

Whatever is your need, I think these home-made decals open a great opportunity to have models sporting unique markings in your collection. And besides, many times it is your only choice for a particular subject, like this collection in 1/72 testify: 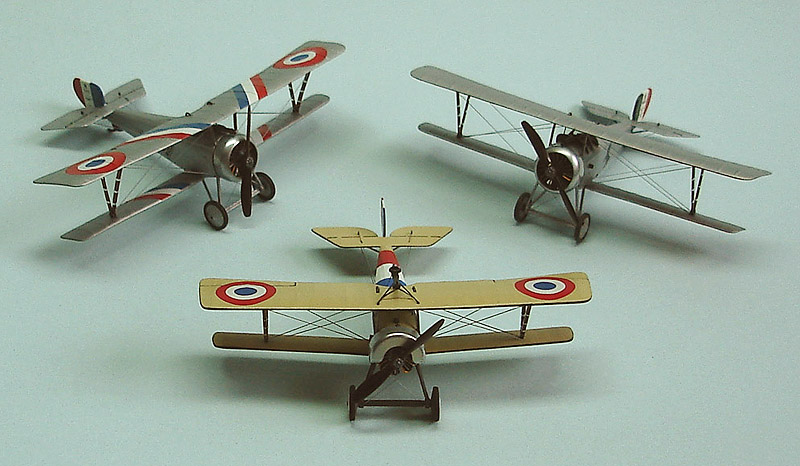