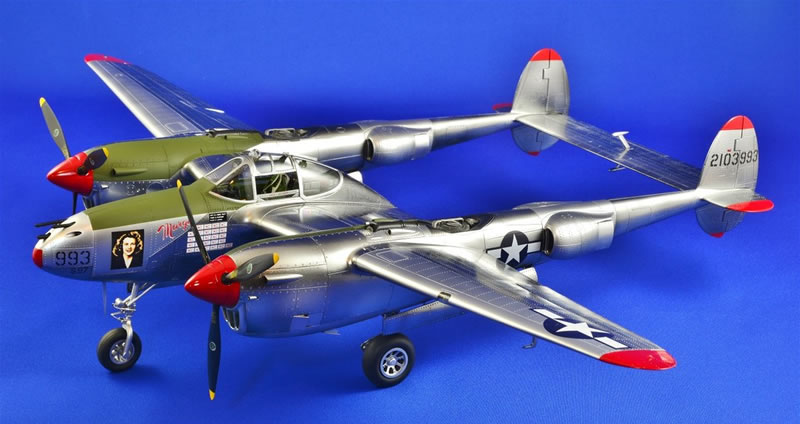 After 14 months and hundreds of hours, this replica of “Marge” is finally finished. For information on how I assembled this project, I have a build thread in the forums:

I have always wanted to build the iconic twin boom “Fork Tailed Devil” P-38 Lightning fighter of WWII. I prefer the larger 1/32 scale for all my builds and there are currently only two choices of this aircraft at this scale from both Revell and Trumpeter. I heard that the 2011 Trumpeter kit was better than the much older Revell offering, but having recently built the 2001 release of the Trumpeter A-10A kit in 1/32 scale, I was very apprehensive to use this kit due to the many difficulties encountered in that project. Thankfully, I found that Trumpeter has come a long way in improving their products during these 10 years, but this kit still has a number of big challenges to overcome if you want the model to look both well-constructed and fairly accurate.

The other thing I have always wanted to try is to build a “restored bird” with a clean Bare Metal Finish (BMF). My aircraft builds are usually fairly weathered, to replicate how they looked in the field or runway during a war or heavy use. Besides making the aircraft look more realistic, weathering can also hide small flaws in the paint finish or construction. A BMF hides nothing! As a matter of fact, on a very smooth and shiny metallic surface, every tiny flaw will be magnified, so extra care must be given to both the model construction and the painting to eliminate as many flaws as possible.

The subject for this build brings the two wishes together in Major Richard Bong’s “Marge”, as it appears at the EAA AirVenture Museum in Oshkosh Wisconsin. Major Bong was a member of the Army Air Forces in World War II, a Medal of Honor recipient and was referred to as the “Ace of Aces”, having shot down at least 40 confirmed Japanese aircraft, all while flying a Lockheed Lightning P-38J fighter. This P-38 is actually Serial # 44-53087, which is a later P-38L, although it has the markings of one of the P38J’s that Major Bong flew during the war, Serial # 42-103993, which has 25 of his kills recognized. At the nearby Richard Bong Veterans Historical Center in Superior Wisconsin, there is another P-38L, Serial # 44-53236, which has the same markings as #42-10993, but the entire fuselage is painted aluminum which I find much less interesting to look at – or model. The nose art on both of these aircraft has the image of Major Bong’s girlfriend at the time and later wife, Marjorie Vattendahl, hence the name “Marge” beside her image.

I like to use a lot of aftermarket products in my builds to improve the quality of the finished model and this build was no exception. Besides the Trumpeter P-38L kit (#02227), I used the following products to “kick it up a notch”: 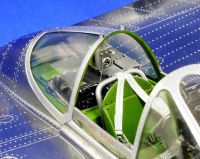 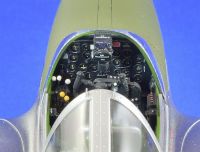