Nothing too fancy here really , just a standard Roden boxing of the iconic and venerable Fokker Dr.I WWI German Triplane. I decided to do 'er up as a machine from Jasta Boelke, Dr.I number 214/17, as it appeared in 1918, pilot Wilhelm Papenmeyer.

A few extra goodies were thrown into the pot, those items being the Part P.E. set, Vector resin Le Rhone Oberursel engine, Master Spandaus and some Pheon decals, with unique markings to be just painted on. Albatros Jagdstaffeln book, and many other Dr.I references used to assist with details. 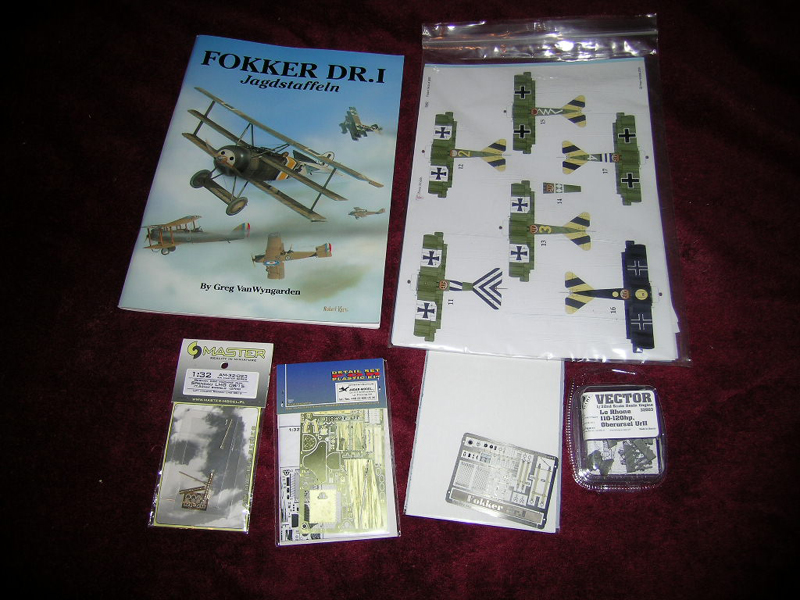 This particular pilot (Papenmeyer) grabbed a propeller from a Nieuport to use on his mount, so I was graciously gifted with a correct prop from Rowan Broadbent (Pheon Decals), and I duly painted in a dark shade typically seen on Nieuport props. 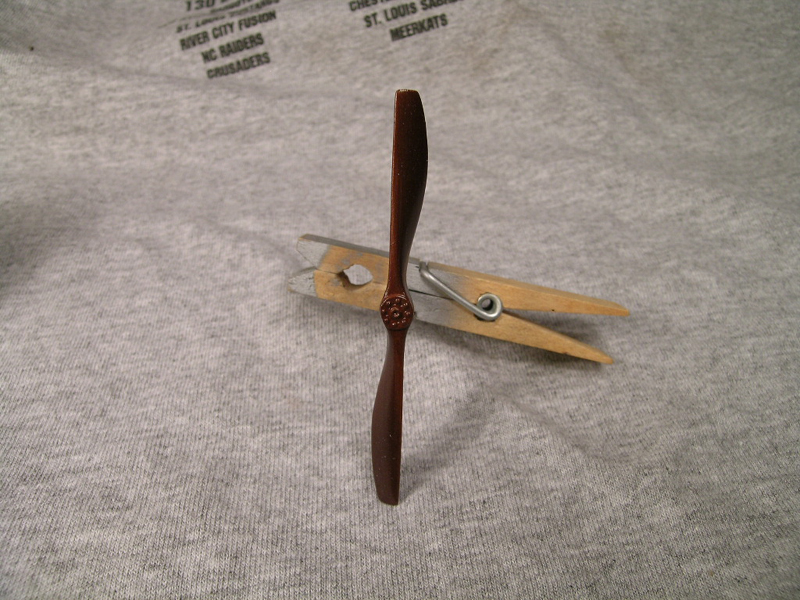 I decided to fake up the Fokker nuts adjacent to the pit area. They may be just a wee too large, but acceptable, at least to me. 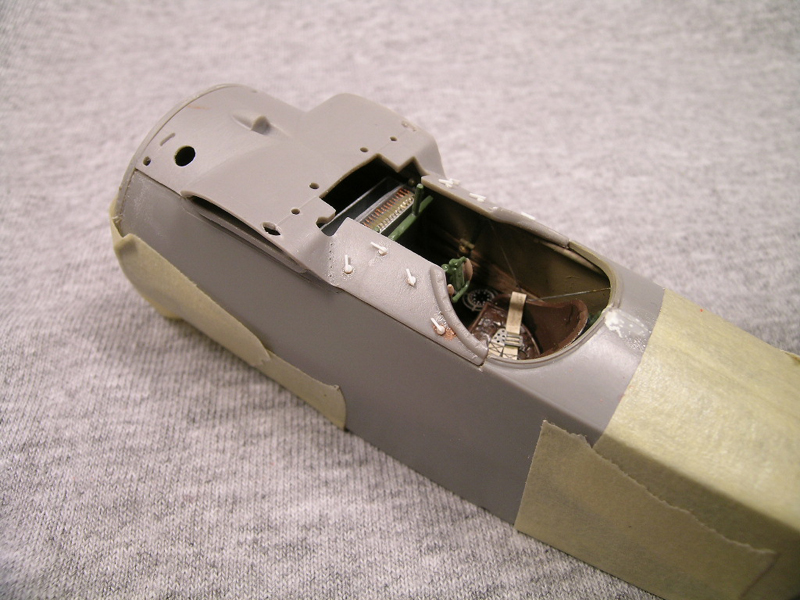 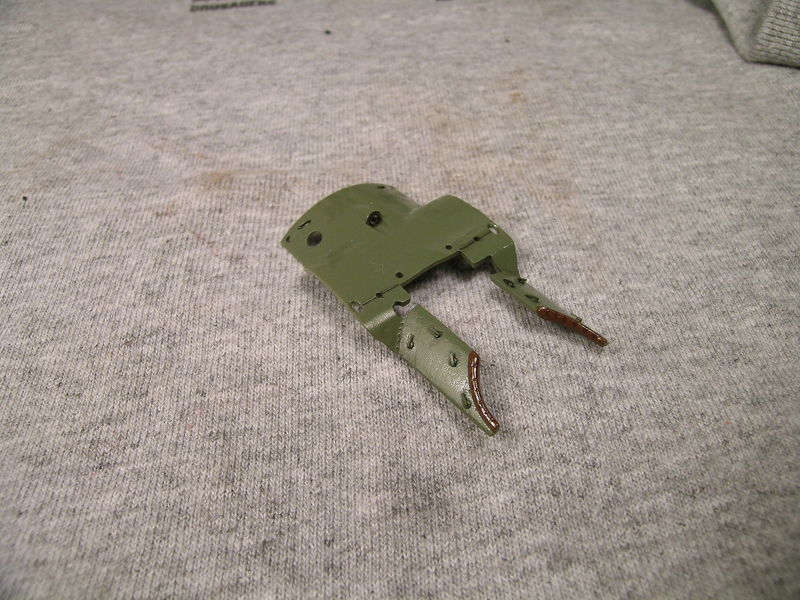 Axle wing has been reworked here, with access panels added. 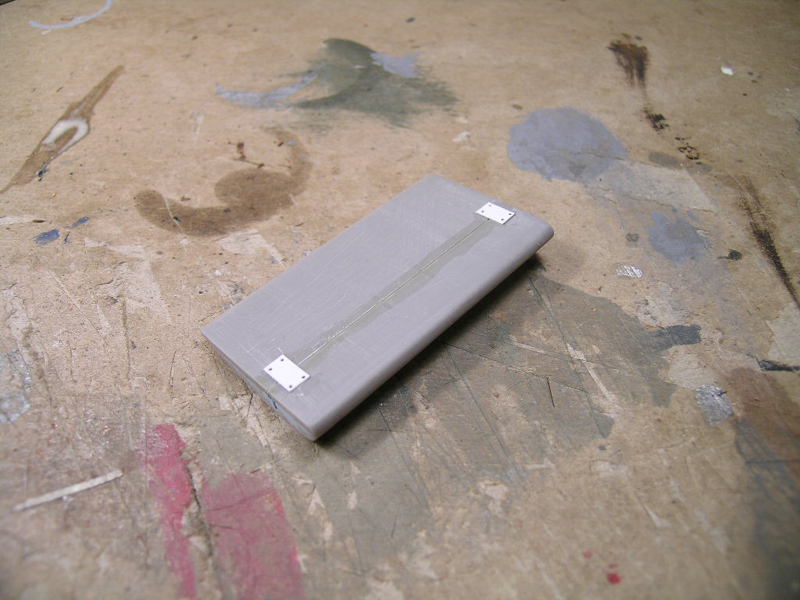 These Master Spandau barrels are just splendid, miniature art at its best. 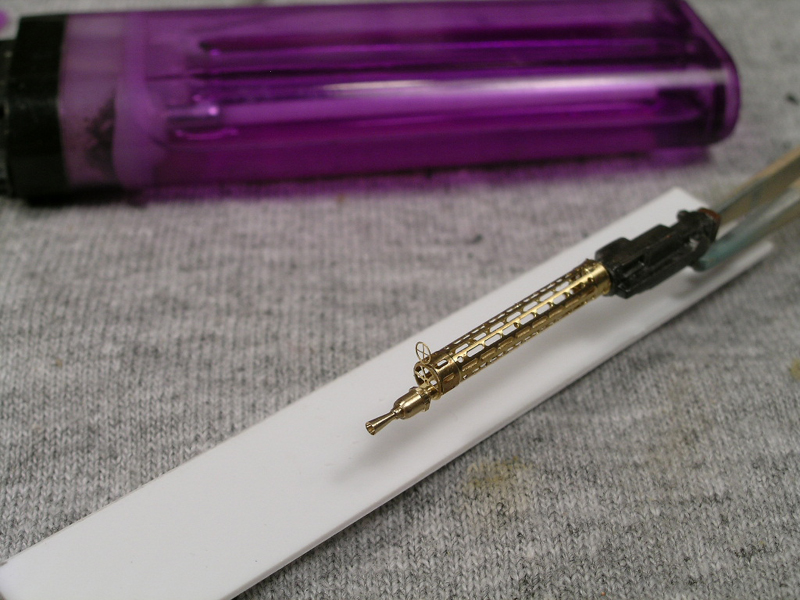 A somewhat traditional method of dealing with the guns seems to be to paint them flat black, but I chose MM Titanium instead, as it was faster and still gives a decent impression of blued steel (at least to me eyes). 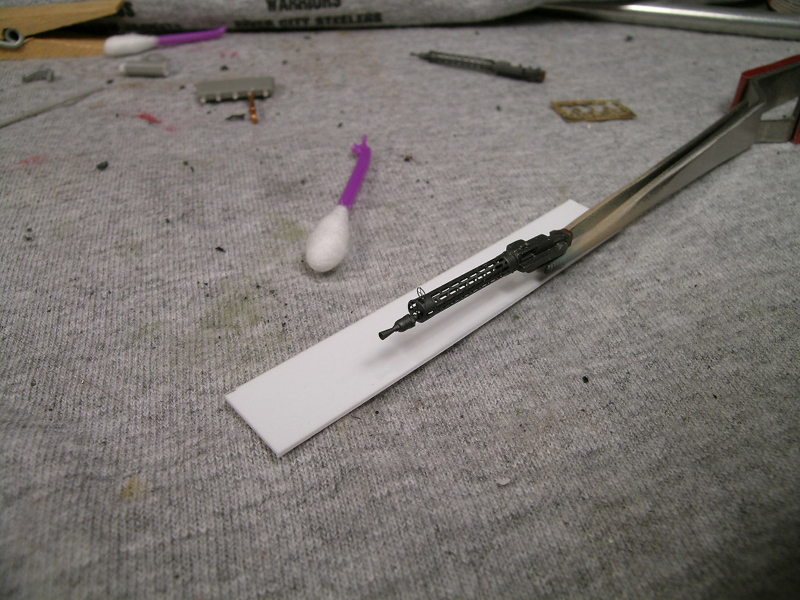 Second ammo/belt box went missing, so I fabricated a new one. (Once these were painted, first box magically reappeared!) PE ammo belt has been added to one box and painted, placards also added. 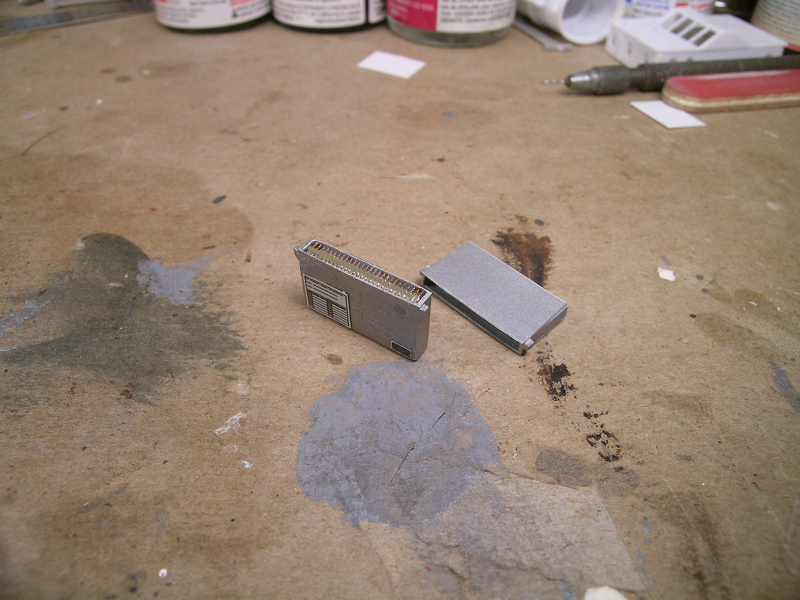 Depressions in fuselage rear and horizontal stab opened up for elevator and rudder cabling, with P.E. opening reinforcements added. 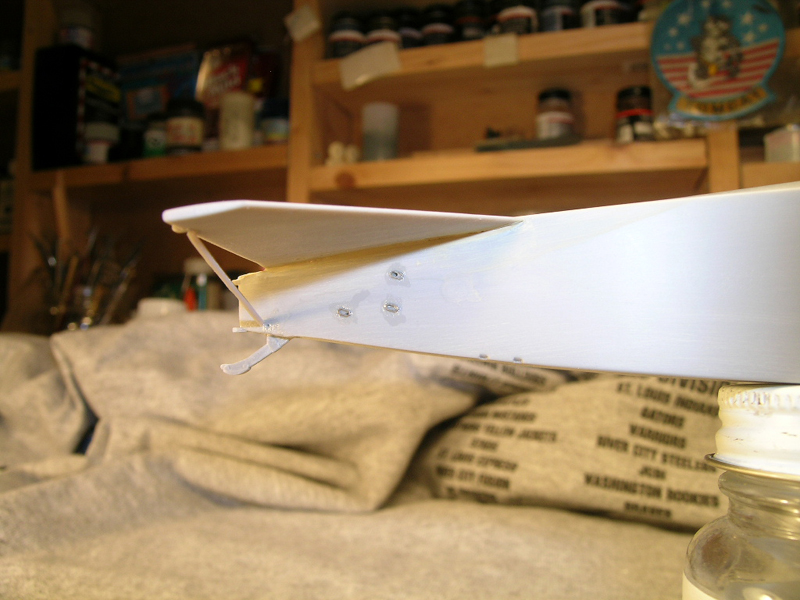 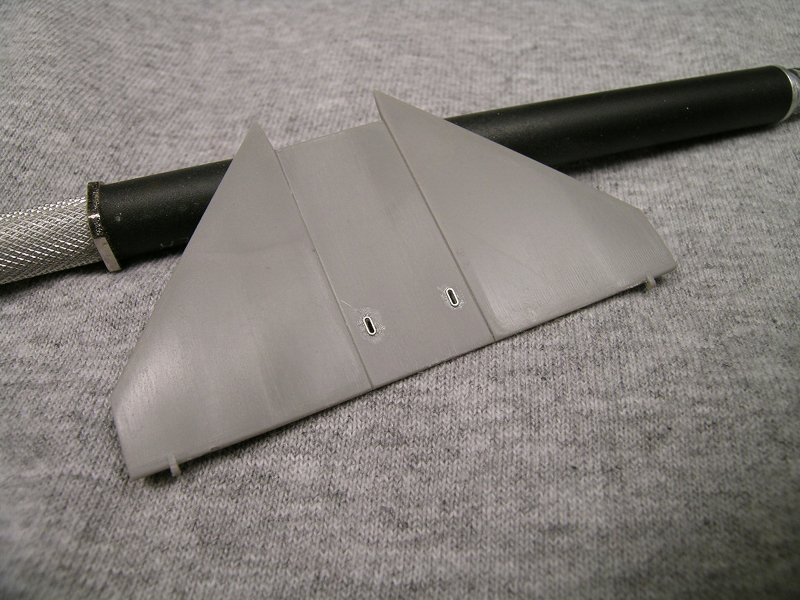 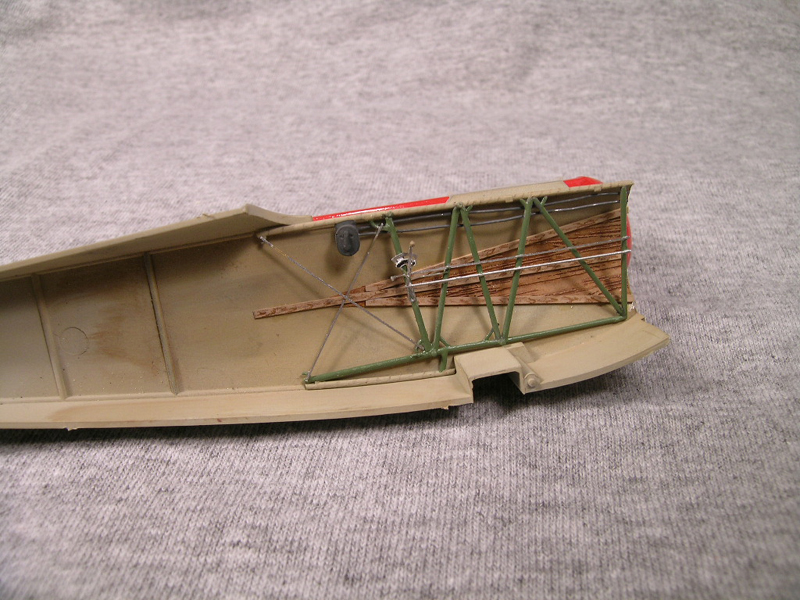 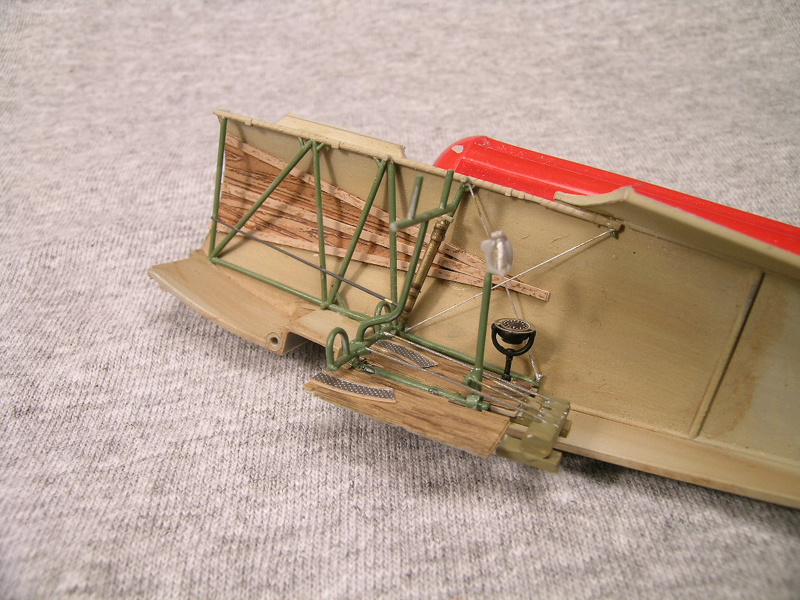 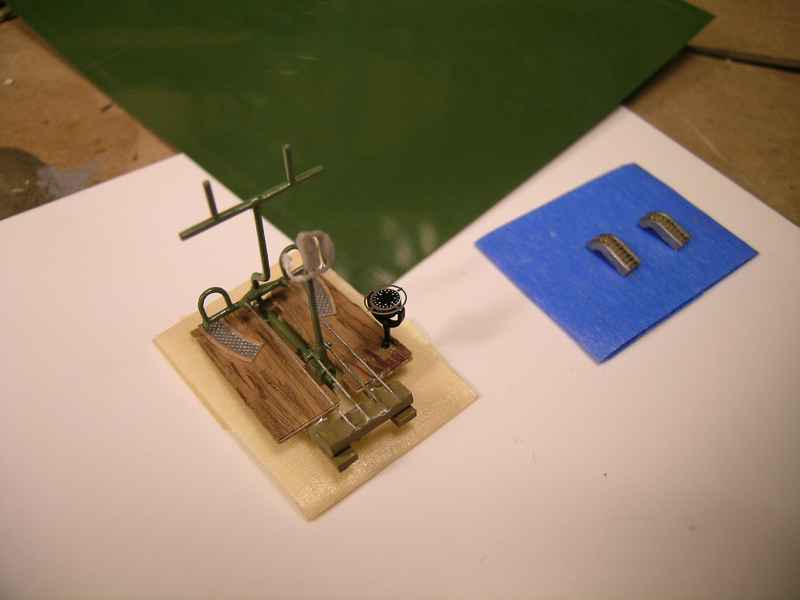 Canvas divider behind pilot's seat was replaced with a new panel, made from card and half-round rod, with P.E. canvas added. 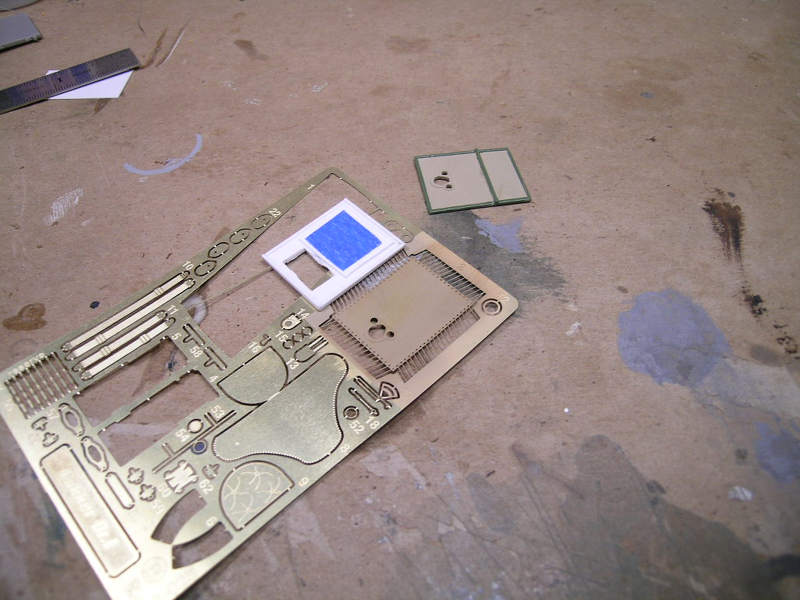 With seat cushion fashioned from Fimo sculpting putty, all painted up & belts from P.E. set added, pilots seat is here firmly anchored to bulkhead. Seat supports were too narrow (or I installed them incorrectly), and would have had to be splayed out, so I just faked it. 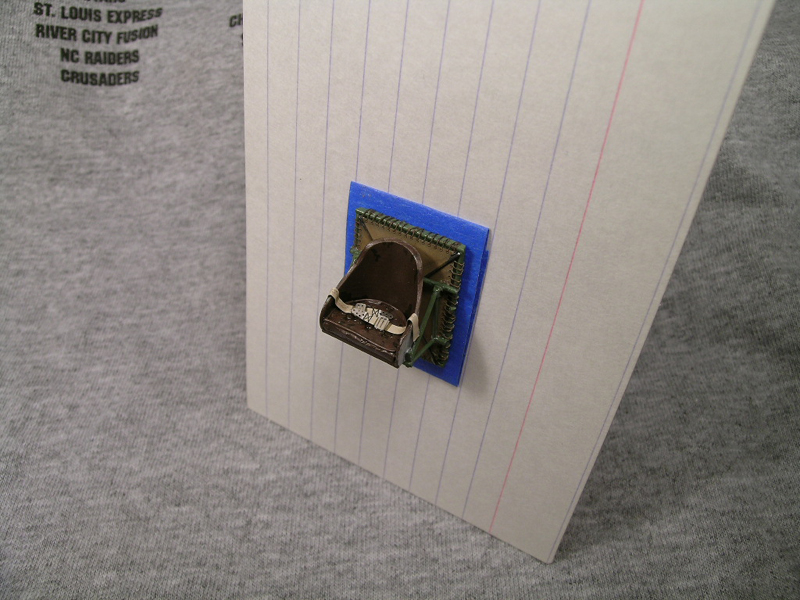 Delicate Part P.E. stitching added, this was somewhat nerve wracking, as I was terrified it would pull off with masking tape during the painting process, but it worked out OK. 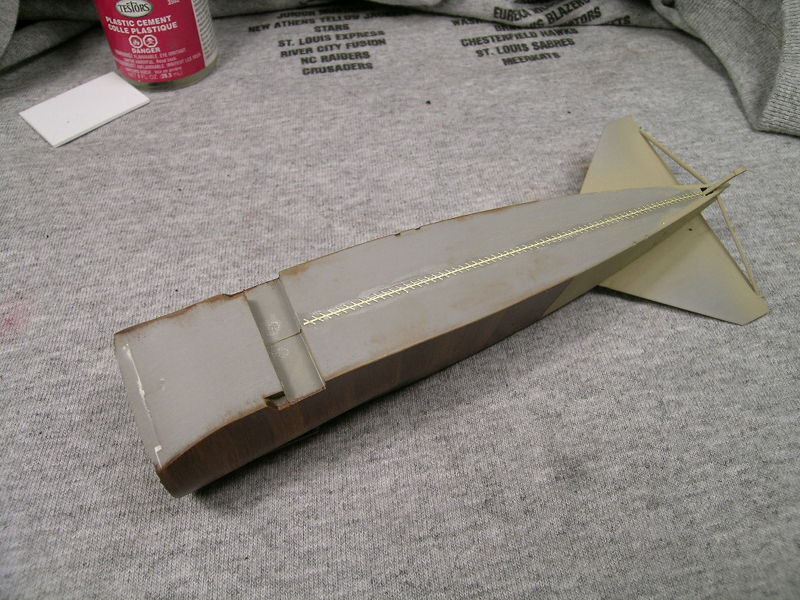 Initially, I had decided to go with the Part P.E. cowl ring. 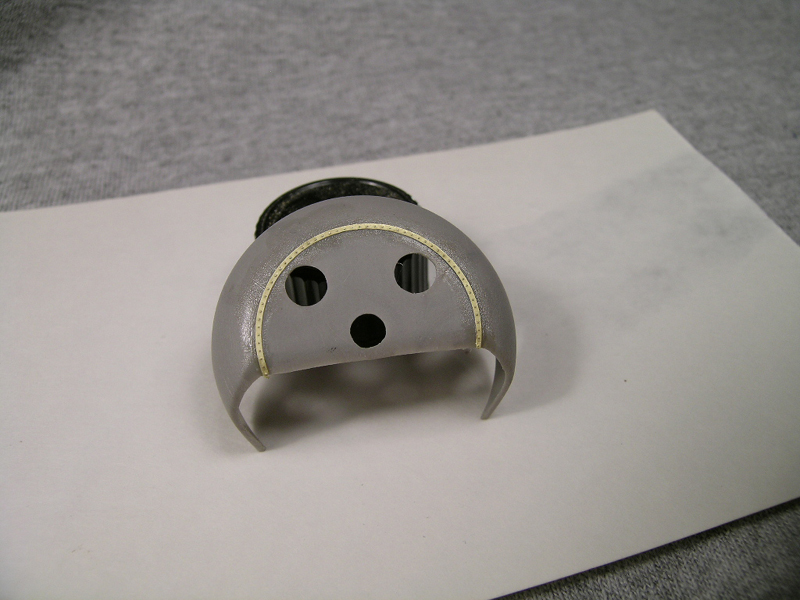 I later determined to scrape that ring off and just re-scribe and simulate the screws that hold the center piece in place. 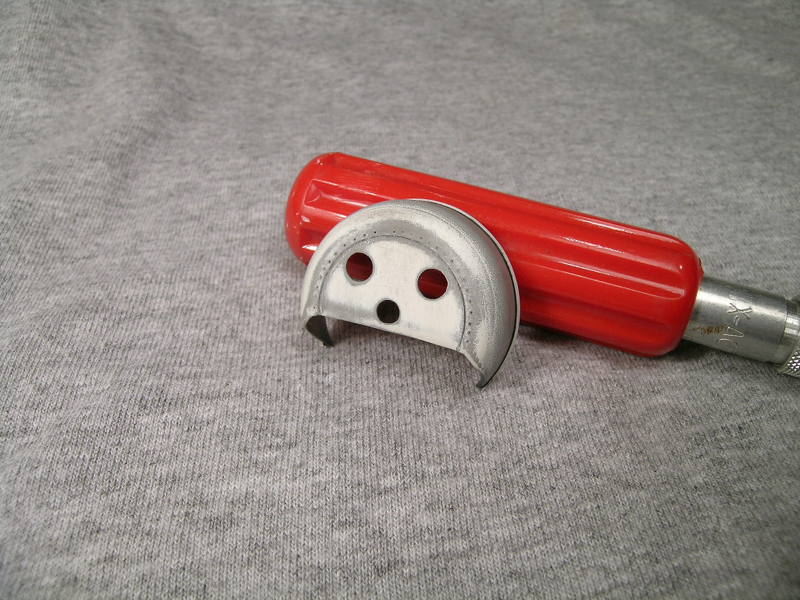 Cowl has here been painted and crudded up a wee bit, .030 half round, and .015 round added to rear of cowl to represent rolled flange and elastic cord for attaching cowl to fuselage. A solidifying wash should make it look lots better. 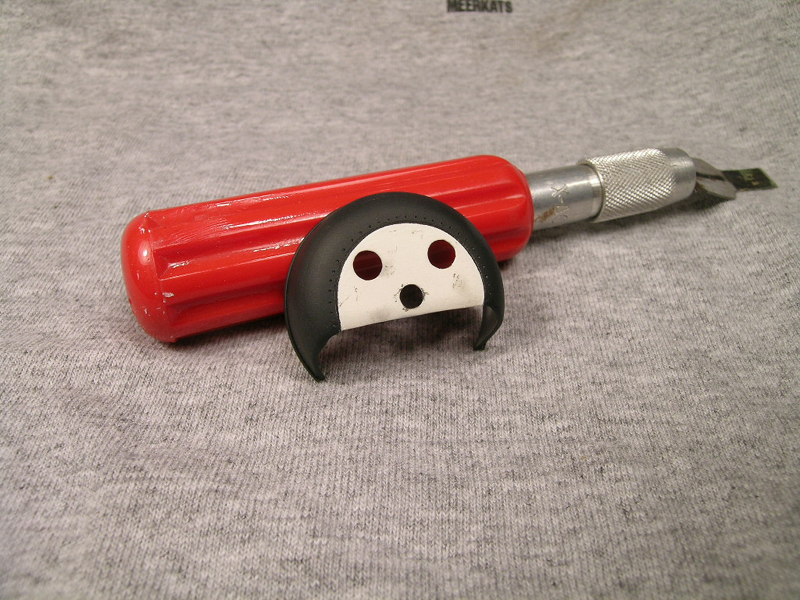 Vector engine was then assembled and test fitted to cowl as an assembly. As is typical it seems, rocker arms had to be ground off of most cylinders to fit within cowl, leaving just three showing. Push rods and spark plug wires were then added only to those cylinders that will actually be seen once cowl is attached. If I can't see it, I don't do it. Engine was then given a light wash of brownish color to simulate burned on Castor oil. 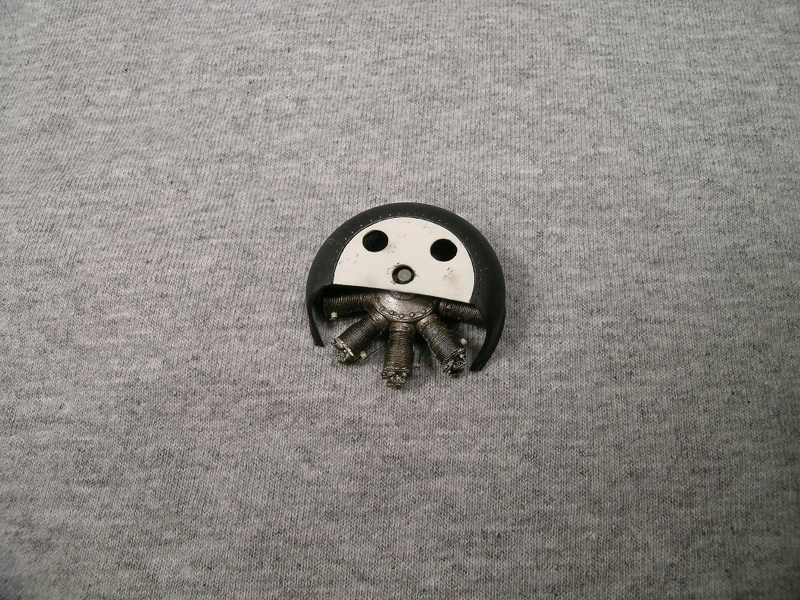 Wheels, once painted, stained and splattered with mud, look OK I think. 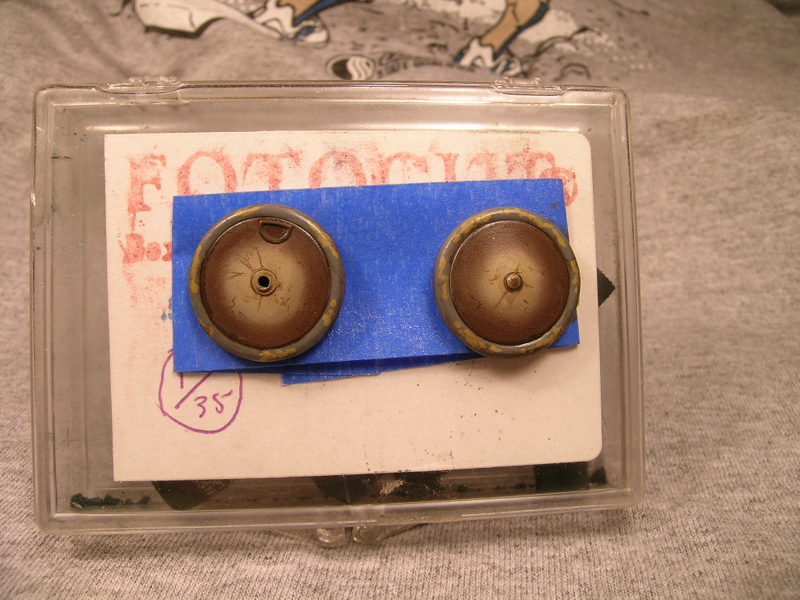 There's a bit of conflict amongst the WWI aviation modeling community regarding proper colors for the Dr.I, brown vs olive, with hundreds of illustrations over the years depicting either. On this particular example, I decided to go with brown, but my next Dr.I will be olive based.

Burnt umber and Liquin, were used to approximate the Fokker streaky finished surfaces as best I could, with lower surfaces painted a Model Master blue. To enable a better likelihood of streaks flowing at a uniform angle, wings were taped to a piece of ruled paper at an angle. 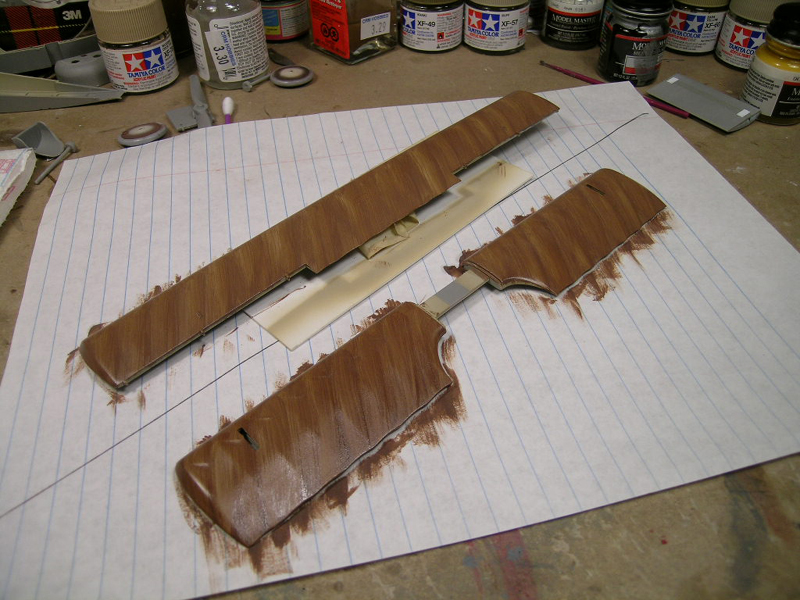 Fuselage with streaking and fuselage colors now masked and painted. 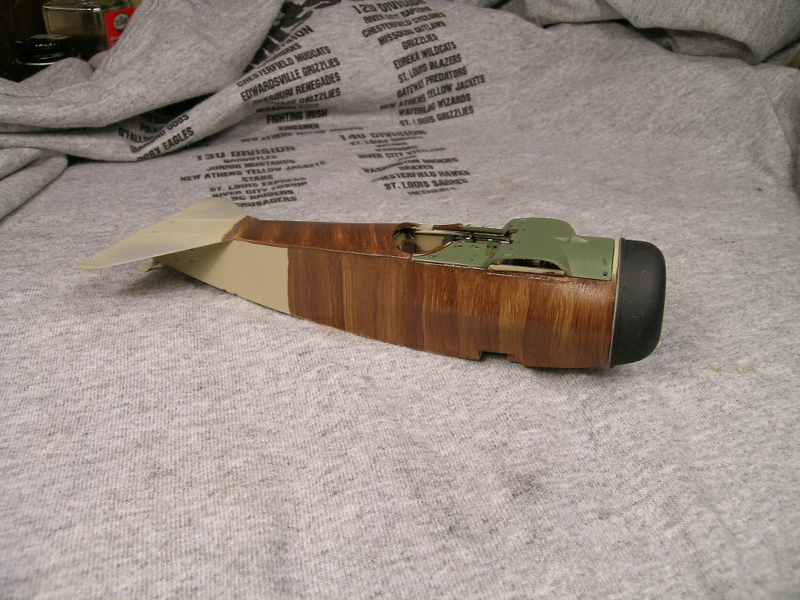 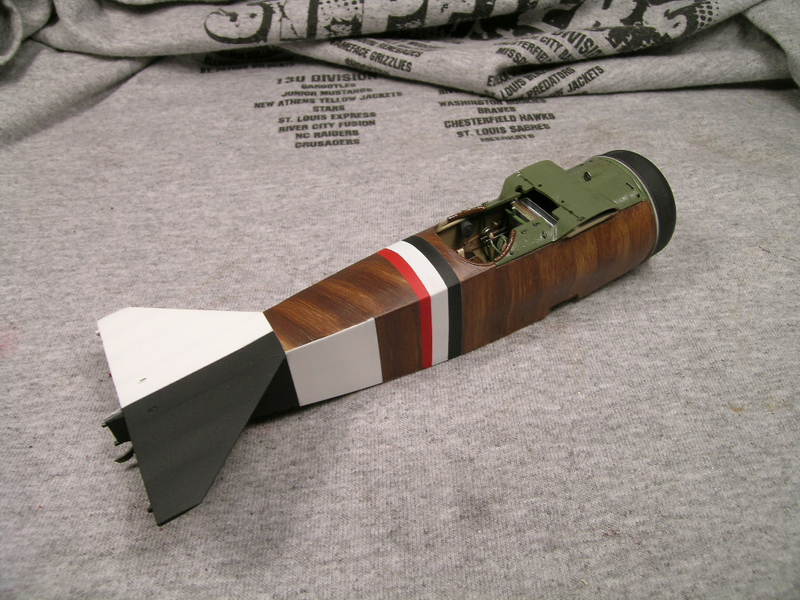 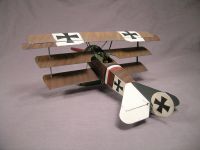 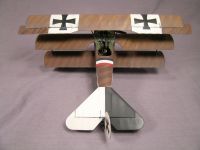 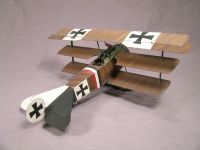 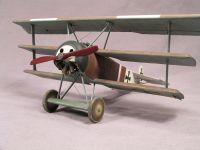 On the contest table (I barely finished this model in time, which seems all too typical for me.) Somewhere along the line, starboard wingtip skid went missing, never to be seen again. Model was subsequently sold to a collector. 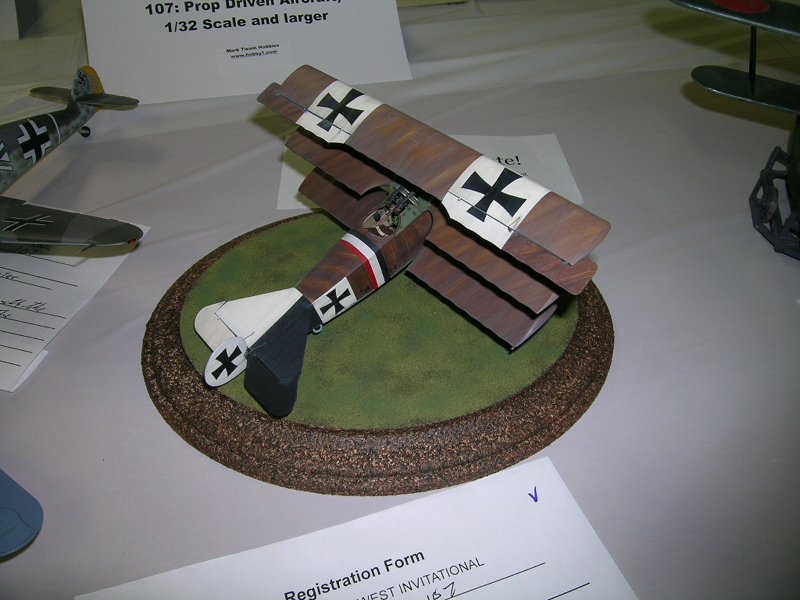 And a reward for the time and effort that went into this model. I was very pleased, that's for sure. 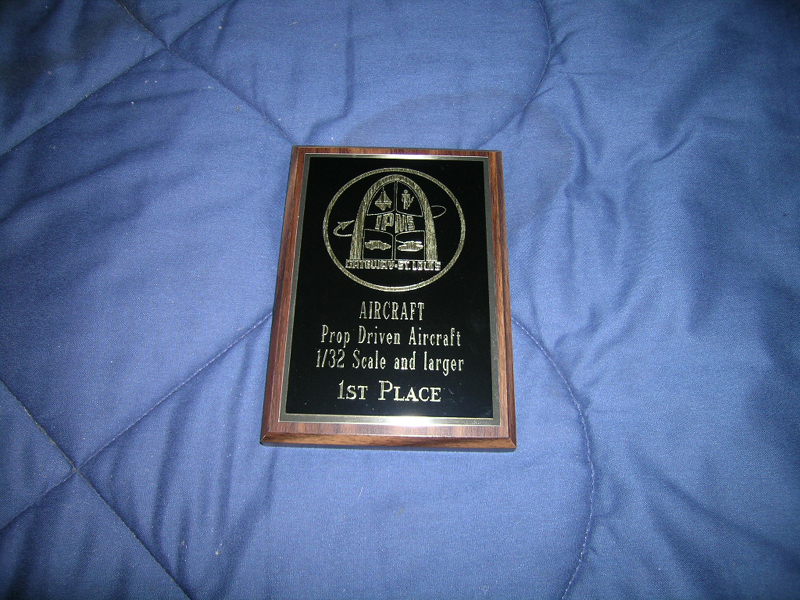