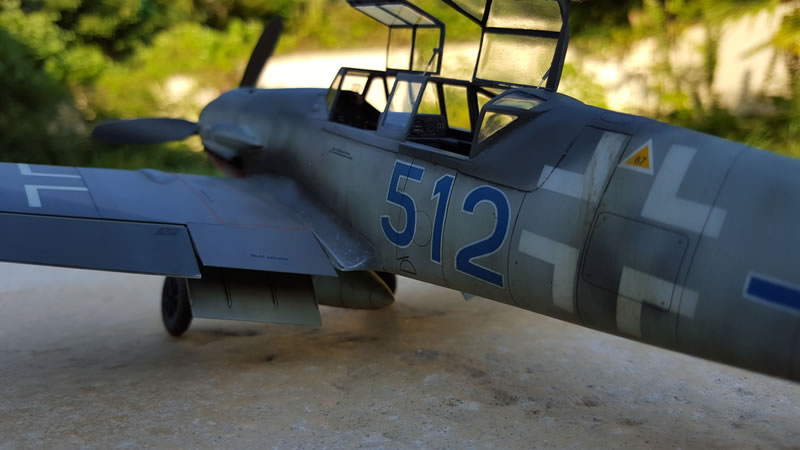 This is the nice Revell Bf 109G-6 kit, with the Alley Cat resin G-12 conversion, the G-6 correcting and detailing set (with propeller, exhausts, ailerons...) and a G-4 set (to get the G-4 engine cowling and early wheels). In fact I don't really know if the aircraft I'm depicting was really based on a G-4, but too bad. Anyway, there is only one picture available as far as know.

The build was very fun and without any major difficulties. Fitting the canopies was not very easy, but doable. The fuselage conversion needed a few adjustments but with some patience and some putty, it worked like a charm. The front cockpit is out-of-box and the rear one is what is inside the Alley Cat conversion without any major modification, as it seemed accurate to me (at least with the very few pictures available). The only modification i did were the rear front office (I reshaped the upper instrument box) and the rear bulkhead as this part was not accurate in my opinion, though. Otherwise, I just added two RB seat belts sets, and an Aires gunsight. For the canopies I added some brass sheet rectangle to make the hinges and scratch built the small rods.

Regarding the paintjob, the RLM76 was painted with AK paint. It was the first time I used them, and I was a bit surprised, and not really happy with it. I was absolutely unable to spray small details (for the mottling) as I can do without any problem with the Gunze paints I'm used to. I must be me as many of LSP members here use the AK paint and are very happy with it. For the RLM74 and 75, I used my usual Gunze paints, as the colors seemed better to me, and at least I could control the spray.

Every marking were painted with custom masks. The markings for this specific aircraft were included in the Alley Cat set, but the 512 was supplied in yellow and black or white and red.

The final process was the weathering. I used various AK and Mig washes and filters, and added some black pigments around the exhaust staining and some dust on the belly and wheels.

I know my choice for the red lower engine cowling may be a bit surprising and appear weird as it's very unusual in the Luftwaffe schemes. But this profile doesn't seem so incoherent when one changes it in B&W and compares it with the period picture. It may be fictional, it may be not. Nobody knows. And it was a training unit, so everything is possible. Anyway, I think these colors are a nice change in the usual Luftwaffe schemes.

The final process was the weathering. I used various AK and Mig washes and filters, and added some black pigments around the exhaust staining and some dust on the belly and wheels.

To sum up, it was a funny build, sometimes a bit longer (longer than a usual Bf 109 build), but very interesting. I really love the look of the 109 with that long greenhouse lookalike canopy. A very nice addition in a Bf 109 collection.

There is the a build thread for this model in the forums.