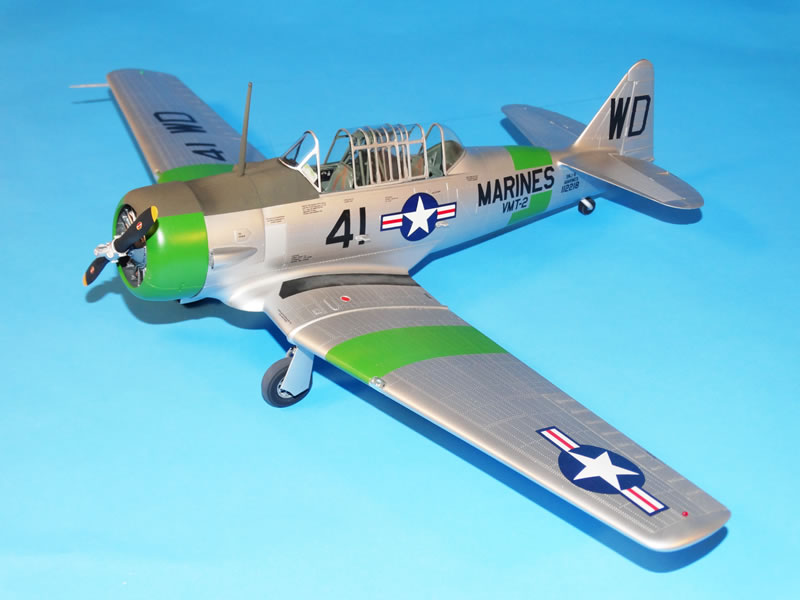 This is Kitty Hawk's first 1/32nd scale release and it shows in every aspect of the build (poor fit, over engineered assemblies, bad decals, etc.).  It was a real chore to get this one finished without sailing it out a second floor window of my house.  The main issue with the kit is that the landing gear struts are mounted too far inward, so I moved their mounting points 3/16" outward so the gear is now where it should be.  As they come in the kit, the clear parts are for a later T-6G variant.  In order to do an earlier version, I used Alley Cat Models replacement clear resin pieces, very well done.  I believe Alley Cat is now out of business, but you can find their products on eBay from time to time including this earlier style canopy set. [Ed. note: Alley Cat is still in business, but did change ownership recently.]  I also used a set of T-6 seat belts and lap belts by Eduard which are 100% better than what comes in the kit.  Finally, I also used a replacement prop from AMS Resin that is better in shape than what Kitty Hawk provides.

All paints are by Modelmaster. I painted the model overall with Non-Buffing Aluminum and then did a bit of tonality with other shades from their line of metalizer paints. The fabric areas were painted with Flat Aluminum which I find replicates these doped areas very well. The Willow Green cowl and bands are also in MM’s line of enamel paints.

I had decided early in the build to do a SNJ-6 instrument trainer flown out of El Toro, CA. in the late forties by the USMC. They used a black font and size of ID letters and numbers that I could not find on any aftermarket sheet, so I had these made by someone in Canada who does private printings from time to time.  They were very thin and went down beautifully, but the black ink scratched very easily if not careful in their application.

This was a tough build because of the poor fit of some of the parts, but I am looking forward to doing their T-28B/D Trojan. As Kitty Hawk releases newer kits, I think their quality and fit is getting better and better. I just wish they would not over engineer some of the subassemblies. In my opinion, there is no reason an engine assembly has to have 50+ parts when all you can see is the first row of cylinders. Manufactures like Kitty Hawk, Trumpeter, ZM, Tamiya, etc. should take a cue from Hasegawa and give you a kit with excellent fit with minimal parts. 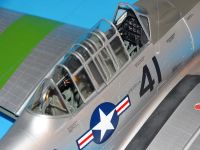 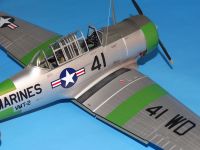 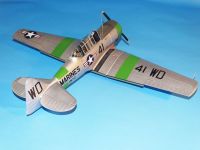