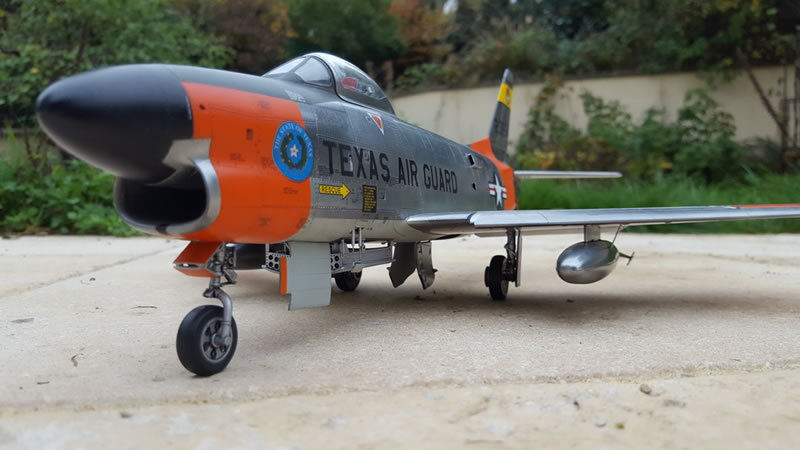 I finally finished my Kitty Hawk F-86D, painted with Texas ANG markings. The build is OOB, with the only addition being the fabric seatbelts from Eduard/HGW.

I started it in August during my holidays, but I only cut, cleaned and glued small assemblies at this time as I was not home. I started painting and assembling it only in late August. It was not so long as I build another small model since then, so it took me about 2 months in all, but I did not worked on it every days.

It was first primed in grey, sanded smooth and coated with Alclad gloss black. Then I polished it a lot with micromesh 12000 grit and applied a mix of AK chrome and polished aluminium. Compared with the Alclad high shine finishes, the AK are a bit less reflective, but still quite good, though they are way stronger to adhesive tape and various manipulations. I used the stencils and emblems from the box, but most of the markings (ANG markings, stars-n-bars and also the walking area border) were painted with masks as I found the large decals from the box quite tricky to use and the national insignia blue was too light. Anyway, it's always better to paint on a NMF model as you avoid any carrier film, difficult to blend in when you cannot use any varnish coat (it would kill the sheen and the reflection).

There has been a lot of masking for the dayglo orange surfaces, the surface treatment on some aluminium parts, exhaust area, and markings, but I 'm quite happy with this original and colorful scheme.

The weathering was quite light as on this kind of polished finish, there is not a lot to do. A just highlighted the panels with a UMP wash (no enamel wash as the AK metal paints are enamels so I did not want to experiment something that could ruin everything!), as without it it looks a bit toyish (I mean when you can see the bottom of the panel lines painted on...). On the dayglo areas, I did not used "dark dirt" was as it would be too dark and would be unrealistic, so I used "rust" color instead.

The build itself was not the easiest I did, but it was quite pleasant. Nothing was really difficult to solve, though it sometimes asked for a bit of thinking and a lot of trimming. Of course, some putty was involved, too. I have two other of the kind in the stash (F-86K, which I plan to build as a French and a German aircraft) and I think it will be easier next time now that I trained myself on this one. :) I hope you like it. As usual, I took indoor pictures (but with daylight) on a blue background (i prefer that that the usual white background which is too aggressive for the other colors, though my blue is too vivid. I should find a kind of neutral grey background...) and then full outdoor pictures.

Here is the link to the build thread: http://forum.largescaleplanes.com/index.php?showtopic=64229.