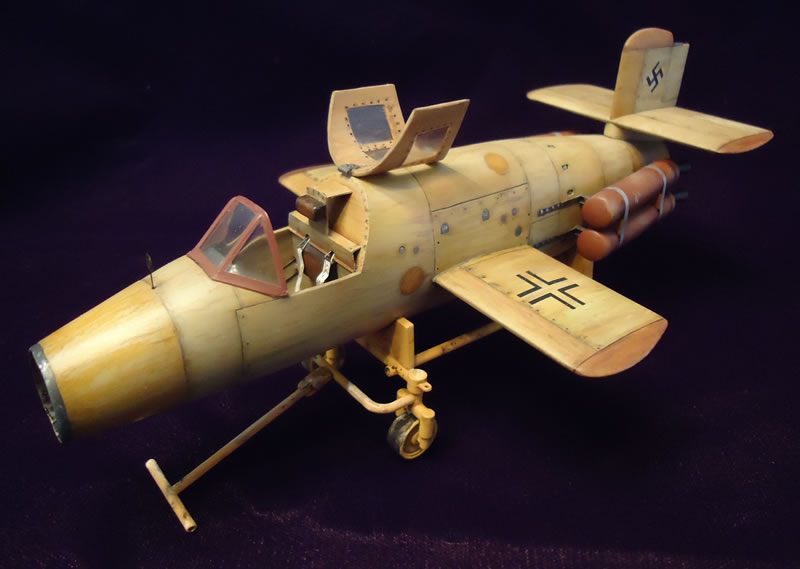 When dealing with space issues, you build small models. However, I'm hooked on 1/32-1/35th so I have to focus on smaller aircraft in this scale.

Enter the Fly Models Ba-349 Natter. I remember back in college that someone made a vacuform version of this interesting aircraft, but my skills at the time weren't really up to it. The Fly Models Natter comes in two versions, which I believe are simply reboxing with different decals, as there are numerous options for both the nose and tail sections available within the relatively simple kit. It also comes with resin bits and well as some nice photoetch to cover some of the details as well as seat belts, so despite its simplicity, it's really quite complete. Looking over the marking choices, it seemed to be mostly variants found in museums -- choices that really didn't stir the blood. Consequently, I decided to opt for a mythical operational craft, made as they might have been in the last gasps of the Third Reich. Bare wood for the most part -- after all, why waste paint on a one-shot weapon?

This gave me a chance to practice some of the plywood paint techniques that I'd been hoping to utilize for other projects. Knowing that decals for this existed, I wanted to try my hand and reproducing these effects with paint. This involved a sand-colored base coat, followed by various glazes to alter the tone on separate panels, followed by some delicate hand painting of the grains using thinned oil paints. Finally, another overglaze of Future Floor polish to give a semigloss varnished look, and I was pretty satisfied with the results. The metal parts were left in their primer colors (once again, why bother finishing them?) and simple stenciled markings, and I was done.

Admittedly, this is not an accurate model per se, but since this little beast never became operational, the choices were up to me. For such a small thing, it does take a nice place in my collection. Now, if someone will make an injection molded model of the Japanese Ohka, I'll have something else to play with! 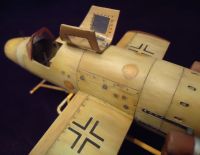 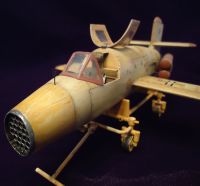