It’s big, it’s expensive it’s fantastic. It comes in a box full to the brim on nineteen sprue frames and a few odd bits, there are metal inserts for the undercarriage and a choice of rubber or plastic tyres for the wheels not forgetting the screws and screwdriver. Along with this comes a giant decal sheet plus a second smaller sheet with markings for all the stores. There is so much to do that it takes a forty-page instruction booklet to handle it all. The kit parts are nicely presented in the box with a clear view cover and separate box for the loose parts. The plastic mouldings are of the highest quality with engraved panel lines and the fit is excellent with the exception of the two intake lips. 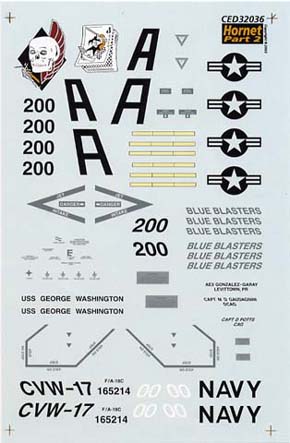 The cockpit is nicely detailed but there are three cockpit sets from Cutting Edge which make all the difference and these are for three versions of the Hornet, an “A”, an early “C” and a late one, also from Cutting Edge are two new decal sheets “Hornet’s revenge” parts one and two, I chose the late C and made the model up as the “CAG” bird of Capt Dana Potts, VFA-34, CVW-17 aboard USS George Washington. 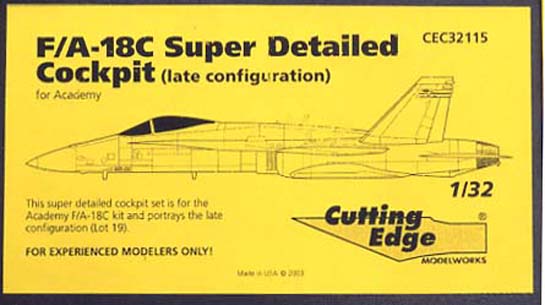 The kit build starts at the cockpit as usual an it is pretty obvious that there is going to be a two seater produced at some time as the tub has two places and there are two seats but the second is covered by the solid rear decking. 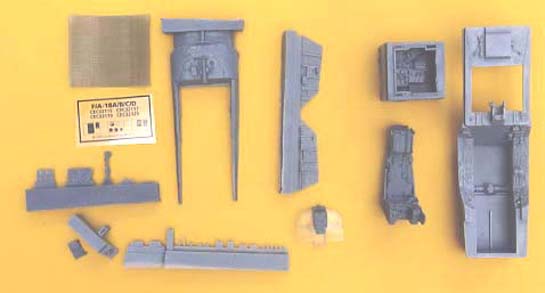 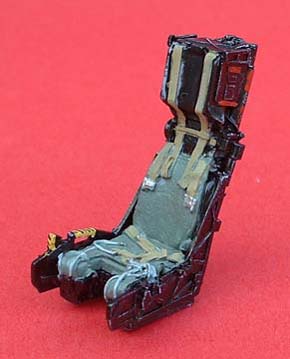 I decided on the Cutting Edge update set with its one place tub and open rear decking. This is a work of art with separate centre console, individual rudder pedals, HUD unit and instrument coaming plus clear resin instrument panel, the seat is very nicely detailed with seat belts looking quite realistic. New side walls are provided for the cockpit and the equipment bay comes as a separate section with several boxes to place inside, a nice touch is the fine wire mesh supplied to cover the bay with along with a pattern for cutting to size. The one thing I liked about this set was the fact that there was very little sanding to be done to remove pouring blocks, the tub needed light cuts along the side and the equipment bay needed none at all.

The seat needed a razor saw cut and the instrument panels only needed the holes clearing the rest were cut off tiny mounts on the main blocks.

A new canopy frame is provided to replace the kit item, which only goes half way along the bottom edges and meets a moulded on section, this is to be removed before adding the new frame, it can be done at the same time as you remove the centre mould line along the canopy and wind shield. I just sanded the line off with fine wet and dry paper then sanded the area with a worn out piece of 1200 grade paper before polishing with canopy polish.

The undercarriage is a true replica of the real thing, I think every part on the real legs has been reproduced in plastic and these encase the metal inserts to take the weight of such a large model, I was so impressed with these I made them up first and it took me two full days to do three legs. Note the separate anchor shackles. 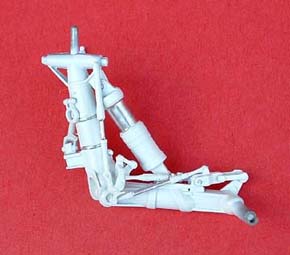 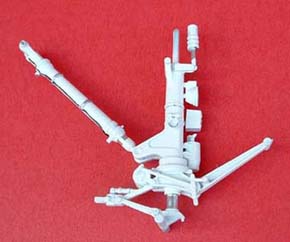 Step 3 The nose wheel bay comes as separate pieces, walls and roof etc. etc. these are worth painting before assembly as there is so much detail there and colour notes are provided in the step.

A tip here, the colour list is on the back page so I photocopied it and hung it up in front of me to save keep turning the sheet over.

Step 4 Check the insides of parts G 47/48 for ejector pin marks, as these will interfere with the fit around the metal leg.

Step 5 You must fit the nose gear in at this step as the fuselage halves prohibit it later.

Step 9 This is where you must make up your mind if you want folded wings or not, care must be taken with the cuts but there is no need to add the outer panels until much later in the construction. I have heard that there are problems with this configuration but I have seen it done without problems and I could not foresee any myself. 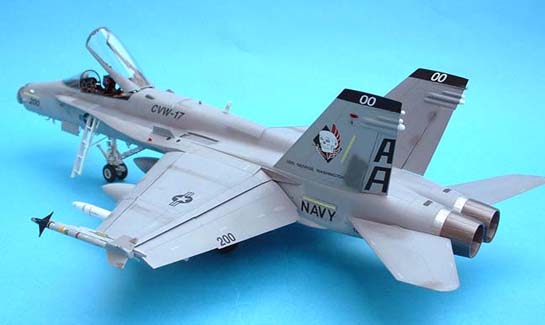 Step 11 this is where there really is a problem, the intake lips parts B 31/32 do not want to fit flush with the sides of the outer walls I had to use filler and some sanding to blend them in, several modellers have reported the same problem but one guy says the answer is to fit the intakes first then add the side walls parts A3/4 from step 9 afterwards.

Step 12 The leading edge extensions were added here and I added the upper and lower nose sections parts E 13/14 from step 20, part J 15 is placed in position but not cemented and the whole section was held together with an elastic band to maintain the correct cross section. At this stage I cleaned up all the fuselage joins before thinking about any further additions. 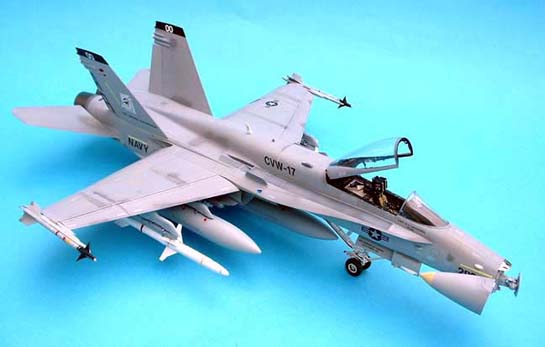 Step 14/15 decide which angle you want your flaps set at and add the appropriate hinges, check alignment using the flaps themselves but don’t cement them, leave overnight to harden. Take care to get the slats on the correct side, they can be confused.

Step 16 Even if you are not folding the wings you need to make the cuts in parts E 5/6 to give the correct look.

Step 21 Radar time now, there is a good replica of the real unit which will slide in and out, if you wish to show it off I would suggest that you leave it all off until late in the construction as with such a large model it can easily get damaged. 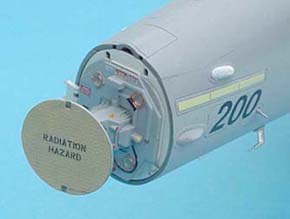 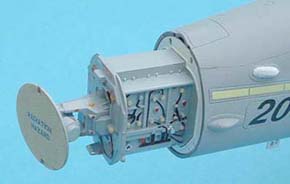 Step 22/23 Some of the tiny linkages on the main gear are a tight fit but don’t force them as they really are tiny and could easily break just add a touch of liquid cement and they will slip in a lot easier, parts J 31/32 have a small location on the bottom end, make sure you don’t cut this off thinking it is a moulding tab. I suggest you make one leg at a time as some of the linkages are handed and could be placed wrongly. The main gear can be fitted without cementing and I removed mine while I sprayed the whole model using the gear doors held in place with a blob of BluTack as masks for the bays.

Step 31 I wanted my canopy open to show the cockpit at it’s best but the kit lifting ram part J 52 seems a little weak so I cut it off and replaced it with a cut down pin, not quite the correct shape but it will stand the test of a few knocks. Note the folded back cover on the equipment bay, this is not unusual on the deck but would be closed for flight. 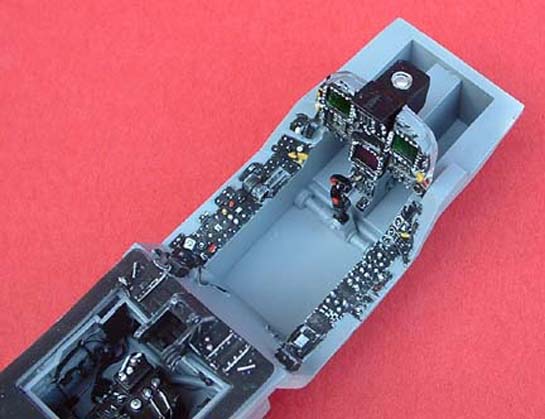 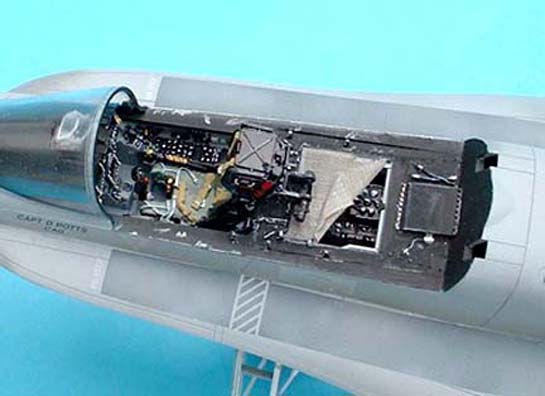 That’s about all the construction problems I found and the remainder is a simply boring job making up tons of weaponry very little of which you can use at one time, there are four large frames of bombs, missiles, launchers and pylons for you to make up any conceivable load for the Hornet. I made up just a couple of each item just to show around. At the end of the day I filled the small box that the metal parts came in with leftovers from missiles etc. etc. and two seater parts.

Painting and decorating, there are only two shades of grey on this bird and many brands of paint carry these in their range, I personally used the Humbrol “authentics” tins I had, after leaving for a day to harden I dusted two coats of ”Klear” and then a good glossy coat.

The decals supplied by Cutting Edge give the essentials for Capt Dana Potts aircraft but you need to use the Kit sheet for the data stencils, one point here the formation lights along the fuselage and fin are supplied as separate pieces with raised edges representing the frames, now the kit decals are tailored to fit these where as C.E. decals are a fraction too long and will not lay down in the recess. 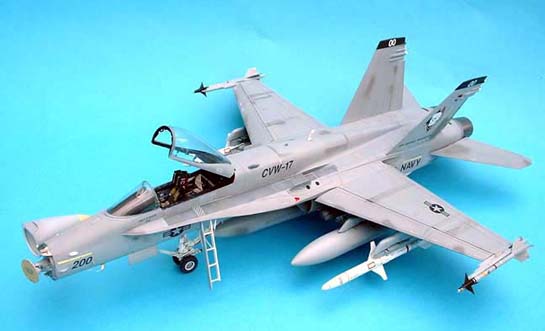 A fresh coat of Klear now seals the decals in and a mix of three parts Klear and one part Tamiya flat base was dusted over to bring the whole model back to a low sheen. I did some weathering but not much as this is a CAG bird and the photos I have of it show quite a clean machine.

Now is the time to add all those extras such as nose cone and radar if displayed open, missiles, fuel tanks and cockpit furniture oh and don’t forget the wheels, you have a choice of tyres, rubber or plastic, I chose plastic as I heard that the rubber tends to rot the plastic after a while. 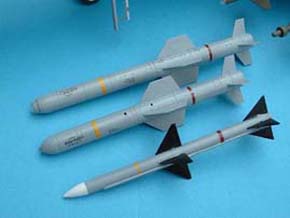 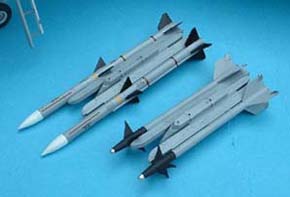 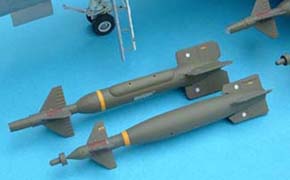 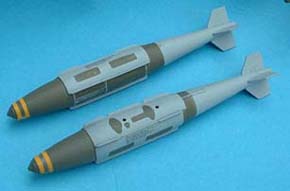 When it comes to engine exhausts you have a choice of four sets, open or closed petals with appropriate inner petals and there are different petals for early and late engines, I chose the later ones and coated them with Alclad II steel. 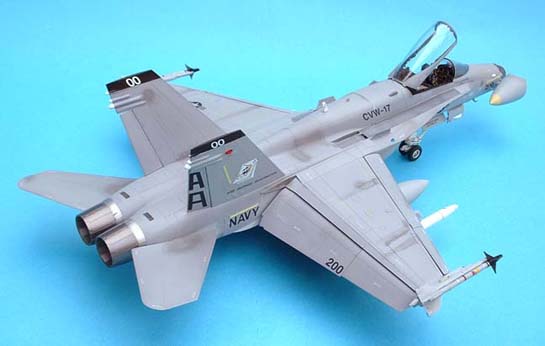 Four figures are included in the kit, two pilot figures in different poses and two ground crew again in differing poses, this pair have decals for various operations on deck on the sheet, I have put them together but I am no figure painter and so they remain in the box for now.

It’s big, it’s expensive it’s fantastic, but I like it. If you have the room for it go for it you won’t be sorry.