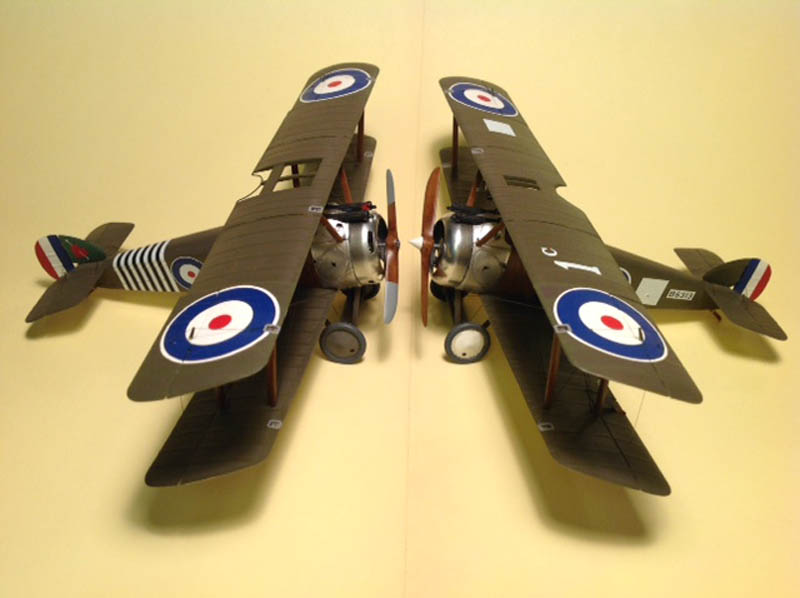 B6313 in late 1918. Note the victory "notches" painted on the left interplane strut, the upper wing cut-out, and the four cooling vents in the cowl. Barely visible in this photo is the "little red devil" mounted in the right hand Vickers gun: 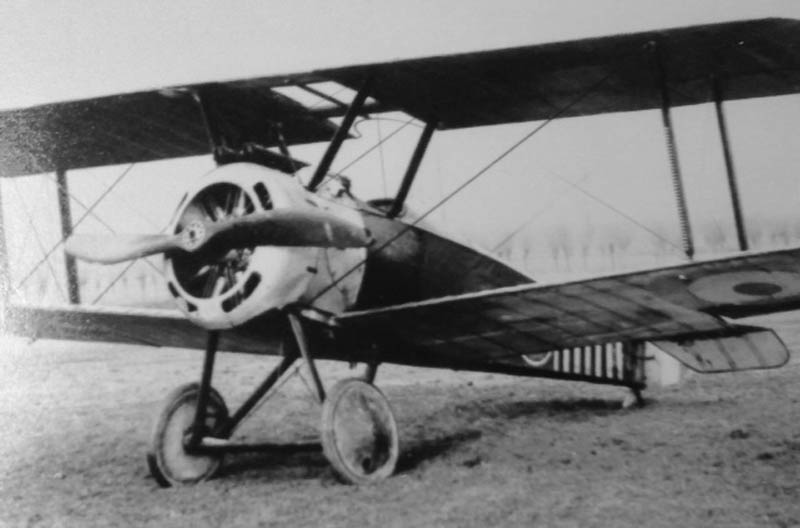 Canadian Ace William Barker flew Sopwith Camel B6313 from September 1917 until October 1918. During that time it was repainted in at least five different marking schemes. After more than a year of combat flying, it had also been significantly modified from the original to a more "souped up" version of the Camel to Major Barker's personal taste. I've chosen to create two models of B6313 to reflect the very first and the very last renditions of this famous aircraft.

Sopwith Camel B6313 was flown to France in September 1918 by Canadian William Barker when he joined 28 Squadron RFC. Squadron markings consisted of a white square applied to the right upper wing and on both sides of the fuselage, and white wheel covers. In addition, the individual aircraft number and assigned flight markings were marked on the upper wing and fuselage. In Barker's case, B6313 was the first aircraft in "C" flight, designated by a large "1" with a small "c". Cowlings and forward fuselages were left in bare metal, while the area on the sides and behind the cockpit were left in clear varnished wood. B6313 also sported a small white painted "Cone d'Penetration" on the propeller hub. As a Flight leader, Barker would also have had red and white command pennants on the rear interplane struts. In November 1917, 28 Squadron was transferred to the Italian theater, where the markings for the aircraft and flight number were changed to a large "N" on the upper wing and fuselage sides replacing the aircraft and flight numbers, but the white square was retained.

Barker was again transferred to command 66 Squadron, RFC in April 1918, and B6313 went with him, even though 66 Squadron was equipped with the Bristol F2B. His new Squadron markings consisted of a black cowl and forward fuselage, and a band of four white and three black stripes forward of the tail empennage. Squadron aircraft also had black tails with a red heart pierced by an arrow leaning towards the rear, and the propeller "Cone d'Penetration" was repainted red. Later, B6313 would return to a polished bare metal cowling and forward fuselage, but the white/black fuselage band increased in length, and it's tail was re-painted in medium green with a forward leaning pierced heart motif. Sometime during his tenure in Italy, Barker "acquired" the radiator cap decoration from an Italian automobile in the form of a "little red devil". He mounted this "mascot" as a sighting device over his right hand gun. Barker also had the upper wing fabric over the cockpit area removed to increase visibility, and had four large equidistant holes cut into the cowl for improved cooling of his Clerget engine, making B6313 look very distinct from other Camels. British pilots were discouraged from marking their aircraft with "victory tallies", however, Barker kept a score of white "notches" painted on his left forwarded and outboard interplane strut which eventually totaled 49 confirmed "notches" by the time he left Italy.

In October 1917, Barker was transferred back to the Western Front and France where he received a new Sopwith Snipe, which he painted to resemble his beloved B6313, with black and white stripes on the fuselage forward of the tail empennage, and mounting his "little red devil" over the right machine gun. B6313 had ingloriously been relegated to an RFC disposal depot in Italy, but Barker managed to "liberate" the chronometer and the red devil before leaving it. In October 1918, Barker became famous for single-handedly engaging an estimated 60 German aircraft, and managed to shoot down four more to bring his total number of "notches" to 53 recorded victories before he crash landed his Snipe while badly wounded. For this action he was awarded the Victoria Cross, Britains highest honor. Despite this high honor, a few weeks later he received a bill from the Air Ministry for B6313's "liberated" chronometer!

This is HobbyCraft's "Camel Aces" Clerget engined offering. This kit should not be confused with earlier HobbyCraft and Academy offerings, that had poorly detailed forward fuselages and unrealistic "valley and peak" wing ribbing, a condition the Academy kit still suffers from today. The HobbyCraft molds were originally cast by Academy, and a lawsuit ensued between the two companies in the UK and Canada for this and other "pirated" HobbyCraft molds. Fortunately for us, the result was that HobbyCraft improved the molds with this "Camel Aces" newer kit to compete with the Academy boxings. Many modelers still confuse the two kits, and HobbyCraft's "Camel Aces" boxings often receive an unjustified "bad rap" for the earlier kits shortcomings. Although still sparse in the cockpit area, the forward fuselage, wings, cowling, and others details have been totally revised and are quite nice. The wing is scale thickness and has prototypical rib tapes, fine aileron attachment points, and the cowling and fuselage panels have been revised to add fine detail and access ports, whereas the older kit still has the "trenches and lumps" in that area. The pan on the lower fuselage behind the engine has also been revised on the newer kit to reflect its correct rounded shape instead of the triangular shape of the old kit. All in all, the Camel Aces boxing is a nice kit.

Even though there are nice features in the newer kit, I undertook some scratchbuilding to improve the model:

This was an interesting build, taking about 90 hours to finish both Camels. However, I put way too much detail into the cockpits that really can't be seen. It also took a some self control to stay on task as everything had to be done twice, and it's easy to get bored while building two almost identical models. I have the Wingnut Wings USAS and Bentley versions of the Camel in my stash, which are incredibly nice. Their Clerget Camel can be built into a nice rendition of B6313, and it's more detailed than the HobbyCraft kit, but for the lower price, the HobbyCraft "Camel Aces" offering still builds into a nice model if you can find it. If you are interested in accuracy, take a pass on the earlier HobbyCraft and the new Academy offerings. Building the new Wingnut Wings Clerget Camel into a "late" B6313 should be a lot easier since it already has a wing cutout (not quite as deep as the final version of B6313 had though), and at least four cowlings with which to "practice" cutting vents into for the last version of B6313.