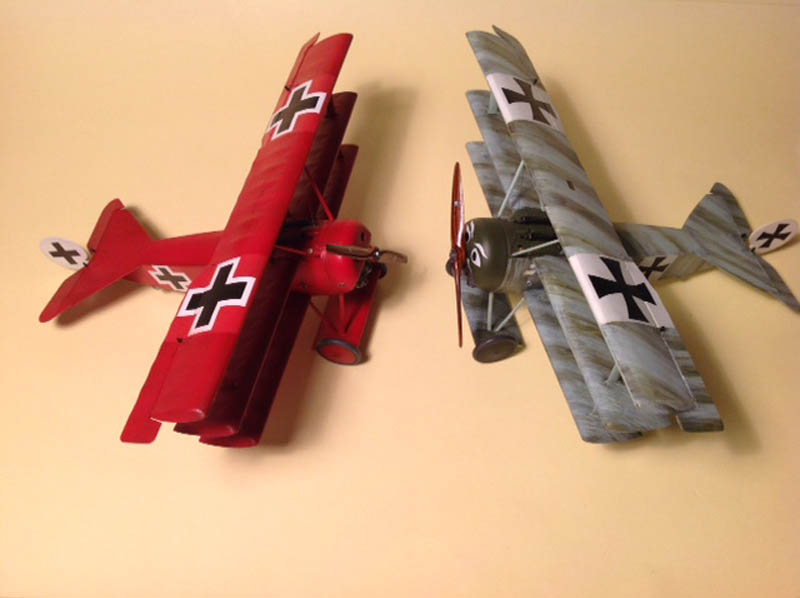 A Short History of Dreidecker Camouflage

The Fokker Dreidecker is likely the most famous aircraft of WWI, so it shouldn't need much of an introduction. The first five Fokker Triplanes were considered prototypes and were designated the Fokker "F1". The third and fourth F1s were given to Manfred Von Richthofen (F1 102/17) and Werner Voss (F1 103/17) who were Germany's top scoring Aces at the time, and good friends as well. These two F1s differed from the production Dreidecker 1s (Dr1) in that they had enlarged aileron balances, no lower wing skids, a slightly oval shaped rudder and the edges of the horizontal stabilizer were more curved into the fuselage. They also had a unique light blue "turqoiuse" painted fabric and olive drab streaking camouflage, which differed from the later olive and "cellulose linen" schemes of the production Dr1s. Richthofen flew a series of triplanes, his last being his famous all-red number 425/17. Voss only flew F1 103/17. The method for painting the olive "streaks" on the F1 and the later Dr1 consisted of a "single stroke" (that's what the Fokker paint shop called it) of a paint laden brush drawn diagonally across the upper surfaces, or top to bottom for vertical surfaces. The "single stroke" was supplemented at intervals by a "double" brush load of paint, creating an alternating pattern of light and dark streaks. According to contemporary reports, The F1s were described as blue-green, silver gray, or blue-grey in appearance when viewed at a distance. After his original F1 was lost while Richthofen was away, Richthofen flew a succession of different production Dr.1s with increasing amounts of red painted fuselage panels and wings, ending with Dr1 #425/17 which was completely red. This was the machine he was flying in April 1918 when he was shot down. Voss had a whimsical "Samurai face" painted on The cowling of his F1, and it's possible he had a yellow replacement rudder fitted too. There is a yellow rudder purportedly from Voss's F1 103/17 in the Imperial War Museum. What's known for sure is that Voss's original F1 rudder was white, but it might have been replaced at some point. Voss also replaced the Oberursal engine of his F1 with a Clerget engine from a downed Nieuport, as the Oberursal engine was considered inferior in quality. Richthofen's Dr1 425/17 was subsequently stripped of its fuselage and wing fabric by Australian troops and souvenir hunters after he was shot down, but small pieces exist in museums today.

I like to build WWI aircraft because of the variety of colorful markings used, and I can't always make up my mind which color schemes to do, so on occasion I build two at a time! The Squadron Encore F1 kit was used for Voss's F1, and it contains the basic Roden Dr1 kit with lots of resin and PE add-ons and Cartograf decals to make it into Voss's F1. A basic Roden Dreidecker kit was used for Richtofen's Dr1. Roden's kits are very good, but there are some minor fit issues when joining the wings together and along the fuselage seams - nothing that can't be easily dealt with by a little putty and sandpaper. 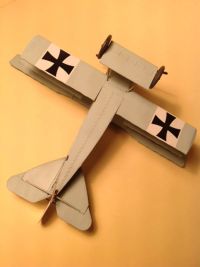 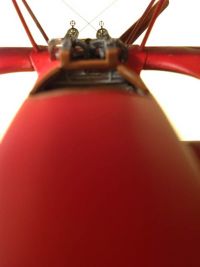 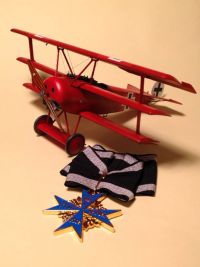 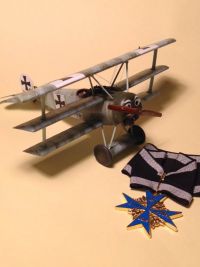 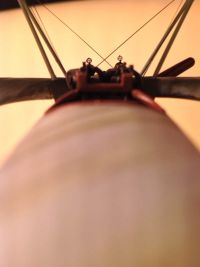 These were fairly quick builds, taking me about 50 hours for both Fokkers, but about 5 hours of that time was spent replicating Voss's "streaked" camouflage. There's not much rigging involved with these kits, which makes them nice for beginning WWI aircraft modelers. I used the Encore kit decals for Voss's aircraft, but for the Baron's 425/17, I used the "Baron's Tripes" Eagle Editions set, which is both comprehensive and complete. I highly recommend the Roden Dr1 and the Encore F1 kit to any modeler that wants to add a Dreidecker to their collection, and if you want to model one of Richtofen's tripes, the Eagle Editions decal set is a must. I posed the models with a replica "Blue Max" that I purchased from a local shop several years ago.