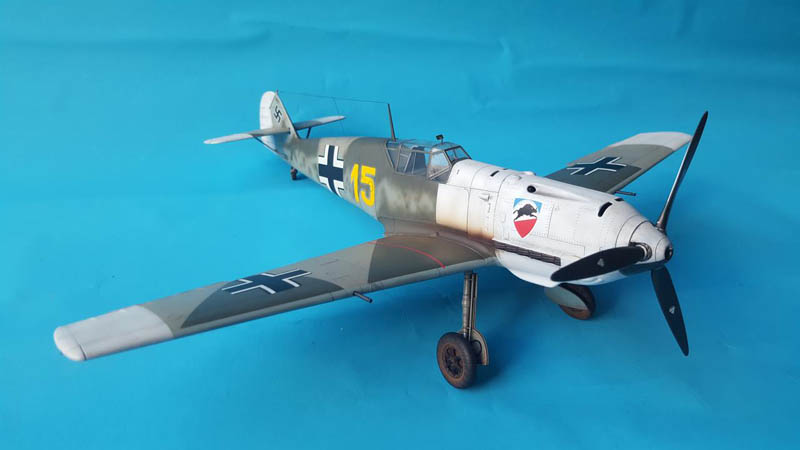 I thought it would be a quick build, but it was not. Not that the kit was bad, actually I think it's a very good kit, but I was very busy and tired those last weeks, so I was not able to do anything most the days.

It's the Eduard 109E-3 profipak. In fact, the only real addition compared to the weekend editions is a small PE fret, and a large decal sheet with 5 schemes. I have read many bad opinions about the Eduard kit, but I have to disagree. Of course it's no Tamiya, the fit is not perfect and some parts need to be cleaned, but it's not very difficult, and it ends up in a nice early 109.

It's obviously not my best build, but I just wanted to build something small and easy. I made a lot of mistakes (had to unglue the gear legs as I disliked the angle, and then I had to cut the wheels as I still dislike the angle, yes that's stupid to do that twice !) and I wish I would have made the camouflage more accurate, but I just said to myself "hey, it's just a hobby, forget it, and have a good sleep".

It's built out of the box, and I used gunze acrylic RLM colors. I applied a water based wash (Flory) and then an oil weathering, you know, the kind with thousands of small dots of oil colors and then you brush in the direction of the airflow. It looked nice, but this oil weathering just disappeared when I applied a coat of satin varnish over it. I just don't understand the phenomenon.

I also added some earth pigments.

I chose this scheme because I like the white engine cowling and the wild boar emblem. I like the small mirror on top of the canopy, too.