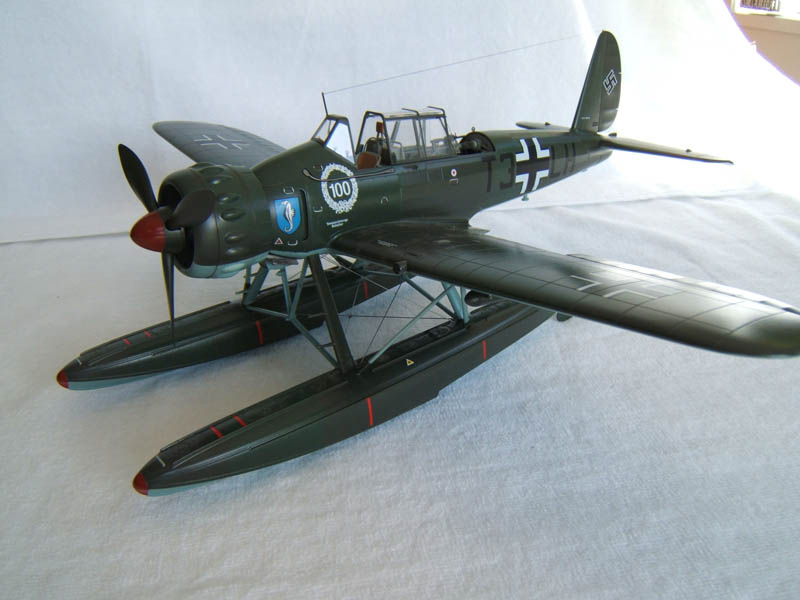 In autumn 1936 the technical department of the Reichsluftfahrtministerium (Reichs ministry for Aviation) issued a specification for a catapult float plane to replace the Heinkel He 50s then serving with the Bordfliegerstaffeln. These were the Luftwaffe units responsible for providing the German Navy with reconnaisance aircraft for its capital ships and other surface vessels.

The requirement was for a two seat, single engine, single or twin float, powered by an engine in the 8-900 hp range.

The Ar 196 was of all metal construction, the rectangular steel tube fuselage frame being faired to an oval section by the use of formers and stringers and metal skinning forward and fabric covering aft.

The wings were metal skinned two spar structures and hinged at the trailing edge to allowed folding back the wings for on board storage.

The twin floats accommodated one 300 ltr fueltank each.

Early summer 1937 evaluation flights were carried out. Two aircraft with a twin float and the other two with single central/twin outboard stabilizing float arrangement. The fourth prototype was the first to be fitted out with weapons. These consisted of two 20 mm MG FF cannon mounted in the wings and a single forward firing 7.92 mm MG mounted on the starboard side in the forward fuselage.

These four prototypes were powered by the 880 hp BMW 132 De radial, driving a two blade/two pitch propeller and were identified as Ar 196Bs.

Tests were carried out to find any differences between the hydrodynamic qualities of the twin and single float arrangements and no distinct advantages could be discerned. However, the twin float option was preferred and 10 pre-production Ar 196 A 0 were ordered.

Total production of the Ar 196 reached 593 aircraft. These numbers included those built in 1942-3 by the Societe Nationale de Constructions Aeronautiques (SNCA) at St Nazaire (France) and by Fokker in Amsterdam (Holland) from April to August 1943.

The Ar 196 did not only operate from all major war ships of the German Navy, but served in most major battle zones (the Atlantic, North Sea, Baltic, eastern Mediterranean, Adriatic, Aegan and Black Seas, often from coastal bases). 161 Coastal Sq of the Bulgarian Airforce and 102 Coastal Sq. of the Romanian Airforce were also equipped with Ar 196s.

The kit does contain 192 parts on 9 sprues of light gray plastic and one sprue of clear plastic.

Included is a stand for the display of the finished model.We also have a choice between 2 different propellers and the option to build the model with folded wings and open engine panels.

Surface detail is crisp and but there are a few sink marks to deal with and I found some small distortions around the cylinder heads which needed to be removed and carefully reshaped.

Revell decided to supply the canopy not in larger segments but has given us 9 individual panels which require careful assembly.

Instructions are easy to follow and a good guide through the build process.

The decal sheet does give us the choice between the markings of Bordfliegergruppe 196 (on board of German battleship Tirpitz Summer 1943) or the markings of III/KG 100 (Kalamaki Crete January 1943).

I have added some minor details by scratch building the throttle levers and the 4 levers on the bottom of the instrument panel. 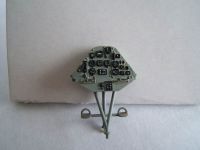 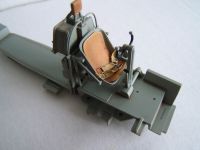 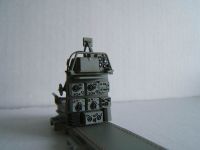 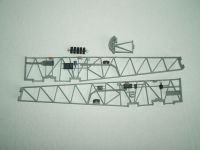 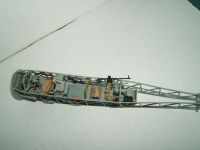 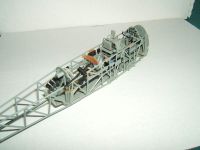 To enhance the appearance of the instrument panel I have utilized the dials from some left over decals and sealed these with tiny drops of Tamiya clear gloss.

The radio equipment details are all hand painted. The instrument panel situated on the top right has been prepared in the same way.

Stage 1A: The Engine

Here I had a problem with distortions around the cylinder heads close to the rocker covers. I had to carefully remove material and reshape the cylinder heads -- first with a scalpel and then I gave it a smooth finish with fine grade sand paper. Care had to be taken to get the shape right. 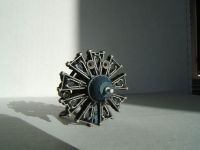 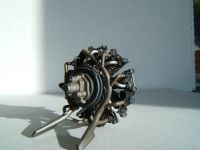 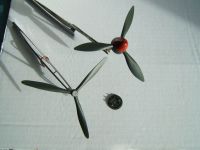 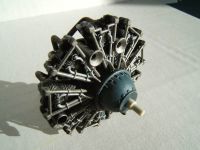 The only modification I have done here was to drill out the fluted carburettor air intakes. The kit gives us a solid part and that does not look right. That applies also to the exhaust mufflers and here I did the same to make them look more realistic.

I made sure that all parts fitted together nicely before I started painting the individual components of the engine assembly.

After putting all bits together I did some weathering with pastel colours. Must say this in itself does represent a nice little model of a BMW 132 radial.

With the engine and cockpit interior finished I moved on to prepare all the sub assemblies, i.e. the fuselage, engine panels, wings, tail plane, floats and supporting struts. The engine panels are not glued into place and can still be opened to display the engine. 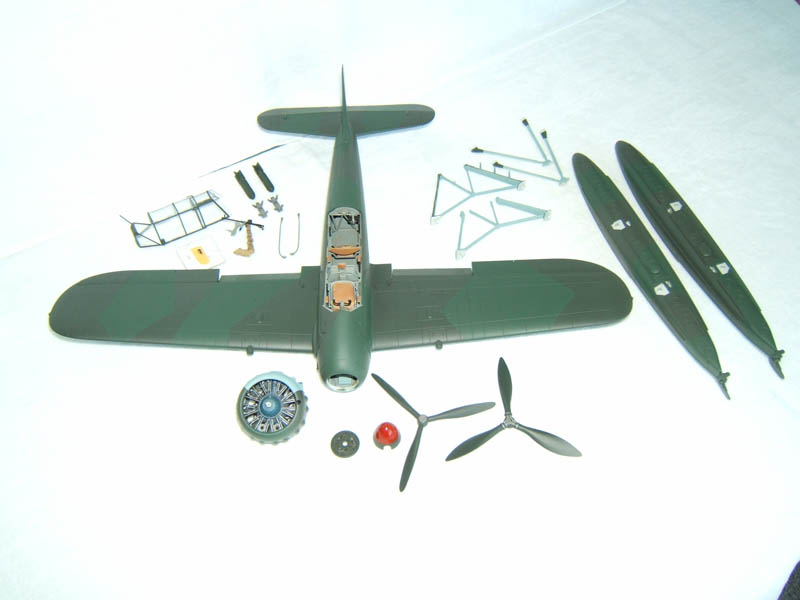 I have chosen the fixed wing position which required some filling and sanding at the wing roots plus making some adjustments re the the inner wing fillets next to the flaps using Evergreen strip. With the wings folded option this extra work is not necessary.

Especially delicate was the canopy. Consisting of 9 parts the interface between the individual parts – as far a the actual bonding surface is concerned - is very small and hence not very strong. As it so happened I had to deal with the fact that all 3 canopy components fell apart again and I had to redo them all over. In order to get the position on the fuselage right I fixed the canopy sides with masking tape to ensure proper alignment. After applying minute amounts of Tamiya Liquid cement I let the cement cure for a day before painting the canopy frame. To avoid putting pressure on the fragile canopy sections during painting I used pieces of cardboard with masking tape to fit the canopy parts onto these 'bases'.

The next step was to airbrush the overall camouflage scheme. I made sure that all the attachment recesses and points were masked off beforehand to avoid having to scrape off excess paint before gluing bits together. A thin coat of Tamiya gloss clear was applied overall to give the decals a smooth base to adhere to. When all the decals were on I sealed these with another thin layer of Gloss clear.

The bracing of the float supports was done with piano wire.

The final step was to glue the pre-painted canopy segments onto the fuselage and EZ Line was used for the antenna wire.

Assuming that planes aboard ships were not exposed to dust and grit very little weathering was applied by using Pastel colours.

The markings I have chosen are of the Bordfliegergruppe 196 on Board of the German Battleship Tirpitz summer 1943. 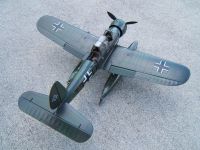 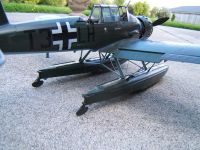 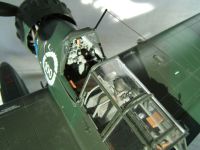 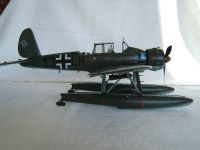 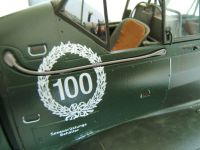 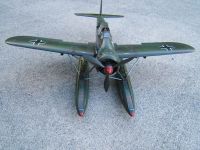 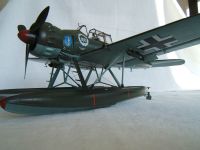 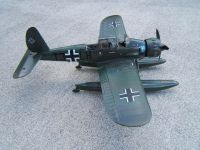 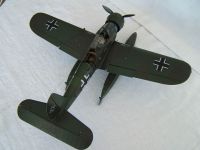 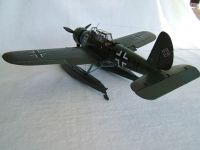 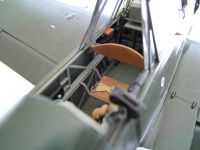 This article was published on Saturday, October 14 2017; Last modified on Thursday, November 16 2017