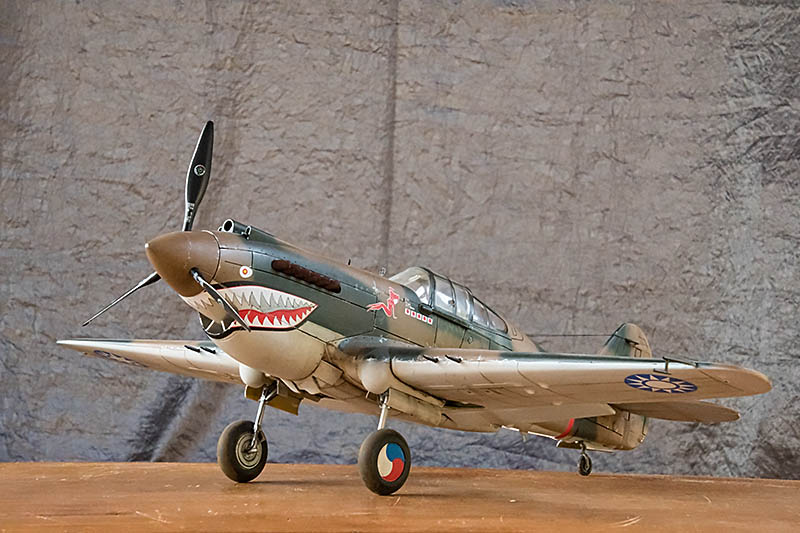 This is my Vintage Fighters 1:24 P-40C Flying Tiger, a large kit - which I believe now to be out of production – of a legendary plane whose actual denomination should actually be Curtiss Hawk 81A. The kit itself is a rather clunky affair, with deep panel lines, heavy-handed detail and toy-like features such as retractable landing gear, but its general lines appear to me quite faithful to those of the original, and in any case it was (and to my knowledge still is) the only P-40 kit available in this scale. Its most glaring fault is a ridiculously shallow and under-detailed cockpit, but since I always model my kits with a closed canopy that did not worry me too much. What really interested me of course were the much-debated camouflage colors (apparently DuPont’s own US versions of RAF Dark Earth and Dark Green – the planes flown by the AVG were supposed to be sold to the British originally, hence the surviving “empty” roundels on the top wings) and the gaping shark mouth sported by the original planes. I mixed my own shades of the DuPont colors using Gunze Sangyo acrylics and chose to model White “77”, the colorful mount of R.T. Smith. Extra information on the camouflage pattern and the placement of decals for this plane were provided by a 1:32 EagleCal sheet, with further details provided by Osprey’s American Volunteer Group Colours and Markings (Aircraft of the Aces 41).