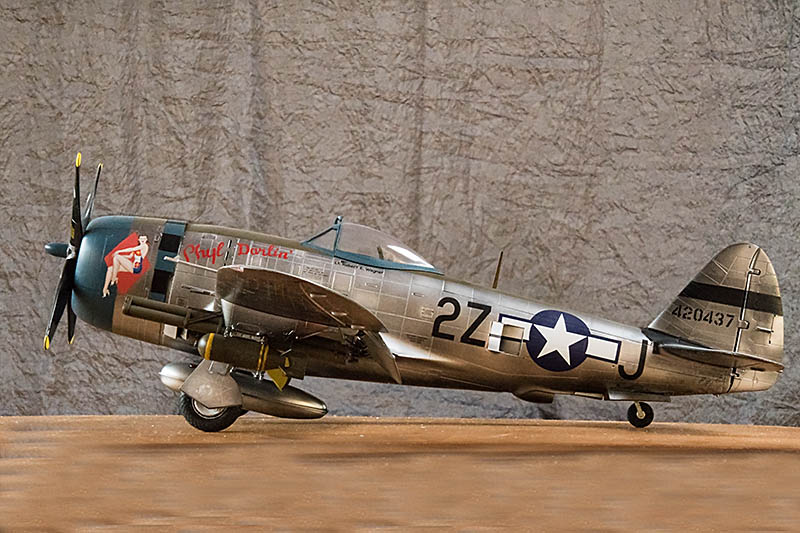 Here’s my Kinetic Models 1:24 P-47D “Bubbletop” in the markings of “Phyl Darlin'” as flown by Lt Wagner, 510th FS, 405th FG, 9th AF, in St. Dizier, France, in 1944. I am no Thunderbolt or USAAF expert, so any possible mistakes in the build are my responsibility only, but the ex-Vintage Fighters kit of the “Jug” – which when completed results in a scale model which is very big, very heavy and somewhat intimidating, just like its counterpart in real life – looks well-made, carefully planned out and reasonably detailed to me.

This was a strictly out-of-the-box build, my only modifications being changing the attack angle of the landing gear (if built as they are the legs are much too perpendicular to the wing), adding brake lines, scratchbuilding the intercooler exit doors on the fuselage sides (those provided in the kit itself being way too thick in this scale), superdetailing and wiring the engine (a totally useless endeavour as nothing can be seen once the cowling is on) and substituting the eight wing-mounted Browning .50 caliber machine gun tubes (which are provided as solid plastic rods in the kit) with hollow tubing. The completed model was finished in various shades of Alclad - with the cowling, engine, cockpit, landing gear wells and other visible internal structures done with Tamiya acrylics - and the kit decals performed flawlessly.