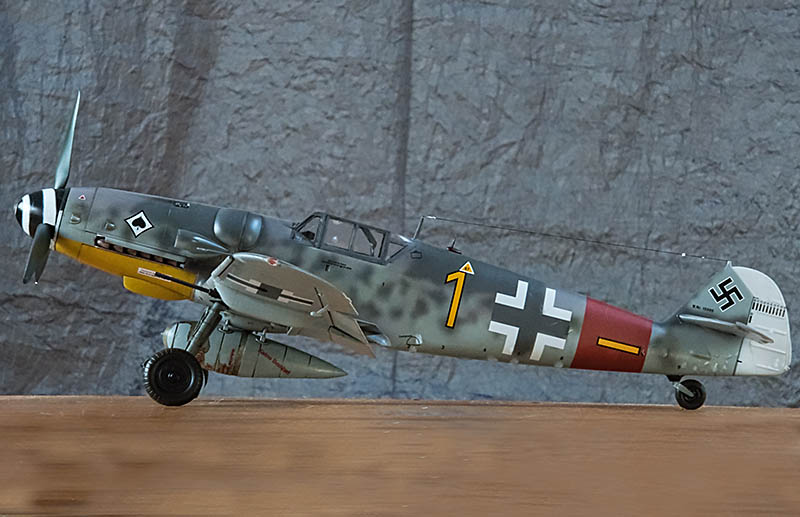 My Trumpeter 1:24 Messerschmitt Bf109 G-6 “Early” built and finished as the colorful Bf 109G-6/R6 “Kanonenboot” fighter flown by Alfred “Martello” Hammer, Staffelkapitän of 6/JG53,  when based at Wien-Seyring, (then Reich’s territory, now Austria), in February 1944.

The Trumpeter kit, which is quite accurate in most respects, well proportioned and very nicely detailed, was built strictly OOB without using any aftermarket items - like most of my models - and painted with Gunze Sangyo acrylics, with decals sourced from a variety of spare sheets. I kept weathering to a minimum, as contemporary photos show that during 1943-1944 most aircraft of successful pilots serving on the Western Front and on Reich’s Defence duties were kept in spic-and-span conditions by ground crews, being often waxed to a gloss to get that little extra edge in combat speed.

A seasoned veteran from the Mediterranean and North Africa fronts - where he successfully flew and fought from 1941 to 1943 - in January 1945 Hammer was finally appointed Gruppenkommandeur of IV./JG 53, based at Echterdingen and part of the Reichsverteidigung. He survived the war and was credited with 26 victories - all recorded over the Western Front and including two B-24 Liberators, eight P-47 Thunderbolts and five P-38 Lightnings - in approximately 500 missions.