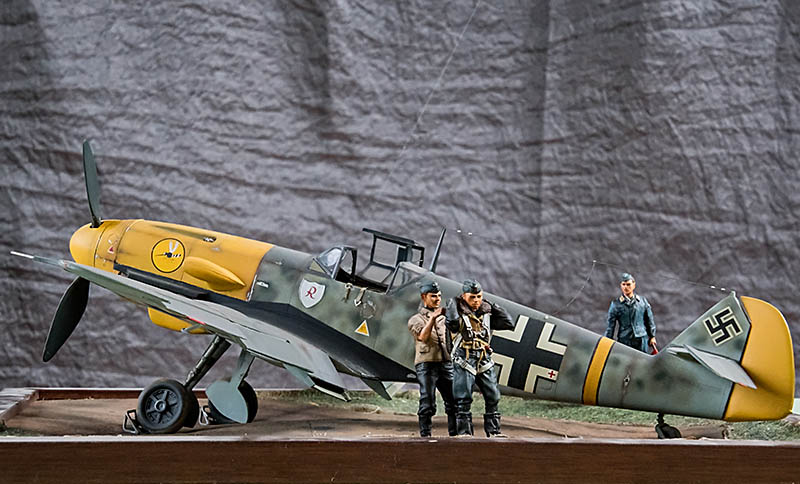 A very old vignette of mine dating back to the late ‘70s, now offered as a curiosity for simple nostalgia and documentation value. Channel Front, summer 1941 – aided by some ground staff, a 9/Jg2 “Richtofen” pilot suits up preparing to board his yellow-nosed Messerschmitt Bf 109F-2, finished in the striking markings of Oblt. Carl-Hans Roders. The figures are from the beautiful and well-detailed Ulrich Puchala range, while the model is the now ancient and quite primitive by today’s standards Revell 1:32 Messerschmitt Bf 109 F, originally released in the early 1970s and then many times reborn as a G under different – and equally striking – reboxings. The kit has a long list of faults – problematic outline, lack of details, molded-in control surfaces, featureless landing gear wells, sparse and underdetailed cockpit – so modeling one was a true work of love, even if at the time it was the only model available in this large scale of Willy Messerschmitt’s legendary fighter in its (very generic) F and G incarnations. All control surfaces – ailerons, flaps, underwing radiator shutters, rudder - were carefully cut out and repositioned, wing slats were separated and lowered and the airframe was completely and carefully rescribed.

Sadly the cardboard base on which the completed model and figures sit has sagged in time, so that parking spot is a bit too undulated now - breaking off the tailwheel during the photo session without me realizing it.