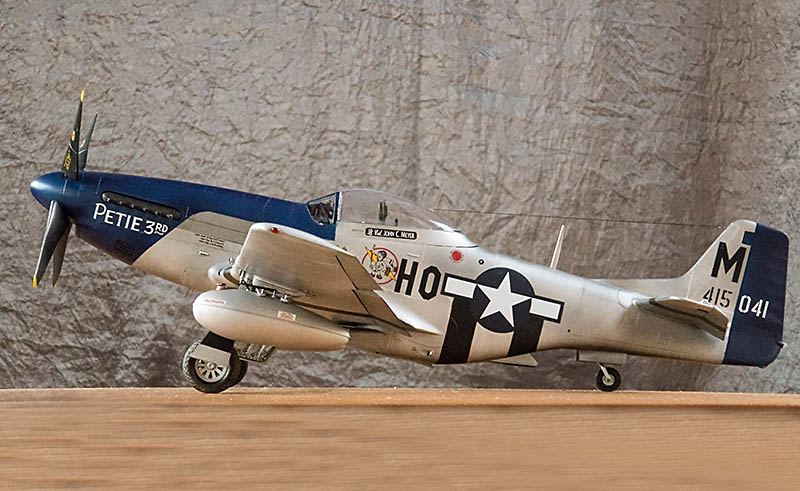 My Trumpeter 1:24 P-51D built and finished as the seldom-modeled “Petie 3d”, flown by Lt. Col. John C. Meyer, 487th FS, 352nd FG, 8th AF, Belgium, courtesy of Eagle Strike’s decal sheet “Blue-nosed Bastards of Bodney”. This was Col. Meyer's last Mustang - he used this aircraft to score 11.5 of his 24 aerial victories including an Arado Ar-234 jet that he downed on December 31, 1944. Having seen the amount of harsh criticism levied by many at Trumpeter’s kit – and being no Mustang expert myself – I approached the kit with some trepidation, but I must say the kit built well and with no major hurdles, and the final result certainly looks the part to me. I had to do some easy surgery on the 6 × 0.50 caliber (12.7mm) AN/M2 Browning machine guns to make them look the part, and the finished wings seem to show a slight but annoying degree of wash, but apart from this I encountered no problems. The model was finished in various Alclad shades on the fuselage and gloss silver on the wings, while weathering was kept to a minimum as the plane appears to have been kept very clean by the ground crew.