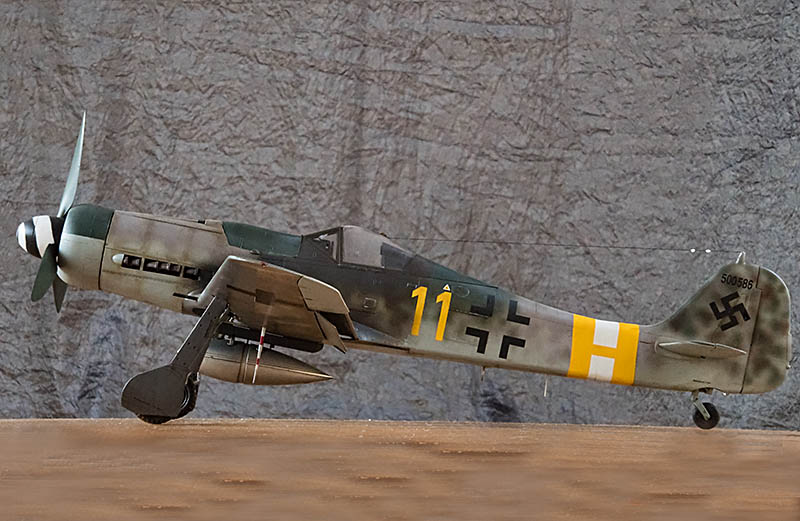 My Trumpeter 1/24 Fw 190D-9 was strictly built out-of-box like the great majority of my models, as I seldom use any aftermarket items besides the occasional and often much-needed decal set – after all this is a wonderful kit with just a sprinkling of little mistakes in a few details, which I did not bother to correct (most notably the curved piano hinge of the cowling, which should obviously be straight and which is not really easy to modify without some major surgery). Despite its (very few) faults, this is a beautifully detailed, well-molded and easily assembled model of the real thing, which when completed evokes well the lethal, reptilian sleekness of Kurt Tank’s late-war stop-gap creation. I finished it in the mismatched livery the often-modeled “Yellow 11” of JG2, but despite the relative fame of the original (I could only locate two good photos of it) I am still not convinced of the common interpretation being offered of the painting scheme seen of the wings’ upper sides (RLM 77 or an equivalent pale grey primer and RLM 82 Grun) – as an afterthought I have added a partial wraparound of RLM 75 Grauviolett on the leading edges, but in the available photos there also seems to appear a rectangular darker area in the center of the wing’s upper surface which I have not really been able to identify. I suppose we’ll never know… 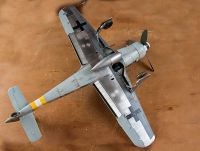 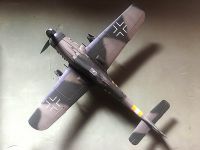 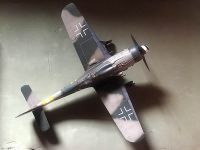