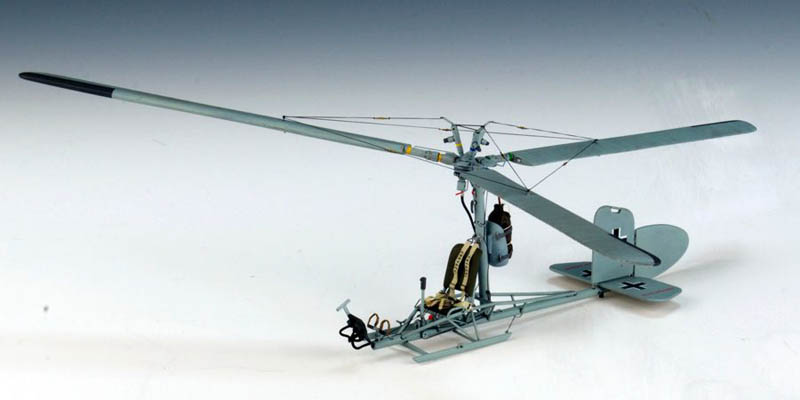 The Fa 330 Bachsteize (Wagtail) always interested me as a unique aircraft with an equally unique mission. This was towed aloft to about 400ft (120m) by the U-Boat so the pilot could see beyond the horizon view (25 nautical miles) and report any enemy activity. Stored in three watertight compartments by the conning tower a team of three can assemble and disassemble the Fa 330 in about 20 minutes.

U-boat commanders disliked the Fa 330 as the prolonged time on surface make their boat venerable to an air strike or detection by enemy ships. The Fa 330 was abandoned in the North Atlantic due to allied air superiority but continued use in the South Atlantic and Indian Ocean.

The only recorded successful use of the Fa 330 was 5 August 1943 by U-177 on the Indian Ocean off the coast east of Madagascar. Greek merchant ship Efthalia Mari was observed by U-177's Fa 330. U-177 proceeded to intercept the Efthalia Mari and sink her with two torpedoes. fthalia Mari lost 1 crew of 43.

Not a easy build as there was plenty of angst and head scratching moments. This build also gave me an opportunity to practice rigging as a Wingnut Wings kit will be landing on my bench soon. The build thread can be found in the forums.