Modeling In My Youth - A Christmas Tale by Mike Dobrzelecki

Hey, the Christmas story is on!... Anyone who has seen in the now classic holiday movie, in which Peter Billingsley covets the Official Red Rider Air Rifle with the 200 shot magazine and the compass in the stock, is usually transported back to a simpler time, a time of our youth, a time without deadlines and adults stress and responsibilities. As an official certified Baby-Boomer, and I certainly had my share of G.I. Joe's, Mattel and other "must have" toys on my Christmas "wish list" to Santa during the 1950s, 1960s, and early '70s, but the one thing that was consistent on these lists and the lists that persist now into Y2K is - MODEL KITS!

Even if I did not get any models as gifts, I always received folding cash for the holidays. I come from a large Polish Catholic family. My mother had 11 brothers and sisters and my father had two brothers and a sister. My uncles were especially reliable for giving cash - after all, real men in those days did not shop and a $5 to $10 gift went a long way back then. Combined with the money I got helping my old man sell Christmas trees (one of his many successful side businesses), I was a high roller, at least for a little while. Usually, there was a sufficient horde to pay for one or two movies and buy several kits. Living in the ironbound section of the Newark, NJ, specifically the "Down Neck" section, where Newark narrows on the map between the Passiac River and the Bay, we would hop on the bus to go to downtown Newark (it was always referred to as "downtown"). Remember, this was before the days of media induced rampant fears of child molestation and kidnapping, and a kid could take a public bus, even in a place like the evil city of Newark, NJ. The bus would drop you off at the crossroads of the world, Broad n' Market Streets (like Rome, all roads lead to Newark van and still do now). My brother and I would hit the old-time movie palaces, like the Paramount, RKO Proctors, Loews, Adams, or the Branford to see the latest flicks, favorites of which were James Bond, war movies, and anything with John Wayne. 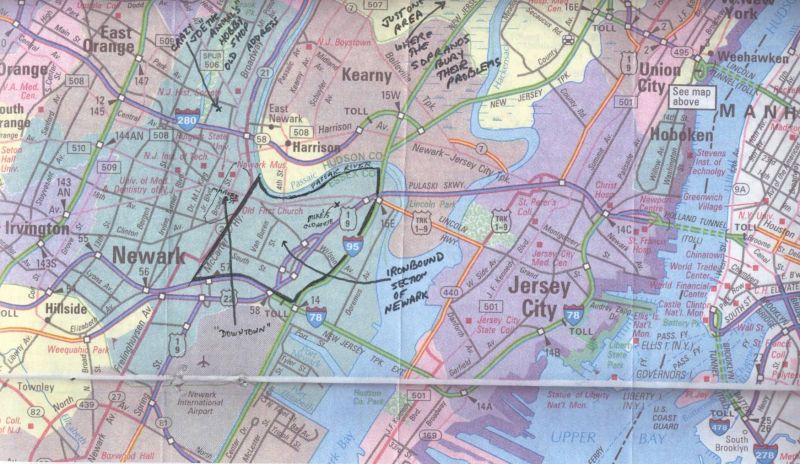 After the move the way would make our Mecca to all of the big-name department stores that carried hobby products, such as Woolworths, Two Guys (originally known as "Two Guys From Harrison" which was shortened when they later moved their flagship store to Kearny), McCrory's, S. Klein On The Square, all of which were in a 10 block walk. Although we knew of hobby shops down the shore, there were none known to us in Newark at that time. In fact, it was not until Crazy Joe "The Animal" Pezzino opened one up on Mt. Prospect Avenue in the North Ward, that I had one close by. Back then, the department stores had all we needed. We would buy the latest kits, usually Revell and Monogram, that 10 and 15 cent Testor's paints and a tube of that good ole high-inducing model glue. This would assure us hours of modeling heaven in-between snowball fight's and riding your sleds down the elevated embankment of the railroad tracks (the reason that section of Newark is known as the Ironbound is because it is surrounded on all sides by railroads). Later on in the 1960s, new exotic kits appeared from foreign companies such as Airfix (exclusively stocked by Woolworths) and the then-advanced flat paint available from Pactra at the premium price of 19 cents, which soon inflated to a whopping 25 cents.

Each new kit tested our every improving modeling skills, the bar getting higher and higher each year. It was a triumph to get the gimmicks to work on the Monogram kits, the bomb dropping SBD Dauntless, the clockwork mechanism on the 1/32nd scale Grumman F3F-3 retractable landing gear, etc. At least we could save time by not having to paint the Monogram U.S. Navy aircraft, SB2C, F6F, F4U, (hey, they were already blue and looked close enough to those in John Wayne's "Flying Leathernecks" to suit me!). The introduction of the Revell 1/32nd scale aircraft, the Spitfire, the Bf-109F, and the Hurricane were another quantum leap forward in modeling technology, worthy of ranking is a major milestone.

The other places we would buy kits were the local mom 'n pop variety stores, drugstores, and candy stores, of which there were hundreds, if not thousands along and off Ferry Street, still bustling commercial strip to this day. It was from one of these candy stores that I bought my first kit, a small-scale Spitfire, possibly Lindbergh for 19 cents. I was inspired by the models my eldest brother Dan built. His built-ups included many of the so-called collectibles and he guarded them from me as fiercely as a mother bear. His room was strictly verbotten, his models even more so. After all, I was like one of those Kamikaze Tots you see at conventions, poised to launch themselves at the models. This model though, was MY model plane. I do not know what was in the tube glue that is missing today, but I certainly used plenty of it on my trusty silver gray plastic Spitfire. So much so that I reduced the spinner to a state of perpetual molten plastic, albeit with a twist. This spinner could be molded at will with your fingers, squashed, bent in any shape or form and if left alone, it would eventually resume its original shape! Wow, this IS a great and wondrous hobby! I do not remember whether it was Revell cement, Testor's, or the dreaded ineffectual Le Pages glue. Whatever the medium, I have never seen that phenomenon since that first experience.

Having models became even more important if you happen to get sick just after Christmas, important to your well-being and your mother's sanity. After building the Christmas models, my brother Ron and I would have intricate battles based on the classical war movies we saw on TV. The battlefield was our bed with the covers and pillows the terrain. Looking back, they were pretty decent "living" dioramas. For a bigger battlefield one could push together the two beds (mom would be pissed for some reason if I did this). It would require a long set-up time with the actual battle unfolding gradually in stages like a movie, with our best and favorite figures and vehicles the loans survivors. The other figures and vehicles would be killed off and destroyed in turn, the timing of which depended on how much I liked the particular piece verses another. The Monogram Thompson gunner always made it to the end. "Sitting Down Guys" were also key figures, because we could put them in the vehicles as drivers. Tanks were shown to be destroyed by placing their turrets askew on their hulls. After awhile, I started to make my own hybrid vehicles, incorporating ideas and scenes from James Bond movies and sci-fi flicks. My award winning Fast Armored Air Boat Sci-Fi piece is a refinement from one of these creations from my youth. Normally, either my brother or I would play with the combined collection as a solidarity activity. On rare occasions when we played together, it was a long drawn out process dividing up the best pieces in turn (who gets the Thompson gunner?), much the same as picking teams where the best guys get picked first and the less talented picked last. Our differences in how to play were a minor source of disagreement, but there were also some variations in our methods that we wound up borrowing from each other. I still have many models and pieces in my spare parts box, now 37 years in the making, which I keep in my father's WWII army footlocker - a more fitting place, I could not think of.

It was a way to let my imagination blossom, when I was not out playing football, baseball or basketball with my friends in the schoolyard right across the street from me. Today's kids are not wired the same way. Modeling also helped me develop patience, concentration and skills in problem solving as a kid. My friends in school and in the neighborhood also built models, but few were as dedicated as the Dobrzelecki brothers. In my 8th grade graduation booklet prepared by the class committee, each student was given a name that best described them. I was dubbed, "Model Man", the first and only nickname, I ever liked. I still have the booklet in that purple mimeograph ink in use before there was ever such a thing as xerox copier in our world. My skills improved over the years and I also built car models back them, especially dragsters and other racing cars, such as the Don Garlits black job, the classic Revell 41 Willys and the MPC STP Turbine car (not the one re-released, the other, which now commands $400 from collectors, of which I only still have the red hood with the exhaust cut-out). S.Klein On The Square had a bonafide hobby department (not a toy department with models). which was run by a black gent. He used to hold regular car model contests in the 1960's which I won a few times (my first win!) - one piece being a conversion of the Monogram Half-track into a heavy duty dragster with a blown engine, slicks, mags, the exhausts from the aforementioned 41 Willys and a woefully inadequate drag chute. Looking back on this piece, I figure, once it got moving at speed, it was going to take a something more than that piddly little chute to slow down the built-up inertia. (Now that I am writing this I am making a mental note to think about redoing this with my current skills and 90's technology...and...hmm...I better add some extra drag chutes.) The best thing was the prize - a winner got ot choose any model he wanted from the store shelf.

Ultimately a few of the lesser quality models would be sacrificed in the usual Viking funeral and firecracker extravaganza held annually during the summer. These also turned into elaborate affairs with our ingenuity as mad bombers nearly matching Kaczynski's Unabomber fame. We built enclosed boxes under our ship models containing firecrackers or ash-cans and, with a nod to "Stalag 17", fashioned a crude timing device using a cigarette with the fuse string embedded in it (You'll poke your eye out, kid") The doomed ship then sailed down the Passaic river on its final voyage. Around this time of the year these childhood memories come flooding back to me. It is a break from the stress that comes with a career and dealing with aging parents. Christmas is one of my favorite holidays and my feelings about this hobby we are madly engaged in take a nostalgic turn. I hope that all IPMS members got just the right kit or figure they wanted in their Christmas stockings and maybe thought about their own holiday hobby memories.