This Revell kit is good with lots of realistic detail and the overall fit is excellent. The joints of the wings with the fuselage on the underside need some filler and reshaping, but without big problems. The only real problem are the transparent parts for the cockpit. They are made in different parts and are only possible to assemble by keeping internal parts of the joints visible, which is unfortunate.

I decided to make a Ju 88C-2 Night fighter based in Gilze-Rijen in the Netherlands. The cockpit of the kit is well detailed and I only needed to make adjustments to install the canon and the guns. A boarding ladder was scratch built and the windscreen was adapted, as these night fighters had no machine gun installed in the windscreen. The fit of the CMK conversion kit is fairly well and only some putty had to be used and some panel lines rescribed. I flattened the tires (see my article “How to Make Weighted Wheels”) and the wheel chocks were scratch built. 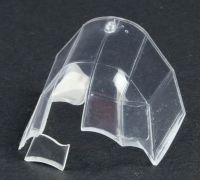 The model was placed on a simple base with a barrel and a toolbox to add some colour.

I used paints from Humbrol, ModelMaster, Vallejo and Model Air. 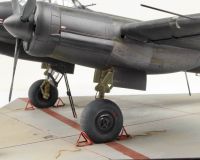 For questions, comments or remarks go to: https://lucjanssen32nd.com/.