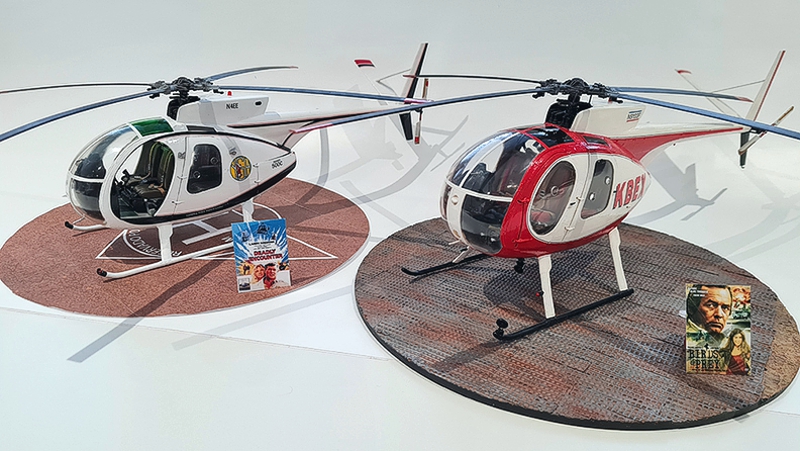 "Birds of Prey" and "Deadly Encounter"

Seeing the excellent Nichimo Hughes 500 by John Everett site has inspired me to send in images of two Nichimo Hughes 500’s made by myself some years ago. Having never seen these two classic choppers modelled before, I am hoping others may be encouraged to have a go themselves. At the time of making these models my modelling skills were more limited than today, I had no airbrush and no real knowledge of washes and weathering techniques etc.

A self-confessed helicopter fan, my inspiration was the two great helicopter chase films “Birds of Prey” with the great David Janssen and of course “Deadly Encounter” with the late Larry Hagman. 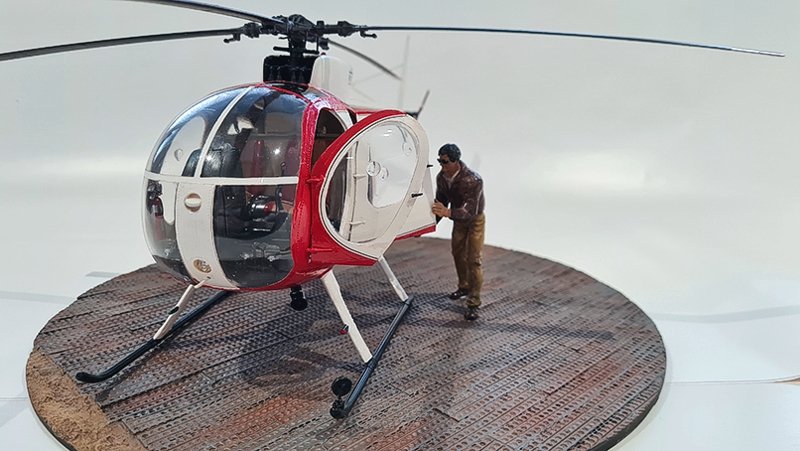 The decals for both models were drawn by myself using Adobe illustrator and printed on decal paper and sealed with clear coat.

The “Birds of Prey” model was painted inside to match the real machine as best as possible from watching the film numerous times and making notes. I was lucky enough to have an original VHS copy of the film. I made the thin black line on the helicopter next to a thicker (2mm) red line. Having placed the decal in the right position I then painted the rest of the red up to the edge of the red line. I used a resin and silicon mould to copy the four landing legs then added a section of these to the original parts to increase the length of the legs giving the appearance of a high skid version as in the film. The pilot figure of Harry Walker was I think from a 1:20 mechanic set or similar. The base is from ZOUKEI MURA and was used for the photos only as the models are normally both displayed in a glass case. 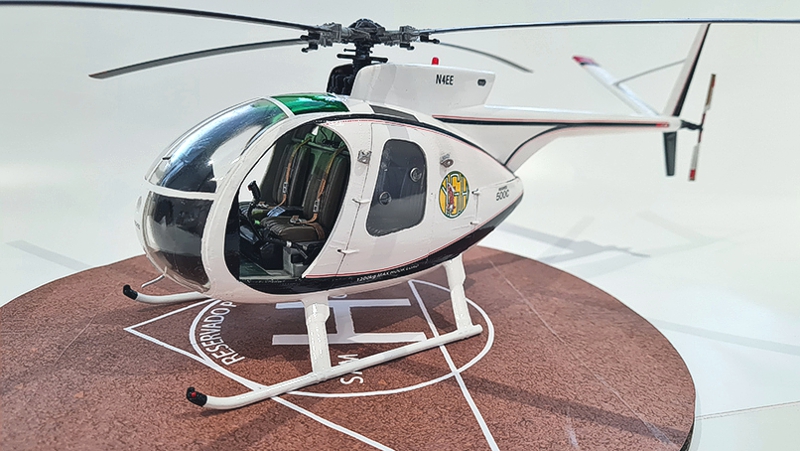 The “Deadly Encounter” helicopter started out for many years as the Japanese version on the box. It was probably about 7 years ago that I changed it to the Deadly Encounter version. I had to over paint the whole model white as unfortunately I could not remove the original decals. The inside colour scheme remains as it was previously. The new decals were created and laid on top of the white having clear sealed the white first. I remember having more trouble with the fit of the decal on this version. When drawing them in a flat 2d perspective it is then difficult when trying to fit them accurately around a 3d object. I dry fitted the main black tear drop shape with thin red line numerous times before eventually going with the one I used. It is not perfect but a good representation. I went down the decal route for the models because I knew I could not reproduce such thin lines with paint. I also at the time changed the front of both skids to include the navigation lights.

The helipad for this model was again produced in Adobe Illustrator as a copy of the one seen in the film and simply printed out onto paper for the photos.