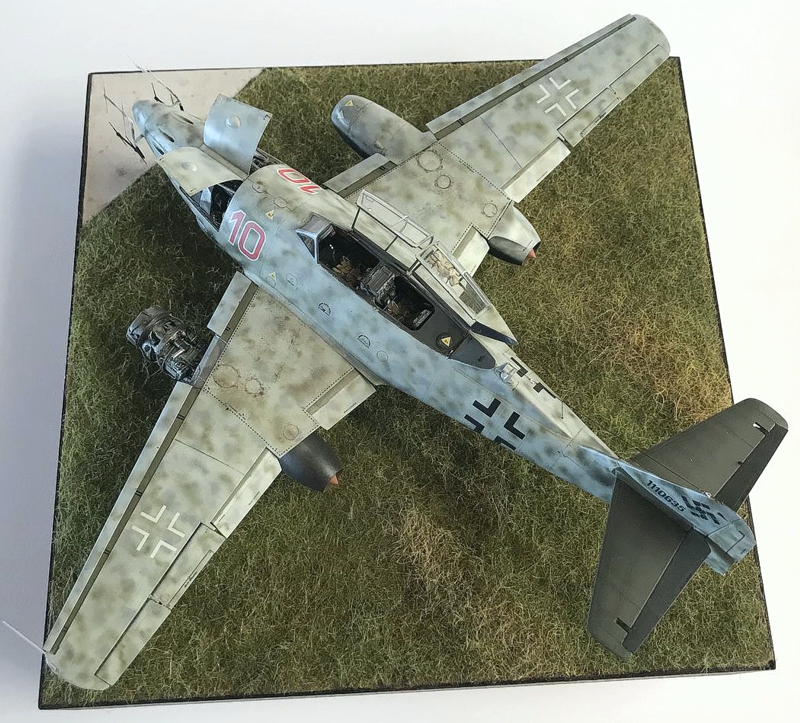 After having built the Trumpeter single seater and not being satisfied by it at all, I wanted to try the Revell night fighter version. I started it in January and completed it in March, a very short time by my standards.

I was attracted by ‘Red 11’, but being unable to find any reference on it, and wanting a full mottled pattern, also on the wing, I elected the ‘Red 10’, of which there is some relatively good photographic documentation.

I think that the Revell kit has the best value for the money. The detail is a little less sharp, and it doesn’t have the full rivet detail the Trumpeter kit has, which is a little heavy, in my opinion. You may choose to have these or not, or to engrave only the fuselage and the underwing.

I found the canopies marred by some little bubbles, but I wrote to the customer care address, and received in a few days a good replacement. 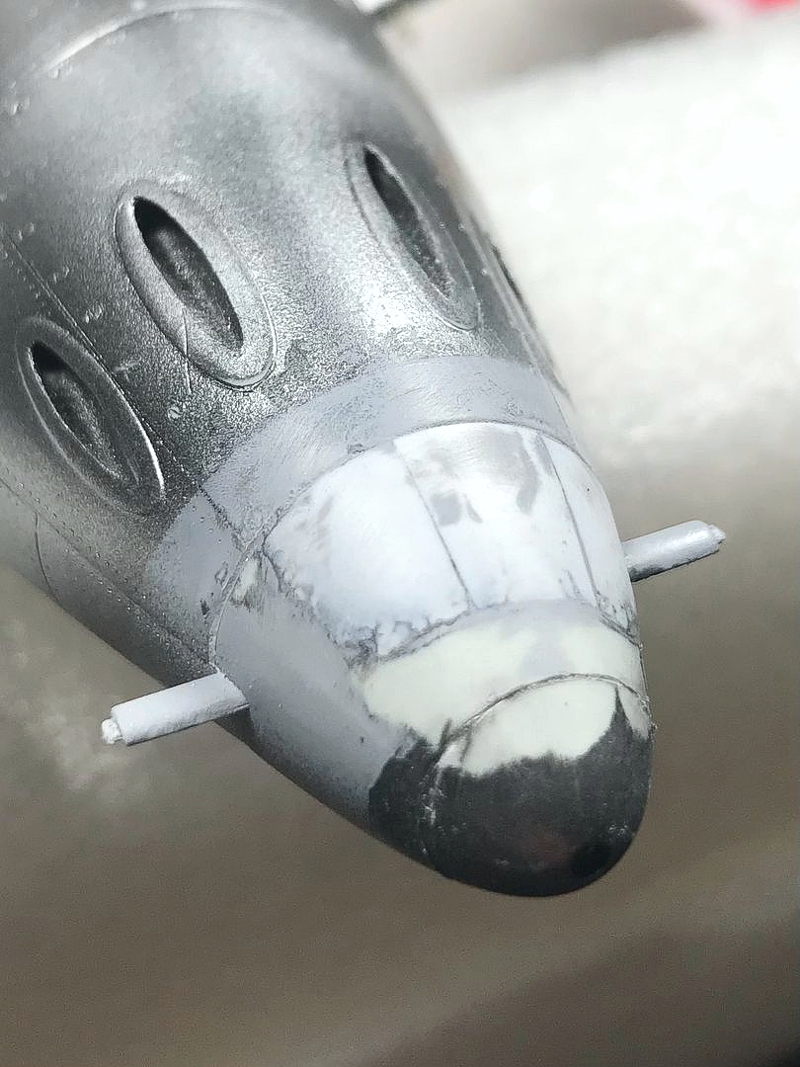 The general fit is excellent except the nose cone and there are some issues persuading the wing to join the fuselage.

On the other hand, the Revell kit has a really nice (and sturdy) landing gear assembly; I liked it very much. The wheels need to be exchanged with resin ones, but this is a common problem, there is the same issue with the Trumpeter vinyl ones. 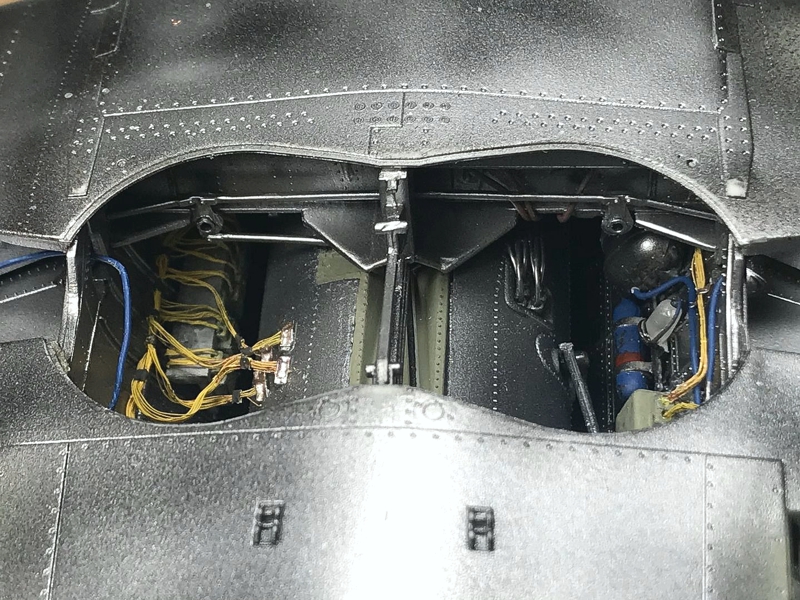 A very good landing gear bay can be improved with just a little ingenuity. 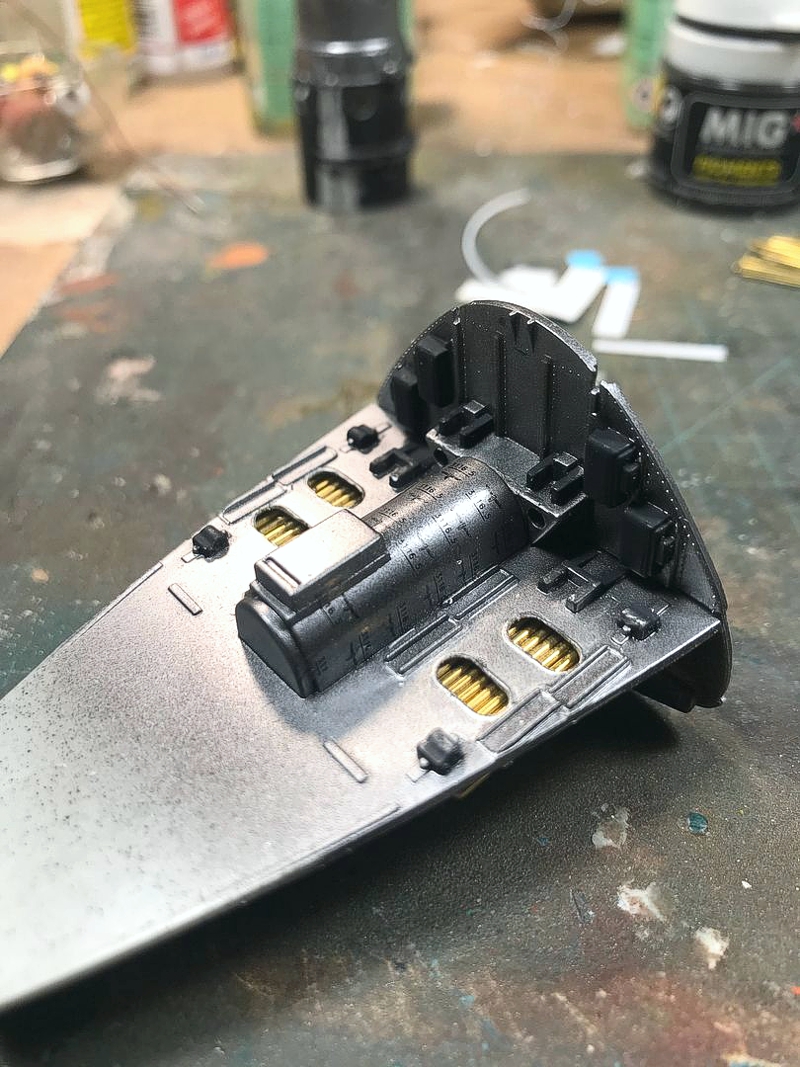 Same for the cannons bay. The overall fit leaves room for some easy improvements, if desired. And adding to it with latches by Yahu is a big boost in detail, with very little effort. 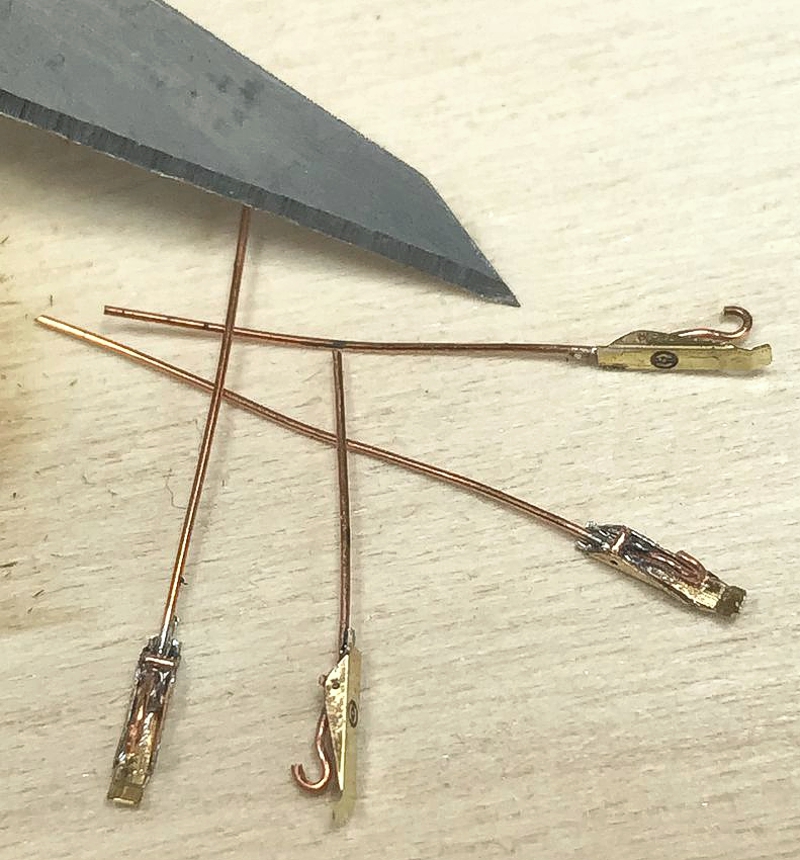 The same goes for the engine, the kit's base is straightforward if you want to close them up, but with an evening of scratch-building, one may achieve a very reasonable exposed Jumo. 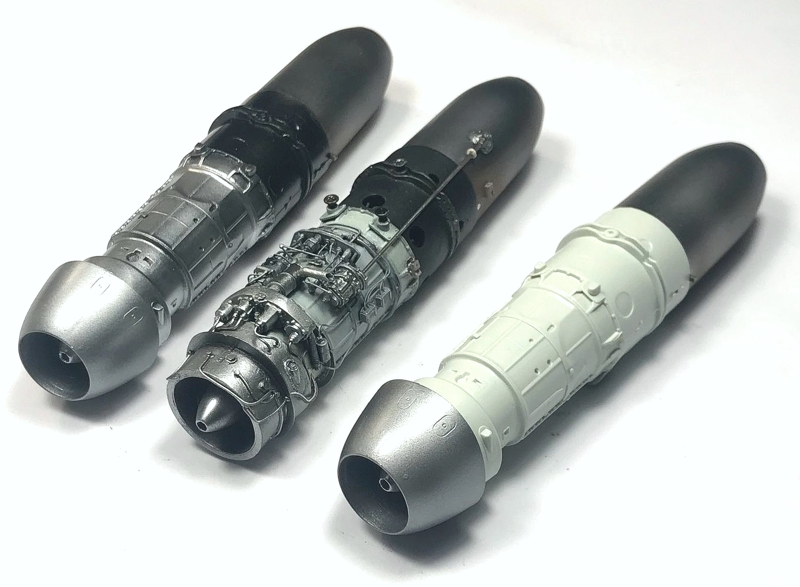 The initial plan was to do an out of the box build, but I was attracted by some areas I found very well represented by Revell, like the cockpit, the cannon bays, and the engines. Therefore, I drilled holes within the clear canopies to insert pins and make them openable. Actually, it wasn't as simple as I said: You see that the aft canopy hasn't a straight bottom surface. Being instead curved, I produced a flexible hinge system that allows the movement fluidly. 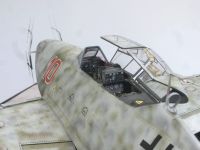 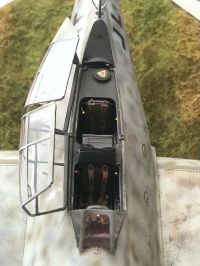 Thinking about the cockpit, I asked myself if it was possible to illuminate the cockpit without too much effort. I found that four yellow/orange-colored nano-LEDs enclosed in aluminum tubes were enough to do that. Here, they can be seen on both cockpit sides. 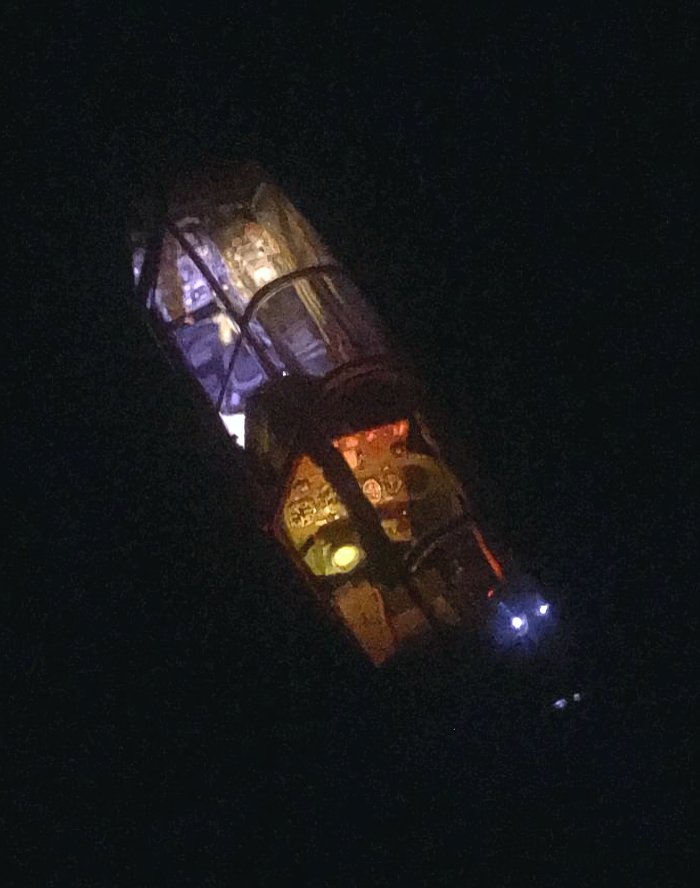 So, here we are by night. Closed… 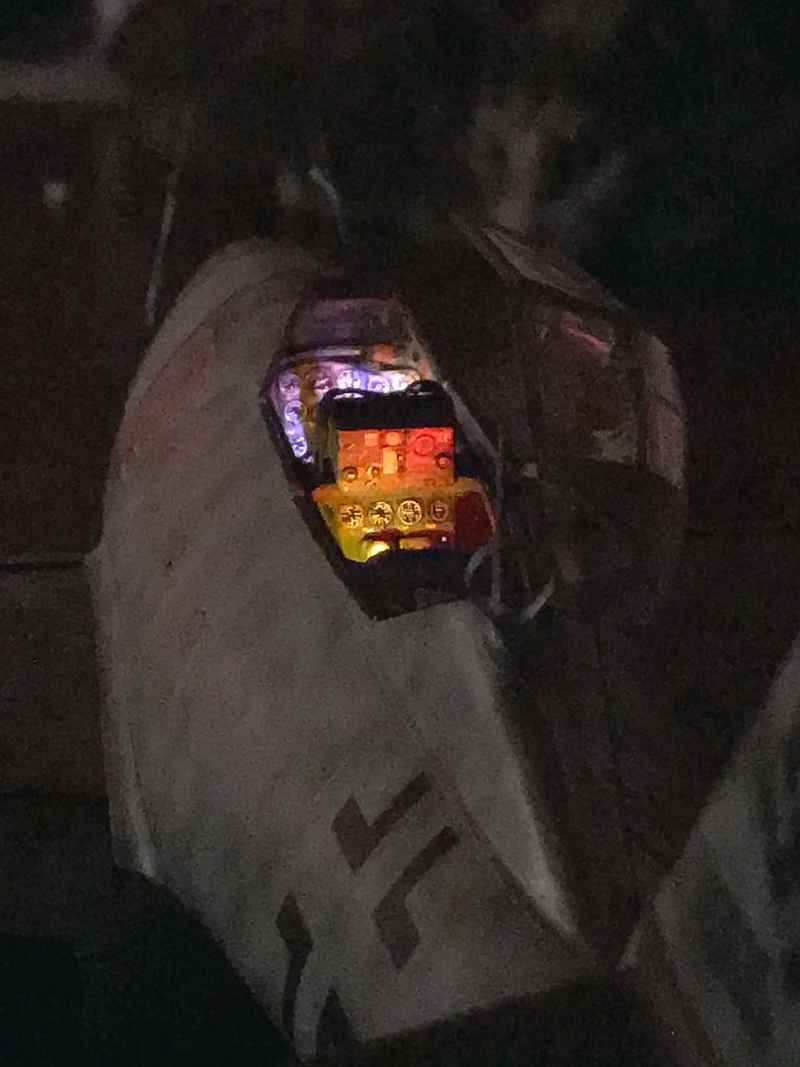 …And opened. In the background, with some imagination, you can see another night hunter with the very same camo: one of my cats! 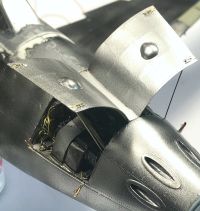 So far it was almost a step-by-step way to build it, but what about cannon bay and engine? I absolutely didn't want to ruin the beautiful lines of this aircraft, so I built some alternative parts to be exchanged at will revealing the interior details, arranging a very positive contact with micro magnets. 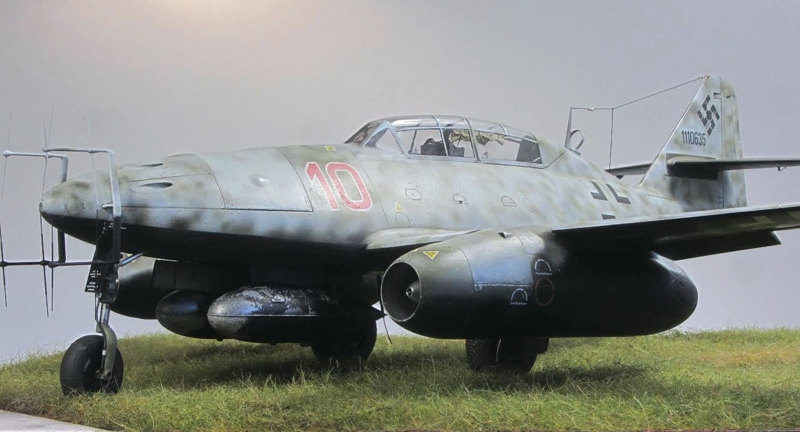 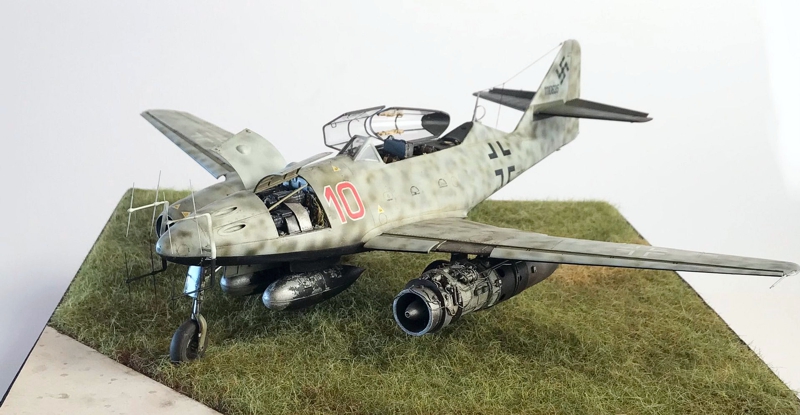 And that's it. This picture does not show some details in the cannons bay, like the rods that support the opened panels and opened latches, I forgot to display these when I shot the pictures.

I discovered the beautiful work made by Thunnus on the very same subject just a few days ago, too late to take advantage of that Work in Progress. If I knew that before, I would have done the same correction to the tail navigation light, or I'd have less headache to position the flaps extended, just to mention a couple of the many tips I found there.

In conclusion, I fell in love with this kit. I really enjoyed the time I spent on it! I think the single seater will be a breeze to build and be a lot of fun. So maybe this is a good reason to do another Revell 262...