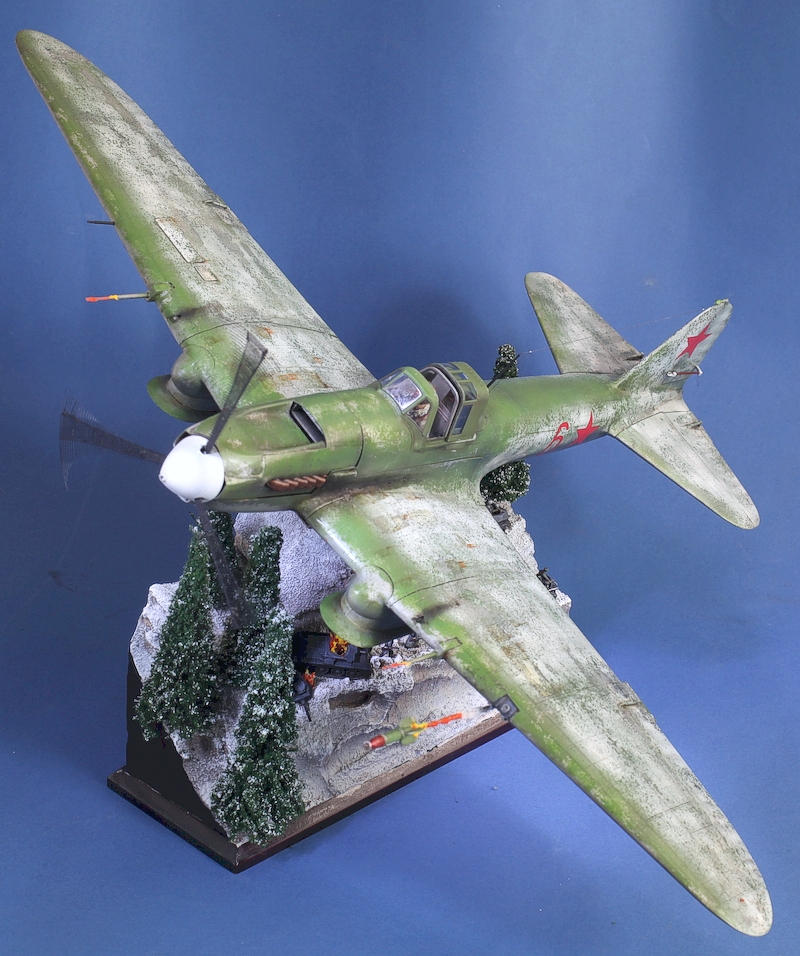 The Ilyushin Il-2 Sturmovik was a ground-attack aircraft produced by the Soviet Union in large numbers during the Second World War. The Il-2 was never given an official name and 'sturmovik' is the generic Russian word meaning ground attack aircraft. During the war, 36,183 units of the Il-2 were produced making it the single most produced military aircraft design in aviation history. To Il-2 pilots, the aircraft was simply the diminutive "Ilyusha". To the soldiers on the ground, it was the "Hunchback", the "Flying Tank" or the "Flying Infantryman". Its post-war NATO reporting name was "Bark". The Il-2 aircraft played a crucial role on the Eastern Front. When factories fell behind on deliveries, Joseph Stalin told the factory managers that the Il-2s were "as essential to the Red Army as air and bread." 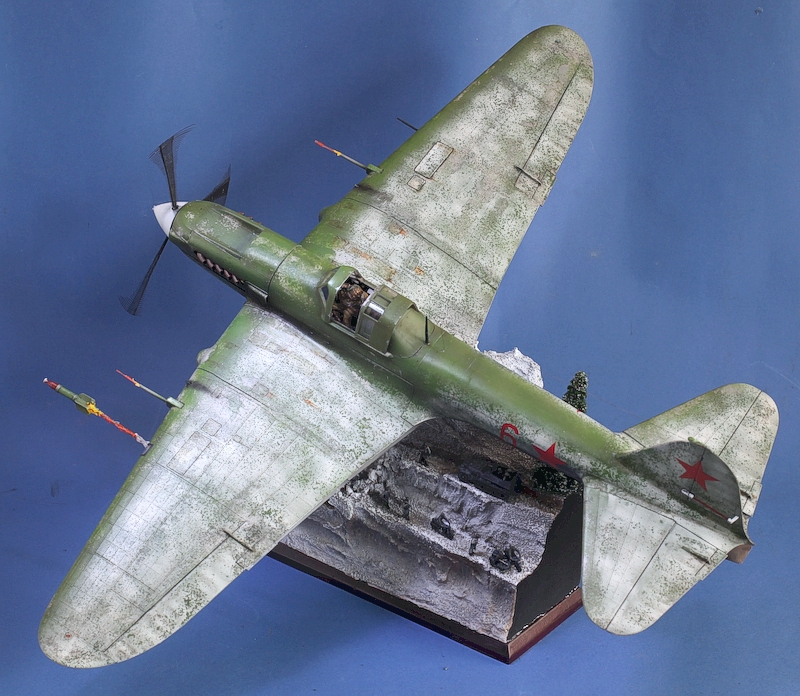 Although there were several variants, they were all called IL-2 (designations like IL2M were western descriptions). They differed in terms of undercarriage, rear gunner, and fuselage construction with more wood used when short of metal. Nevertheless, principal to the construct was the armoured pilots cage which was very effective in protection. The skis were an earlier was implementation and discontinued after 1942 as it was found that the plane could function with wheels on reasonably packed snow. 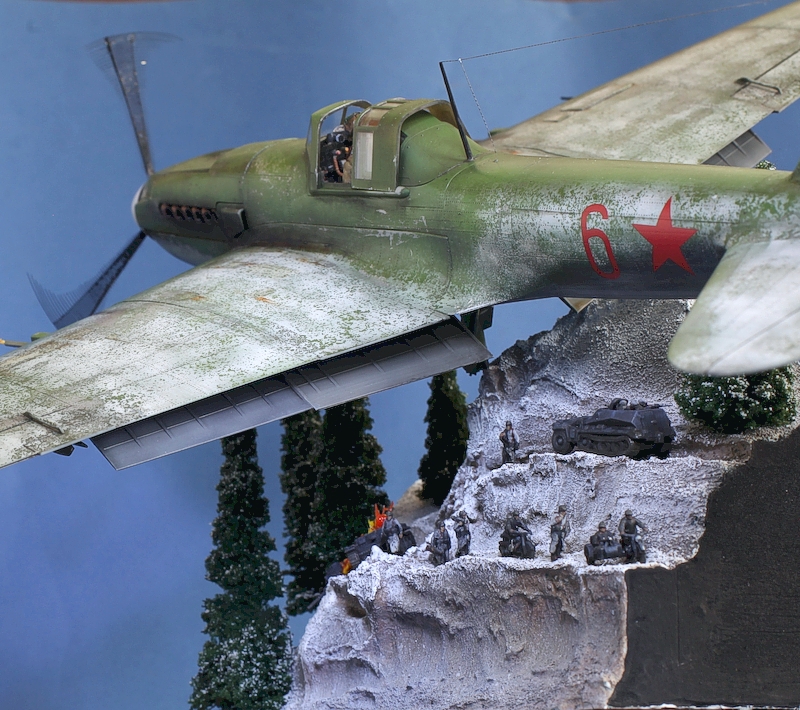 Dioramas of this nature need to be dramatic to be eye-catching. I decided on forced perspectives and action to make the flights, fires and fights believable. I’d used sound and motors in the past but that typically isn’t very effective. Just watch a period documentary and decide for yourself. The main plane the IL-2 Sturmovik would be just pulling away as a bomb was released. In addition, the cannons would be firing, and a rocket deployed. A Panzer 38(T) appropriate for early war had been knocked out from a previous run that caused an avalanche and the rest of the troops are wearily retreating down the mountain pass. IL-2’s employed a closed chain attack formation where they would strafe an armour column and protect the plane in front of them. Not for naught they were called the “Black Death” by German forces. 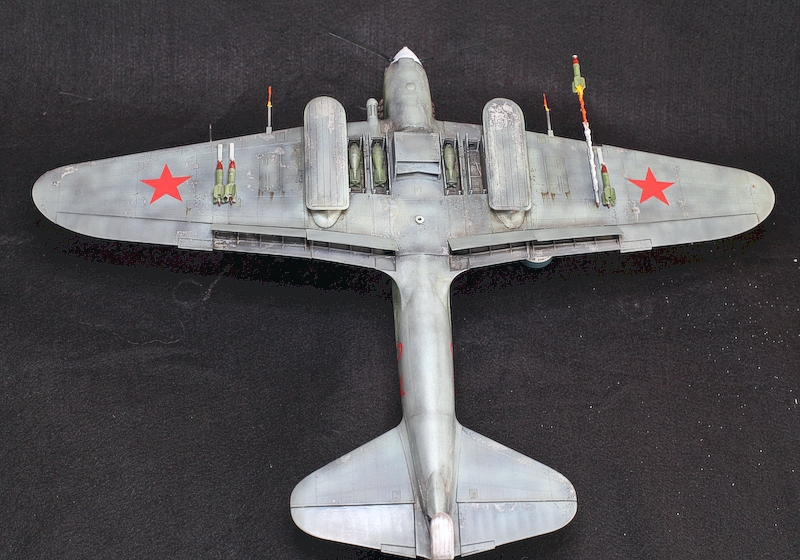 The kit was an easy build. All told it took less than a week to build it. There were no problems pertaining to fit an accuracy. The testiest problem is the transparent cowling cover which tends to crack due to the clear plastic. I hate these see-through parts and most people paint them anyway. The ordnance is ample and redundant at multiple levels (i.e. loads of spares). I turned a thimble to take a piece of hangar wire and installed that on the planes centre of gravity. This lines up nicely on the base centre-of gravity, and the wire could be bent out of view as a cantilever. 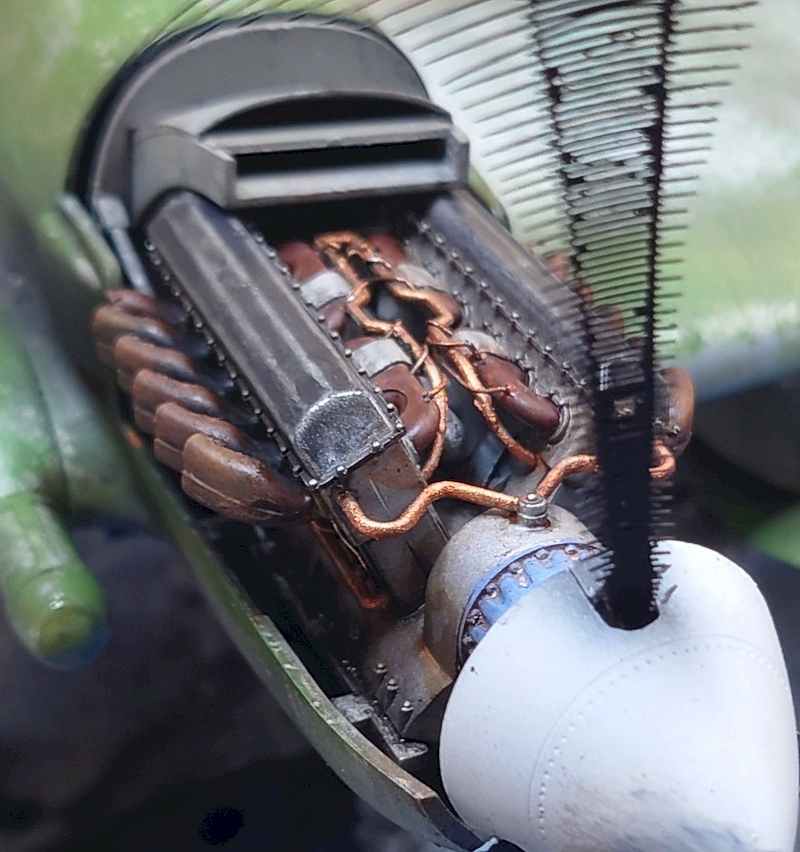 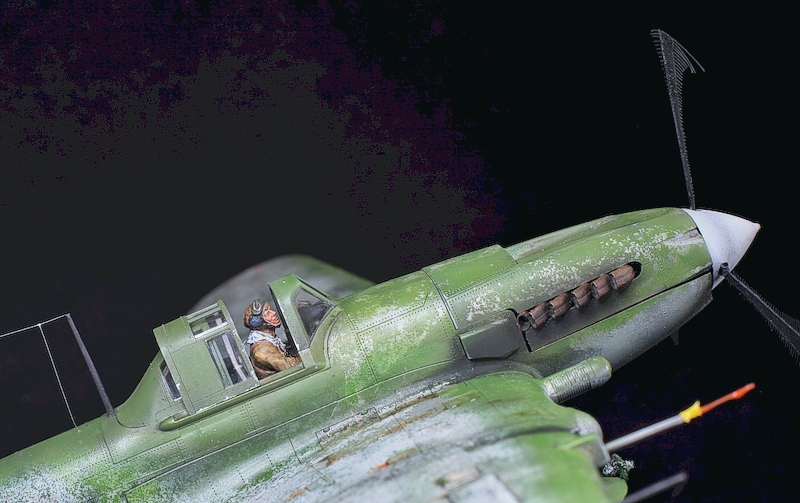 The propellers were from Propblur. This was my first use of the product. It definitely looks the part, but I learned a lot putting them in. They are not available in steel at this scale and brass is fragile. I broke mine many times. I used thin brass struts to re-enforce them and painted them afterwards. This made it slightly blobby. If I would do it again, I would mount the brass rod and paint it while it’s still on the fret. Interior detail weathering was heavy. Basecoat of rust was followed with sand in white glue. Then, thin black paint and the overcoat in light grey with lighter shades of white. All of this was in Humbrol Enamels. When dry I just brushed the sand away. I don’t claim to have invented this technique, but it is described in my multiple articles on this site. The gun and rocket fire were clear plastic sprue coated in tinted silicone sealant as was the fire on the portside. I used references to model the skis up as the option wasn’t described in the instructions. 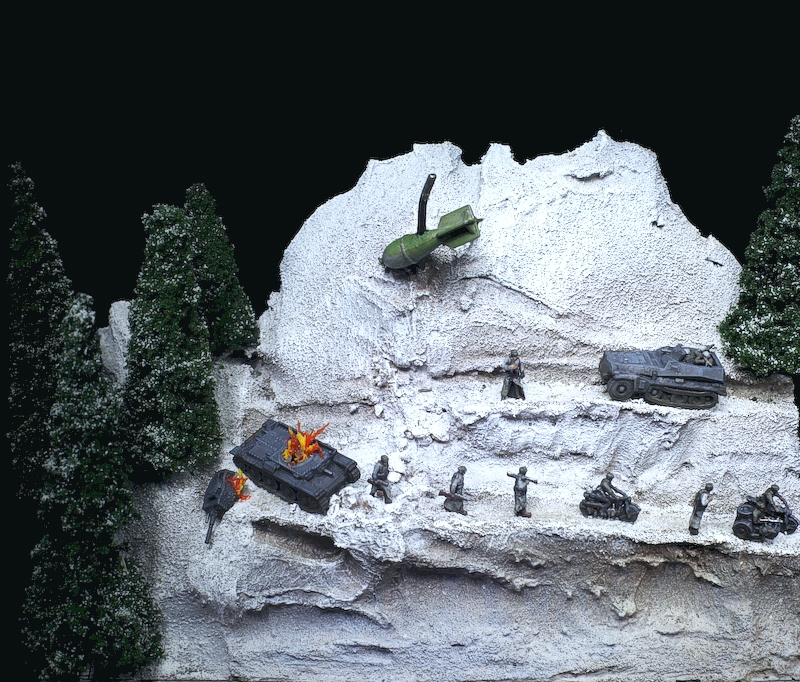 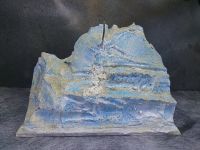 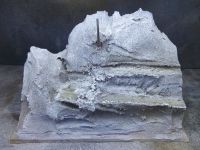 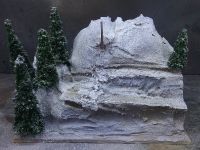 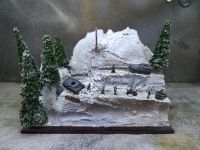 The base is a solid pre-fabricated base from High Planes Models. The mountain range is carved from Styrofoam with sand for texture. The fir trees are come in a set from Woodland Scenics. I used clothes hangar wire in the base that goes through the mountain range and out at its peak in a way that centres the plane on the base. A bomb hides it further so the plane looks impossibly suspended. It s quite stable like this. The 1/144 German figures were actually DAK figures that were modified with winter gear. These all came from an eBay-based company Kamiya that appears to 3D print them upon order. Comparing prices this was the cheapest option on the web but still quite costly. 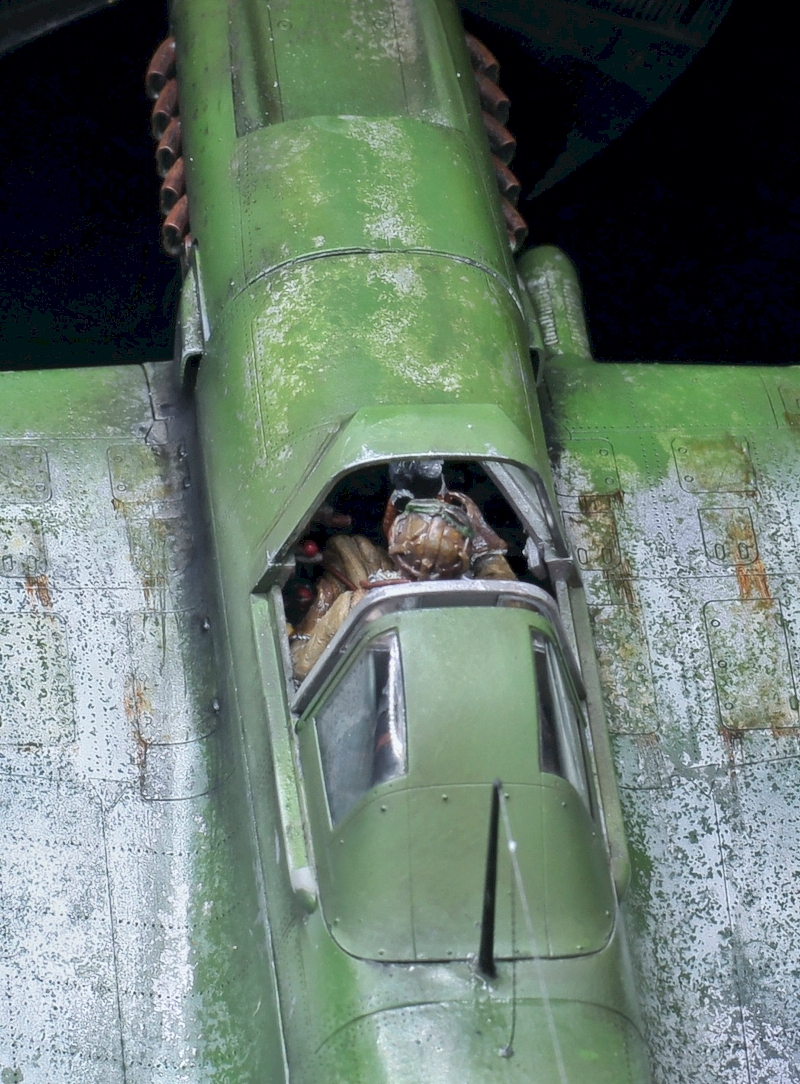 The markings for “Red 6” were provided in the kit. I wanted the paint job to be heavily weathered and so I base coated with silver. Coated with sand in diluted PVA finished off the Humbrol 131 (Russian green). Then more sand and then white. The models were base painted in Humbrol enamels, varnished with Future-Tamiya Flat acrylic, weathered with turpenoids and chipped sparingly. I used oil washes for weathering and drop filters for colour variation. The worn silver was a combination of sponge dabbing, silver pencil and undercoat with black and brush painting silver. I’ve not seen this paint job attempted by anyone effectively and I think the technique does the colour plates and photo references some justice. 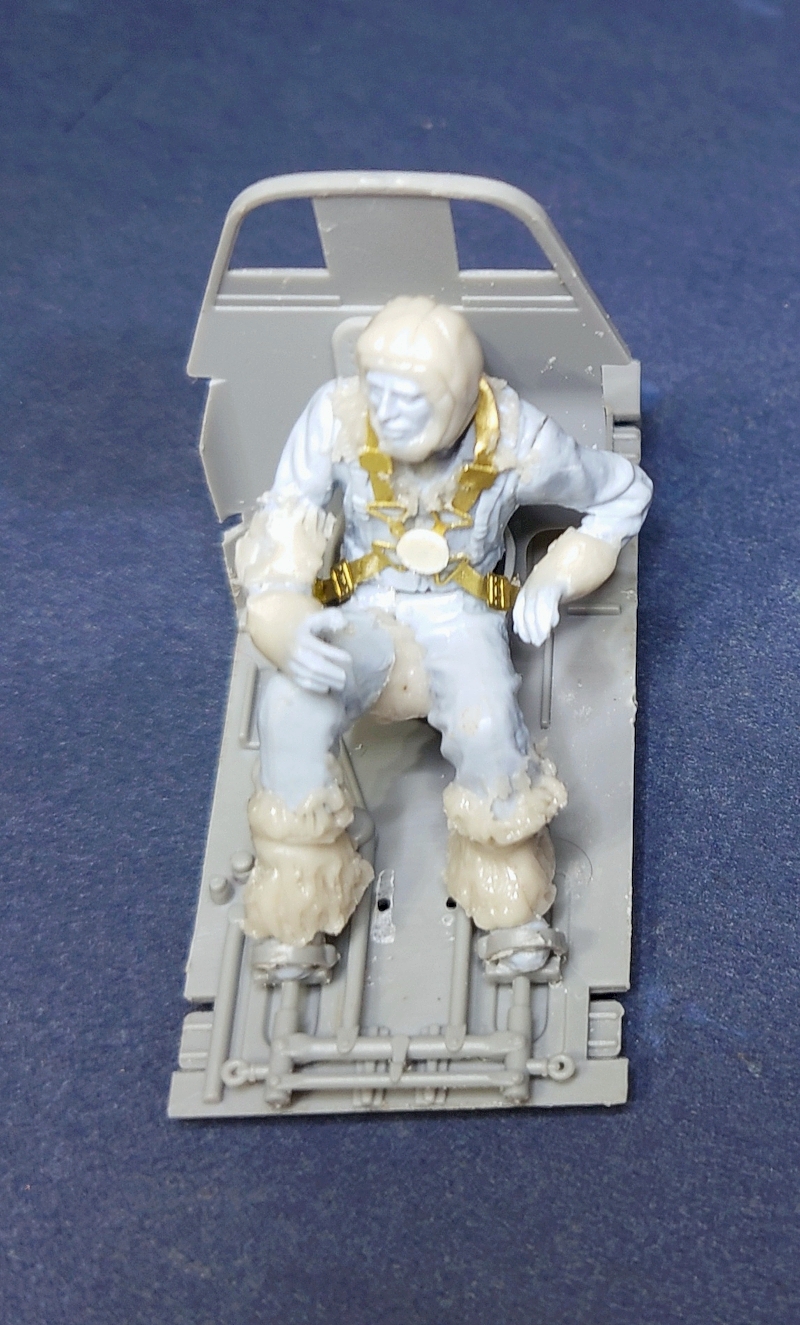 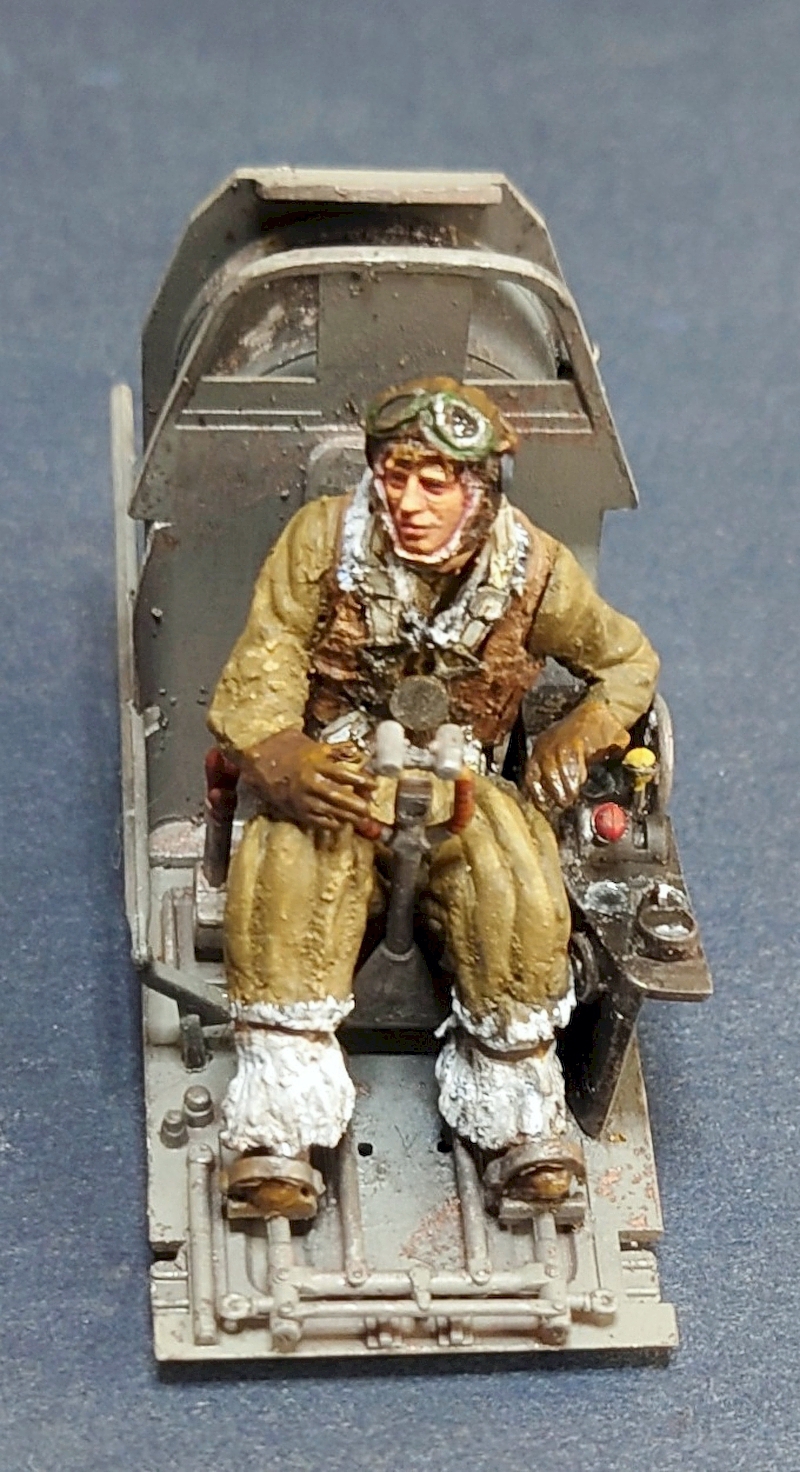 The pilot figure is modified from an Airfix Multipose American Marine in 1/32. I use Easy Sculpt for the details that show a pilot in Arctic gear. 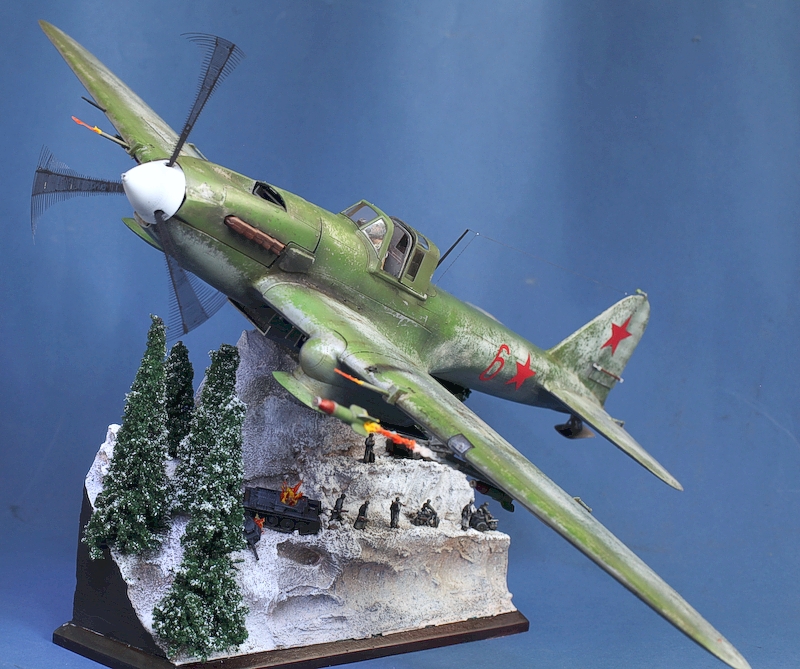 The IL-2 does not receive enough attention as a modelling subject in my opinion. I must say that doing a plane in flight captures something of the character of a plane that is often lost in more usual static grounded subjects. 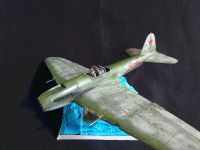