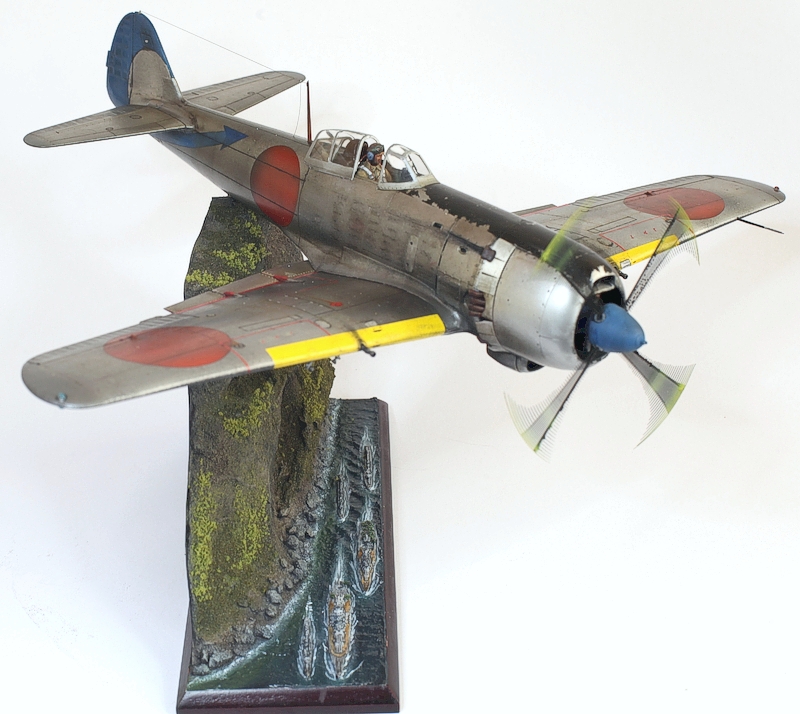 Flight of the IJN Yamato 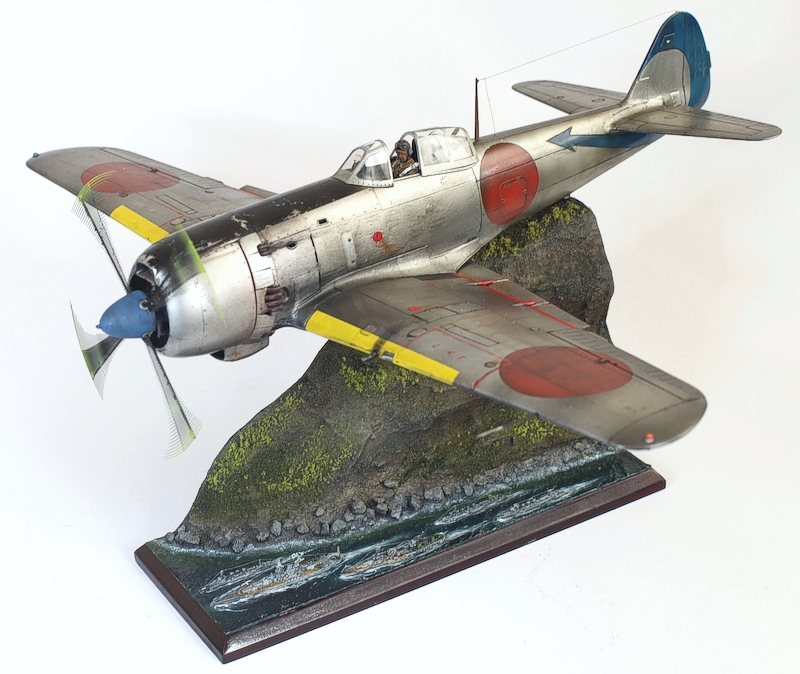 Following my series of dioramas featuring the sinking of famous battleships this diorama was going to be more peaceful. Unlike the portrayals of the other three (Sinking of the Bismark , Turning point, Midway and Sinking of the Musashi) I decided on a twist in my usual format of ship sinking dioramas. In the wake of the Battle of Leyte gulf and the sinking of the Musashi, the IJN Yamato was forced into a strategic retreat back to Japan for needed repairs.

On 16 November Yamato, in company with Nagato, Kongo, the light cruiser Yahagi and destroyers, sailed from Brunei Bay for Japan, but en route the task force was ambushed by the American submarine Sealion. At 3:00am on 21 November, in the Formosa Strait, the American submarine fired first the six bow tubes, and after turning, the four stern tubes at the IJN task force. Three or four torpedoes struck Kongo and one hit a destroyer, which sank immediately. Kongo sheered out of line and took on a severe list; she eventually sank at about 5:30am, just north of Formosa. Yamato and the rest of the task force safely reached Japan, entering the Kure Navy Yard on 23 November 1944. 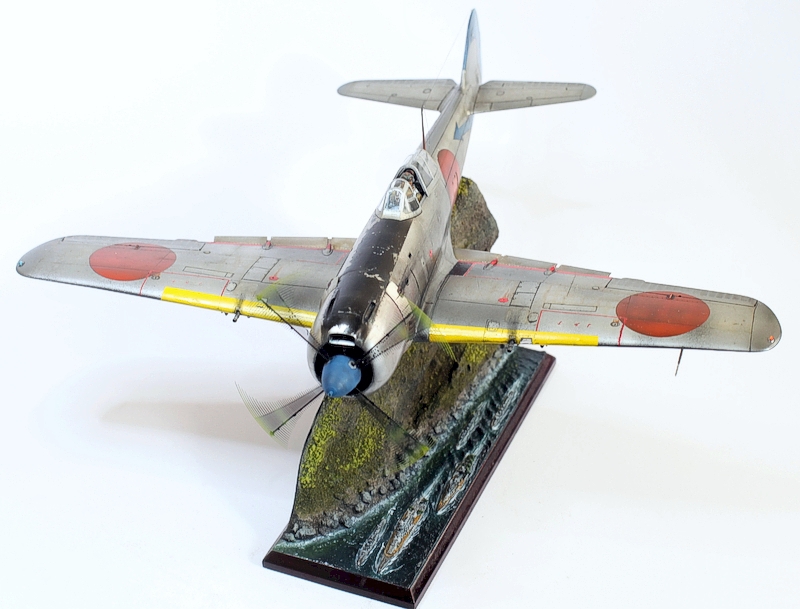 Many planes just look better in flight. Standard stands I feel take something away from the illusion of flight and suspension wires and strings are impractical for transport and don’t let you see the most attractive upper surface of the plane. I generally like to hide the suspension point and in this case that would be a mountain top. I decided on forced perspectives and action to make the flight believable. I’d used sound and motors in the past but that typically isn’t very effective. Just watch a period documentary and decide for yourself. The Hasegawa Ki84 would be in prop-blurred flight as it provided cover for the retreating Japanese Navy in the Straits of Formosa. At this scale, the Yamato would have to be tiny. 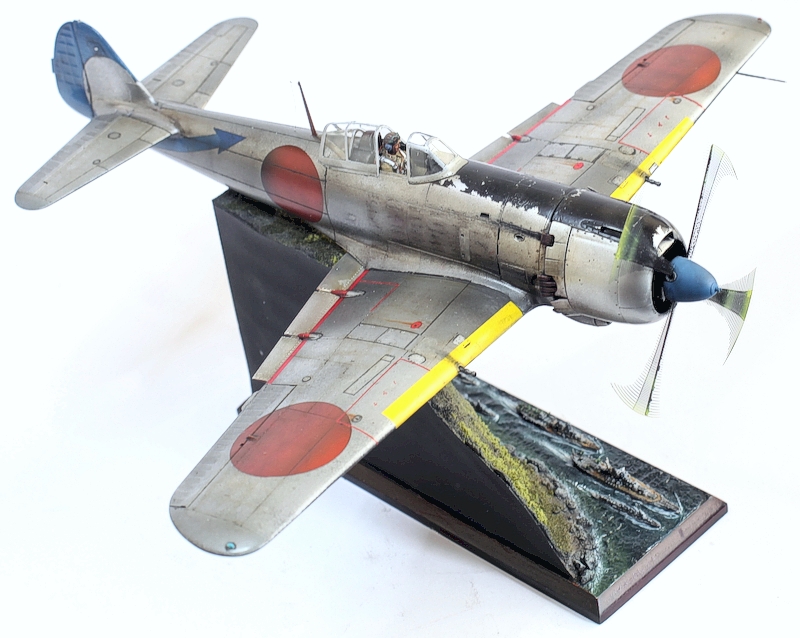 The kit was an easy build. All told it took less than a week to build it. There were no problems pertaining to fit an accuracy. The testiest problem is the engine detail and pilot figure. The ordnance is scanty and perhaps irrelevant for the squadron I was to build. This is the hombu sentai, 29th sentai, Formosa (Taiwan), Summer, 1945. 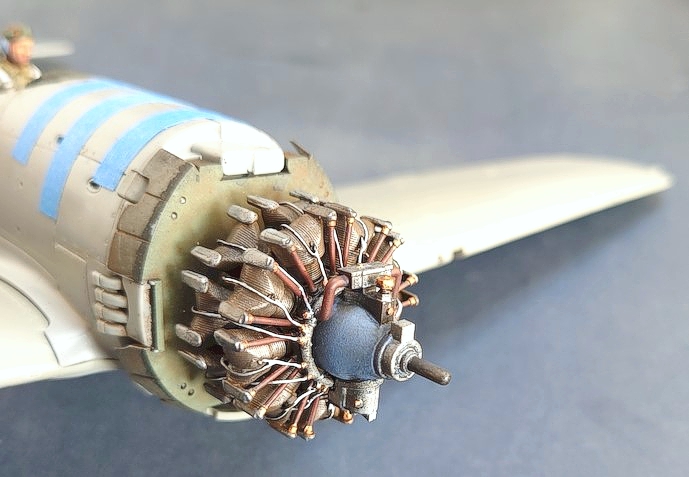 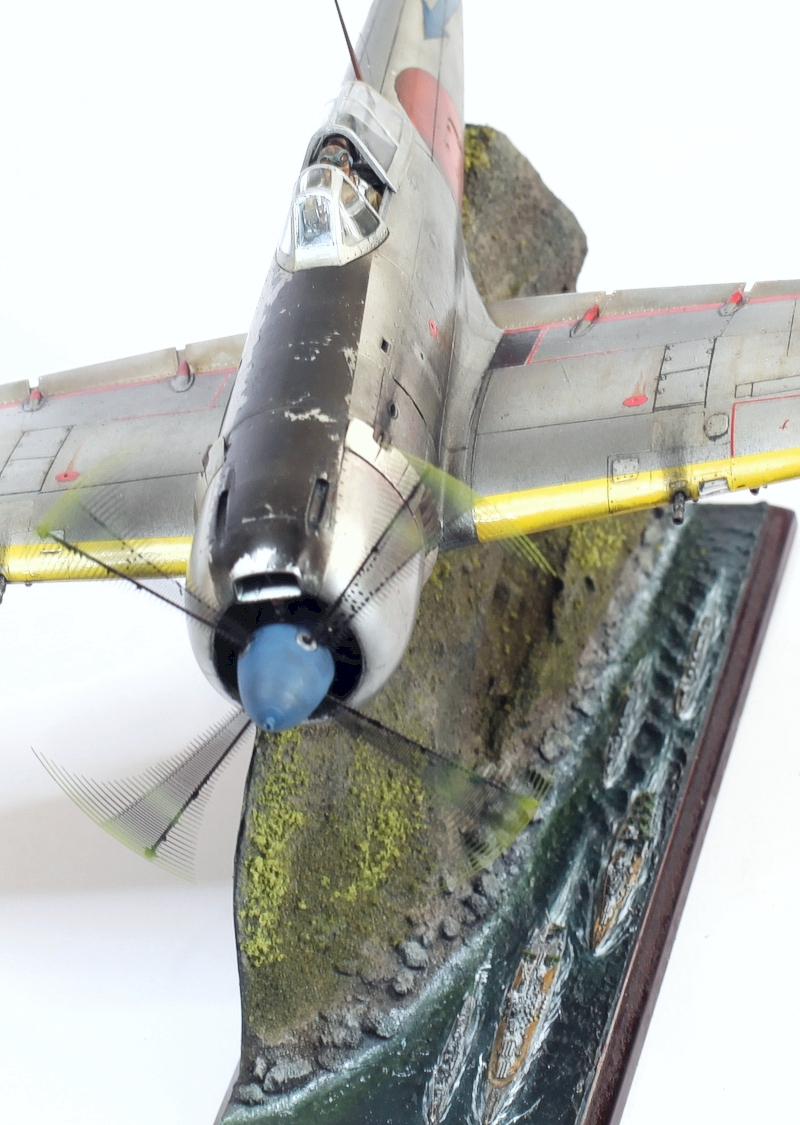 Scratchbuilding was minimal in the engine. It’s a beautiful depiction of the 1800-hp Nakajima Ha-45 engine and includes the pushrods. The ignition harness was solder-wire. I contemplated rebuilding the engine but decided against it and it isn’t detailed enough to show without the cowling. The propellers were brass etchings from propblur.com. Learning from past mistakes I now glue a thin length of piano wire to the back first on the fret. Then spray paint and finally cut it out to length when I’m ready to mount it. Otherwise, it can be fragile and breaks easily. 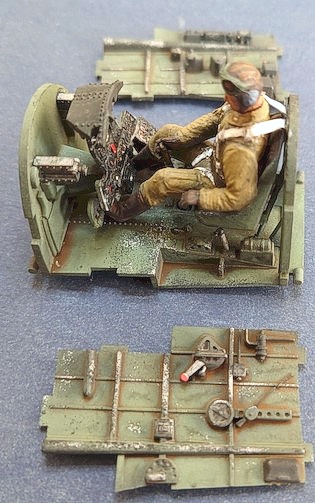 A short note about the instrument panel which was painted in gloss black and had a decal over it with setting fluid. Interior detail weathering was heavy. Basecoat of rust was followed with sand in white glue. Then, thin black paint and the overcoat in interior light green with lighter shades of white. All of this was in Humbrol Enamels. The figure was glued in place and painted with the rest of the cockpit. It is tempting to do this separately, but I often find that you must reposition a lot when its painted separately and so increasingly I paint it on the seat holding the control stick for these projects in flight. 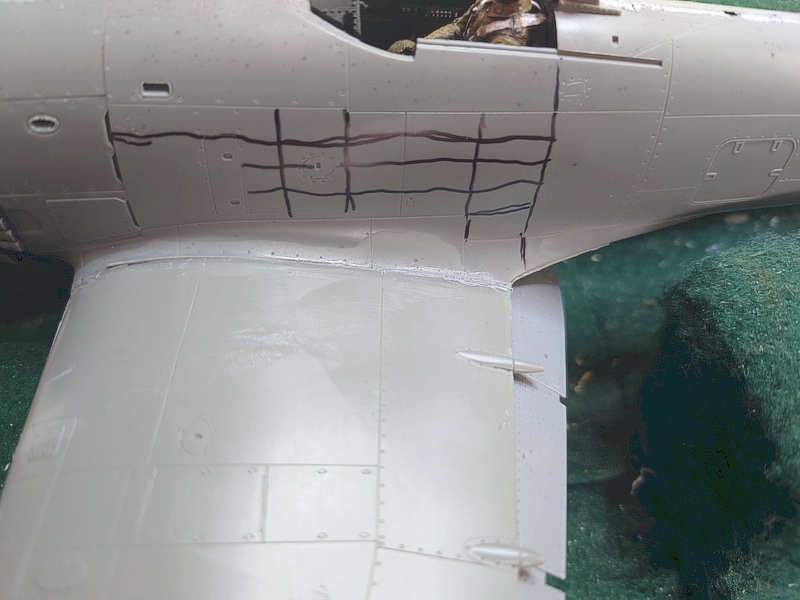 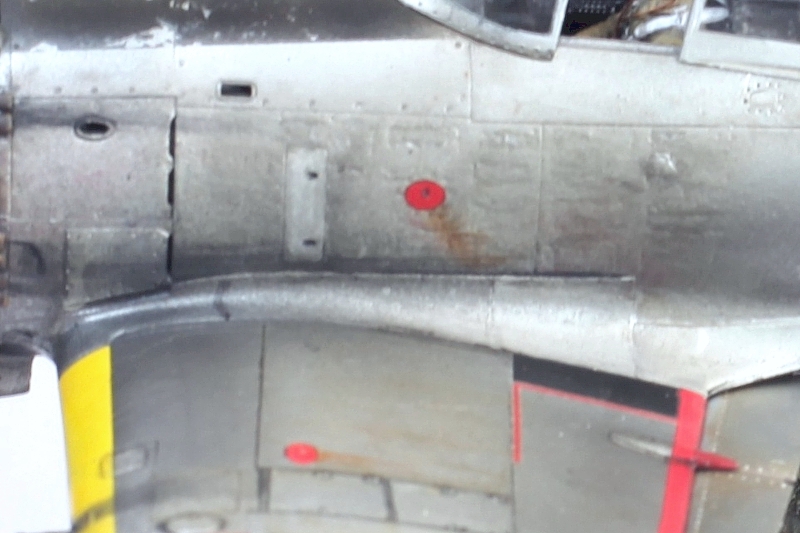 Stressed natural metal finish was achieved on the forward fuselage with a round diamond burr carefully forming the metal deformity with reference to period pictures. On the wings I used paint.

The base is a solid pre-fabricated base from High Planes Models. The seascape is acrylic paste with dark sea green paint. The ships are from Shapeways with the Yamato leading the pack. There is fine wire for the rigging. A metal rod comes up at the point of contact with the mountain top where I place a thimble in the fuselage of the plane. The thimble is turned on a lathe. The plane is well-balanced like a cantilever. 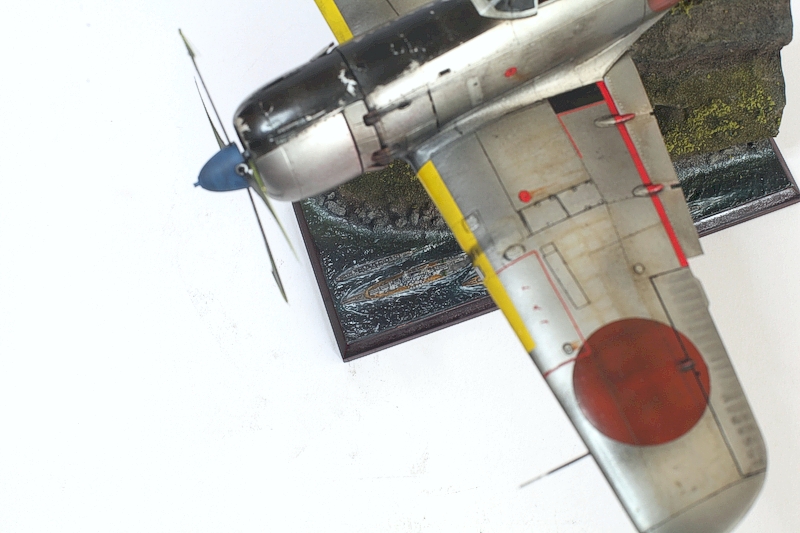 The markings for hombu sentai, 29th sentai, Formosa (Taiwan), Summer, 1945 were not provided in the kit and was hand-painted. There is some disagreement whether this plane was in grey or natural metal. I elected for the latter. I used the Alclad II system. This required the use of their own lacquer black base but I used a generic lacquer black. Unfortunately, this did not stick down and lifted off with subsequent panel masking. This happened frequently enough that the whole plane had to be stripped out and re-done. Hasegawa have scale-appropriate panel markings and even with the best coats can become obscured. After stripping many of these markings were removed and had to be re-scribed. This time I pre-marked all the decal areas with Tamiya enamels and masked over them. Then came Alclad II black lacquer primer and aluminium base coat. I went with multiple symmetrical shades of silver. In the past I would hard mask these panels but this time I wanted a more organic freehand look. I think it brings a different look to natural metal finishes. It was sealed with Alclad aqueous sealer then given an enamel wash and re-scribed with further washes. Final weathering was done with pastels and the model mounted. 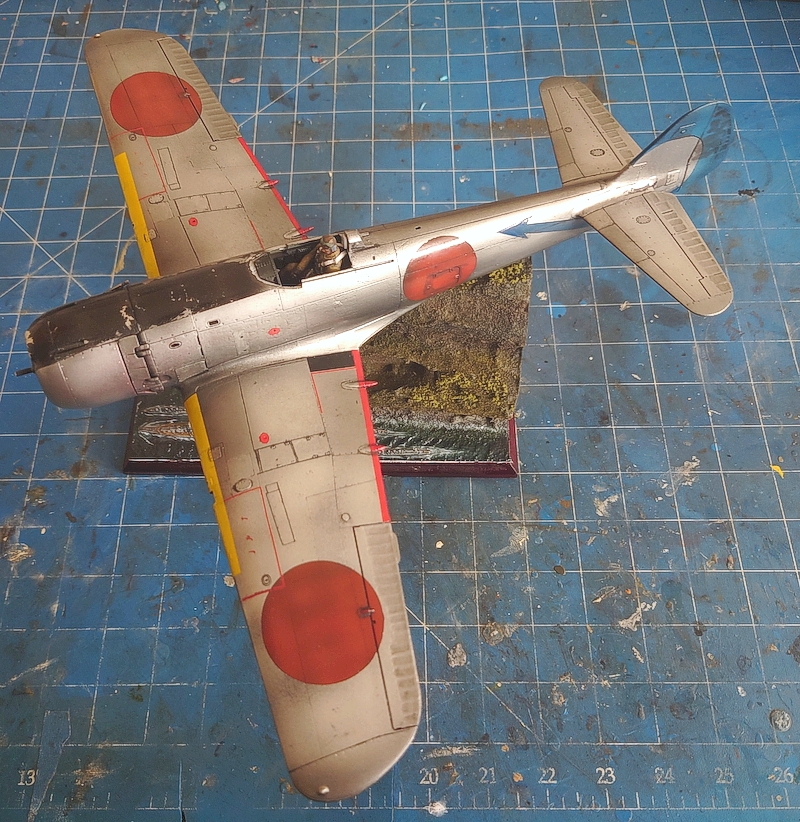 The figure is from Hasegawa. It isn’t very well made but passable with acrylic paints as in this case. It was detailed with lead foil seatbelts, solder wire lines and hoses. 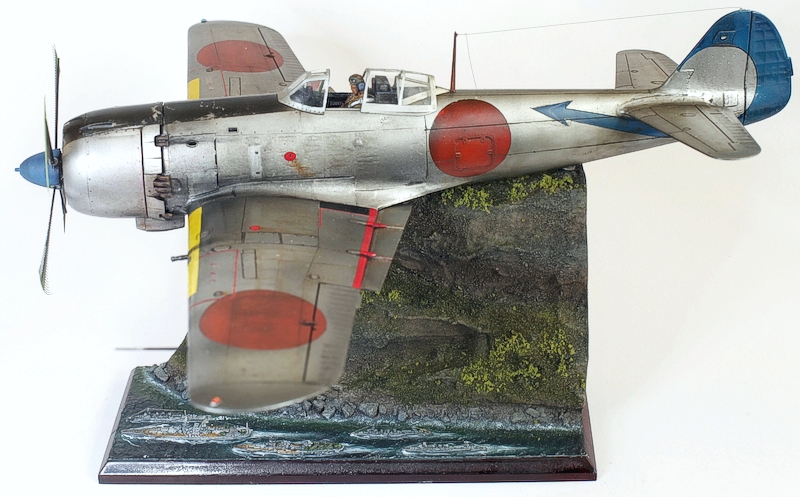 This fourth instalment carries an interesting story of the escape of Yamato following the battle at Leyte Gulf. 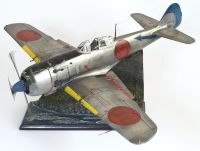 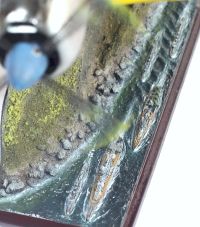