Thanks to Vasko Barbic of Warbirds, the spitfire bug has got to me and I could not resist the urge to build some more of these graceful fighters. The latest three models all have a Malta connection as will be seen later on in the historical background I shall be providing. Once again, the Hasegawa and the Revell Seafire Mk1 kits were used to complete these conversions. The two Hasegawa kits were converted to VC's whilst the Revell kit was converted to a MkIX. Since I have already superdetailed a Spitfire and opened up all that can be opened, I decided to keep this project relatively simple with no gun bays opened and no engines exposed. This has already been done and repeating it would be a waste of life since there are so many projects lined up and time is so limited. I therefore just decided to detail what shows and drop the flaps on the IX since this is the way the real aircraft is exhibited in the Malta Aviation Museum.

The following accessories were used during the building: 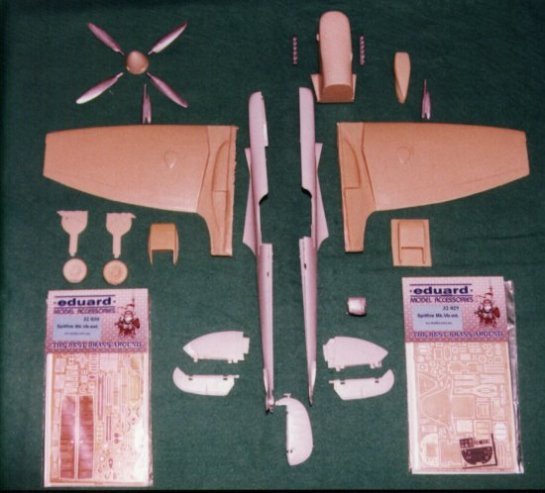 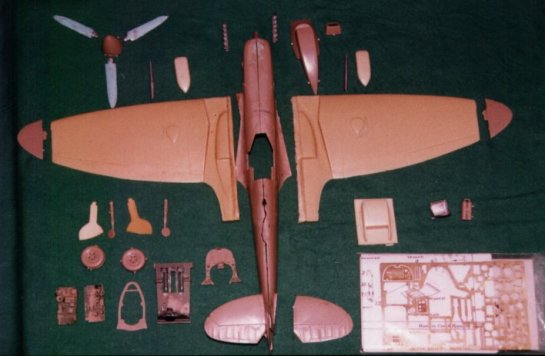 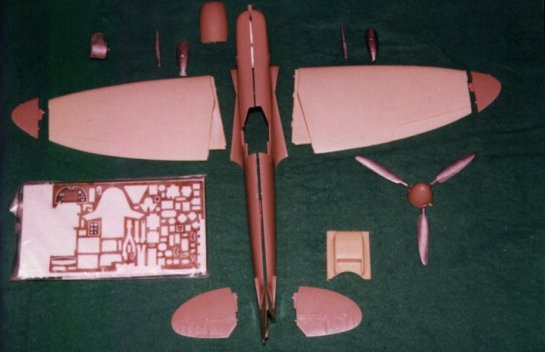 Eduard photoetched sets were used when detailing the cockpits. The Revell model has a very sparse and inaccurate interior, which was totally scrapped. The Hasegawa cockpit floor was modified and then copied to use in the Revell model. This time round I was careful to detail just the things that show through the canopy and no more. I normally fall for this trap whenever I build a new aircraft since I play it safe not knowing exactly what shows and what doesn't. However, since these are my second set of Spitfires, I was now careful to detail just enough.

The Eduard and kit seats are grossly oversized and these were replaced with Vasko's white metal offerings. The Hasegawa control columns were used (I found a spare) but were modified as required. Fresh details were included on the fuselage sides, which include a mixture of scratchbuilt and photoetched parts. The frames supplied with the Hasegawa kit were duplicated for the Revell model. Seat belts were made from masking tape and photoetched buckles and other fittings.

The cockpits were put together as were all details on the corresponding fuselage sides and everything was painted.

Now started the fun work. The Revell kit to be converted to the MkIX was cut up so that only part of the fuselage, the tailplanes and wing tips were actually used. The whole nose section was cut off and the resin part glued in place. This fitted quite well and only sanding and minor filling was necessary for a good join. The centre section on the underside was also removed since this was integrated with the resin wings.

As for the VC and VC Trop., the fuselage was left intact. In all three cases, the tailplanes were fitted in place after removing the rudder and elevators for eventual repositioning.

The resin wings were cleaned up, rescribed and sanded down. In the case of the MkIX, resin was scraped off from the flaps' area since these are depicted in the lowered position. The excellent resin from Warbirds allows one to remove a large amount of material and be left with a paper-thin skinning forming the top wing surface. The Eduard photo etched detailed parts were then glued on. A tricky area to detail is the wing to fuselage joint when the flaps are lowered since this follows a curved contour. This was closed up with thin plasticard and filler. The air intake and radiators went on next. The area immediately behind the radiators is sloped inwards and the insulated pipes leading to the gun bays installed. The extra empty shell hole was closed up and the cannons installed. Last to go on were the topside bulges. 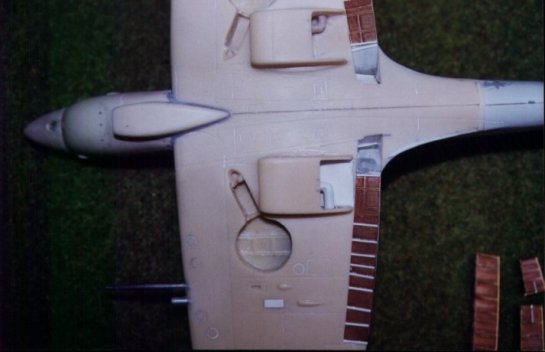 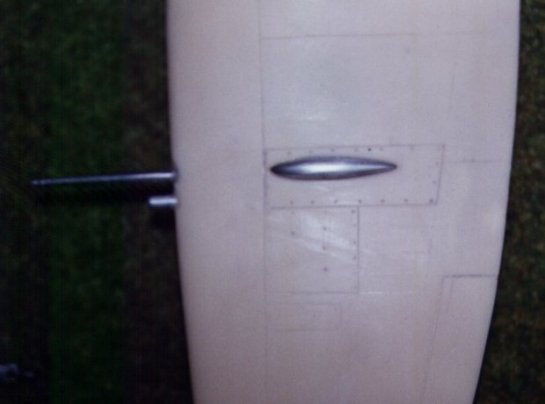 The wings on the MkVC Trop also came with a centre section but required and plastic strip to fill the resultant gap. The radiator was fitted on in the same manner detailed above. The oil cooler was scratchbuilt from aluminium sheet, aluminium tubing and filler. The white metal guns were fitted on and heating pipes installed in at the rear of the radiator. The gun bay bulges were fitted on the wing topsides. Note here that this aircraft had the squarer type bulges and not the rounded ones. These show up clearly in the reference photos. 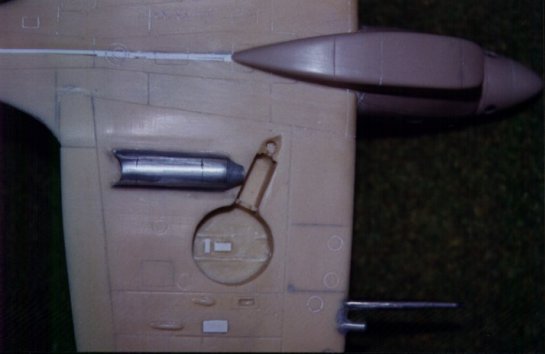 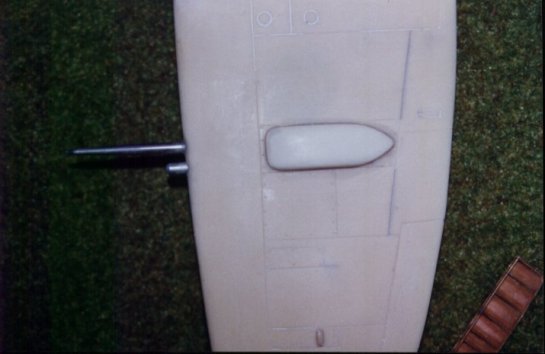 The same procedure was repeated for the VC. However, these wings did not come with the complete centre section and the kit part has to be utilised. This is cut off from the wings bottom part of the Hasegawa kit and glued in place. The wings then fit nicely onto this part and to the fuselage. The same treatment with the wing accessories was repeated with the difference here that the wing bulges are of the rounded type. 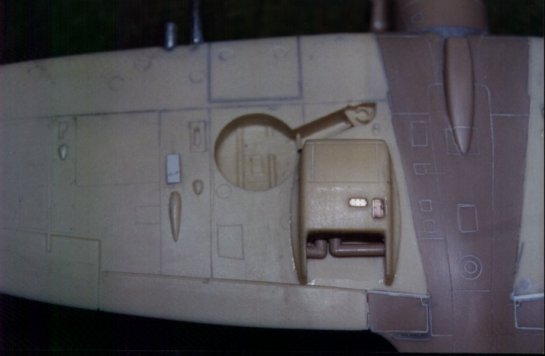 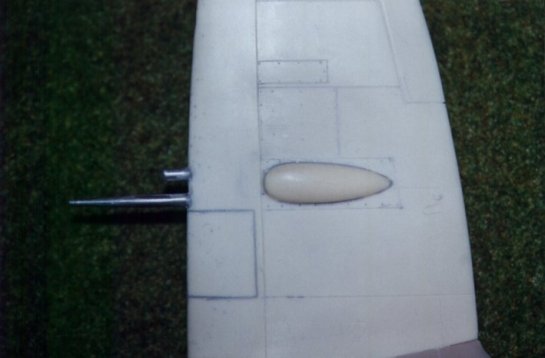 The Revell canopy was not used. The Hasegawa rear and centre cockpit sections were unmodified. The front section was modified to include curved side mouldings which are terribly obvious in photographs. These parts were used as the male mould. They were filled with Milliput so as not to cave in when put in contact with the hot acetate. Each part (a total of three) was then mounted on a brass rod, which set into the Milliput. This allows these parts to be held tightly in a vice until the hot clear acetate is stretched over them. Finally, the canopy framing was slightly lowered using 1200 gauge wet or dry sandpaper and the entire canopy polished using a rubbing compound. All clear canopy parts were then moulded.

From photos of the a/c being modelled, propellers all had the long pointed spinner. The MkIX prop was complete. As for the others, I only had one Hasegawa long pointed spinner so I hot formed the second one over the first and glued it onto the short spinner. All props have white metal blades.

Two sets of Paragon resin wheels and a set of Hasegawa wheels were used. I personally do not like the Paragon wheels, which are ridiculously overdone, as far as bulging goes and so I sanded down the sides to decrease the bulge. The kit wheels and one set of resin wheels were given hub covers since my reference photos of the real a/c show them as such. The covers were made from sheet aluminium cut with a compass cutter and detailed with a drill.

Spitfire wheel doors are not just flat sheets as supplied but these needed detailing including brake lines. The lower part has a particular wedge shape easily seen in a good close up photo. The part covering the wheel leg has raised edges which were also missing. 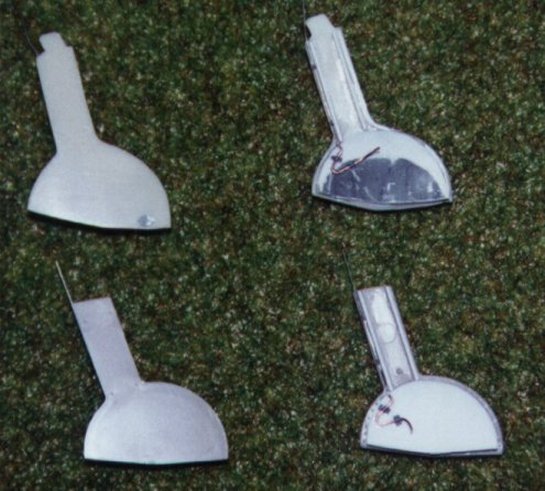 The Revell wheel legs cannot be used and a scratchbuilt set was produced using aluminium and plastic tubing and resin parts. The flaps are Eduard and the six stack exhausts are Warbirds white metal. To the standard Hasegawa exhausts were added the gun heating pipes. 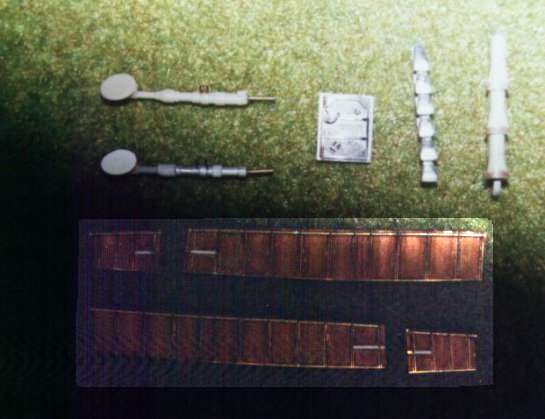 editors note: This photo was very dark. I highlighted the flaps as best I could. 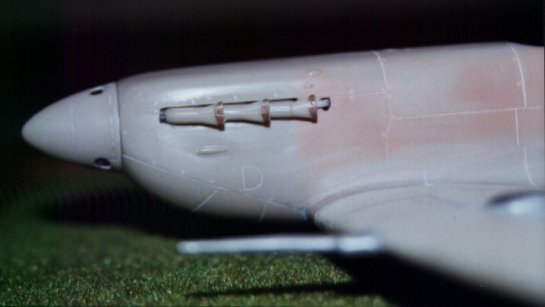 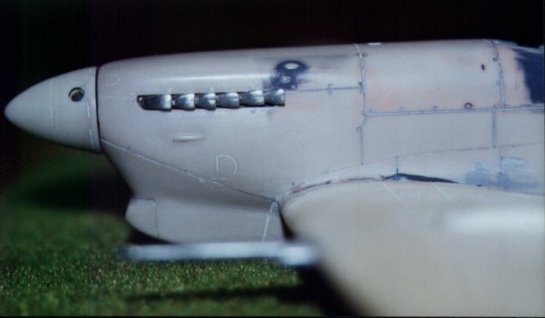 Finally, a few pictures of the complete models before undercoating: 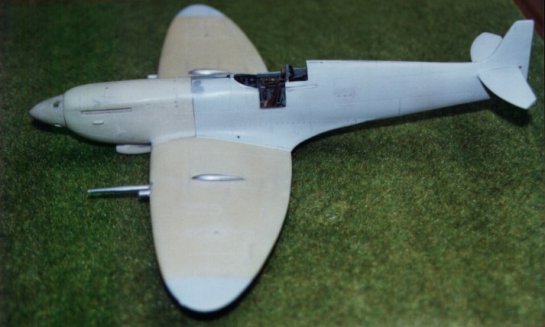 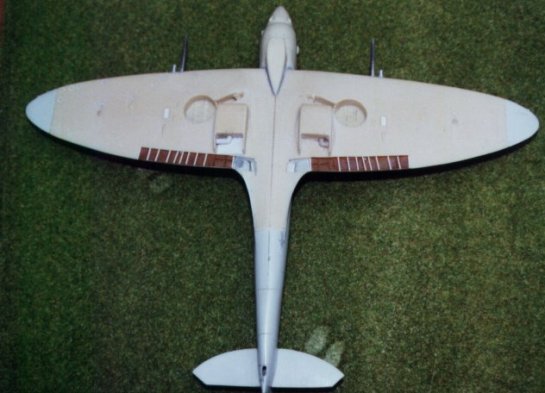 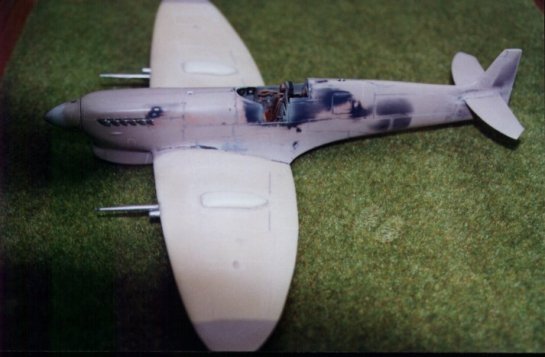 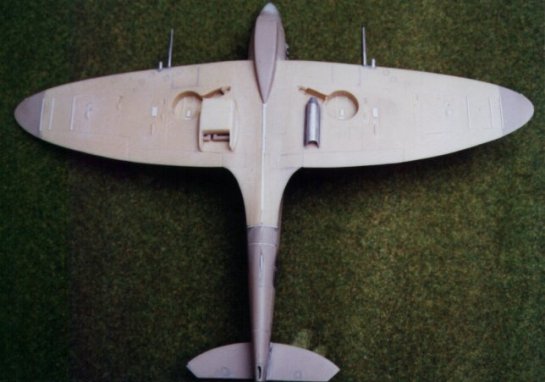 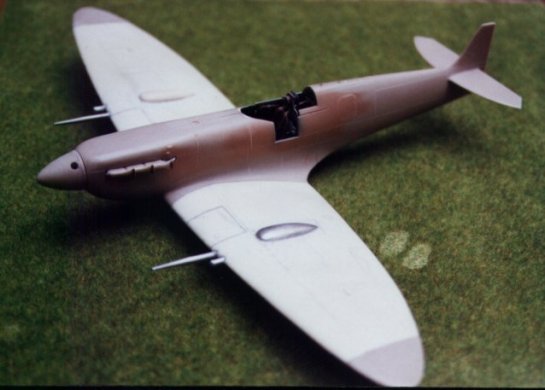 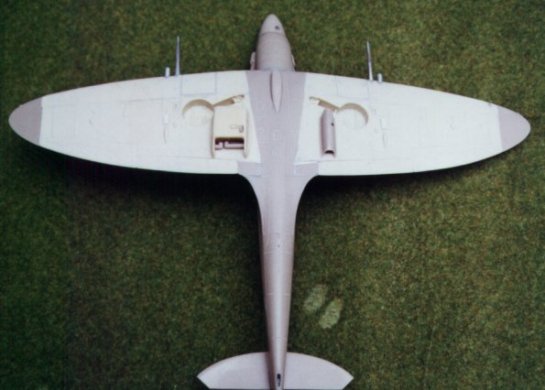 In Malta, the VCs were delivered with two cannon per wing but a pair were soon removed. There is no fixed rule as to which were removed but most photos show the outer pair missing and so I went along with this. The main reasons for removing these guns were: