Since I have already completed two 32nd scale spitfires as most of you know, I only decided to build more of these beauties because of their Malta connection. I have always loved the Mk IX and since one has been rebuilt at the Malta Aviation Museum, I have wanted to build a model of it. As for the other two Mk V's, these are in my opinion very interesting in that they have various differences and would look great sitting together on a shelf. Some of these differences are listed below:

The paint used in finishing the models is a mixture of Testors, Revell and humbrol paints. I will not repeat my normal painting procedure since this would be boring and may be found in my previous articles in detail.

No decals were used. I did not have any and did not bother trying to acquire any. The roundels were masked in the normal way already described in one of my previous articles, that of the Typhoon if I am not mistaken. Painting is in the normal way including shading and weathering. Fin flashes are comparatively easy to mask since they consist of straight lines so that Tamiya masking tape was used. The code letters were a different story and proved very troublesome. All were different sizes and PPH and SNA were of a particular size scaled down from the photos. I ended up using a very primitive system, which nevertheless gave very acceptable results. The letters were cut out from old flimsy typing paper. This was then dipped in water and placed on the model. Excess water was blotted off using a tissue and the paint immediately sprayed on. I managed to use each letter a couple of times before it became useless. Paint was heavily thinned to allow the air pressure to be kept as low as possible. Excessive air will cause the paper, to be lifted off. The actual spraying has to be quickly done since the process dries up the paper and this gets the tendency to lift off the model and let paint diffuse under the mask. 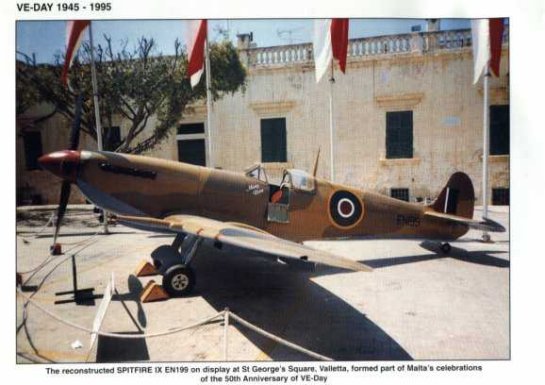 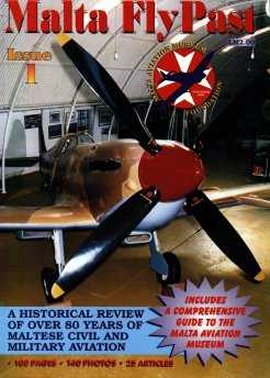 EN199 was built by Vickers Armstrong to contract number B.19713/39. It was powered by a Merlin 61 and was first flown at Eastleigh on 28th November 1942 and taken on charge by 12 Maintenance Unit (MU) on 1st December. On the same day, it was taken over by 82MU and eight days later it was moved to 47MU. From Glasgow, it was loaded aboard the MV Marsa and shipped to Gibraltar where it arrived on 13th January 1943.

It was first flown in action with 81 Squadron, which was the first to be armed with the MKIX in North Africa. Wing Commander Ronald 'Ras' Berry chose EN199 as his personal mount and it was coded with his initials, RB. This is the way in which my model is portrayed. During this time, the legendary Wing Commander Colin Gray also flew it.

EN199 was attached to the following Squadrons:

On 27th May 1947, the spitfire was presented to the Malta Air Scouts by Air Vice Marshall K.B Lloyd. At this time, it was placed at their headquarters in an open field. EN199 was painted in an all silver scheme with a matt black anti-dazzle panel on the nose. In a short while, the aircraft was subject to all sorts of vandalism and rapidly deteriorated until it was reduced to a pitiful state.

In 1955, it was taken over by the Civil Defence Corps to be used during their training. It was purposely left in a dismantled state to simulate an air crash in the open countryside. When it was no longer used, it was left dismembered for several years.

The aircraft has since been rebuilt and now rests at the Aviation Museum. Its reconstruction was completed in time for the commemoration of the 50th Anniversary of VE Day when it was exhibited publicly in Valletta, the capital city. It has since been completed in the markings of Wing Commander Ronald 'Ras' Berry who's official score was 14 + 10 shared destroyed, 9 probables, 17 damaged and 7 destroyed on the ground (see ACES HIGH) (RB,RB1,RB2,RB3,RB4,RB6) 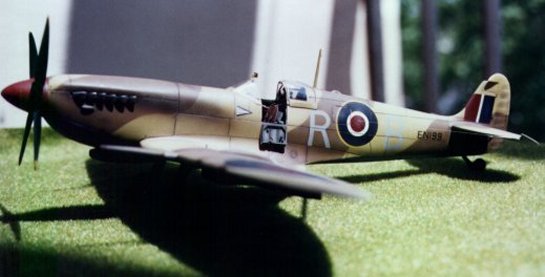 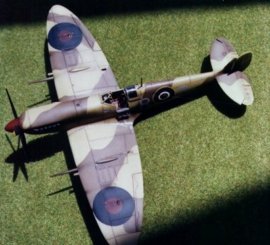 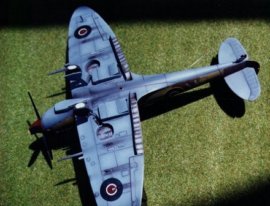 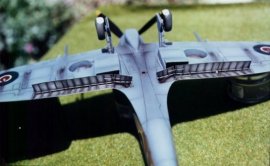 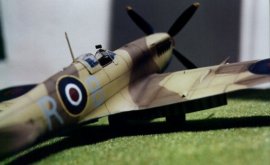 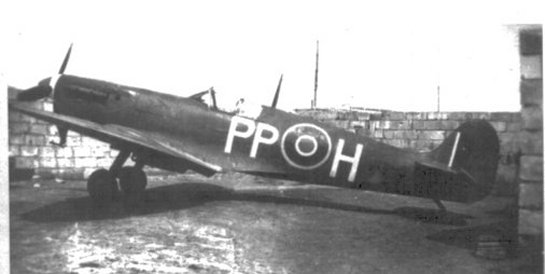 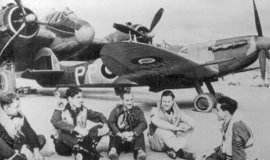 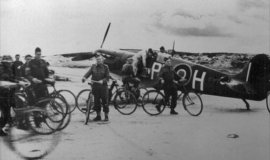 This spitfire VC bore the serial number BR498. The carrier HMS Eagle delivered this particular aircraft as part of Operation Baritone. It arrived in Malta late July beginning of August. Unlike most MkV's on the island at the time, this was not tropicalised. The photos showing BR498 bear a number of marked differences. The most common photo featured in the Osprey Spitfire V Aces book shows a very dark coloured PPH. The aircraft here is definitely not in desert colours and may be in either a temperate scheme or else in a grey/green scheme. Whatever the colour, there is no marked contrast between the two shades and it is also possible that the aircraft may have been overpainted in one shade as was the case with some aircraft in Malta. What this shade might have been is beyond the scope of this short write up. The spinner was probably red and white and it is to be noted that the exhaust stacks at this time were thea early MkI type and missing the gun heating pipe. In the other two photos, PPH definitely wears a topside desert scheme of Mid Stone and Dark Earth. Now, however, the spinner is all red and the exhaust stacks are the normal MkV type including the gun heating pipe. I think that these two photos were taken at a later stage. The underside is Mediterranean Light Blue and is markedly darker than Azure Blue.

BR498 was the personal mount of Wing Commander Peter Prosser Hanks during the second half of 1942. At this time he was OC of the Luqa Wing and this is where it was based. By this time, he was already a Hurricane ace and had seen combat with No. 1 Squadron in France before the battle of Britain. He was posted to Malta prior to October 1942. His successes with BR498 included the destruction of three Me109's and a Ju88. His final score was 13 + 1 shared destroyed, 3 shared probables and 6 damaged. 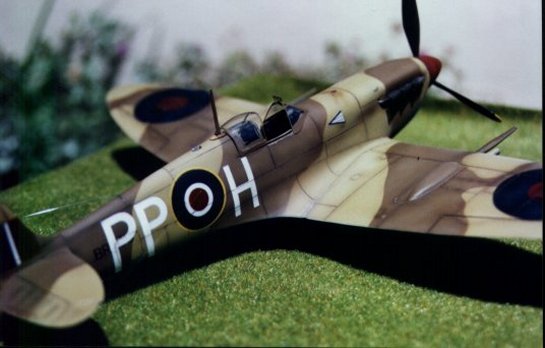 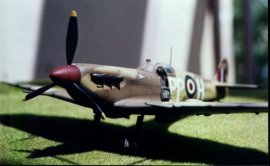 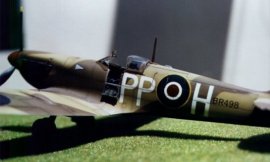 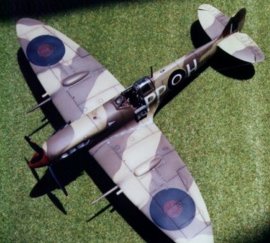 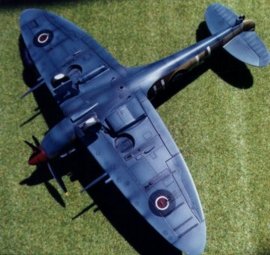 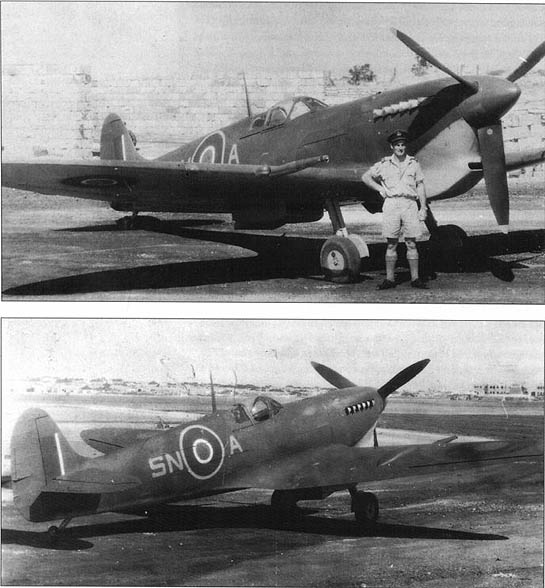 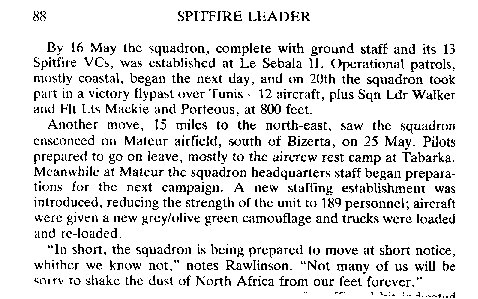 Squadron Leader Evan Mackie flew this aircraft when he commanded 243 Squadron. Born in Ortorohanga, New Zealand in 1917, Evan 'Rosie' Mackie was first assigned to No.485 'New Zealand' Squadron. In March 1943, he was transferred to No243 squadron in Tunisia. This is when he was assigned spitfire V JK715. At this time, the aircraft was painted in a desert scheme. However, before moving to Europe, the aircraft were painted in Grey/Green as described in his book Spitfire Leader (above photo). The squadron however stopped in Malta and was based at Hal Far. SNA had been his personal mount in North Africa and was his second MkV. He had lost the previous aircraft to friendly fire. Evan was a mechanic by profession and took a keen interest in his ground crew and the maintenance and upkeep of his machine. He had acquired a set of MkIX six stack exhausts which he fitted on his spitfire. This improved its performance and these were first installed in his previous machine. When this was lost, he quickly returned to the wreck and took them off to be fitted on his new mount. He ended the war with a tally of 20 + 3 shared destroyed, 2 probables and 10 + 1 shared damaged.

As for SNA, this was hastily painted in the field and this was done without masking. The demarcation was soft edged even between the top and bottom colours. The serial number was painted over. SNA did not carry a rear view mirror. Other points to notice are the squared off gun bulges unlike those on PPH. The model was first sprayed in a desert scheme and then the final camouflage colours sprayed over. Weathering included wearing off the top colours to reveal the previous scheme in selected areas. 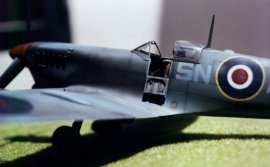 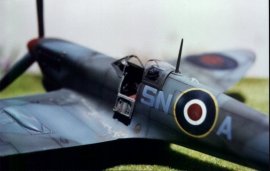 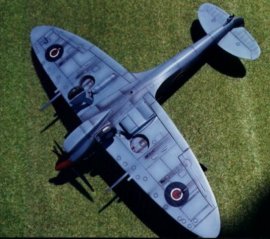 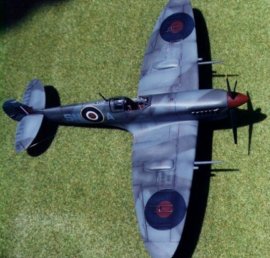