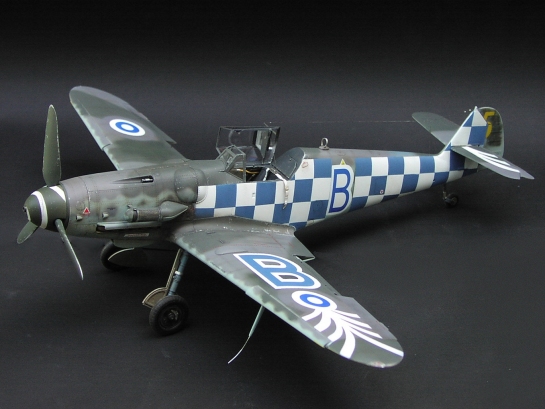 I had such a great time finishing my 1/32 Hasegawa Messerschmitt that I immediately began searching for another scheme for my next 109. I wanted to do a scheme that was "unusual" and not with Luftwaffe markings. When I finally ran across this scheme in a profile by Jan Mace I was hooked.

Of course during the research that followed the scheme took on new aspects and presented challenges around every corner. But I decided early on that no matter what I found out about this ship during the build, that the Mace profile was to be the heart and soul of the look I was after.

Shortly after finding this profile I ran across a project for skinning a flight sim (European Air War) over on the SIMHQ Bulletin Board, where a team had tackled this ship. It was here I found out why this Messerschmitt was decked out so boldly. 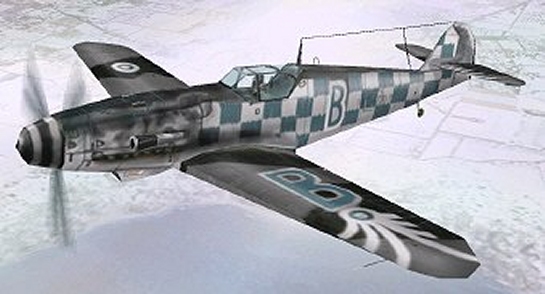 The Finnish air force used the Bf109 during WWII, and for quite a while after the war was over as well. The official designation for the BF190 in Finnish service was "MT" followed by a three digit number identifying the inventory/serial number assigned to that specific ship. A fantastic resource for the History of Finnish Bf109s can be found on the web at http://www.sci.fi/~fta/me-fin-1.htm so I won't take up too much space here.

MT-508 was a Bf 109G-6/Y high altitude interceptor version of the Messerschmitt. A long tail wheel, Erla Haube canopy and extended underwing antenna are the most notable cosmetic features of this version. The plane was assigned to HLeLv 31 after the Russian Armistice and participated in the "Mid Summer Air Festival" held at Utti Airbase in Finland in 1950.

It was for this event that MT-508 and 3 other 109s received flashy paint schemes for a "race" put on at the airshow using a pylon-type track. There is little other info on the other ships that participated beyond what I found in this indispensable volume by Kari Stenman and Kalevi Keskinen; "Messerschmitt Bf 109 G-6" (ISBN 952-5334-05-8). It is in that volume that I found this, the ONLY photograph known to exist of MT-508 in racing colors: 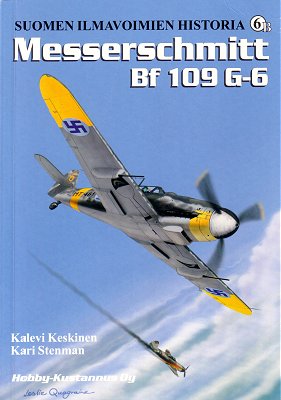 To say this volume was helpful would be an understatement. It not only has these images but gives a great view into the state of "MTs" after the war which helped me get the right level of weathering for my interpretation. You can find this book at the Kari Stenman Publishing webpage.

Within the Stenman volume is also this alternate profile. The third profile I do not have a credit for as I received it without a proper resource attribute.

With the above resources in hand, and a mandate to myself to stay true to the Mace profile I came up with the following interpretation of MT-508. One thing to note is that while the markings in the photo and the above two profiles are crude, I made a choice to "straighten" them up, especially with regards to the checker pattern. In the Mace profile the checkers are much more regular and trued than the actual paint job probably was. However ultimately we must build and paint what moves us, and spending long hours replicating a sloppy checkerboard did not move me.

Trumpeter kit is well engineered so the build went fairly smooth and as such there's not much to tell. A few items needed to be scratch-built to represent the 6/Y but nothing too fancy. Some creative trading got me most of the parts I needed and all I had to fashion was the tropical filter, the distinctive "Galland Panzer" armored headrest, the DF loop, and the underwing antenna. 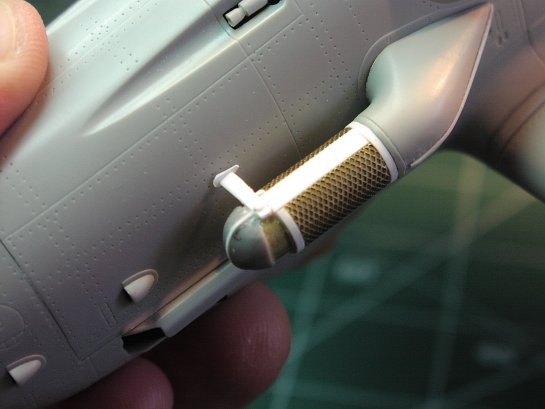 Tropical Filter made from sheet plastic, brass screen, and a spare 500lb bomb in 1/32 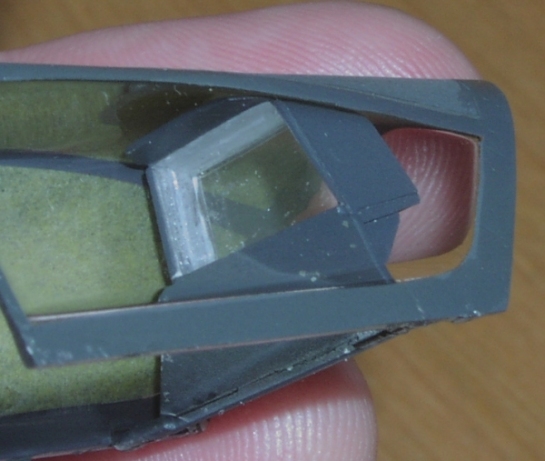 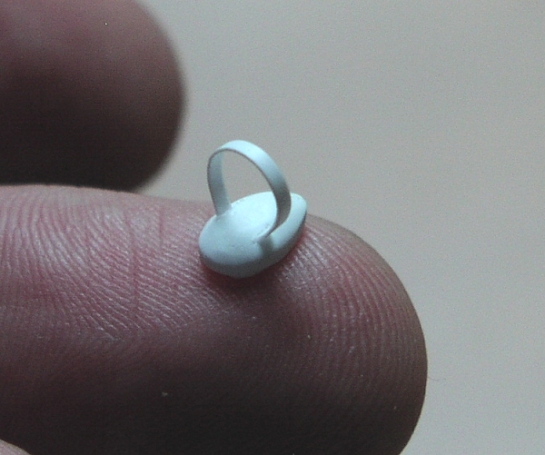 DF loop, all plastic sheet, the base formed with a Dremel.

The excellent "Luftwaffe WWII Fighter Harness" set from MDC was used with great results, and beyond that and the notes above, the build was OOB.

Well this is where the rubber meets the road on this build.Having such a unique scheme this ship required lots of planning and thinking.

Basic paint scheme was standard Luftwaffe RLM 74/75/76, all shot with Polyscale Acrylics through a Badger 150 using the medium needle and tip. After the camo I hand-sprayed the "covered" Luftwaffe markings (crosses and swastikas) with RLM 80 and 76 (top and bottom). Then moved to the "covered" war-time Finn roundels with RLM 75. 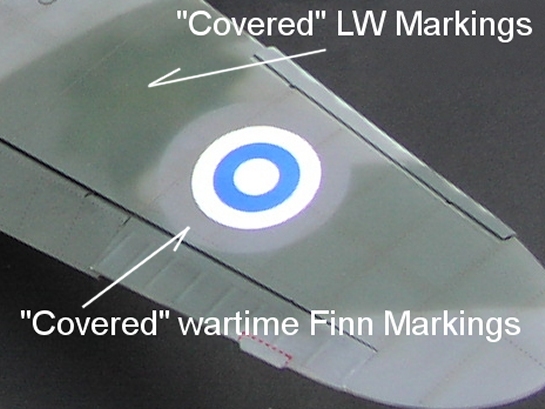 The exotic racing markings consisted of the blue and white checkers, the blue and white "B"s and the distinctive wing and stabilizer designs in white. I used a few different techniques here and used Tamiya "Gloss White" enamel from a spray can for the white areas to offer a hard resilient base for the blue, which was done with Polyscale acrylic. Most of the racing markings were done with hand cut masks and masks from Aeropoxy.

The center Blue roundels were home made inkjet printer decals, and all the stenciling was done with the excellent dry transfers offered by Hobbydecal.com.

Detail of the dry transfer stencils from Hobbydecal.com

Weathering was done with oil paint washes of Umber and Black, some dry pastel dusting in earth tones, and paint chipping was done with a Primsmacolor Silver pencil except for the propeller blades which were done with Testors Model Master Buffing Metalizer, sealed with Future Floor Wax, then painted with Polyscale acrylic RLM 80, and finally chipped with a sanding stick.

The model was photographed with a 2.1 MP Olympus C-2040ZOOM digital camera mounted on a tripod, outside in the shade on a sunny Texas afternoon sitting on a sheet of old black contact paper. No lights were used. 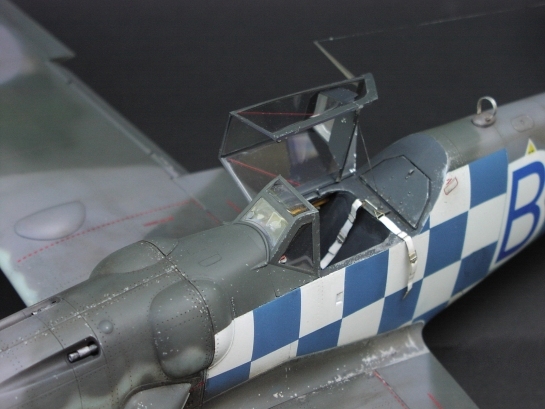 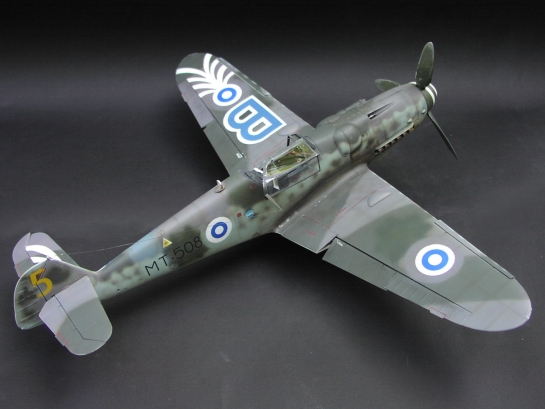 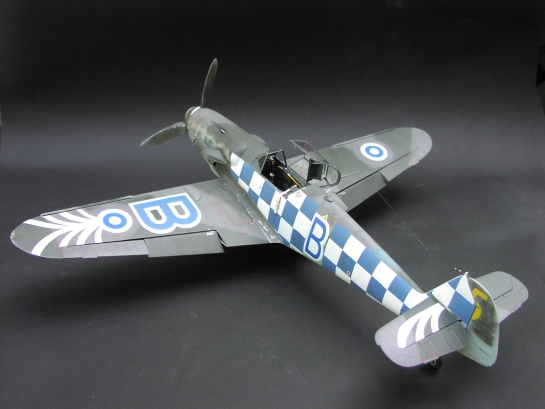 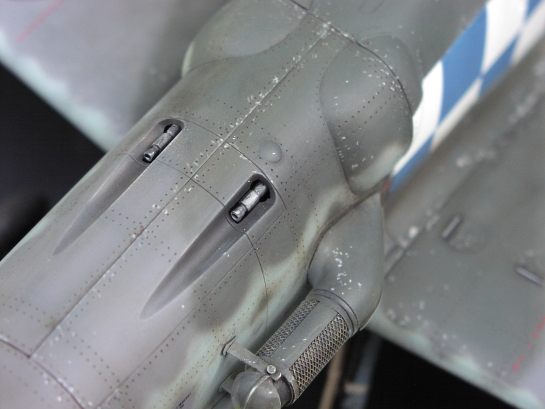 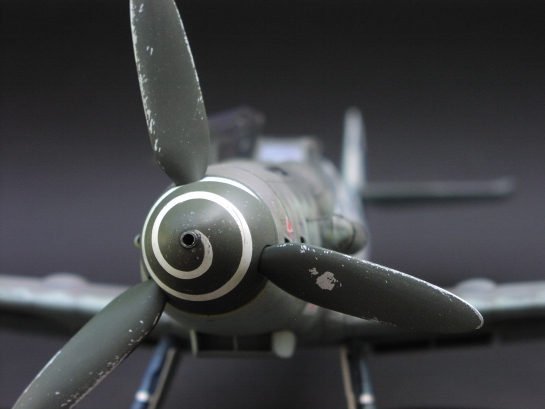 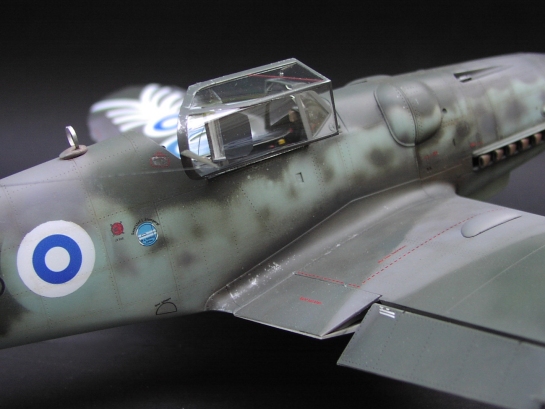 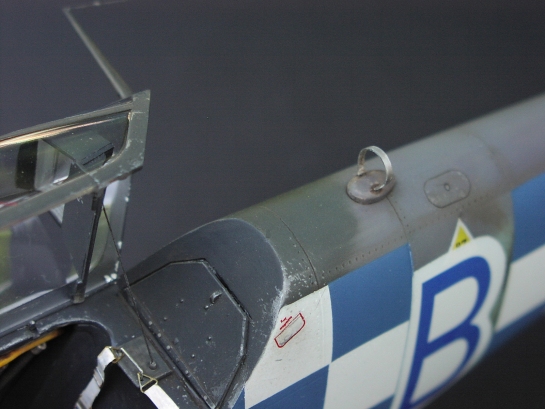 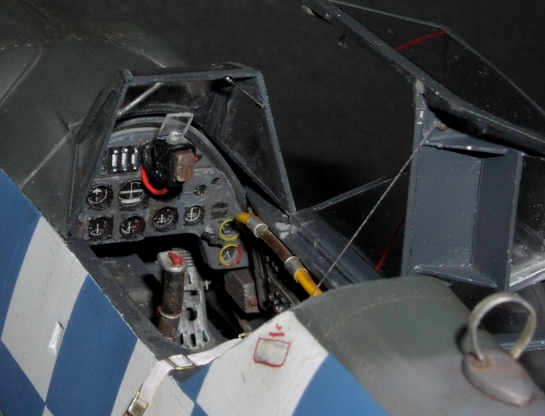 (only photo lit with a flash from the Olympus) 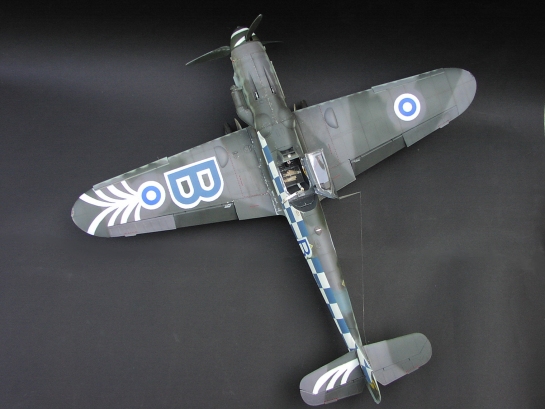 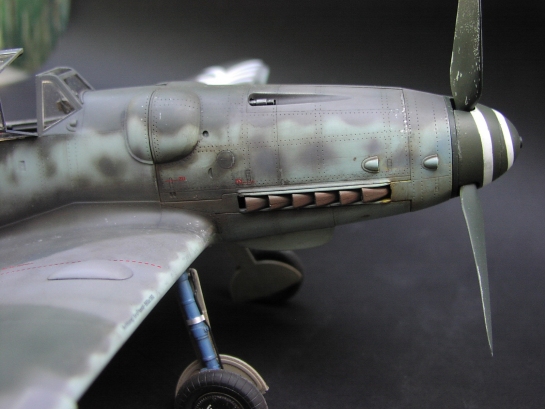 I tried a few new techniques on this build, and got hooked on 1/24 in a big way. I'm looking at my stash of unbuilt 1/32 kits for my next build, and I find myself saying: "they're so small!" Hmmm, this could get tricky.