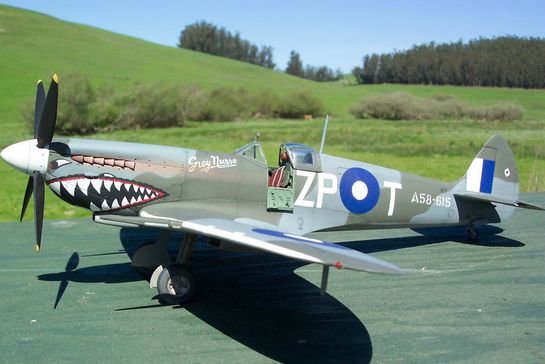 This model depicts a late war Spitfire MK VIII of the RAAF 457th Squadron at Morotai in the East Indies. I had always wanted to build a Grey Nurse spitfire, and had procured the 1/48 scale Aeromaster sheet. I hadn't considered doing one in 1/32 scale until Warbirds had announced a contest here on LSP at the end of 2003. 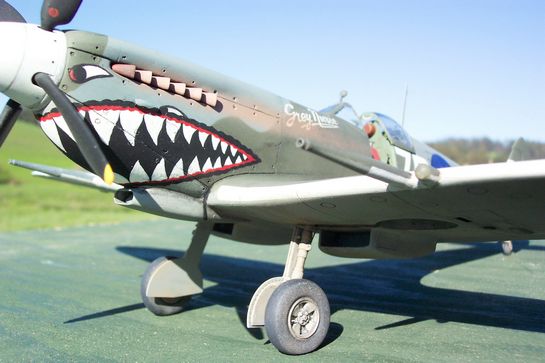 At the starting point, I had a Hasegawa MK Vb kit, an Eduard Photo etch interior set, and the Warbirds MK VIII conversion set, as well as a set of Warbirds "C" wings. After gathering what reference I could, I decided a Grey Nurse could be done if I made decals in 1/32.

I decided to use the Warbirds resin C wing set after comparing the kit wings. The work involved with bringing up the kit wings would have been significant. The shape was more correct looking to me as well. The only requirement for the resin wings was to make the shorter Ailerons, drill the cannon and gun holes, and graft the kit wing tips to them.

While working the wings, I cut the kit wing bottoms from the center (Belly part) along the panel line, and glued the resin ones to it while checking alignment. The fit was very good with minimal trimming of the resin on the inside. 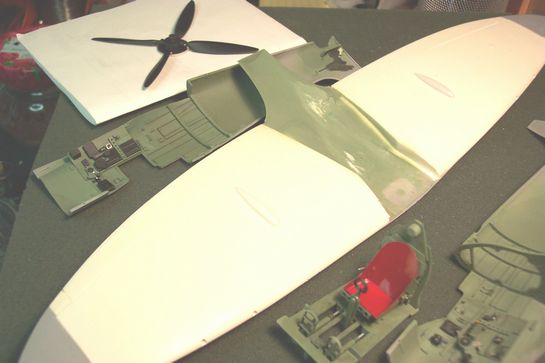 After making the wing assembly, I cut the kit fuselage for the resin nose and rudder set. That way I could check fit and adjust as necessary at that point. I drilled out the solid resin nose to shed weight, as the solid wings were enough to test the landing gear. I measured everything 16 times, and cut once. Knowing the gear would be stressed, I drilled through the kit ones, and used steel rod that goes into the resin wings. 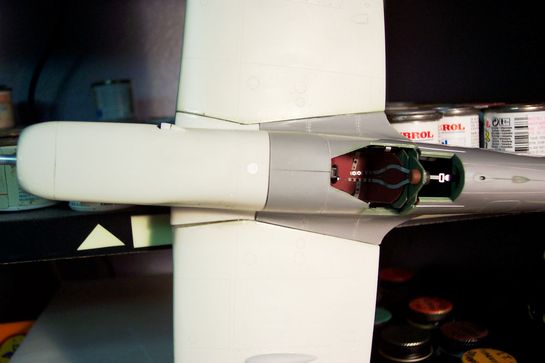 The kit windscreen was modified by adding a thicker piece of clear sheet on the inside as armor glass (with stretched sprue to replicate the bolts along the side). For the cockpit besides using the Eduard set, I opted to go with the kit instrument panel. I replaced or added switches, but thought it was pretty good. For gauges, I paint the whole panel enamel white, then acrylic black, and scrape the black away with a needle. Then fill it with Future.

From references, I made placards from foil painted black. I made the pilots oxygen hose from guitar string, added ribbing to the rear fuselage section. All kit fuselage parts were rescribed to match the resin, and canopies given the future treatment. The Warbirds exhaust were drilled out, and thinned to shape with a hobby knife. For the chin intake, I added a plastic dust door, and opened up the cannons. The tail wheel was molded with the strut, so I cleaned up the yoke, and removed the excess resin. 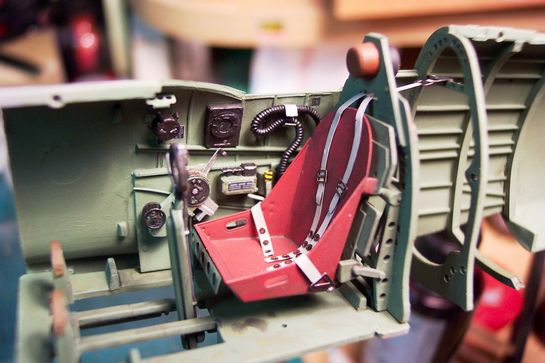 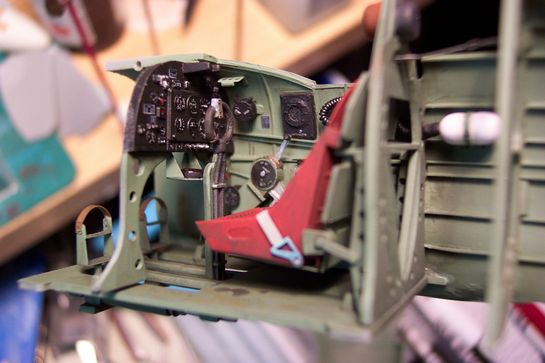 I found that I was on my own with the markings. Even when the Aeromaster decals were enlarged, they had problems. The mouth was incorrect, and the copies of the script were too transparent to use. I hand painted the markings on the sheet over the decal, and hand painted the mouth using pictures found on the Australian War Memorial website as reference. While studying the website photos, I found that there was a smaller mouth painted on the 457th at an earlier time. When the bigger mouth was painted on, they left the previous set of eyes on. They were located just below the exhaust, and can sometimes be seen peeking over the mouth. 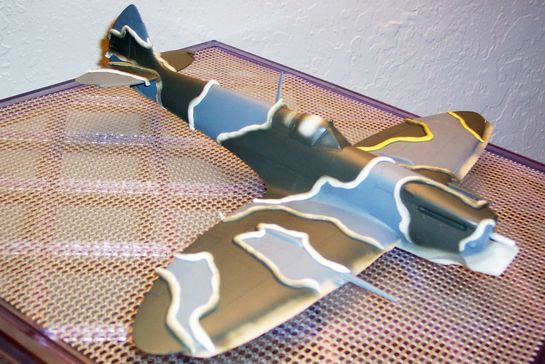 The roundels were cut out with scissors from solid decal sheet, and the white fuselage codes were resized from the letters from the Microscale sheet 32-008. For stencils, I used the ones from the kit.

Paint used was Humbrol throughout. I used the satin tins to minimize clear coating for decals. I first painted the wings leading edges with white, then masked them with tape. I painted the bottom Grey, and masked the fuselage edges. For the top camouflage, I used the rolled up poster tac method of masking. 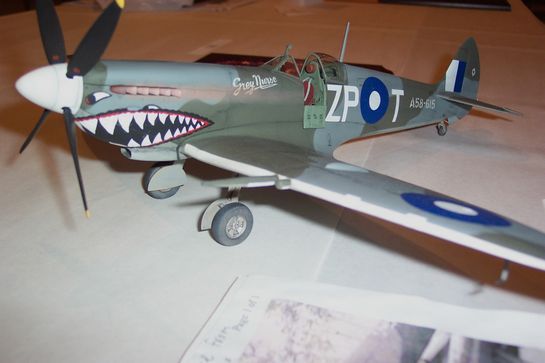 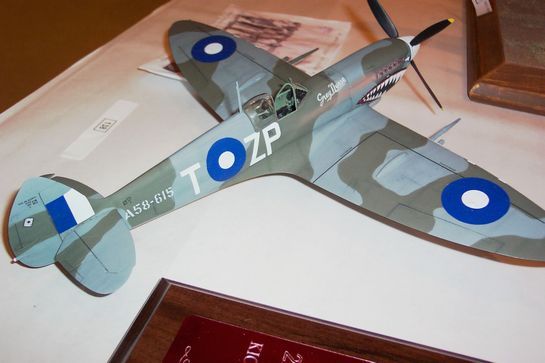 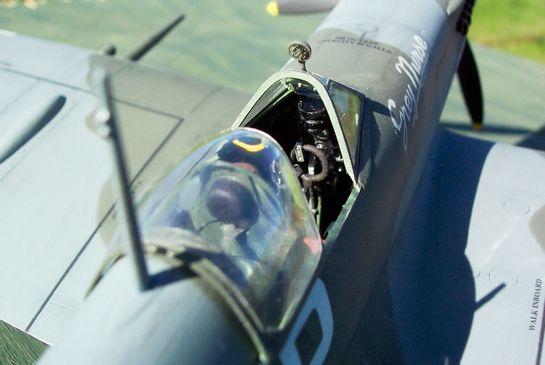 For weathering, I airbrushed a slightly darker version of the color along the panel lines. After clearcoating again with future, I used an acrylic black-brown wash thinned with distilled water and soap. I like the control I have with this method. Final dullcoat was with Humbrol flat in the square bottle.

Although started for a contest that never occurred, I'm glad I got this one done because I don't know if it would have been built for years, or as a Grey Nurse. I learned a bit about the 457th squadron as well. For photos, I used my Kodak Easyshare DX 4330. 38-114mm lens at a local setting. 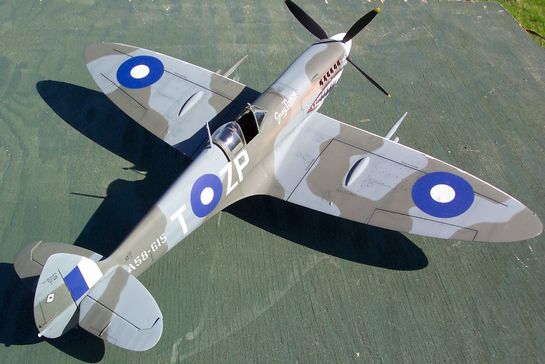 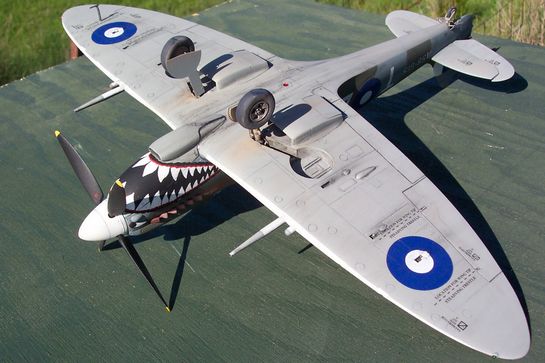 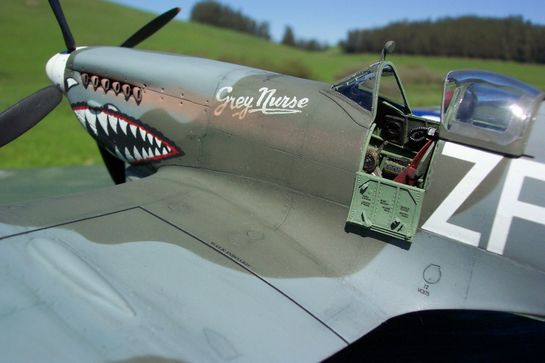 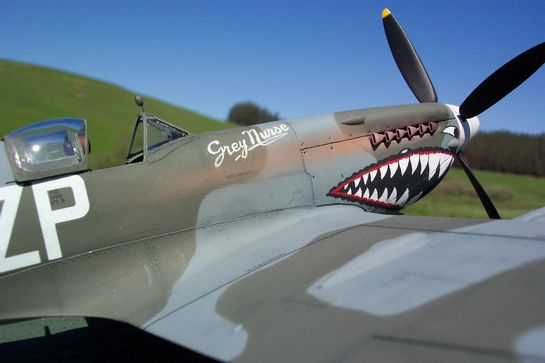 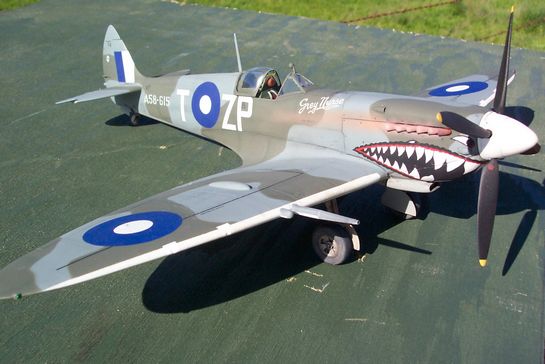 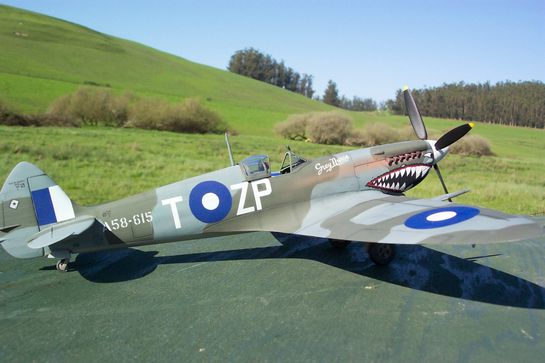